FACEBOOK BANS TOMMY ROBINSON, FALSELY CLAIMING HE CALLS FOR VIOLENCE AGAINST MUSLIMS
BY ROBERT SPENCER
SEE: https://www.jihadwatch.org/2019/02/facebook-bans-tommy-robinson-falsely-claiming-he-calls-for-violence-against-muslims; republished below in full unedited for informational, educational and research purposes:
A Muslim activist in the UK is claiming credit for this:

Mohammed Shafiq ✔@mshafiquk
I can reveal I recently had a meeting with Facebook to discuss #TommyRobinson pages and their impact in brainwashing his supporters to become terrorist and use violence against Muslims. A very good result and I am proud of my role.
365
7:32 AM - Feb 26, 2019
Twitter Ads info and privacy

1,195 people are talking about this
However, Tommy Robinson says: “…the reasons they’ve given are just complete lies. They’re saying I incited violence and that I openly called for violence against Muslims, that’s just a lie. If that was the case then they could show evidence of messages where I’d said that but I never have.”
Whatever you may think of Tommy Robinson, fascists such as Mohammed Shafiq are not going to stop with him. It will soon be impossible to voice any opposition to jihad mass murder or Sharia oppression of women, gays, and others on any social media platform. Then the jihad will be able to advance unopposed and unimpeded, which is the ultimate goal of all these efforts to silence critics of jihad terror. 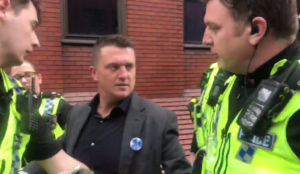 
Facebook has banned British citizen journalist and street organiser Tommy Robinson from its platforms, including Instagram, in a move that comes days after he released a new documentary exposing what he claimed to be dishonest practise at establishment media giant BBC.
The social media giant claimed in a statement published Tuesday that Tommy Robinson’s own Facebook page, which had around one million ‘likes’ before deletion, “has repeatedly broken [Facebook community] standards, posting material that uses dehumanizing language and calls for violence targeted at Muslims. He has also behaved in ways that violate our policies around organized hate.”
Facebook claimed the move “is not a decision we take lightly.”
Responding to the ban, English Defence League founder turned citizen journalist Tommy Robinson told Breitbart London: “…the reasons they’ve given are just complete lies. They’re saying I incited violence and that I openly called for violence against Muslims, that’s just a lie. If that was the case then they could show evidence of messages where I’d said that but I never have.
“This is continued censorship which we all knew was coming but its been done instantly because of my documentary which exposed the establishment working with Hope not Hate, working with the BBC in order to destroy my name to the nation. When I exposed what they were doing they’ve put down the pressure to completely delete me from the internet. This has to show people the levels they’re gonna go to silence any opposition to mass migration and the Islamisation of this nation.”
Robinson’s removal from the platform is only the latest in a series of bans targeting the campaigner in recent years. He was de-platformed by Twitter in May 2018, bannedfrom receiving payments by Paypal in November of that year, and had Youtube videos blocked from earning revenue in January 2019.
Mr Robinson told Breitbart London that he would be working on his own mobile app for live streaming after his removal from several social media sites.
It is not clear what actions were taken by Mr Robinson’s social media page in the recent past to cause Facebook’s decision to remove him now, but the move does come just days after he released an exposé documentary claiming to reveal underhanded dealings at British state broadcaster the BBC. In the hour-long film, which Robinson uploaded to his Facebook page, it is alleged the BBC collaborated with far-left activist organisation HOPE Not Hate to create what was apparently called a “Tommy Takedown”.
Robinson’s film debuted at a protest he held in Manchester, England, outside the offices of the BBC where the Panorama documentary series is produced. Thousands are reported to have attended the heavily-policed event.
In the film, top BBC documentary maker John Sweeney can be seen being confronted by Robinson with undercover footage of him making apparently racist and classist statements. It is believed at least some of the claims and counterclaims between Mr Robinson, the BBC, and HOPE Not Hate may yet be contested in court.
Responding to the ban, Tommy Robinson ally and UKIP leader Gerard Batten said the rise of censorship showed the nation was headed towards a “dark place.” He said: “Without any explanation whatsoever, the personal Facebook accounts of key UKIP members and Tommy Robinson have been removed….