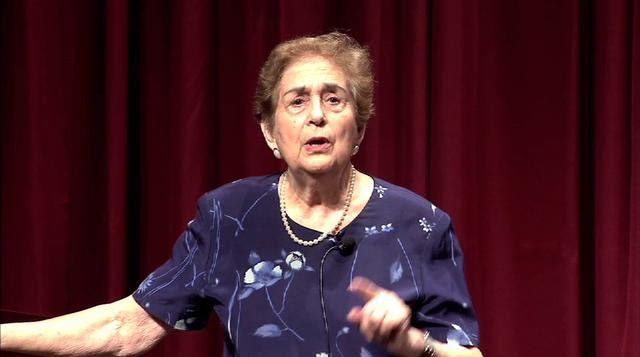 To Deny A Teacher's Request For A Holocaust Speaker:

SEE:
http://mothercrusader.blogspot.com/2014/03/parent-fights-principal-who-uses-common.html; republished below in full unedited for informational, educational, and research purposes:

Below is a guest blog from a dear college friend of mine. I've known for quite some time that she is passionate about Holocaust education, both speaking to students herself and also arranging to bring Holocaust survivors into schools. And I've always known that she is one tough cookie.

I was shocked when a little more than a week ago she started posting on Facebook about a principal who denied a teacher's request to have a survivor speak to 8th graders, and used the Common Core as the rationale for his frighteningly bogus decision. I was not shocked that she decided to put up a fight. I immediately asked her to consider writing up her experience as a guest blog, and she graciously accepted.

I want to thank her for her steadfast resolve in bringing this rich curricular experience to students. Without people like her, who have sincere passion for such a vitally important topic, I fear strict adherence to the Common Core standards will deprive our nation's public school students of experiences that make them not just good test takers, but caring, compassionate citizens.

Here is her story.

My name is Andye Daley. I am a mother, an educator, past vice president of The Holocaust Education Center of the Delaware Valley Board of Directors, and on the Board of Directors of Jewish Family Services of Delaware. I am also a strong believer in Holocaust Education. I feel it is vitally important as it pertains to teaching our young middle school and high school students.

I have been weighing out my feelings on the Common Core Standards for the past few  months.  I thought perhaps the standards could be beneficial to our people, but now I have seen first hand how the implementation of the Common Core is slowly taking the humanities out of our schools.

Just last week I had to push back firmly on the misguided actions of a principal. An Appoquinimink district teacher asked me to see about getting a Holocaust survivor to speak to the 8th grade student body at her school as I had done the year before. I was very excited to help. Imagine my surprise to get an email an hour later saying I should hold off on securing the speaker because she got "shot down about having a survivor to come” by her principal.

The principal’s reasoning was, “What Common Core Standard are the kids learning by listening to her?”

The teacher pleaded and was denied. She felt it was no longer about the life lesson or experience, but rather about the Common Core. The principal went on to say that they were not there to teach about the Holocaust because ”they will get that in high school.” The teacher also wanted to show Oprah at Auschwitz, a 45-minute video, and while the principal felt there was no applicable standard associated with this activity, he ultimately approved it while still denying the speaker.

There was no way I was going to let this principal’s interpretation of the Common Core Standards stop a survivor from speaking to students.

My first call was to the Delaware Department of Education, where I spoke with the person in charge of ELA Curriculum, Instruction, and Professional Development for the state, and therefore oversees Common Core. She told me that each district can "interpret" Common Core and that it seems the principal took the most literal interpretation he could find.

I asked what oversight the DOE had over a district's interpretation of Common Core and while she said that if she feels a district is misinterpreting the standards she could intervene, she stopped short of offering to make a call. She did say she would call me back to see what happened, but as of now I have yet to hear back from her.

I then contacted a dear friend of mine who not only trains principals and supervises them, but is also the child of survivors. Here's what she had to say:

I rarely do this kind of thing but I have to give a shout out to my friend Andye Daley. As many of you know, my parents are Holocaust survivors. Time is passing, the years are taking their toll on the survivor community. In the not too distant future, we will no longer have eyewitnesses who can share their experiences, and in doing so, make the most important impact on educating future generations. It is so important to do this now, to engage young people in genuine conversations with those who were there. Andye is a mother, an educator, an activist and a truly passionate person. She is fighting a very good fight right now against a very ignorant, uninformed and misguided principal in her Delaware school district, who, among other things, thinks that having a guest speaker come to his school is "not common core aligned." It is literally making me nauseous, as an educator, a Jew, the child of survivors, a principal, a teacher and a lover of authentic, rich curricular experiences for students, to imagine that there is a school leader out there who interprets common core this way. There are layers and layers of issues here…but I just have to thank Andye. This daughter of a Dachau survivor is beyond moved that she is standing up for what is right. Thank you Andye for doing what needs to be done to make sure the stories are told before it is too late.

Two nights later the principal contacted the teacher, fearful that I had been posting about the matter “all over Facebook.” This felt to me like the principal’s attempt to get me to back down.

“Not gonna happen” I informed the teacher.

I met with the principal and the asst. superintendent for about an hour and a half. I asked him to explain, in his own words, what had happened. It was apparent to me that there was a lack of judgment on his part when he told the teacher that she could show a video of Oprah interviewing Eli Wiesel at Auschwitz, yet not give her the approval to have the survivor come to speak to the entire 8th grade. He said he thought the video would suffice for "historical reference."

I asked why this was his choice over an actual first hand account with a person who could hold a question and answer period on the subject. "How is a video able to answer questions that come up better than someone right in front of them?" I asked. After hearing the speaker, the students could ask questions, write an account, do research - all Common Core Standards.

This went on for some time.

I then took the opportunity to bring up his interpretation of the Common Core Standards and how our administrators need to do a better job in relaying to principals and teachers that while there may be good aspects of Common Core we need to couple them with the ability to reach outside the standards to make sure the humanities are not lost.

Both agreed. This also went on for some time.

I am really struggling with how the Common Core can be used to squash the passion of our teachers. How it can create roadblocks that inhibit teachers from maintaining their love of teaching. How can you have students who are passionate about learning if you have teachers who are told not to be passionate about teaching? One has a direct effect on the other.

As we left it, the principal was to reach out to the 8th grade team of teachers. It was my hope that I would quickly get a call telling me to go ahead and schedule a Holocaust survivor to come and speak to the 8th graders.

The next day at about 1pm that call came!

This is a great outcome, and I am hopeful that the principal has learned from this experience. Below is the email I sent to him, cc'd to the superintendent and asst. superintendent.

“Thank you for agreeing to have the Holocaust speaker address your 8th grade. I know that the students will get so much out of this experience. I want to just go over a few details. I have given you the contact information below on who to call to set up the speaker. I have also agreed to help in the transportation of whichever speaker you get, as they are up in age and do not drive.

Understand that this is quite an undertaking for these survivors and speaking more than once a day is really out of the question. Therefore, having them speak to the entire student body at your school will not happen. That is one of the reasons I initially said that she or he would only be speaking to the 8th grade.

Let me know as soon as you have a confirmed date so I can free up my calendar so that I can pick up and drop off the speaker.

Thank you again I look forward to helping facilitate this very beneficial event for your 8th grade students.

I see the Common Core Standards as a guideline for educators, but when interpreted too literally we lose the very idea of how standards are to be used. Teaching about the Holocaust can teach our youth so much; everything from tolerance and the dangers of stereotyping, to inspiring them with the heroic actions taken by those in dire straits.

UPDATE: In less than 48 hours this post has been shared over 100 times from my original Facebook post, and has been viewed on this blog over 4,500 times. This kind of reach may be typical for Diane Ravitch or Jersey Jazzman, but not for my little blog.

The idea that the Common Core could be used as the rationale for denying a teacher's request to bring a Holocaust survivor into a school, is unnerving. Some have pointed out that the principal was wrong, that the Standards could and do relate to such lessons.

To me, this misses the point.

That the principal used the Common Core Standards, rightly or wrongly, to deny this vital experience to students, an experience that will all too soon not be possible as survivors age and their numbers dwindle, is significant.

It is an extreme example of what many fear we will lose when we "standardize" what our children are expected to learn. As Andye so rightly said, we are likely to take the humanity out of our future. A dangerous precedent, indeed.

Thanks to Andye's hard work and determination, Holocaust survivor Anne Jaffe will be speaking to 8th grade students in the Appoquinimink school district in Delaware. Here is a video of Anne giving a lecture to Villanova students.

Anne's story must be told.

Posted by John at 4:01 PM Links to this post