ANSWER TO FEAR MONGERING JOE BIDEN: IT'S YOU, OBAMA, AND THUG GOVERNMENT WE CAN'T TRUST!~STAGING & THEATRICS CREATE THE JUSTIFICATION FOR TYRANNICAL CONTROL 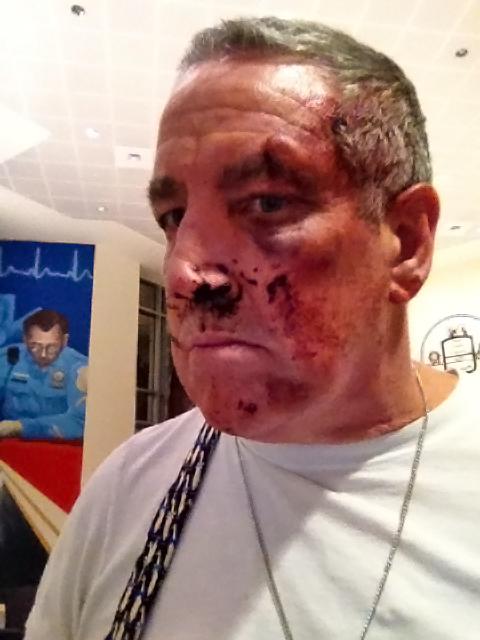 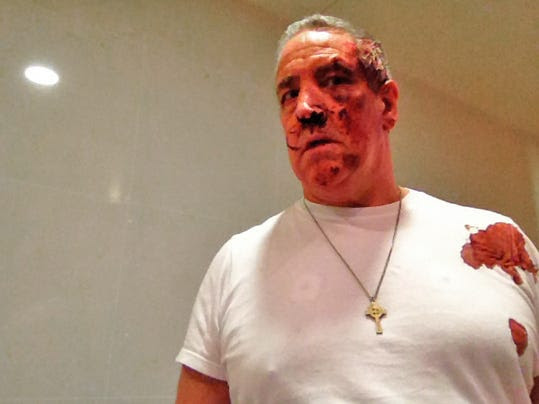 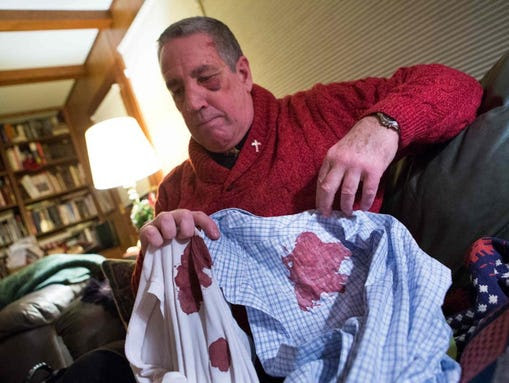 SEE: http://www.delawareonline.com/story/news/local/2015/01/19/greenville-man-charged-police-probing-biden-shooting/22022917/;
EXCERPT: "In an interview with The News Journal, Peters said he was beaten by police, and left with a swollen nose, rib injuries, multiple face abrasions and a black eye. Peters provided pictures documenting his injuries. "They beat the daylights out of me," said Peters, who insists he did nothing wrong. He also denies being connected in any way to the shooting incident.
The officer grabbed Peters by the back of his head and forced him to the ground. Both officers on the scene then struggled with Peters, attempting to gain control of his hands. As Peters was being taken to the ground, one of the officers struck him in the shoulder, neck and head area with his knee, according to the police affidavit.
"And that point, without saying a word, he cold-cocked me," Peters said of one of the officers. The freelance writer said he went down to the ground and an officer put a "death chokehold on me. I thought I was going to die right there."
Right before he passed out, Peters said the officer released him, then took a knee to his back, shoving the left side of his face into the ground. Peters added he repeatedly said "I can't breathe, I can't breathe," and thought of Eric Garner who died in Staten Island, New York, after police placed him in a chokehold.
"Same thing that happened to Eric Garner, happened to me," he said. "It was deja vu all over again."
Peters said he comes from a family of law enforcement so this was surprising."
_______________________________________________________
SEE: http://rt.com/usa/224283-delaware-man-police-beating/;
EXCERPT:
"A Delaware man said that local police violently accosted him before he was arrested, as law enforcement official investigated reports of multiple gunshots near the home of Vice President Joe Biden in Greenville, Delaware.
There has been an ongoing investigation into the shooting incident near Biden’s home, but the man, Rock Peters, was arrested roughly 30 minutes after the gunshots were reported. Peters said he was left with a swollen nose, rib injuries, multiple face abrasions and a black eye after New Castle County police beat him.
The incident occurred on Saturday night when Peters had been driving in a car near the entrance to Joe Biden’s estate, as officers were closing traffic after reports of the gunfire incident. An officer advised Peters to turn around, but Peters told him it was the only way he knew."
_____________________________________________________________
DELAWARE'S MILITARIZED POLICE BUILD UP:

DELAWARE'S HEAVY EXPENDITURES FOR
CHEVROLET MILITARIZED UNMARKED & MARKED VEHICLES
FUNDED BY THE FEDERAL GOVERNMENT;
(THEY ALL HAVE THE SAME HIGH GLOSS BLACK WHEEL RIMS WITH FLASHING LIGHTS INSIDE) 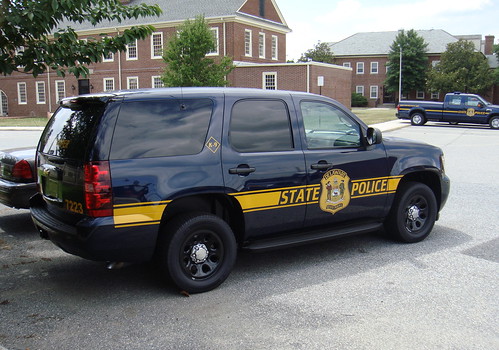 'Can You Trust The World'

BIDEN RATIONALIZES WHY GOVERNMENT MUST BE YOUR LORD, MASTER, PROVIDER & PROTECTOR?
WOULD SHOTS FIRED NEAR HIS SECRET SERVICE PROTECTED UPSCALE ESTATE HOME
IN THE POSH SUBURBS OF GREENVILLE, WILMINGTON, DELAWARE
HELP THE CAUSE FOR BUILDING A MASSIVE POLICE STATE
AND UNIVERSAL GUN CONTROL/CONFISCATION?
Published on Jan 19, 2015
US Vice President Biden Asks 'Can You Trust The World' in Martin Luther King Speech

(Reuters) Speaking at an MLK, Jr. memorial event, VP Joe Biden comments of the dangers in America today, saying a parent may worry about their child possibly getting hit ''with a stray bullet from a drive-by shooting by some gang-banger.''
U.S. Vice President Joe Biden honored late civil rights leader Martin Luther King Jr. during a Monday (January 19) morning event at the Organization of Minority Women in Delaware. He spoke of the dangers faced today in America, posing the question; "Can you trust the world with the person you love so much?" "When your child walks out that door, you have enough to fear, you have enough to contend with -- the possibility that they may be in an accident, an automobile accident. They may fall victim to an act of crime or hit with a stray bullet from a drive-by shooting by some gang-banger," said Biden. Gun shots rang out from a passing vehicle near Biden's residence in Delaware on Saturday night, but the vice president and his wife were not at home, the U.S. Secret Service said on Sunday. The shots were fired on a public road several hundred yards from the house, outside a security perimeter, at about 8:25 p.m. EST. Secret Service personnel at the residence heard the reports and saw the vehicle speeding away. The home, near Wilmington, is not visible from the road, and it was not clear whether the gunfire was random or aimed in the direction of the residence.
video footage caught on tape cellphone camera surveillance raw dash cam air live on tv

America honors Martin Luther King with a wreath laying and prayer service led by his daughter amid messages of 'vigilance and nonviolence'
President Obama and wife Michelle will help with a project at the Boys & Girls Clubs of Greater Washington while observing the day
Faith, community and political leaders gathered at historic Ebenezer Baptist Church in Atlanta to celebrate King's legacy where his daughter, Rev. Bernice King, urged people to remember his message of nonviolence

Faith, community and political leaders gathered at the historic Ebenezer Baptist Church in Atlanta and other events across the country to celebrate the legacy of the Reverend Martin Luther King Jr.
President Obama honored the birth of civil rights leader by participating in a community service project. The president and wife Michelle were helping out with a project at the Boys & Girls Clubs of Greater Washington.
The organization helps youngsters develop the skills they need to become responsible adults. In a proclamation issued last week Obama said the U.S. has made 'undeniable progress' since King agitated for justice and equality for all.

Vice President Joe Biden said Monday that communities around the country need to work to bridge the separation between police and the residents they serve.

Biden devoted his 27-minute speech to the tension between police and minorities in some communities around the country following the deaths of two unarmed black men in encounters with white officers in Missouri and New York City this summer.
GOVERNMENT/YOUTUBE BLOCKED VIDEO:
https://www.youtube.com/watch?v=m4ukuuY-gKs;
but here's a duplicate:

THE SYMPTOMS BECOME MORE AGGREGIOUS BY THE DAY; THE PASTORS REMAIN COMPLICIT BY THEIR SILENCE & INACTION
REPRESENTATIVE REPORTS:
A):

"Fire chief’s ouster beginning of the end of religious liberty for Christians?":

B) State Seizes Seven Children Because Parents Had Legal Mineral Supplement, They Homeschool, They Have a Vegetable Garden, Use Natural Remedies, Etc.:

SEE: http://www.thenewamerican.com/usnews/item/19932-state-seizes-seven-children-because-parents-had-legal-mineral-supplement;
EXCERPT:
Law enforcement officers of Garland County, Arkansas served a search warrant on the Stanley home — yes, possession of a legal, medicinal mineral supplement is now grounds for being searched by the government — where they took the family's seven children by force.
During the search of the Stanley’s residence, an ambulance was brought to the scene, and each of their children was examined.
At approximately 9:30 p.m. January 12, the state showed up again. Reports WND.com, quoting Michelle, “Eventually ‘6 intimidating brute looking males and 1 DHS [Department of Human Services] female all lined up in our den to tell us they would be taking our kids into their custody for 72 hours.’”
Yet the children are still in the state’s custody more than a week later.
___________________________________________________________ 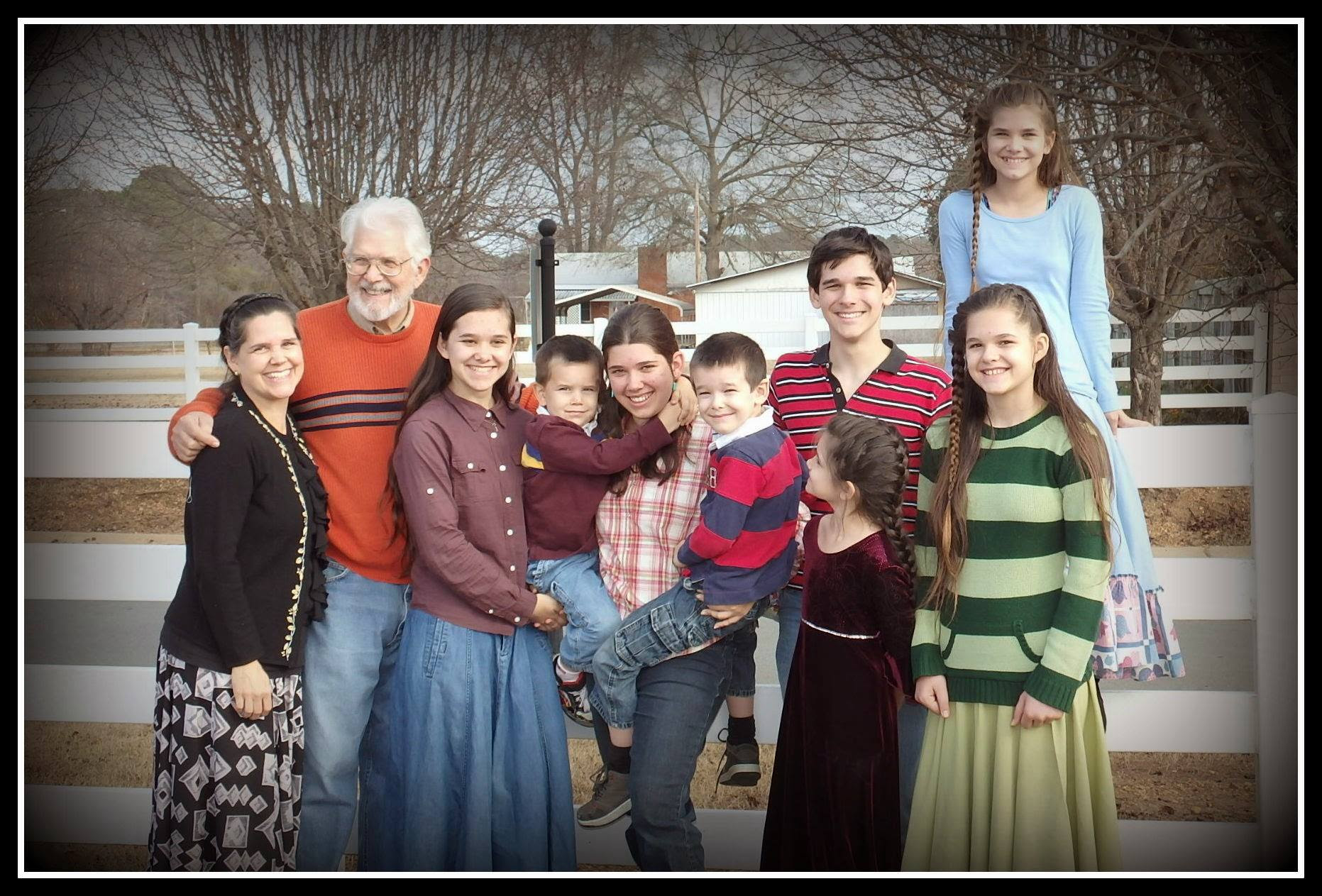 The Stanleys with their nine children, along with one set of grandparents

For Possession of Unapproved Supplement:

Published on Jan 20, 2015
One definition of tyranny: everything’s forbidden unless expressly permitted by the government. Even though over 100,000 die from FDA-approved pharmaceuticals, the government has kidnapped 7 children from a homeschool family in Arkansas after the father was found with an unapproved mineral supplement. Some children are kidnapped from families and forced to be given dangerous chemotherapy against their wishes. And others, like this family, have their children kidnapped because they MIGHT be given something that hasn’t been proven dangerous. 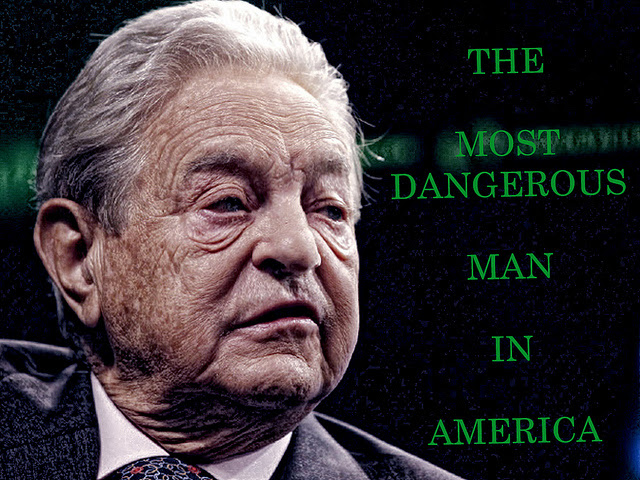 "Soros Exposed Orchestrating Ferguson Chaos":
SEE: http://www.thenewamerican.com/usnews/crime/item/19925-soros-exposed-orchestrating-ferguson-chaos;
EXCERPT: Billionaire Big Government-monger and Obama administration ally George Soros (shown) provided at least $33 million in a single year to radical leftist groups orchestrating protests and unrest in Ferguson, Missouri, and nationwide, according to an explosive investigation into filings of the globalist financier’s “philanthropic” tax-exempt “Open Society” foundations.
Among the radical Soros organizations that descended on Ferguson and participated in the scheming were the Samuel Dewitt Proctor Conference in Chicago, the Drug Policy Alliance, Make the Road New York, Equal Justice USA, Sojourners, the Advancement Project, the Center for Community Change, and networks from the Gamaliel Foundation. “All were aimed at keeping the media’s attention on the city and to widen the scope of the incident to focus on interrelated causes — not just the overpolicing and racial discrimination narratives that were highlighted by the news media in August,” the Times reported about the activities of the collection of Soros-funded groups, including more than a few race-hate mongers and pseudo-religious outfits with strong ties to the Obama administration.
___________________________________________________________
D): 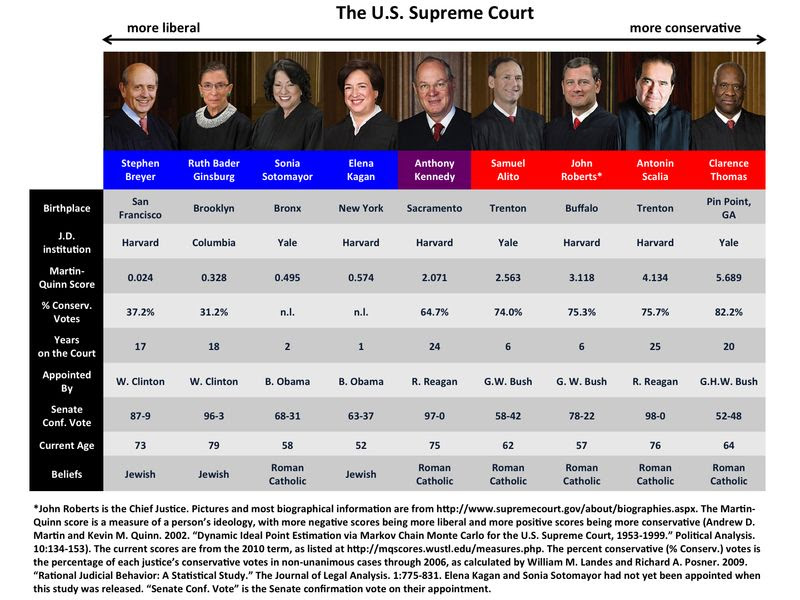 SEE: http://www.thenewamerican.com/usnews/crime/item/19936-new-police-radars-can-see-through-walls;
EXCERPT:
It has come to light that law enforcement agencies across the country have, for over two years, been using radar devices that allow officers to look through the walls of homes to learn whether anyone is inside — raising serious concerns about privacy violations. The radars use radio waves to detect movements inside a house, and are capable of detecting something as slight as breathing from a distance of over 50 feet. Other devices have additional capabilities, including three-dimensional displays, and some are used on drones. The Justice Department is reportedly developing systems that can map the inside of buildings and find the location of people inside.


You Were Warned About X Ray Police Years Ago:

Posted by John at 8:01 AM Links to this post