Posted by John at 5:34 PM Links to this post

1 Timothy 2:12 - But I suffer not a woman to teach, nor to usurp authority over the man, but to be in silence.
1 Corinthians 14:34 - Let your women keep silence in the churches: for it is not permitted unto them to speak; but [they are commanded] to be under obedience, as also saith the law. 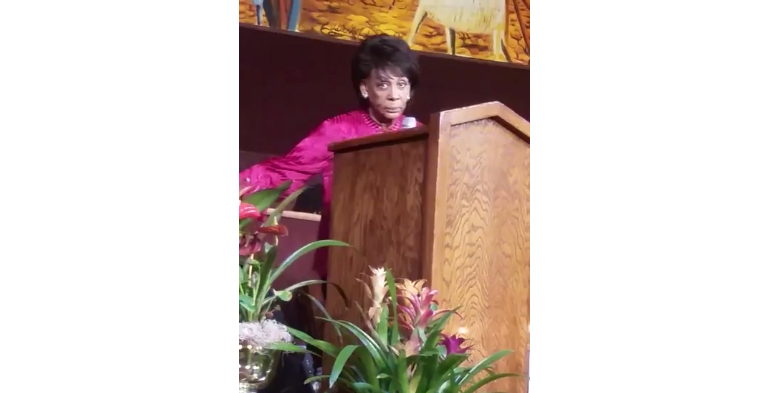 MAD MAXINE WATERS: "I'VE BEEN SENT BY GOD TO GET TRUMP"~WHEN POLITICS BECOMES RELIGION: SHE VIOLATES FEDERAL TAX LAW TO SLAM TRUMP IN CHURCH
Maxine Waters claims she is sent by God to get Trump impeached. Democrats revealed their hypocrisy when Obama used the IRS to persecute churches that support traditional values.

Maxine Waters Claims God Sent Her to Get Donald Trump

BY JOSHUA CAPLAN
SEE: https://www.breitbart.com/big-government/2018/07/25/maxine-waters-claims-god-sent-her-to-get-donald-trump/; republished below in full unedited for informational, educational and research purposes:

Rep. Maxine Waters (D-CA) on Sunday told congregants of the First AME Church in Los Angeles that God has sent her to take on President Donald Trump.

Waters began her tirade by accusing the president of being intent on “taking America down,” rather than living up to his 2016 presidential slogan of “Make America Great Again.”
“I am in this fight,” Waters declared before claiming her political opponents are waging an effort to “intimidate,” and “frighten,” her. During a June 30 speech in Los Angeles to demonstrators protesting President Trump “zero-tolerance,” immigration policies, the California lawmaker warned her enemies “better shoot straight,” if they are going to confront her. “No, we have members of Congress trying to intimidate me,” Waters said. “I have no fear. I’m in this fight. I know that there are those who are talking about censuring me, talking about kicking me out of Congress, talking about shooting me, talking about hanging me. All I have to say is this, if you shoot me, you better shoot straight. There’s nothing like a wounded animal.”
Waters told congregants she is not backing down from resisting the Trump administration’s policies despite calls from Senate Minority Leader Sen. Chuck Schumer (D-NY) and House Minority Leader Rep. Nancy Pelosi (D-CA) to tone down her violent rhetoric. “I’ve said that we can walk and chew gum at the same time,” she said.
Waters was roundly criticized after calling on her supporters to “create a crowd,” and “push back,” against Trump administration officials over its border policies. “You tell them they’re not welcome anymore, anywhere,”  the Congressional Black Caucus member said while speaking in front of Los Angeles’ Wilshire Federal Building.
The California Democrat in June told MSNBC she has “no sympathy,” for Trump administration officials who have been subjected to public harassment. “They tend to not want to confront this president or even leave, but they know what they’re doing is wrong,” Waters said. “I want to tell you, these members of his cabinet who remain and try to defend him, they won’t be able to go to a restaurant, they won’t be able to stop at a gas station, they’re not going to be able to shop at a department store. They’re going to protest. They’re absolutely going to harass them until they decide that they’re going to tell the president, ‘No, I can’t hang with you,’” she added.
The 79-year-old lawmaker concluded her speech claiming God anointed her to help lead the fight against the Trump administration. “You’ve gotta know that I’m here to do the work that I was sent to do, and as pastor said to me when I came in this morning, when God sends you to do something, you just do it!” she exclaimed. “So I have a message I’m going back to Washington tomorrow morning, I’m going to tell them pastor told me to come here and just do it!”
________________________________________________________________

The line between having Trump Derangement Syndrome and actual mental illness is a fine one to be sure, but 'Crazy Auntie' Maxine seems to have crossed it. And by a fairly wide margin I would have to say. Speaking at the First AME Church in Los Angeles this past Sunday, Maxine Waters went into a long, rambling and at times incoherent diatribe against Donald Trump, which wound up by saying that she was 'sent here by God' to take out President Trump. READ MORE: http://www.nowtheendbegins.com/congre...
Larry Klayman: The American People Must Rise Up To Defend President Donald Trump

BY JAMIE WHITE
SEE: https://www.infowars.com/maxine-waters-rejects-ocasio-cortez-democrats-not-a-socialist-party/; republished below in full unedited for informational, educational and research purposes:
Rep. Maxine Waters (D-Calif.) has piled on against rising New York socialist candidate Alexandria Ocasio-Cortez, rejecting the notion the Democratic Party should move far-left for the 2018 midterms and beyond.
“The Democratic Party is not a socialist party,” Waters said in an interview at CNBC’s Capital Exchange event Wednesday.
“I just don’t think our party should be identified because we have a few people who seem to be to the left of the left.”
The top Democrat is the latest leader of her party to voice anxiety over Ocasio-Cortez, along with Senate Minority Leader Nancy Pelosi (D-Calif.), who denied a rise of socialism within the party after No. 4 Democrat Joe Crowley (D-NY) was defeated by the socialist bartender-turned-politician last month.
“It’s ascendent in that district perhaps,” she said of New York’s 14th congressional district, where Ocasio-Cortez won. “But I don’t accept any characterization of our party presented by the Republicans. So let me reject that right now. Our party is a big tent, our districts are very different, one from the other.”
“They made a choice in one district. Let’s not get yourself carried away,” she added. “It is about that district.”
Several other Democrats also expressed their discontent with Ocasio-Cortez’s debut into their party ahead of the midterms, with some saying her platform would “bankrupt the country.”
“Ms. Ocasio-Cortez is a proud member of the Democratic Socialists of America, whose platform, like hers, is more Socialist than Democratic,” Democrat-turned-independent Joe Lieberman wrote last week.
“Her dreams of new federal spending would bankrupt the country or require very large tax increases, including on the working class.”
Other Dems blamed the growing wedge between moderates and the far-left on the media’s fawning of the socialist neophyte.
“In some ways the media has pushed the young woman who was victorious in the New York congressional race against Joe Crowley to the point that she is being made out as some kind of deity,” Rep. Emmanuel Cleaver (D-MO) said on Fox News Wednesday.
Of course, the Democrat Party of today is far-left in everything but name.
Many traditionally moderate lawmakers like Sen. Kirsten Gillibrand (D-N.Y.) have adopted the far-left’s “Abolish ICE” platform, and other leaders like DNC Chairman Tom Perez admitted socialists like Ocasio-Cortez were the “future of the Democratic Party” in part because they champion universal healthcare and free college tuition for all.
Twitter:

Waters: Scream in the Streets Against Trump;

SEE: https://www.thenewamerican.com/usnews/politics/item/29647-waters-scream-in-the-streets-against-trump-make-something-happen?vsmaid=233&vcid=3987;
EXCERPTS:
"As if she hadn’t done enough to encourage rage and violence in the streets, Representative Maxine Waters (shown), the leftist from California, is now calling for her stormtroopers to hit the streets and start screaming.
The mouth from South Los Angeles County told CNBC’s John Harwood she wants “racist” President Donald Trump impeached and that Trump won’t intimidate her.
Breitbart.com has compiled a list of “538 Acts of Media-Approved Violence and Harassment Against Trump Supporters.”"
Posted by John at 4:34 PM Links to this post

EXPOSED: EPA’S SECRET AGREEMENT WITH UN TO CONTROL YOU

EXPOSED: EPA’S SECRET AGREEMENT WITH UN TO CONTROL YOU
Alex Newman on the EPA’s conspiracy with the UN, the State Department & the National Security Council to control every aspect of your life using the pretense of environmentalism.