A MAJORITY OF WHITE DEMOCRATS HAVE BECOME NON-CHRISTIAN

A MAJORITY OF WHITE DEMOCRATS HAVE BECOME NON-CHRISTIAN
And what that means for America
BY DANIEL GREENFIELD
SEE: https://cms.frontpagemag.com/fpm/2019/10/majority-white-democrats-have-become-non-christian-daniel-greenfield;
Posted by John at 1:36 PM Links to this post

ISLAMIC STATE'S CALIPH AL-BAGHDADI
GIVEN ISLAMIC BURIAL RITES
Wait a minute. Didn’t everyone agree he was not Muslim?
BY ROBERT SPENCER
SEE:https://cms.frontpagemag.com/fpm/2019/10/islamic-states-caliph-al-baghdadi-given-islamic-robert-spencer; republished below in full unedited for informational, educational and research purposes:
According to Reuters, “the United States has given the remains of Islamic State leader Abu Bakr al-Baghdadi a burial at sea and afforded him religious rites according to Islamic custom after he was killed in a U.S. commando raid in Syria on Saturday.” This information came from “three officials,” all of whom “spoke on condition of anonymity,” but there is no reason to doubt it. There is ample reason, however, to wonder why it was done, since virtually everyone of influence in both parties have agreed that the Islamic State has nothing whatsoever to do with Islam.
Establishment Republican strategist Karl Rove said it on Fox News Monday: the Islamic State (ISIS) has “hijacked a great religion” and “stand in opposition to the vast majority of Muslims around the world.” Rove added that “they want to pervert a great religion.”
Rove was simply parroting the conventional wisdom. All through the Obama administration, the main concern of the President and his underlings was not to counter the Islamic State’s advance, but to deny that it had anything to do with Islam. On August 20, 2014, speaking a day after the Islamic State beheaded American journalist James Foley, Obama declared that “ISIL [his preferred acronym for the Islamic State] speaks for no religion. Their victims are overwhelmingly Muslim, and no faith teaches people to massacre innocents. No just god would stand for what they did yesterday and what they do every single day. ISIL has no ideology of any value to human beings. Their ideology is bankrupt. They may claim out of expediency that they are at war with the United States or the West, but the fact is they terrorize their neighbors and offer them nothing but an endless slavery to their empty vision and the collapse of any definition of civilized behavior.”
This became administration policy: “ISIL does not operate in the name of any religion,” said Obama State Department spokesperson Marie Harf not long after that. “The president has been very clear about that, and the more we can underscore that, the better.”
Hillary Clinton summed up the guiding philosophy here when she tweeted during her 2016 presidential campaign: “Let’s be clear: Islam is not our adversary. Muslims are peaceful and tolerant people and have nothing whatsoever to do with terrorism.” Not just ISIS, but all Muslims. And current Democrat front-runner has insisted that “ISIS has nothing to do with Islam.”
These confident assertions are bipartisan, and that isn’t just restricted to Rove. On September 17, 2001, President George W. Bush appeared at the Islamic Center of Washington, D.C., in the company of several prominent Muslim leaders, and said: “These acts of violence against innocents violate the fundamental tenets of the Islamic faith. And it’s important for my fellow Americans to understand that….The face of terror is not the true faith of Islam. That’s not what Islam is all about. Islam is peace. These terrorists don’t represent peace. They represent evil and war.”
The idea that the Islamic State is not Islamic and that Islamic jihadists are twisting and hijacking Islam is the standard and dominant perspective in the State Department, which was probably responsible for the decision to give al-Baghdadi Islamic burial rites. So why was this decision made? If the Islamic State has nothing whatsoever to do with Islam, then al-Baghdadi was not a Muslim at all.
But if the State Department realizes that al-Baghdadi was indeed a Muslim, as this decision to bury him with Islamic rites indicates, then everything Bush, Obama, and a host of others have told us all these years is false. And indeed it is. The UK’s Daily Mail reported Monday that Mohammed Ali Sajet, “one of Abu Bakr al-Baghdadi’s closest confidants” who “is related to Baghdadi via marriage and has been an ISIS member since 2015, described al-Baghdadi’s hideout this way: “He was in an 8-meter-long underground tunnel with a width of 5 to 6 meters. It had a library, religious books and the Quran and things of sort.”
What? The man had a library full of the Qur’an and other Islamic books in his hideout? Didn’t he know that ISIS had nothing whatsoever to do with Islam?
The State Department needs to get its story straight. Either al-Baghdadi was not a Muslim, but a “hijacker” of Islam, in which case he should not have been buried with Islamic rites, or he was indeed a Muslim, in which case the counterintelligence analysts who have been dismissed, marginalized, and reviled as “bigots” for noting Islam’s connection to terrorism should be brought in from the cold. But the latter possibility is only likely to happen if there is a sea change in the Department, and realism introduced where today fantasy holds sway. That change is not on the horizon.

Posted by John at 1:22 PM Links to this post

JEW HATRED EXPOSED AT UNIVERSITY OF MINNESOTA DURING NATIONAL STUDENTS FOR JUSTICE IN PALESTINE CONFERENCE
U. Minnesota named one of the “Top Ten Colleges that Promote Jew Hatred and Incite Terrorism.”
SEE: https://cms.frontpagemag.com/fpm/2019/10/press-release-jew-hatred-exposed-umn-during-natl-david-horowitz-freedom-center; republished below in full unedited for informational, educational and research purposes:
In a stealth campaign to reach students directly, the David Horowitz Freedom Center today distributed 2000 newspapers containing its new report on the “Top Ten Colleges that Promote Jew Hatred and Incite Terrorism” as well as posters condemning the Hamas-funded BDS movement against Israel on the University of Minnesota campus. The University of Minnesota is one of the schools named in the report.The newspaper distribution coincides with the National Students for Justice in Palestine Conference, a highly controversial event known for promoting Jew hatred and anti-Israel terrorism, which will take place this weekend at the University of Minnesota.Titled “From Campus to Congress: Allied with Terror,” the report documents the malignant spread of Jew hatred in our nation’s academic institutions. “Jew hatred is no longer solely the purview of academic outliers, those institutions known for radical activism and absurdist teachings,” the report explains. “The Jew hatred promoted by Hamas through its front group Students for Justice in Palestine has now trickled down to infect less typically activist campuses in the heartland—including the University of Minnesota which will host this year’s National Students for Justice in Palestine conference.”A poster included in the pages of each newspaper highlights the role that Congresswoman Ilhan Omar, whose district includes the University of Minnesota, has played in promoting the anti-Semitic Boycott, Divestment and Sanctions (BDS) movement against Israel. The poster features images of Rep. Omar and Nazi dictator Adolf Hitler, accompanied by a notorious tweet from Omar stating “Israel has hypnotized the world, may Allah awaken the people and help them see the evil doings of Israel.” The caption above this image states “BDS: Finishing the Work that Hitler Started.” These same posters were also hung in public locations on the Minnesota campus.“For nearly two decades, SJP has promoted Hamas lies and propaganda in order to establish a beachhead of support for anti-Israel terrorists on American campuses, resulting in a dramatic rise in anti-Semitic incidents and the harassment of Jewish students,” said David Horowitz, founder of the Freedom Center. “
“American universities like the University of Minnesota allow these terrorist allies to use their authority and prestige to lend this genocidal offensive an aura of respectability,” Horowitz continued. “Our campaign intends to expose SJP and other supporters of BDS as fronts for Hamas and to press universities to cease their funding and support of these organizations.”
Visit https://stopuniversitysupportforterrorists.org/ for more information on SJP’s links to Hamas and to read our new report on the Top Ten Colleges that Promote Jew Hatred and Incite Terrorism.
The David Horowitz Freedom Center, founded in 1988, is a not-for-profit organization located in Sherman Oaks, California. The Center’s mission is to defend free societies like America and Israel, which are under attack by totalitarians both religious and secular, domestic and foreign.

IDOLATROUS CATHOLICS OUTRAGED AS POPE FRANCIS PLACES AMAZONIAN INCAN IDOL, PACHAMAMA, IN VATICAN~IDOLS THROWN INTO THE TIBER RIVER; THEN POPE APOLOGIZES TO THOSE OFFENDED, BUT NOT TO CATHOLICS 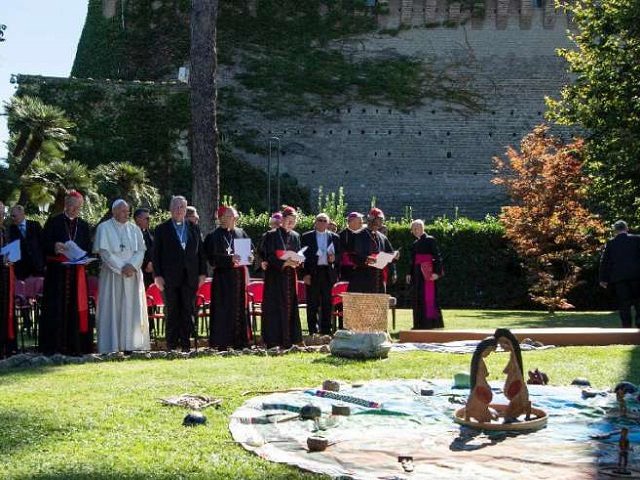 From where and whom did the Amazonian statues hurled in the Tiber actually originate?
https://www.youtube.com/watch?v=76Ckqi12mPA

TEL AVIV, ISRAEL: A NAVY SEAL, AN ARMY RANGER & AN APOLOGIST DISCUSS THE DEATH OF AL-BAGHDADI FROM A CHRISTIAN PERSPECTIVE

The White House declassifies a photo of the military dog that was wounded in the raid that led to the death of ISIS leader Abu Bakr al-Baghdadi. One America's Bobby Dupree has more on the K9 that played one of the most crucial roles in that top secret mission.

ANGELA MERKEL GIVES $500 MILLION
TO PALESTINIAN AUTHORITY AS IT PAYS MUSLIMS
TO MURDER ISRAELIS
BY ROBERT SPENCER
SEE: https://www.jihadwatch.org/2019/10/merkel-gives-500000000-to-palestinian-authority-as-it-pays-muslims-to-murder-israelis;
Posted by John at 10:13 AM Links to this post 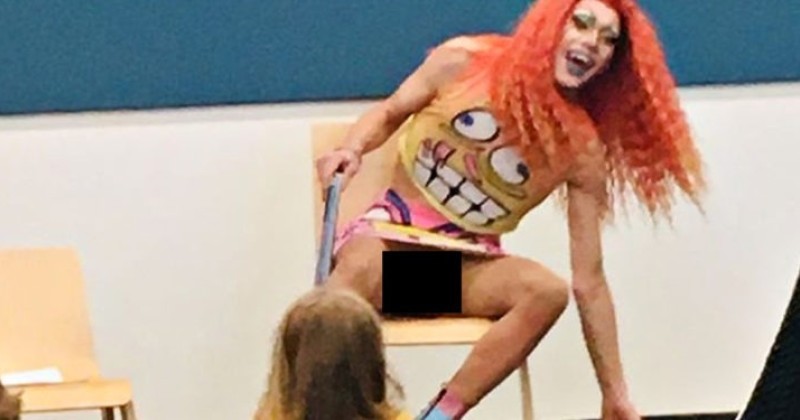 DRAG QUEEN FLASHES CHILDREN
DURING STORY HOUR
Child protection group accuses library of failing to carry out background check.
BY PAUL JOSEPH WATSON
SEE:https://summit.news/2019/10/30/drag-queen-flashes-children-during-story-hour/; republished below in full unedited for informational, educational and research purposes:
A drag queen accidentally flashed children a glimpse of his crotch during a ‘Drag Queen Story Hour’ event in Hennepin County, Minnesota.
The performer, known as Sasha Sosa, was reading to children at Hennepin County Library when the incident was caught on camera.
Child Protection League Action posted a series of images from the event asserting that they represented taxpayer funded “debauchery and sexual grooming.”
According to the group, Sosa is aged 18 or 19 and regularly performs at strip clubs alongside ‘Gemini Valentine’, who was also present at the library wearing a revealing leotard.
The Hennepin County Library also reportedly failed to carry out a background check on the pair before the event.
The exposure of children to sexual themes at such events has caused fury amongst many conservatives.
Earlier this year we reported on photos showing young children lying on top of a drag queen during a ‘Drag Queen Story Time’ event in Portland.
One of the participants at a Drag Queen Story Time event in Houston, 32-year-old Albert Garza, later turned out to be a registered sex offender who was convicted of assaulting an 8-year-old boy in 2008.
However, according to neo-con columnist David French, Drag Queen Story Time is “one of the blessings of liberty.”

Posted by John at 9:55 AM Links to this post BIDEN'S NEW SUPER PAC IS FRONTED BY A REGISTERED FOREIGN AGENT LOBBYING FOR AZERBAIJAN
BY JAMES MURPHY
SEE: https://www.thenewamerican.com/usnews/politics/item/33891-biden-s-new-super-pac-is-fronted-by-a-registered-foreign-agent;
Posted by John at 9:43 AM Links to this post