Quote from above:
"Governor Christie: Well my religion says it’s a sin. I mean I think, but for me, I’ve always believed that people are born with the predisposition to be homosexual. And so I think if someone is born that way it’s very difficult to say then that’s a sin. But I understand that my Church says that, but for me personally I don’t look at someone who is homosexual as a sinner."

Matthew 16:26-"For what profit is it to a man if he gains the whole world, and loses his own soul? Or what will a man give in exchange for his soul?"

COULD THIS MORAL RELATIVIST BE OUR NEXT PRESIDENT? 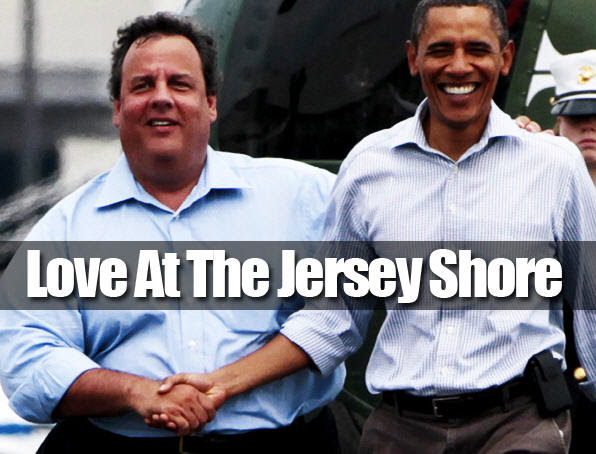 AN ACCORD THAT GOES BEYOND JUST HURRICANE RECONSTRUCTION?
WHAT MIGHT HAVE BEEN THE "QUID PRO QUO" DEAL THAT THE PUBLIC IS STILL IGNORANT ABOUT? COULD IT HAVE BEEN THE BILL BANNING GAY REPARATIVE THERAPY AS PART OF THE PRICE FOR ALL THAT FEDERAL MONEY? 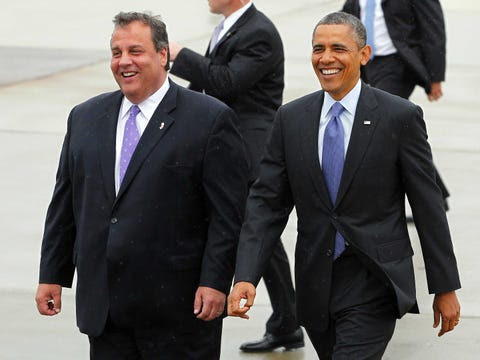 As the New American explained at http://thenewamerican.com/culture/faith-and-morals/item/16368-christy-signs-law-banning-minors-from-therapy-for-same-sex-attraction:
"Republican New Jersey Governor Chris Christie (shown) quietly signed a bill into law August 19 making it illegal for licensed therapists in the state to help minors overcome homosexual attraction — even with the approval of their parents. The bill, A3371, bans any qualified therapist, psychologist, social worker, or anyone “who performs counseling as part of the person's professional training for any of these professions,” from counseling anyone under 18 years of age with the intent of helping that person change his or her sexual orientation. Therapies and treatments that are prohibited, according to the bill's language, include “efforts to change behaviors, gender identity, or gender expressions, or to reduce or eliminate sexual or romantic attractions or feelings toward a person of the same gender.”"

Americans For Truth About Homosexuality also reported:
http://americansfortruth.com/2013/08/21/gov-christie-undermines-parental-rights-and-truth-by-signing-bill-banning-reparative-therapy-for-minors-claiming-homosexuality-is-innate-and-not-a-sin/.
"Peter LaBarbera, President of Americans For Truth About Homosexuality, (AFTAH.org), said today that New Jersey Gov. Chris Christie succumbed to homosexual activist propaganda and myths in signing into law a bill that bans professional counselors in the Garden State “from attempting to change a minor’s sexual orientation.”

GOVERNOR’S STATEMENT UPON SIGNING
ASSEMBLY BILL No. 3371
Assembly Bill No. 3371, which I have signed today,
prohibits individuals who are licensed to provide professional
counseling under Title 45 of the New Jersey statutes from
attempting to change a minor's sexual orientation.
At the outset of this debate, I expressed my concerns about
government limiting parental choice on the care and treatment of
their own children. I still have those concerns. Government
should tread carefully into this area and I do so here
reluctantly. I have scrutinized this piece of legislation with
that concern in mind.
However, I also believe that on issues of medical treatment
for children we must look to experts in the field to determine
the relative risks and rewards. The American Psychological
Association has found that efforts to change sexual orientation
can pose critical health risks including, but not limited to,
depression, substance abuse, social withdrawal, decreased selfesteem and suicidal thoughts.
I believe that exposing children to these health risks
without clear evidence of benefits that outweigh these serious
risks is not appropriate. Based upon this analysis, I sign this
bill into law.
Date: 8/19/13
/s/ Chris Christie
Governor
Attest:
/s/ Charles B. McKenna
Chief Counsel to the Governor
_______________________________________________________________________

CURRENT VERSION OF TEXT
As introduced.

AN ACT concerning the protection of minors from attempts to change sexual orientation and supplementing Title 45 of the Revised Statutes.

BE IT ENACTED by the Senate and General Assembly of the State of New Jersey:

3.    This act shall take effect immediately.