ECUMENICAL UNITY BASED ON MISUSE OF JOHN 17:21~NOT UNITY OF APOSTATE, HERETICAL DENOMINATIONS

"Comfortable in our Catholic Skin:

SEE: http://www.catholic.org/homily/yearoffaith/story.php?id=52133
"THAT ALL MAY BE ONE" HERESY OF CATHOLICISM:
EXCERPT:
"Francis succeeds two men of genius in his papal role. John Paul II was the liberator who stared down communism by the force of his courage and prayers. Benedict XVI was the eminent teacher of the Catholic Church in recent history. Francis appears now as the pastor, a shepherd who knows and loves his sheep and wants to lead them in love and humility. The new Franciscan moment is the season of the shepherd. Catholics and evangelicals are the two largest faith communities in the body of Christ. Without forgetting the deep differences that divide us, now as never before we are called to stand and work together for the cause of Christ in a broken world." 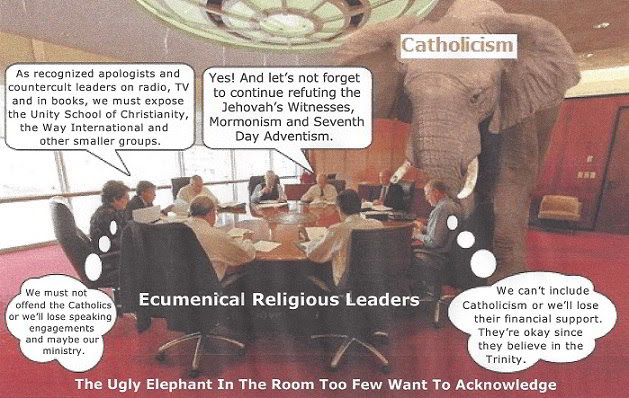 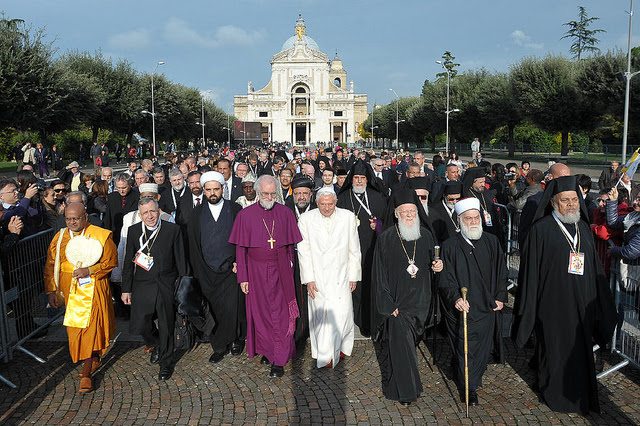 
Pope: The challenges of our time call for Christian unity:

John 17:21 is one of the favorite Bible verses of the ecumenical movement, used by everyone from Billy Graham to the Pope:
"That they all may be one; as thou, Father, art in me, and I in thee, that they also may be one in us: that the world may believe that thou hast sent me."
Many claim that the unity for which Christ prayed is an ecumenical unity of professing Christians that disregards biblical doctrine (since doctrine divides), but the words and context of John 17 destroys this myth.
In John 17 the Lord emphasizes that the unity He desires is one based on supernatural salvation and obedience to revealed truth. It is not a unity of nominal Christians and regenerate, of sound doctrine and false. It is not a "unity in diversity" that ignores doctrinal differences for the sake of a broad tent.
THE UNITY OF JOHN 17 IS A GOD-CREATED UNITY
"And now I am no more in the world, but these are in the world, and I come to thee. Holy Father, keep through thine own name those whom thou hast given me, that they may be one, as we are" (John 17:11).
There is nothing in Christ's prayer to indicate that men are to do something to create the unity for which He prayed. John 17 is a prayer addressed to God the Father, not a commandment addressed to men. It is not something man needs to do; it is something God has already done. The prayer was answered 2,000 years ago. It is a spiritual reality that was created by God among genuine believers who are committed to the Scriptures, not a possibility which must be organized by man. Each born again child of God is adopted into the family of God and is a part of Christ's kingdom.
In contrast, the ecumenical movement, even its most "evangelical" aspect, is careless about the gospel and salvation. I have attended many ecumenical conferences with press credentials and have asked attendees, "When were you born again?" and more often than not I get an unscriptural answer. I get answers from people who are trusting in their good works or their baptism or their church membership or a "sinner's prayer" or their mystical charismatic experiences or the fact that they "have always been a Christian." In my research on the emerging church in preparation for writing the book What Is the Emerging Church? in 2008, I read dozens of testimonies by emerging leaders, and most of them were unscriptural. (For documentation, see What Is the Emerging Church? chapter III "No Clear Testimony of Salvation," available from www.wayoflife.org.)
Prominent evangelical leaders such as Rick Warren preach a shallow "gospel" that is not the gospel we find in Scripture. (See "Rick Warren's Shallow Gospel" atwww.wayoflife.org.)
Any unity that is a unity among those who aren't clear on the gospel and haven't experienced supernatural salvation is not the unity that Jesus was praying for in John 17.
THE UNITY OF JOHN 17 IS A UNITY IN TRUTH
"For I have given unto them the words which thou gavest me; and they have received them, and have known surely that I came out from thee, and they have believed that thou didst send me. ... Sanctify them through thy truth: thy word is truth" (Jn. 17:8, 17).
See also John 17:19, 6, and 14.
Christ emphasized that He was praying for those who love and obey the Word of God and keep its doctrine. It is a unity of those who earnestly contend for the faith once delivered to the saints (Jude 3).
This is certainly not a prayer that envisions the modern ecumenical crowd that downplays and ignores the Word of God for the sake of a broad, lowest-common-denominator "unity." It is not a unity among all denominations with their multiplicity of heresies. It does not envision the New Evangelical crowd with its unscriptural judge-not philosophy and its wrong-headed tendency to reduce "essential" doctrine to a short list of "fundamentals," while downplaying the so-called "non-essentials" of God's Word for the sake of peace and unity.
___________________________________________________

BEWARE OF THE POPE'S CALL FOR "CHRISTIAN" UNITY!