NO BIBLICAL APPROACH TO SOCIAL JUSTICE HERE; JUST THE CULTURE OF DEATH Last June, in an interview with the New York Times, Bush called Planned Parenthood an “exceptional organization,” as she partners with the abortion and contraceptive giant through her non-profit organization Global Health Corps, which “mobilizes a global community of young leaders to build the movement for health equity.”
“Every day I’m privileged to be part of a community bound by the belief that health is a human right. Our ability to dream big, to ignore the status quo, and to achieve results will ensure that by working together every woman, man, and child has the opportunity to live a healthy life,” Bush states of her mission on her Corps website.
The site lists Planned Parenthood as being a partner in Uganda, as well as in Zambia. Global Health Corps additionally partners with the Planned Parenthood Federation of America for its work in the states.

Planned Parenthood President Cecile Richards told BuzzFeed on Saturday that it is “really exciting” that Bush will be headlining the Fort Worth fundraiser.
“It’s huge, and such a diverse crowd, a lot of elected officials, a lot of Republican sort of first families,” she stated. “I don’t know if she’s ever spoke at any [Planned Parenthood] event before.”
While Bush’s father has been known to identify as pro-life with exceptions, her mother has stated on several occasions that she believes abortion should remain legal—although she supports the idea of reducing the number of terminations.

“[We should do] what we can to limit the number of abortions, to try to reduce the number of abortions in a lot of ways, and that is by talking about responsibility with girls and boys, by teaching abstinence—having abstinence classes everywhere in schools and in churches and in Sunday school,” Laura Bush told NBC’s “Today Show” in 2001.
“We are a nation of different generations and beliefs, seeing issues through different eras and different eyes. While cherishing life, I have always believed that abortion is a private decision, and there, no one can walk in anyone else’s shoes,” she also outlined in her 2010 memoir “Spoken From the Heart.”
Barbara Bush told the New York Times last June in an interview alongside Planned Parenthood’s president that her family agrees on the issue of same-sex “marriage,” however. The outlet noted that Bush had participated in a public service announcement for “marriage equality.”
“[T]he narrative was that I was breaking with my father. But I had talked to my dad about doing it, and he was very supportive,” Bush said. “But my parents raised us to use our voices for issues we care about, and I feel strongly about marriage equality.”
Bush attended an event last year supporting Hillary Clinton’s run for the presidency.
Tickets for the Planned Parenthood fundraiser start at $150.

Uploaded on Feb 27, 2012
Barbara Pierce Bush talks about what she does as the Co-Founder and President of Global Health Corps.


Published on Feb 25, 2017
Barbara Pierce Bush, the daughter of former President George W. Bush, will headline a Planned Parenthood fundraiser next week in Texas, according to a report from the Texas Tribune.
Bush is expected to be the keynote speaker at the Planned Parenthood of Greater Texas's annual Fort Worth fundraising luncheon.
President Bush pushed for anti-abortion policies during his time in the White House, but his wife Laura Bush has supported legal abortion in the past.
The announcement comes amid the continuing debate over federal funding for Planned Parenthood, which provides a variety of reproductive health services to women, including abortions.
Barbara Bush is the CEO and co-founder of Global Health Corps and called Planned Parenthood an "exceptional organization" last year in an interview with the New York Times. Bush also attended an event for Democratic presidential candidate Hillary Clinton in Paris.
GODLESS FEMALE GLOBALIST SUMMIT BUILDS CONSENSUS ON CONTRACEPTION, ABORTION, VACCINES, POPULATION CONTROL & GAY RIGHTS

HOW PROGRESSIVE!
Better By Half: A Conversation with Melinda Gates, Barbara Bush, and Katie Couric
Published on Dec 17, 2014
In November, Melinda Gates joined Global Health Corp's Barbara Bush and Katie Couric for a conversation about making the world better by half by empowering women and girls.
Top Globalists Foreshadow An Apocalyptic
Biological Attack
Published on Feb 28, 2017
On January 18th, in an article titled “Bill Gates is teaming up with world leaders to stop the next deadly pandemic”, Business Insider reported that “Governments from Germany, Japan, and Norway have pooled funds along with the Gates Foundation to raise a total of $490 million so far. The target is $1 billion, which Coalition for Epidemic Preparedness Innovations (CEPI) says will help finance the first five years of research and development.” Gates appeared at January 2017’s Davos World Economic Forum, flaunting his CEPI program. CBS news. “Bill Gates on how to outsmart global epidemics”.

Donald Trump
Published on Feb 27, 2017
“W” made some not-so-veiled criticisms of Trump Monday on NBC. When asked about Trump’s travel ban, he pivoted to “freedom of worship”, implying that (a) the restrictions were religious persecution and (b) foreign citizens have a right to immigrate. On freedom of the press, Bush43 made it about the right of mainstream media to maintain their monopoly of press coverage at the White House, without anyone questioning what they report.
NO, WE DON'T MISS YOU YET:
Bush43 Flies His Globalist Flag 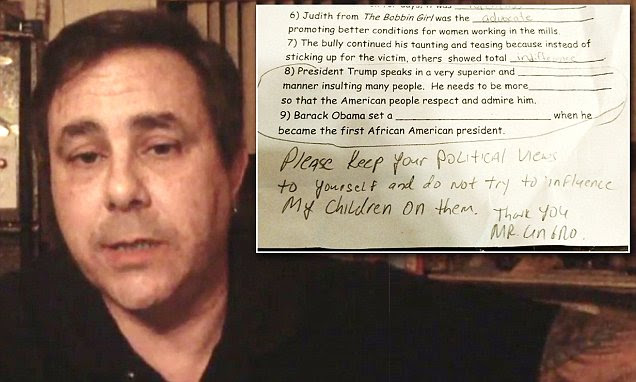 STATEN ISLAND, NEW YORK DAD FURIOUS WHEN DAUGHTER GETS ANTI TRUMP ASSIGNMENT
Published on Feb 18, 2017
NY dad questions his 11-year-old daughter's homework assignment when politics is injected. Is this a case of school indoctrination or parental overreaction? #Tucker
YES!
Staten Island teacher in Trump assignment is disciplined
SEE: http://www.silive.com/news/index.ssf/2017/02/staten_island_teacher_in_trump.html;
AND: http://www.breitbart.com/big-government/2017/02/20/new-york-teacher-disciplined-anti-trump-vocabulary-assignment/
By Diane C. Lore | lore@siadvance.com
Follow on Twitter
on February 17, 2017 at 1:50 PM, updated February 17, 2017 at 4:58 PM
STATEN ISLAND, N.Y. -- A veteran Staten Island teacher who slipped an anti-President Trump question into her homework assignment to her sixth-grade class has been disciplined by school authorities for using "poor judgment" in the matter.
Adria Zawatsky, a sixth-grade English teacher at Paulo intermediate School (I.S. 75) in Huguenot since 2005, had a letter of reprimand placed in her personnel file, according to officials. The letter followed a sit-down with Paulo Principal Kenneth Zapata.
"We have clear standards and regulations in place to ensure school staff maintain neutrality with respect to their political beliefs while in school," said Department of Education spokesman Michael Aciman.
Vincent Ungro, an Annadale father of four, and an unabashed Trump supporter, had complained to the Advance when his 11-year-old daughter, a sixth-grader at Paulo, came home with a vocabulary assignment containing sentences he believed were disparaging to the president and inappropriate for the classroom.

The vocabulary sheet drawn up by Zawatsky, gave students sentences and had them fill in the blanks, choosing from a list of words that would complete the sentence and make sense.
"President Trump speaks in a very superior and _________ manner insulting many people. He needs to be more __________ so that the American people respect and admire him," Zawatsky wrote.
The sentence was supposed to be completed using the words "haughty" and "humble".
A second question, that read "Barack Obama set a _________ when he became the first African American president," was supposed to be completed with the word "precedent".
Ungro had his daughter turn in the assignment, minus the three answers for the Trump and Obama sentences. Instead, Ungro circled the sentences and penciled a hand-written note to the teacher on the bottom of the sheet. "Please keep your political views to yourself and do not try to influence my daughter," he wrote.
Zawatsky -- who took 15 points off the assignment for the three missing Trump and Obama words -- wrote back.
"Firstly, I do not believe I was expressing a political view at all on my vocabulary sheet. My reference to President Trump was about his personality traits rather than his ability as a president," Zawatsky responded.
Still, Ungro said the reference to Trump, followed by Obama, was inappropriate, and he believed the teacher should have avoided the political reference altogether, or at the least, offered an apology when it was called to her attention.
"First, I don't think that putting your personal feelings about politics into a sixth-grader's homework is proper. There were at least a thousand sentences that she could have used besides disparaging our president," Ungro told the Advance.
While Ungro, said he didn't want to see Zawatsky fired or suspended, "she should have known better," he said.
Zawatsky, who earns a six-figure salary, has been teaching since 1996.
Ungro said he's glad he called the assignment to the attention of school officials, and believes he taught his daughter a valuable life-lesson through the experience.
"I taught my daughter a valuable lesson," he said. "That she should stay strong with her beliefs even if it's not the beliefs of her peers. That you don't have to block traffic, wear silly costumes or destroy other people's property to be heard.
Through patience, persistence and the power of the pen, you can accomplish many things."
Posted by John at 9:59 AM Links to this post