CIA CHIEF POMPEO CALLS WIKILEAKS
A HOSTILE INTELLIGENCE SERVICE
Published on Apr 27, 2017
Despite all that Wikileaks and Julian Assange did to help Donald Trump get elected, he is now turning his back on them and CIA chief Pompeo declared them a "hostile intelligence service".
Posted by John at 8:10 AM Links to this post

CALIFORNIA GOES FULL SOCIALIST WITH GOVERNMENT CONTROLLED HEALTH CARE
Posted by John at 8:05 AM Links to this post

JEFF SESSIONS ENFORCES TRUMP'S ORDER
ON SANCTUARY CITIES
IN FACE OF ILLEGAL COURT ORDERS
Posted by John at 8:01 AM Links to this post 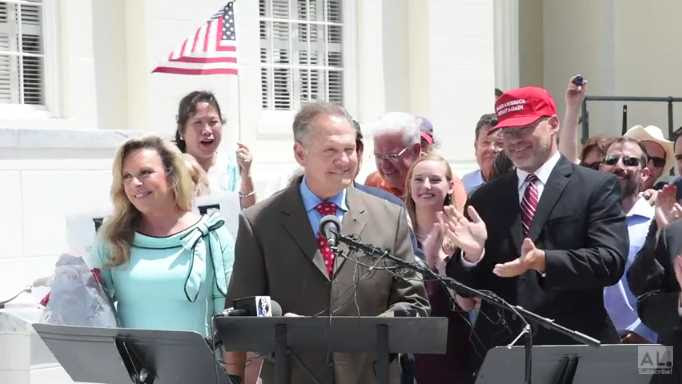 SUSPENDED ALABAMA CHIEF JUSTICE ROY MOORE ANNOUNCES RUN FOR U.S. SENATE
BY HEATHER CLARK
SEE: http://christiannews.net/2017/04/26/suspended-alabama-chief-justice-roy-moore-announces-run-for-u-s-senate/;
“I share the vision of President Donald Trump to make America great again,” Moore explained during a press conference surrounded by supporters, but added, “Before we can make America great again, we’ve got to make America good again.”
“Our first president in his farewell address said very simply, ‘The virtue of morality is a necessary spring of popular government. Who, that is a sincere friend to it, can look with indifference on attempts to shake the foundation of the fabric?'” he noted.
Moore outlined that the foundations of the nation are being shaken on a variety of levels, including in matters of protecting the unborn, the institution of marriage and religious liberty. He said that there also needs to be a return to the original intent of the U.S. Constitution.

“Socialized medicine, Common Core education—they’re not in the power of the federal government,” Moore said. “As United States Senator, I will continue to stand for the rights and liberties not only of this state, but of its people as well. I will defend those rights and liberties under the Constitution of the United States, so help me God.”
His announcement was met with applause and “amen.”
Moore again drew applause when he proclaimed the need to stand for God as he was asked by a reporter about his suspension from the Alabama Supreme Court.

“What I did, I did for the people of Alabama. I stood up for the Constitution. I stood up for God. The great majority of people in this state believe in God. The Constitution itself is based on an acknowledgment of God,” he declared. “Unless you understand what God has to do with the Constitution, you don’t understand the Constitution.”
As previously reported, in March 2015, six of the nine judges of the Alabama Supreme Court released a historic order halting the issuance of same-sex “marriage” licenses in the state. Moore recused himself from the matter and was not included in the order.
“As it has done for approximately two centuries, Alabama law allows for ‘marriage’ between only one man and one woman,” the 148-page order read. “Alabama probate judges have a ministerial duty not to issue any marriage license contrary to this law. Nothing in the United States Constitution alters or overrides this duty.”
Three months after the Alabama Supreme Court issued its order, the U.S. Supreme Court ruled in Obergefell v. Hodges, opining that states must recognize same-sex nuptials. The Alabama court did not immediately lift its order following the ruling as it took time sorting through the matter.
Therefore, in January 2016, Moore released a memo advising that the full court’s previous instructions remained in effect until it issued directives in light of the U.S. Supreme Court ruling in Obergefell.
But he also noted that his memo did not weigh in on how June’s U.S. Supreme Court ruling has impact on the Alabama Supreme Court’s directive, and said that it was not his place to make that determination.
“I am not at liberty to provide any guidance to Alabama probate judges on the effect of Obergefell on the existing orders of the Alabama Supreme Court. That issue remains before the entire court, which continues to deliberate on the matter,” Moore wrote.
In May, after receiving a complaint about Moore from the Southern Poverty Law Center and other entities, the Alabama Judicial Inquiry Commission (JIC) announced that it had filed ethics charges against the chief justice and suspended Moore while he faced a trial before the Court of the Judiciary (COJ).
Moore argued during his Sept. 2016 trial that he had not issued any orders, but only a status update as the Alabama Supreme Court had not rescinded its previous order following Obergefell. However, the COJ did not believe Moore and found him guilty on all ethics charges.
Last week, a special, randomly-selected Supreme Court panel affirmed the COJ’s conclusion.
Moore had likewise been removed from his chief justice seat in 2003 for refusing to remove a Ten Commandments monument from the court rotunda, but was re-elected by the people in 2012.
Fellow Alabama Supreme Court Justice Tom Parker, who supports Moore and believes the chief justice’s punishment was unjust, announced on Wednesday that he will now run for Moore’s seat on the bench.
“Alabama is a conservative state. We revere the Constitution and the rule of law. And I believe our courts are the battleground for our God-given rights as free people,” Parker said. “Please pray with me as I take this step, and thank you for standing with me as I continue to stand for the God-given principles that remain the foundation of the freedoms we cherish as Alabamians.”

Posted by John at 7:58 AM Links to this post