WILL STOPPING "PRACTICING" GAYS FROM CHURCH LIFE ADEQUATELY SAFEGUARD CHRISTIAN INTEGRITY?~WHAT IF THEY ARE MASQUERADING AS SAVED TO SUBVERT THE CHURCH?~OBAMA NEVER WAS THE FAMILY MAN HE PRETENDED 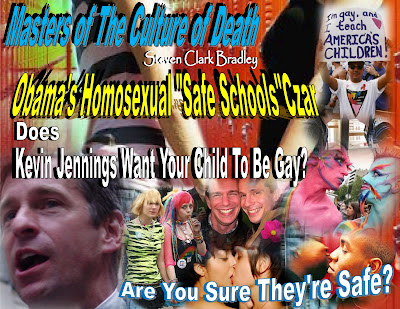 "Family Man" Obama: 'Our journey is not complete' until we redefine marriage

Indoctrination & Recruitment by Gays
Similar to Hitler & Stalin,
Like All Radical Movements:


CORRUPTION OF CHILDREN BY GAYS:
"FAMILY MAN" OBAMA APPOINTED HIM:

AFTAH's LaBarbera Speaks Out on Obama, Kevin Jennings and GLSEN's 'Fistgate' Scandal
Uploaded on Aug 17, 2009
WARNING: graphic descriptions documenting "gay" corruption of youth. Peter LaBarbera, president and founder of Americans For Truth About Homosexuality (www.aftah.org), opens AFTAH's June 17, 2009 pro-family coalition press conference on President Obama's radical homosexual agenda. LaBarbera exposes Obama's hypocrisy on traditional marriage, and plays the infamous "Fistgate" audiotape revealing how -- at a "gay youth" event -- underage girls and boys were exposed to graphic verbal "how-to" lessons on "fisting" and other homosexual perversions. (Fistgate occurred at a "queer" youth panel that was part of a 2000 conference sponsored by GLSEN, the Gay, Lesbian, Straight Education Network). GLSEN founder Kevin Jennings was appointed by President Obama to head up the Dep't of Education's "Safe and Drug-Free Schools" agency. A DVD of the AFTAH press conference in Chicago is available for $20 postpaid. Send your check to: Americans For Truth, PO Box 5522, Naperville, IL 60567-5522 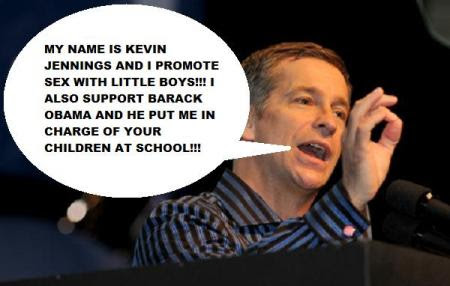 Jennings is a vicious anti-Christian bigot (he said [expletive deleted] em and Drop dead! to the religious right) who capitalized early on the idea of promoting homosexuality in schools under the guise of safety. One very unsafe event that should have resulted in Jennings banishment from the world of education was Fistgate [warning: very graphic language] All photos courtesy of MassResistance.org.

Gay Marriage Ruling Brought Us Back To 1776

Hope We Don't Have A War Over Gay Marriage;
SCOTUS Referred to Wars in Their Decision

THE CHURCH AT RISK:
ARE GAYS SAFE IF THEY SAY THEY ARE NOT "PRACTICING", BUT DISPLAY
ALL THE MANNERISMS & BEHAVIORISMS
OF A GAY LIFESTYLE?
IF SAFE FOR ADULTS, ARE THEY SAFE
FOR YOUR KIDS, LIKE THE BOY SCOUTS?