IDOLATRY: 100 YEARS LATER, THE THREE FATIMA SEERS OF MARY ARE HEADING FOR SAINTHOOD IN THE CATHOLIC CHURCH

DEMONIC APPARITIONS IN PORTUGAL IN TOWN NAMED AFTER
MOHAMMED'S DAUGHTER 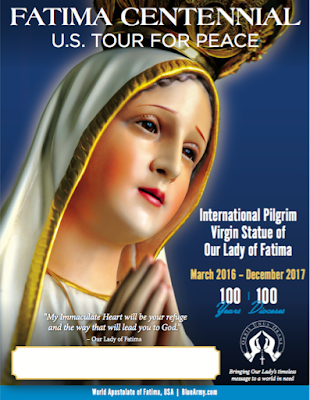 CATHOLIC IDOLATRY & APOSTASY PUSHES JESUS CHRIST INTO THE BACKGROUND ONCE AGAIN
100 YEARS LATER, THE THREE FATIMA SEERS ARE HEADING FOR SAINTHOOD IN THE CATHOLIC CHURCH
BY TREY ELMORE
SEE: https://www.churchmilitant.com/news/article/in-the-fatima-centennial-year-blesseds-francisco-and-jacinta-marto-approved;

ROME (ChurchMilitant.com) - In the centennial of the apparitions of Our Lady of Fatima, two shepherd children who witnessed the apparitions are one step closer to canonization. After a second miracle was approved by Pope Francis, he signed the decree for the cause of canonization for Blesseds Francisco and Jacinta Marto Thursday. The third seer, Servant of God Lucia Santos, who died in 2005, is also advancing in her cause for canonization, opened in 2008.
Francisco Marto died on April 4, 1919 at age 10. Francisco's First Holy Communion was also his last, known in the Catholic faith as Viaticum. His sister Jacinta died the following year on February 20, also at age 10.  Their cause for canonization has been open since 1946. Both siblings were beatified on May 13, 1989 by Pope St. John Paul II, the anniversary of the first apparition of Our Lady of Fatima in 1917.

In her messages to the seers, Our Lady instructed them to pray their Rosary daily and offer sacrifices for sinners.
"Pray, pray very much," she insisted. "Make sacrifices for sinners. Many souls go to Hell, because no one is willing to help them with sacrifice."
The children followed Our Lady's instructions, going without their lunch, wearing a rope with knots, patiently enduring the ridicule of those who didn't believe them.
There were six apparitions total, occurring on the 13th of each month from May to October, with the exception of the August apparition, which took place on August 19, the Feast of the Assumption. This was owing to the children's being prevented by the secularist government, which was trying to force the children to deny the apparitions. These attempts included death threats.
The apparitions were preceded by a wave of anti-clerical laws associated with the revolution that had taken place in Portugal in 1910. Our Lady stated in her messages to the children that she desired consecration of Russia to Her Immaculate Heart and the practice of the Five First Saturdays devotion. She said if her requests were not followed, Russia "will spread her errors throughout the world." In November 1917, following the final apparition of Our Lady in October and the Miracle of the Sun, Russia fell to the Bolsheviks.

The Fatima message consists of three parts, or "secrets": The First was the vision of Hell. The second was the the requests of Communions of Reparation on five consecutive first Saturdays of the month, and the Consecration of Russia. There were several consecrations made by popes under varying circumstances, which has given rise to controversy over whether this part of Our Lady's request has been fulfilled. The Third Secret was released in the year 2000, and has likewise been the subject of controversy.
The date May 13 holds significance owing to being the date of the first appearance of Our Lady of Fatima. It was also on this date in 1981 that Pope St. John Paul II survived an assassination attempt where he was shot four times. One bullet struck the Holy Father in the abdomen, missing a major artery by a fraction of an inch. The pope would later credit his survival to Our Lady, saying that her hand guided the bullet's path.

The name Fatima, the town in which the three children received Our Lady's messages, was named for the daughter of Mohammed, the founder of Islam. This is from the period of Moorish occupation of Portugal and Spain, which lasted from 711–1492. Some have speculated a connection between the Fatima message and its emphasis on the Rosary with the military victory over Muslim forces at the Battle of Lepanto in 1571, which Pope Pius V credited to Our Lady of the Rosary. 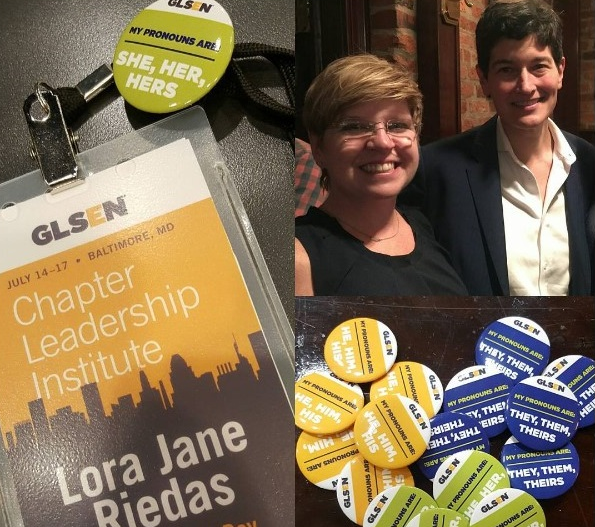 FLORIDA TEACHER ACCUSED OF PROMOTING HOMOSEXUAL ADVOCACY IN MATH CLASSROOM
BY HEATHER CLARK
SEE: http://christiannews.net/2017/04/30/florida-teacher-accused-of-promoting-homosexual-advocacy-in-math-classroom/;
Attorneys with Liberty Counsel wrote to Hillsborough County Superintendent Jeff Eakins on April 19 to express concern about Riverview High School teacher Lora Jane Reidas, who identifies as a lesbian. They advised that they had received reports that three children in Reidas’ classroom had been prohibited from wearing crucifixes because they could be considered to be “gang symbols” and “disrespectful.”
It provided a photograph of one of the crucifix pendants.
Meanwhile, according to additional photographs provided to the organization by parents, Reidas has decorated her classroom with various homosexual advocacy material, including buttons on her desk that read “I Love My LGBT Students” and “Safe Schools for All” in promotion of the Gay, Lesbian and Straight Education Network (GLSEN).

A poster is also displayed on the wall advising that her classroom is “safe and inclusive” for “lesbian, gay, bisexual and transgender students and their allies,” and the word “ally”—also posted to the wall—is spelled out in large cut-out letters and covered with handwritten sayings in support of the homosexual lifestyle.
“Moreover, at the beginning of the semester, Ms. Riedas placed LGBT rainbow stickers on students’ classroom folders without their consent, which were there one day when the students arrived,” the letter from Liberty Counsel alleged. “One of our clients reports that after she removed the LGBT sticker, Ms. Riedas’ behavior toward her changed markedly for the worse.”
At the time of the correspondence, it was also believed that Reidas planned on promoting the GLSEN’s “Day of Silence” and was apparently tweeting about homosexual advocacy issues during class time.

While Reidas serves as the sponsor of the school’s “gay-straight alliance,” Liberty Counsel believes the teacher’s actions violate district policy, which states that staff “may not dedicate work time to an outside interest, activity or association,” since her homosexual advocacy has nothing to do with math class.
“Ms. Riedas has … ‘use[d] institutional privileges for personal gain or advantage’ in promoting her own politically activist LGBT viewpoint to the students, which are a captive audience. Her choice of buttons and classroom décor give the overwhelming impression that her lesbian identity is foremost in her mind at all times, and is designed to show students in no uncertain terms how she views the world,” the group wrote.
However, Reidas has denied any wrongdoing, stating that she only told one student at the beginning of the year not to wear rosary beads because they could be considered gang symbols as per district policy. She said she would never prohibit students from wearing crosses, claiming that she herself identifies a Christian.
“I’m a Christian myself. I would never do that because I would be hurt if someone would tell me not to wear my cross,” Reidas told the Tampa Bay Times.
And while she didn’t deny the homosexual advocacy displays in her classroom, she asserted that such discussions are separate from math class and that she’s simply trying to let students know that her room is a safe space from bullying.
“I am trying to let kids know that if they need a sanctuary, my classroom is it,” Reidas said. “Some teachers, they let it go because they’re kids. But I will address it. ‘That’s so gay?’ Not at all.”
She said that as word has spread about the controversy, some students are now purposefully coming to class with Roman Catholic rosaries and/or are drawing crosses or writing Scripture on the back of their math papers.
“I’m just annoyed that they’re using my students,” Reidas contended. “They’re manipulating them. They’re getting kids as teenagers to lie for their agenda.”
Liberty Counsel President Mat Staver disagrees.
“She’s free to do what she wants to do in her own time outside of that classroom,” he said. “She’s free to be a sponsor of a student-initiated, student-led club. But she crosses the line when she brings things into the classroom that pushes her ideas onto the students. You talk about being inclusive. But she’s not including people who do not agree with her.”
The district is currently investigating the complaint.

TRUMP DECLARES WAR ON ENEMIES OF THE SECOND AMENDMENT IN HARRISBURG, PA~NRA CONVENTION COMMENTS ON RIGHT TO BEAR ARMS

TRUMP DECLARES WAR ON ENEMIES OF THE SECOND AMENDMENT IN HARRISBURG, PA~NRA CONVENTION COMMENTS ON RIGHT TO BEAR ARMS
The Fight For Gun Rights Has Just Begun
Firearms Prevent America From Becoming
A Police State
All Americans Should Embrace Their
2nd Amendment Rights
Kit Cope: The 2nd Amendment Protects All Others
The 2nd Amendment Isn't About Hunting
MSM Pushes Fake News Lies About NRA Convention
Posted by John at 3:36 PM