UK: MOTHER CONVERTS TO ISLAM, IS MURDERED BY HER MUSLIM HUSBAND FOR WEARING WESTERN CLOTHES~BLUDGEONED, STABBED, DUMPED LIKE TRASH, SET ON FIRE

UK: MOTHER CONVERTS TO ISLAM,
IS MURDERED BY HER MUSLIM HUSBAND
FOR WEARING WESTERN CLOTHES
BLUDGEONED WITH A HAMMER, STABBED,
DUMPED LIKE TRASH, SET ON FIRE
BY ROBERT SPENCER
SEE: https://www.jihadwatch.org/2017/11/uk-mother-converts-to-islam-is-murdered-by-her-muslim-husband-for-wearing-western-clothes;
This is the result of the culture of violence that is created by religious teachings telling men to beat women from whom they “fear disobedience” (Qur’an 4:34). It is also a result of a culture that accepts honor killing. Muslims commit 91 percent of honor killings worldwide. The Palestinian Authority gives pardons or suspended sentences for honor murders. Iraqi women have asked for tougher sentences for Islamic honor murderers, who get off lightly now. Syria in 2009 scrapped a law limiting the length of sentences for honor killings, but “the new law says a man can still benefit from extenuating circumstances in crimes of passion or honour ‘provided he serves a prison term of no less than two years in the case of killing.’” And in 2003 the Jordanian Parliament voted down on Islamic grounds a provision designed to stiffen penalties for honor killings. Al-Jazeera reported that “Islamists and conservatives said the laws violated religious traditions and would destroy families and values.”

Until the encouragement Islamic law gives to honor killing is acknowledged and confronted, more women will suffer. 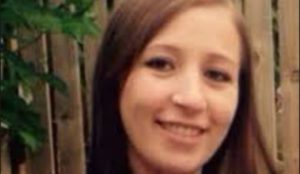 “Young Mother Who Converted to Islam Murdered in Hammer Attack After Going Back to Western Lifestyle,” by Virginia Hale, Breitbart, November 17, 2017 (thanks to Ken):


A young mother who converted to Islam was brutally murdered by her husband, who barred her from seeing family and friends after she started wearing Western-style clothes again, a British court has heard.
Akshar Ali hit Sinead Wooding with a hammer and stabbed her repeatedly, before dumping in the woods and then torching the mother-of-four’s body, Prosecutor Nicholas Campbell QC told Leeds Crown Court.
Ms Wooding was in the process of converting to Islam and changed her name to Zakirah when she met Mr Ali, 27, who worked on a food stall at Leeds indoor market, according to the Times.
The pair were married at an Islamic ceremony in early 2015, but the jury heard their relationship was “volatile” and violent at times, with arguments over 26-year-old Wooding continued visits to family and friends her husband had “forbidden” her from seeing.
Mr Campbell said Ms Wooding had started wearing Western clothing days before she was killed on May 11 at a party held at the house of her husband’s friend Yasmin Ahmed, who along with Mr Ali, denies murder.
After the couple had an argument, guests heard a bang from the kitchen, at which point Ms Ahmed went to check on them.
She returned, and said Ms Wooding had stumbled into a door but that everything was fine, and a short time afterwards reported to guests that the young mother had left the house.
“In fact Sinead Wooding never left that property alive,” Mr Campbell said, telling the court she was first incapacitated  — suffering a fractured skull after repeated blows to the head with a claw hammer  — and then killed later on, after being “stabbed several times” with a knife.
“If she was conscious at that time of the stabbing she would have been prevented from crying out,” Mr Campbell told the jury, who heard that blood found on Ms Ahmed’s cellar walls and floor was a DNA match for Ms Wooding.
“She was stabbed several times with at least one sharp bladed instrument, almost definitely a knife.”
Her body was allegedly kept in the cellar for two days, then “wrapped up [and] bound with wire” before two people were seen carrying it out at night, by a neighbour….

Sinead Wooding called police
before she was murdered
Sinead Wooding was allegedly murdered by her husband Akshar Ali and friend Yasmin Ahmed on May 13A mother-of-four allegedly murdered by her strict Muslim husband called police the night before she was killed but officers did not visit until three days later.Sinead Wooding, 26, had dialed 999 after her husband Akshar Ali, 27, had banned her from seeing friends and family, on May 13.But by the time police arrived at her marital home in Leeds, Ms Wooding's body had been dumped in a nearby woodland and set alight, Leeds Crown Court heard.Ali and friend Yasmin Ahmed, 27, are accused of stabbing Ms Wooding before bludgeoning her with a claw hammer during a drunken argument at a house party.The Muslim convert's badly disfigured body was found with
Posted by John at 10:24 AM Links to this post

Austria’s Interior Ministry is reporting that applications for asylum have decreased by 43% this year, while the rate of deportations has increased by over 50%.
Applicants admitted to the asylum program in 2016 nearly maxed out Austria’s cap of 37,500 as over 36,000 were accepted. However, only half of this year’s capacity of 35,000 has been filled – a sharp decline.

The future is even more promising for Austria, as two anti-open borders parties – the dominant People’s Party (OVP) and the surging Freedom Party (FPO) – are working to form a new governing coalition, which could see the admission of migrants drop even more sharply.
If the Freedom Party, led by Heinz-Christian Strache, had their way, Austria would move towards zero or negative immigration flow by way of eliminating its ‘asylum’ program, while deporting many of the tens of thousands of migrants who have settled in the country in recent years.
“We do not need an upper limit, nor a halving of the upper limit – we need a zero-migration, in fact, a minus-migration, because of all the illegals and criminals who are in the country,” Strache said earlier this year. “Let us put an end to this policy of Islamization… otherwise we Austrians, we Europeans will come to an abrupt end.”
In Germany, Angela Merkel – upon whom many place the most blame for the flood of millions of illegal immigrants into Europe from Africa and the Middle East – is facing the possibility of either being ejected as Chancellor, or the prospect of a second election after her party’s failure to form a coalition, with immigration quotas being a central issue of contention.
Merkel’s Christian Democratic Union missed a critical deadline yesterday while trying to stitch together a three-party “Jamaica coalition,” which could force new elections – or her ouster.
“It’s not just the chancellor’s fourth term that depends on the success of Jamaica, but her entire political career,” reported Bild ahead of the deadline, calling it Merkel’s “most dangerous night.”
Despite the arbitrary cutoff date, talks are expected to continue into the weekend.
Merkel’s party has slipped to its lowest popularity in the polls in 17 years – while the populist, pro-border control Alternative For Germany (AfD) makes record gains.

“With coalition talks ongoing and Merkel’s position under question, it marks another low point an increasing backlash against her insistence on mass open door migration,” reports Westmonster. “With the anti-mass migration Alternative for Germany on the rise having gone from 0 seats in the Bundestag to over 90, it is clear that the shape of German politics is now changing radically.
Dan Lyman: Facebook | Twitter

WHY ARE MEN BECOMING SO EFFEMINATE?~ESTROGEN IN FOOD AND WATER, OR GAY AGENDA PERMEATING CULTURE; OR BOTH?

WHY ARE MEN BECOMING SO EFFEMINATE?
We’re losing an entire generation to
estrogen takeover
BY PAUL JOSEPH WATSON
SEE: https://www.infowars.com/why-are-men-becoming-so-effeminate/;
Why are straight men becoming so effeminate?
Men’s testosterone levels in the west have been dropping EVERY YEAR since the 80’s.
Estrogen in food and the water supply as a result of birth control & other contaminants is reaching crisis levels.
What is going on? Is it mainly cultural or environmental?
How can we reverse the loss of an entire generation?

DROP IN SPERM COUNT DUE TO CHLORINE, FLUORIDE IN WATER SUPPLY

PENTAGON FOOTS BILL FOR SOLDIER'S "GENDER TRANSITION" SURGERY AT TAXPAYERS' EXPENSE
BY DAVE BOHON
SEE: https://www.thenewamerican.com/usnews/item/27391-pentagon-foots-bill-for-soldier-s-gender-transition-surgery;
An active duty U.S. military service member underwent “gender transition” surgery November 14, a procedure that was approved and paid for by the Pentagon, the Defense Department has announced.
The Pentagon said the individual getting the surgery is an infantry soldier who identifies as a woman, and who received his Combat Infantry Badge in Afghanistan in 2003.
Defense Department spokeswoman Dana White told reporters that the surgery was performed in a private hospital in Pennsylvania and was paid for through the soldier's military health coverage. She explained that the procedure was done on the advice of doctors who deemed it medically necessary.
“Military hospitals do not have the surgical expertise to perform this type of surgery, therefore it was conducted in a private hospital,” said White, adding that since the soldier “had already begun a sex-reassignment course of treatment, and the treating doctor deemed this surgery medically necessary, a waiver was approved by the director of the Defense Health Agency.”
In July President Trump overturned President Obama's decision to allow transgender individuals full access to military service, announcing that “the United States government will not accept or allow transgender individuals to serve in any capacity in the U.S. military. Our military must be focused on decisive and overwhelming victory and cannot be burdened with the tremendous medical costs and disruption that transgender in the military would entail.”
In October a federal court put a hold on that ban as lawsuits filed by transgender service members make their way through the courts. However, the ban on federal funding of “gender reassignment” surgeries was left in place, with the caveat that service members who had already begun the “transition” process would be exempted. This exemption allowed the present soldier to have his “gender reassignment” surgery paid for by the government.

Posted by John at 9:11 AM Links to this post

CALIFORNIA MOM THREATENED WITH ARREST FOR NOT VACCINATING HER CHILDREN

CALIFORNIA MOM THREATENED WITH ARREST FOR NOT VACCINATING HER CHILDREN
Could you imagine being threatened by law enforcement authorities over vaccine records as you are waiting with your children for the school bus?
Alex Jones explains it all.
Posted by John at 9:04 AM Links to this post