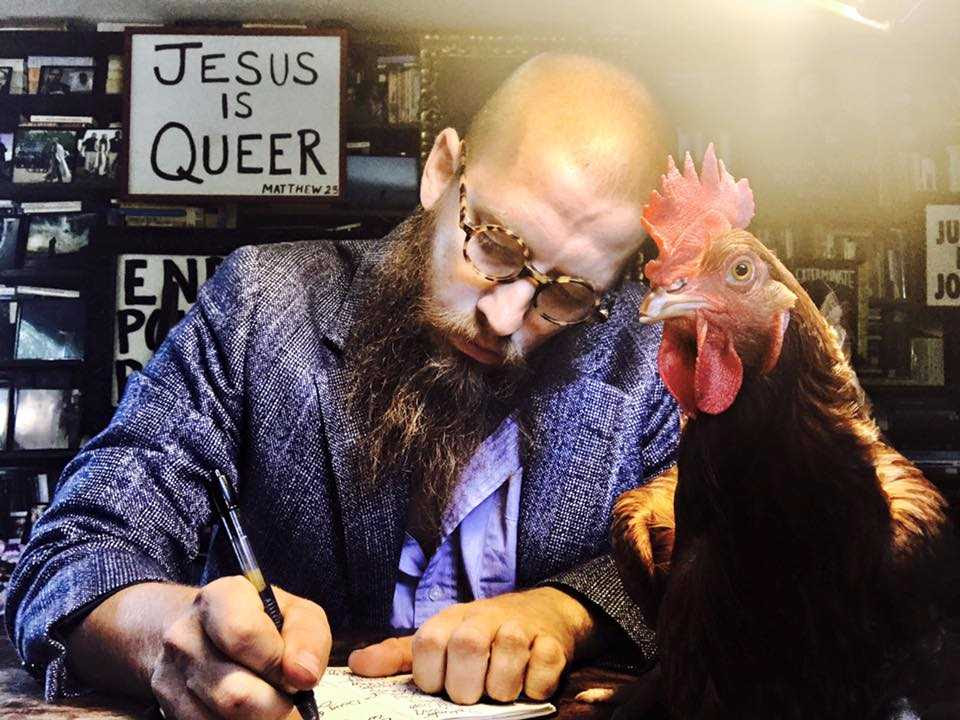 SEE OUR PREVIOUS POST:
SBC MINISTER AFFIRMS POLYAMORY (THREESOMES, FOURSOMES, QUINTUPLESOMES, ETC.)
https://ratherexposethem.blogspot.com/2017/10/sbc-minister-affirms-polyamory.html
BLASPHEMOUS SOUTHERN BAPTIST MINISTER
WHO SUPPORTS POLYAMORY CLAIMS
"HOLY TRINITY IS A POLYAMOROUS RELATIONSHIP"
BY HEATHER CLARK
SEE: http://christiannews.net/2017/10/11/blasphemous-minister-who-supports-polyamory-claims-holy-trinity-is-a-polyamorous-relationship/;
“The Holy Trinity is a polyamorous relationship,” Jeff Hood, who holds a doctorate with a focus in “queer theology” from Brite Divinity School and who was ordained at a church within the Southern Baptist Convention, asserted during a recent Patheos interview with Chuck McKnight.
“You can’t talk about the level of intimacy and ecstasy that these three beings are constantly experiencing without defining their relationship in such a way,” he claimed. “Their love has always been and will always be a shared phenomenon. In the Holy Trinity, love is never denied. We should spend our lives making sure that the love of polyamorous individuals is never denied and always protected. The Holy Trinity demands it.”
Hood has stated before on his website that he believes that “the disciples and Jesus were involved in some sort of polyamorous relationship.”

“While there could be many explanations of the polyamorous God, the one that matters the most is this: God dwells within the oppressed and marginalized (Matthew 25). Polyamorous folks are constantly oppressed and marginalized,” he told McKnight. “God is polyamorous, and if we want to get saved than we have to figure out a way to become connected to polyamory.”
Hood acknowledged during the interview that his views are rejected by many Christians, who he called “church [expletives] that have no knowledge of God.”
“Do these people sound like they know anything about love? [Expletive] no. I ain’t listening to a [expletive] word they say,” he said. “I know who I’m listening to. I hear the voice of God, ‘I am the way, the truth and the life. No one can can love Me and condemn polyamory, for I am polyamorous.'”
Hood’s views on the subject have been met with mixed reaction.
“God explicitly condones polygamy and the whole Bride of Christ is polygamous,” one commenter wrote.
“Plural unity within the Trinity is not polyamory,” another stated. “What people want to do is their business; however, if you feel the need to justify it scripturally, at least be less sloppy when you try. Otherwise you’re just preaching to the choir, so to speak.”
“Jeff Hood is clearly biblically ignorant. His so-called knowledge of God comes from Satan,” a third wrote.

Posted by John at 4:01 PM Links to this post 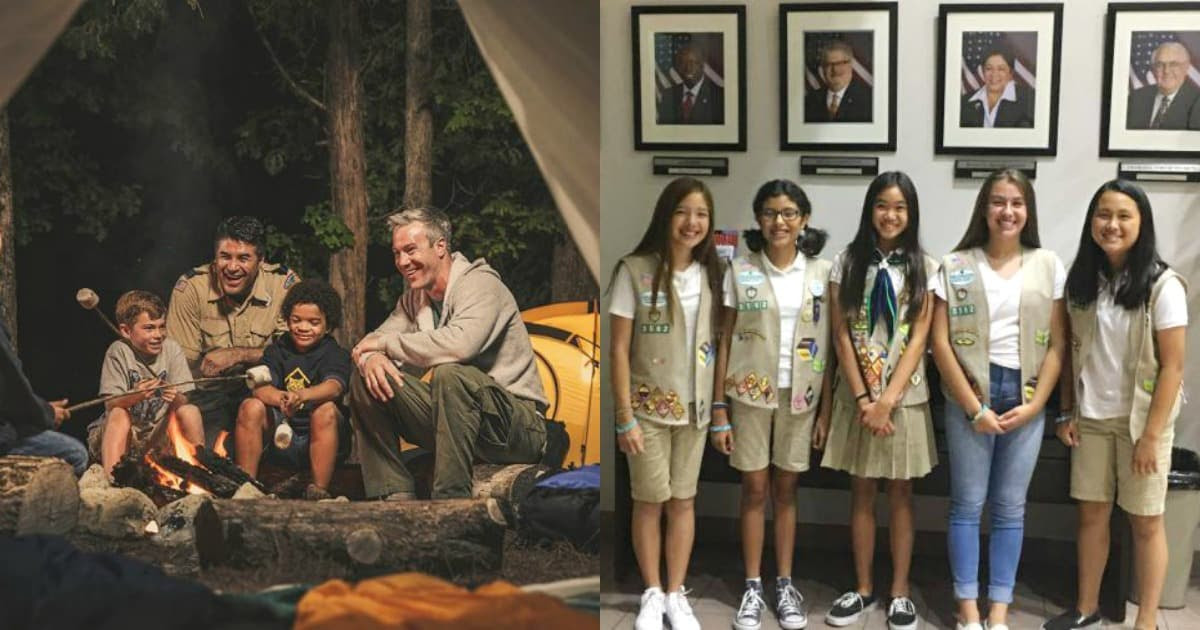 Trans Scouts: Boy Scouts Transition
To Brave New World
Schools, Boy Scouts and other foundational American institutions, have been taken over by social engineers like Rex Tillerson. The latest shoe to drop, admitting girls to the Boy Scouts, follows Tillerson embrace of homosexual scouts, then homosexual scout leaders.
BOY SCOUTS WILL ADMIT GIRLS,
ALLOW THEM TO EARN EAGLE SCOUT RANK
SEE: http://christiannews.net/2017/10/12/boy-scouts-will-admit-girls-allow-them-to-earn-eagle-scout-rank/;
“We believe it is critical to evolve how our programs meet the needs of families interested in positive and lifelong experiences for their children,” said Michael Surbaugh, chief executive of the Boy Scouts.
The scouting board of directors voted unanimously to make the historic change in an organization that has been primarily for boys since its founding more than 100 years ago.

Starting next year, young girls can join Cub Scout units, known as dens. Local scouting organizations can choose to have dens for girls and dens for boys. "Cub Scout dens will be single-gender — all boys or all girls," the organization said in a statement.
A separate program for older girls will be available in 2019, the Boy Scouts said, enabling them to earn the rank of Eagle Scout.
The Boy Scouts said the moves reflect the changing nature of American life, adding to the appeal of a scouting program that can serve the entire family.
BSA said it commissioned two nationwide surveys that showed parents not involved in scouting had high interest in getting their daughters signed up for both Cub Scouts and Boy Scouts.

Girls are now part of four scouting programs — Venturing and Sea Scouting, geared toward outdoor activities; Exploring, a career-oriented mentoring program; and STEM, focusing on science and math. But those programs have not offered a path to Eagle Scout for girls.
Earlier this year, the National Organization for Women urged the Boy Scouts to admit girls to the entire program, supporting the efforts of a New York teenager, Sydney Ireland, to attain the rank of Eagle Scout, as her older brother did.
"I just want to do what the Boy Scouts do — earn the merit badges and earn the Eagle Award," she told NBC News. "The Girl Scouts is a great organization, but it's just not the program that I want to be part of. I think girls should just have the opportunity to be a member of any organization they want regardless of gender."
In the past, the Girl Scouts have been cool to the idea of admitting girls into the Boy Scouts, citing research that showed many girls learn best in an all-female environment.
"We are unparalleled in our ability to build great female leaders who contribute to society at every level," said Andrea Bastiani Archibald, a psychologist who helps guide the Girl Scouts.
_____________________________________________________
SEE ALSO:

The Boy Scouts of America (BSA) announced October 11 that it will acquiesce to “requests” that it allow females into its ranks, welcoming girls into its Cub Scout program (traditionally for younger-aged boys) and offering “a Scouting program for older girls that will enable them to advance and earn the highest rank of Eagle Scout,” according to a BSA press release.
In a statement, the BSA’s CEO Michael Surbaugh insisted that the move “is true to the BSA’s mission and core values outlined in the Scout Oath and Law. The values of Scouting — trustworthy, loyal, helpful, kind, brave, and reverent, for example — are important for both young men and women.” He added that it was necessary for the BSA to change “how our programs meet the needs of families interested in positive and lifelong experiences for their children. We strive to bring what our organization does best — developing character and leadership for young people — to as many families and youth as possible as we help shape the next generation of leaders.”
The organization explained that beginning in 2018, parents will have the option to enroll a daughter into Cub Scouts, with existing packs choosing to establish a new girl “pack,” establish a pack that consists of separate girl “dens” and boy dens, or remain an all-boy pack. The organization emphasized that “Cub Scout dens will be single-gender — all boys or all girls.”

Similarly, by 2019 the Boy Scouts will establish a program for older girls that will allow them to go through the traditionally all-boy program and even earn the coveted “Eagle Scout” rank — a singularly prestigious honor that over the past century has been bestowed upon such notable men as astronaut Neil Armstrong, President Gerald Ford, adventurer Steve Fossett, film director Michael Moore, former Texas Governor Rick Perry, General William Westmoreland, and Wisconsin Governor Scott Walker, to name just a few.
The latest move is consistent with a conspicuous cultural cave-in the BSA has suffered over the past several years. While for over a century the Boy Scouts steadfastly maintained a policy against immoral behavior and lifestyles, in 2014 BSA officials announced that the organization would allow boys who self-identify as homosexual to join its ranks.
And while it had faced a high-profile scandal that revealed decades of the abuse of boys by scout leaders, in 2015 the organization announced that it would allow openly homosexual adults to serve as scout leaders.
The Associated Press reported that the latest BSA policy change “was hailed by Zach Wahls, an Eagle Scout who played an active role in pressuring the BSA to end its ban on gays. However, he urged the Boy Scouts to take one more step and end its exclusion of atheists and non-believers who do not profess a 'duty to God.'”
However, many others have responded to the BSA cultural cave-in by ending their involvement in the Boy Scout program and putting their boys into alternative programs such as Trail Life USA, which states that its mission is “to guide generations of courageous young men to honor God, lead with integrity, serve others, and experience outdoor adventure.”
Among those criticizing the latest BSA policy change is the leadership of the Girl Scouts USA (GSUSA), which understandably fears that the welcoming of girls into Boy Scouts will result in fewer girls joining GSUSA. But it is also ironic, since the Girl Scouts’ own cultural slide from traditional values has also led to many parents choosing alternative youth programs such as American Heritage Girls.
Lisa Margosian, chief customer officer for GSUSA, said that her organization was “blindsided” by the BSA announcement. “We’ve had 105 years of supporting girls and a girl-only safe space,” Margosian said. “So much of a girl’s life is a life where she is in a coed environment, and we have so much research and data that suggests that girls really thrive in an environment where they can experiment, take risk, and stretch themselves in the company of other girls.”
In August GSUSA President Kathy Hopinkah Hannan sent a letter to BSA President Randall Stephenson accusing his organization of trying to recruit girls into the BSA at the expense of the Girls Scouts. “I formally request that your organization stay focused on serving the 90 percent of American boys not currently participating in Boy Scouts ... and not consider expanding to recruit girls,” Hopinkah wrote in her missive.
Hannan wrote that “despite offering to engage in a constructive, collaborative sharing process, we were disappointed in the lack of transparency as we learned that you are surreptitiously testing the appeal of a girls' offering to millennial parents.” She also accused BSA leaders of making “disparaging and untrue remarks about Girl Scout programming,” and making “subtle implications about the weakness of Girl Scouts' long term market strength.”
The New York Times quoted one longtime Boy Scout Leader, Joseph Carballo, whose two sons are Eagle Scouts, as saying that girls have no place in Boy Scouts. “Boys and girls should have separate organizations for activities,” he said. “There is an organization for girls. It’s called the Girl Scouts.”
Similarly, Bob Adelmann, an Eagle Scout and longtime writer for the The New American, decried the Boy Scouts' continued slide into cultural compromise. “The Boy Scouts was at one time in our nation an esteemed and worthy organization because of its commitment to helping form generations of boys into solid and dependable young men,” he recalled. “Now it has become little more than a sad footnote in history, known more for compromise than commitment to the boys and families it claims to serve. The welcoming of girls into its ranks is one more predictable step on its way to irrelevance.”

Posted by John at 3:40 PM Links to this post

SEE: https://en.wikipedia.org/wiki/Youth_Risk_Behavior_Survey
FEDERAL SURVEYS ASK SCHOOL CHILDREN
ABOUT SEX & HOME LIFE
In a deeply controversial survey given to school children across the country, federal authorities improperly solicit information about everything from the sexual and drug habits of children to home and family life. Dubbed the “National Youth Risk Behavior Survey”,
the scheme has attracted outrage from parents.
Full Article: http://bit.ly/2ybzZEw
Posted by John at 3:18 PM Links to this post