Mauricia John, Sociology Program, published "Gender, social class, and discrimination: an analysis of English proficiency amongst Caribbean immigrant youth" in Migration & Development (2016).
ABOVE FROM: https://www.kutztown.edu/academics/colleges-and-departments/liberal-arts-and-sciences/departments/anthropology-and-sociology/faculty.htm
PROFESSOR OFFERS STUDENTS EXTRA CREDIT
TO OPPOSE TRUMP
A college professor paid by taxpayers to “educate” students caused a scandal by offering extra credit to her victims if they helped oppose the Trump-backed tax reform plan going through Congress. After making headlines and sparking a massive outcry, the supposed educator backed down from the plan. But the scheme nevertheless offers important insight into the disaster that is today's government “education” system. According to various news reports, Kutztown University Professor Mauricia John urged students to participate in a protest against the Republican plan to reduce taxes and simplify the tax code. “Please join your faculty as we rally against the GOP Tax Bill that has serious implications to you and on Higher Education,” wrote John, a professor in the far-left Anthropology and Sociology Department. “This is an opportunity to gain additional extra credit.” Article: http://bit.ly/2z9ljbm
Posted by John at 4:14 PM

GEERT WILDERS: PEW RESEARCH STUDY ON MUSLIM MIGRATION CONFIRMS IT IS "TIME TO GET TOUGH"

GEERT WILDERS: PEW RESEARCH STUDY
ON MUSLIM MIGRATION CONFIRMS
IT IS "TIME TO GET TOUGH"
BY CHRISTINE DOUGLASS-WILLIAMS
SEE: https://www.jihadwatch.org/2017/12/geert-wilders-pew-research-study-confirms-it-is-time-to-get-tough;
Dutch Parliamentarian and the leader of the Party for Freedom in The Netherlands, Geert Wilders, warns…


The bell is tolling for Europe. All the warning signs are turned on red. A demographic catastrophe is in the making. If Europe fails to make a stand, its Judeo-Christian civilization is about to be blown away.
And now a Pew research study has verified that even if the mass influx of Muslim refugees into Europe ended now, that the Muslim population will continue to surge…We must have the courage to protect our borders and introduce travel bans, as President Trump is doing in the US…

Two years ago, the Washington Post published an article entitled: “Europe’s fear of Muslim refugees echoes rhetoric of 1930s anti-Semitism,” which — as is evident from the title — compared those who have concerns about the massive Muslim influx into Europe to the Nazis of the 1930’s, ready to murder Jews by the millions. The article absurdly stated that “part of that hostility was fueled, as some of the European grievances are now, by stereotypes of the refugees as harbingers of a dangerous ideology.”
Comparison of Muslims and Jews has become an offensive habit among groups that are advancing their pro-migration agenda. It was Muslims, including the Grand Mufti of Jerusalem, who worked with the Nazis toward their goal of wiping out the Jewish race. It is eyebrow raising that even some Jews of today — whose families experienced the Holocaust — indulge in such bizarre comparisons between Nazism and responsible concerns about the Muslim hijrah. The Jews were targeted only because of their race, and lies were spun against them to fan the flames of racism, hatred and ultimately mass murder.
Muslims are not being targeted because of intolerance. Islam is not a race. Mass Muslim migration into Europe has proven to be a menace; given valid security threats posed to European society and culture, there is reason to be troubled about their hijrah into Europe, and more broadly, into the West. No one would have thought that in so short a space of time, Europe would house sharia patrols, sharia courts, proliferating and expanding no-go zones, and would be home to harmful cultural practices including FGM, honor violence, the religiously mandated taking of infidel women through mass rapes. Muslim hate preachers openly proclaim doctrines of death for apostasy, homosexuality, as well as call for death to Jews and preach the inferior status of women (including wife beating and spousal rape). Now drives to shut down free speech using the victimhood narrative of “Islamophobia” is ever-expanding. More important is the historically expansionist Islamic ideology that divides the world into two camps: the House of War (Dar al harb) and the House of Islam (Dar al Islam).
The goal to Islamize Europe, about which Geert Wilders has long warned, is rooted in such doctrine:


Significantly, the Islamic calendar counts the hijrah, not Muhammad’s birth or the occasion of his first “revelation,” as the beginning of Islam, implying that Islam is not fully itself without a political and military component.
To emigrate in the cause of Allah – that is, to move to a new land in order to bring Islam there, is considered in Islam to be a highly meritorious act. “And whoever emigrates for the cause of Allah will find on the earth many locations and abundance,” says the Qur’an.
“And whoever leaves his home as an emigrant to Allah and His Messenger and then death overtakes him, his reward has already become incumbent upon Allah.

According to Wilders, if Europe continues to “leave the door open,” it will “soon be driven out of it,” losing its identity and freedoms. He further warns:

Given the chaos that has gripped Europe, Wilders’ longtime warnings are obviously accurate. 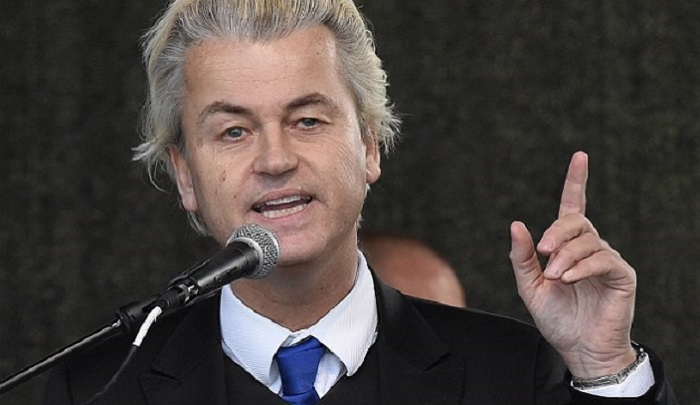 “Wilders: The Pew Report on Muslim Migration to Europe is a Wake-up Call — It is Time to Get Tough”, by Geert Wilders, Breitbart, December 11, 2017:


The bell is tolling for Europe. All the warning signs are turned on red. A demographic catastrophe is in the making. If Europe fails to make a stand, its Judeo-Christian civilization is about to be blown away.
Last week, the renowned Pew Research Center published updated figures about the growing Muslim population in the broader EU region (i.e. the 28 European Union member states plus Switzerland and Norway). The figures are truly dramatic. Unless there are radical changes to the present policies towards immigration, 30.6% of the population in Sweden will be Islamic by the middle of the century. Sweden is as good as finished.
But the situation elsewhere is hardly better. 19.7% in Germany, 18% in France, 17.2 % in Britain, and 15.2% in the Netherlands. This is what Pew expects to happen if the migration patterns continue at the 2014-2016 levels. Pew also calculated what will happen if the current refugee crisis comes to an end but regular immigration continues at present level.
Under this scenario, the number of Muslims by 2050 is still bound to rise to 20.5% in Sweden, 17.4% in France, 16.7% in the UK, 12.5% in the Netherlands, and 10.8% in Germany.
Last week, I posted a tweet with a picture from the Pew report, accompanied by the text “An existential problem: our population is being replaced. And it will get much worse if we don’t de-Islamise soon!” A few hours later, the tweet was censored in France. In the country of President Emmanuel Macron, the people are not allowed to know the truth.
The proliferation of Islam is bad news for Europe; the threat of Islamic terrorism is omnipresent. This Christmas season, concrete barriers have become a familiar sight around festive markets all over Western Europe.
But Europe has also become acquainted with female genital mutilation, honour killings, polygamy, rising anti-Semitism, and appalling examples of misogyny. Recent academic studies indicate that the vast majority of European Muslims find their Islamic rules more important than Europe’s secular democratic laws, while significant numbers (up to 11% in the Netherlands according to the University of Amsterdam) find it acceptable to use violence in the name of Islam.
More Islam means more violence and intolerance.
Unfortunately, Europe’s demographics might shift even more rapidly than Pew predicts. As Breitbart London pointed out, immigration trends tend to be at – and often beyond – the highest projections established by migration observatories. Moreover, Pew seems to be cautious in its calculations.
Last February, Elsevier Magazine, the Dutch equivalent of Newsweek, asked researchers to calculate what the effects of immigration would be for the Netherlands. They predicted that, in case of a ‘generous’ immigration policy, the Islamic population will surge from 7% today to 19% by 2060. In case of a continuation at the present levels, it will hit 14%. This is well over the Pew predictions.
Pew also overlooks a very important demographic fact relating to the influx of 2 million so-called ‘refugees’ into Europe in 2015-2016. Not only were 78% of these ‘refugees’ Muslims, but they were overwhelmingly young males. Of the 1.1 million ‘refugees’ in Germany alone, 800,000 were males below 25 years of age.
Pew is also looking exclusively at the effects of Islamic immigration. Islam is, indeed, the largest threat to Europe’s Judeo-Christian and humanist civilization, but the devastating effect of mass immigration is much broader.
In 2010-2016, 53% of all migrants to Europe were Muslims, while 47% were non-Muslim. Both groups consist to a large extent of young males. They are an enormous strain on Europe’s welfare systems. What we get are mostly unskilled and low-skilled workers, who do not benefit our societies but only cost us money. Over half of the people on welfare in the Netherlands today are non-Western immigrants.
If nothing happens, worse is still to come. The African population is bound to quadruple from its present one billion to four billion by the end of the century. One-third of the Africans want to move abroad. Many want to come to Europe. Over half of the African population is Islamic and they are the fastest growing group.
Last week, at the Europe-Africa summit in Abidjan, Ivory Coast, the European countries agreed to mobilize billions of investments for Africa. This is money down the drain. Billions of development money are already spent in Africa each year, which either end up in the hands of corrupt regimes or benefit the middle class which is exactly the group of people most eager to emigrate to Europe……
The EU policy is a march of folly. More than six million migrants are currently waiting in countries around the Mediterranean to cross into Europe. Because they break in through the back windows, the EU is opening the front door of ‘the house of Europe.’
This is not what we want. We have to stop the suicidal madness of the EU elites. We must stop the millions wanting to come to the ‘house of Europe’, because this house is our house.
If we leave the door open, we will soon be driven out of it. We will lose our identity and our freedom. Our existence is at stake. We must safeguard it. This can only be done if we have to courage to adopt a new strategy. As Winston Churchill said: “Courage is the greatest virtue because it guarantees all the rest.”
Instead of acting as a magnet to young Africans and Asians, Europe has to have the courage to be exactly the opposite. We must have the courage to protect our borders and introduce travel bans, as President Trump is doing in the US.
The courage to send every boat with illegal migrants back, as Australia does. The courage to restrict legal immigration instead of expanding it. The courage to start the immediate repatriation of illegal immigrants. The courage to de-Islamize, and be unwelcoming to Islam. Instead of being soft, Europe must be tough. If we fail, our national identity will be in danger, our freedom will be in jeopardy, the Europe we know will cease to exist. And, as the Pew figures show, it will cease to exist soon.