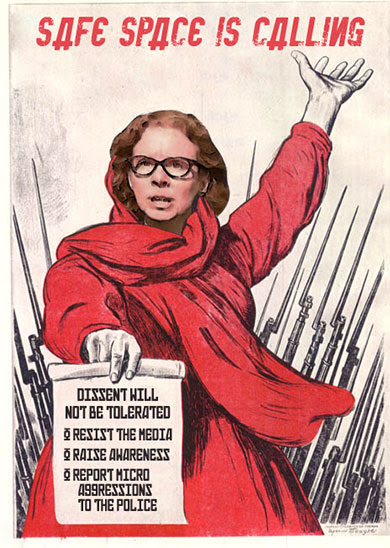 Published on Nov 10, 2015
Unless actual liberals stand up for the virtues of true intellectual tolerance, the future for free speech in the west is doomed.

Mentally Ill Children Control Society
Starting With Barrages of Four Letter Curse Words on Yale University Campus
Published on Nov 9, 2015
Alex Jones goes off on the insanity displayed by today's students as a young woman shouts down a Yale professor for having an opposing view point than her.

Yale Students Harass Professor For Defending Halloween
Published on Nov 9, 2015
Yale University has been hit by controversy in the past week after professor Erika Christakis, associate headmaster of the school’s Silliman College, sent an email to the college’s members suggesting that they shouldn’t be overly sensitive about Halloween costumes that engage in “cultural appropriation.” Instead, Christakis encouraged students to tolerate them and avoid trying to censor expression.

“Is there no room anymore for a child or young person to be a little bit obnoxious … a little bit inappropriate or provocative or, yes, offensive?” Christakis wrote. “American universities were once a safe space not only for maturation but also for a certain regressive, or even transgressive, experience; increasingly, it seems, they have become places of censure and prohibition.”

In response, Christakis and her husband Nicholas (Silliman’s headmaster) have been besieged by calls for their resignation by students who say they have made Yale a dangerous place for black students. The controversy has become even more intense because of simultaneous allegations that the school’s Sigma Alpha Epsilon fraternity chapter held a “white girls only” Halloween party. http://www.infowars.com/yale-student-...

"HAUNTED BY THE U.S. CONSTITUTION"
Hidden Camera: Officials at Cornell & Yale Shredding/Ripping the Constitution
as it "Triggers" Students' Nightmares
Published on Nov 5, 2015
Officials at Cornell, Syracuse, and Yale destroy U.S. Constitution. Cornell's Elizabeth McGrath shreds the constitution, Syracuse's Sheila Johnson-Willis, cuts it up with a pair of scissors, and Yale's Jason Killheffer actually uses his bare hands to rip the constitution to shreds.

Why Colleges Shred the Constitution
Published on Nov 4, 2015
Alex Jones covers an undercover video which showed two separate colleges jump at the chance to shred the American Constitution to protect someone from being "triggered".

BEN CARSON THINKS 6,000 PAGE TPP IS FINE FOR AMERICA~BUT DID HE READ IT?

Carson Endorses TPP, Pretending He Knows What’s In It; Fudges "Facts" in His Books Where His Memory Fails.
Disingenuous or Liar?
Biographies or Fiction Novels?

What Is TPP And Why Does It Matter?
Published on Oct 11, 2015
As demonstrations regarding the proposed TPP deal and TTIP countinue around the world, people are wondering, what is TPP? In this video I try to explain the Trans-Pacific Partership in just over two minutes.
In basic terms, TTP is an agreement between 12 Pacifc Rim countries ( the US, Japan, Malaysia, Vietnam, Singapore, Brunei, Australia, New Zealand, Canada, Mexico, Chile and Peru.) that will cut down on regulations and tariffs in order to make trade between the countries freer and easier.
The issues with the deal relate to how it could end up handing out more power to big coporations, and how it may take away workers rights and promote unhealthy competition between the different countries workers. Many just see it as a feeble attempt to bat away at China, currently a grower superpower.
Yet Obama is pushing forward with the deal, he wants this to be his legacy and already has special powers which allow him to fast track the deal, preventing both the Senate and Congress from amending the deal. Will it go through? What will it be like?
Here is the transcript if you're interested:
What Is TPP And Why Does It Matter?
The Trans-Pacific Partnership or TPP for short is a proposed free trade agreement, between 12 Pacific Rim countries.
These 12 countries include
the US,
Japan,
Malaysia,
Vietnam,
Singapore,
Brunei,
Australia,
New Zealand,
Canada,
Mexico,
Chile
and Peru.
The agreement is aimed at deepening economic ties between the 12 countries, by cutting regulations and tariffs, in order to allow the countries to freely trade amongst each other, which would supposedly boost economic growth.
The agreement would make the `12 countries united in a single market, similar to the EU.
TPP is very important, collectively, it affects the lives of around 800 million people, and the deal seems very remarkable to say the least, given the different standards that each country has, such as Environmental protection and workers’ rights.
Critics argue that the deal is simply a way of keeping China at bay, they say that the deal will give more power to big corporations, and allow them to treat workers unfairly.
There is also an implication that some sweeping changes are being secretly negotiated, details which the public currently has no idea about.
Currently, the deal has not yet been made permanent, it will come before congress in the US during the Presidential Primaries.
The president also has a right to fast track the deal, meaning opponents of it within the Senate and Congress are able to review the deal, but not amend it.

Carson Spurns GOP Base With Support for ObamaTrade TPP