Feminists Want Total Family Destruction
Alex Jones breaks down how the family unit is under attack and why the globalists want to see it dead.
How Feminism Destroyed the Nuclear Family

The patriarchal family unit was once accepted as the bedrock of civilization and essential for the raising of healthy children. But after centuries of sustained assault by feminist zealots, the family is in precipitous decline.
Radical Feminism Vs Marriage:
Why Marriage Matters
The Inevitable Collapse of Feminist Societies

UN REFUGEE CHIEF SAYS EUROPE MUST
PREPARE SYSTEMS TO COPE WITH
BIGGER MIGRANT FLOWS
BY CHRISTINE DOUGLASS-WILLIAMS
SEE: https://www.jihadwatch.org/2018/01/un-refugee-chief-says-europe-must-prepare-systems-to-cope-with-bigger-migrant-flows;
The hijrah continues to be escorted into Europe by the United Nations, which has signaled to Europe that whatever the price-tag, whatever the cost — including mass rapes, violent no-go zones, jihad attacks and other abuses — European citizens must accommodate Muslim migrants and expect more to flow in.

The Visegrad group (Hungary, Poland, Czech Republic, Slovakia) — especially Hungary and Poland — has resisted the hijrah, and have managed to “cut illegal immigration by 99 percent.” For this, the UN singled it out as being cruel in rejecting innocent people who were “fleeing war and persecution.” Yet that is questionable, and all the while Christians continue to be wiped out in the Middle East with nary a whisper from the UN. 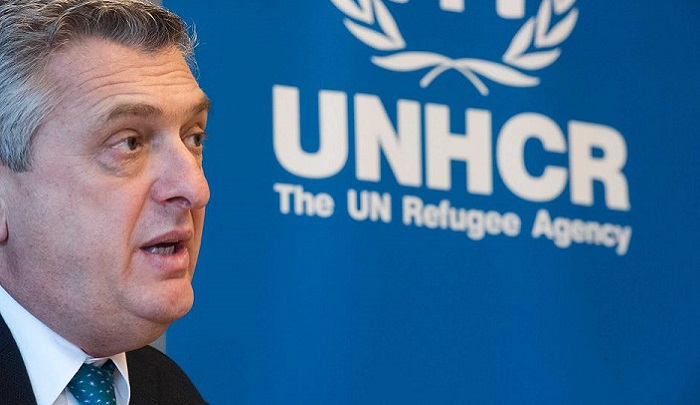 
United Nations refugee chief Filippo Grandi has said that EU nations must prepare their asylum reception systems to cope with bigger migrant inflows.
Speaking to Refugees Deeply in Davos, the UN High Commissioner for Refugees (UNHCR) said the “big failure” in Europe’s response to the migrant crisis in 2015 and 2016 was that governments visibly struggled to house, feed, and clothe the massive influx of third world migrants who marched on the continent after German Chancellor Angela Merkel opened the border.
“We need to work more with Europe, and other countries that receive refugees, to make reception systems more effective for larger numbers than before,” he said, lamenting that migrant reception systems in the bloc had “cracked under the pressure” of huge inflows……
The Italian diplomat is not a fan of walls, as Breitbart London noted in September when Grandi blasted Hungary’s border fences for doing their job.
On a visit to the Visegrád nation’s border, where walls have cut illegal immigration by 99 per cent, the UNHCR boss complained: “When I was standing at the border fence today, I felt the entire system is designed to keep people, many of whom are fleeing war and persecution, out of the country.”
In the interview, which was published on Wednesday, Grandi also told Refugees Deeply co-founder and executive editor Lara Setrakian that Europe should speed up granting passports to refugees, claiming that the privileges of citizenship aid migrants’ integration.
For “wealthy states, especially European states”, resettling large numbers of refugees on a scale like that seen at the height of the migrant crisis is perfectly doable, he insisted.
“Of course it requires an effort. In the case of Europe, it also requires regional cooperation, something that is politically difficult,” the Milanese figure said, remarking that “European Commission leaders in Brussels” appear to be working along lines which would further UNHCR goals.
Breitbart London reported Thursday on EU migration commissioner Dimitris Avramopoulos’s announcement that it would be “unacceptable” for any European nation to refuse the resettlement of third world asylum seekers, declaring that mass migration from Africa and the Middle East is part of the “principles and values” on which the bloc was built.