SPREADING THE FALSE GOSPEL
OF THE ONE WORLD RELIGION:
WE ARE ALL INTERCONNECTED BY OUR OWN DIVINITY?


Oprah Winfrey shared her vision for a meaning life with the Stanford community as the Rathbun Visiting Fellow for 2015. At the end of her daylong campus visit, she delivered "Harry's Last Lecture on a Meaningful Life." The annual address honors the late Stanford Law School Professor Harry Rathbun.
SEE OUR MANY POSTS ABOUT OPRAH WINFREY
AND HER PAGAN PROPENSITIES

Letter to the Editor of Lighthouse Trails Research: www.lighthousetrailsresearch.com


I’m writing this because of Oprah Winfrey’s influence in areas most Christians would never suspect: in the top universities in the U.S.
Oprah agreed to be Stanford University’s Office of Religious Life’s “2015 Rathburn Visiting Fellow.”
See link:
http://news.stanford.edu/news/2015/march/rathbun-oprah-winfrey-031115.html
This is an honor bestowed by Stanford’s Office of Religious Studies. She not only has special access to Stanford students through this coming year of 2015, she also delivered the annual Stanford lecture on “A Meaningful Life” this past April 20 at Stanford Memorial Church (which is on Stanford’s campus).
Stanford’s Memorial Church holds 1,100 people. You may be surprised to hear that many Stanford students not only attended but lined up outside the church several hours before Oprah’s 7 pm speech, just to get good seats, and many clamored at the end of the 1 1/2 hour event to get a “selfie” with Ms. Oprah Winfrey herself.
Oprah talked for 1 hour, with a Q & A at the end.  Two highlights of her talk were:

1) Leading about 1000 Stanford students in a 5 minute meditation session (inhale, exhale, etc.) telling them to think of all the conscious choices they made up to this point, that determined their destiny, that led them to Stanford University.
2) Oprah: “I learned that I could control my life. You are the master of your fate . . . you are the captain of your soul. I took control and went to my space . . . My space . . . the universal energy . . . I tapped into that space of divine flow, where all beings, all things are connected. That space is real. You cannot have a meaningful life without having spiritual self-reflection. Know who you are and why you are here. When you tap into that space, divine flow, that universal energy, you become untouchable in what you are called to do.”

This is what Warren B. Smith has been warning about for many years, the universal lie that “We are all one, we are all interconnected. God is in everyone and everything.”  Oprah Winfrey was able to spread this lie to an attentive audience of young Stanford University students. See Lighthouse Trails Oprah articles and booklets: http://www.lighthousetrailsresearch.com/blog/?cat=2595.
So glad you continue warning about Oprah Winfrey’s pervasive influence among evangelicals, as well as in the secular media, etc.

MONICA LEWINSKY BLAMES INTERNET: "PUBLIC SHAMING AS A 'BLOOD SPORT' HAS TO STOP"~PROGRESSIVE COMPASSION & EMPATHY HER FIX~BUT WHAT ABOUT FREEDOM OF SPEECH?

LEWINSKY ACCUSES
A LIBERAL'S WORLDVIEW:
VICTIMS OF SHAME, GOSSIP, SLANDER LIMITED TO WOMEN, MINORITIES
& THE GAY COMMUNITY?
ALL BECAUSE OF THE UNREGULATED INTERNET!
BEMOANS
"A CULTURE OF HUMILIATION" POPULATED BY LIBERALS THEMSELVES;
BILL CLINTON'S EXTRAMARITAL AFFAIRS
SHOULD NOT HAVE BEEN EXPOSED?
Monica Lewinsky, Bill Clinton's Lover:

The Price of Shame
LESSONS NOT LEARNED
17 YEARS & STILL A LIBERAL
FIRST AMENDMENT RIGHTS ARE ABSOLUTE,
BUT ARE AT RISK IF THEY HAVE TO
PASS THROUGH HER FILTERS
NEEDLESSLY SUFFERED BECAUSE OF THE INTERNET'S OPENNESS?

Posted by John at 8:49 AM Links to this post

"FOR THE GREATER GOOD", NAZI STYLE

Even some police are surprised

by Kit Daniels
SEE: http://www.infowars.com/feds-exempt-mraps-from-prohibited-police-equipment-despite-admitting-theyre-militaristic-in-nature/;
republished below in full unedited for informational, educational, and research purposes:

Although Mine Resistant Ambush Protected vehicles (MRAPs) are “militaristic in nature,” cops should use them because they have “significant utility for law enforcement operations,” according to President Obama’s task force on police equipment.

The interagency Law Enforcement Equipment Working Group (LEEWG), which was established by Obama under Executive Order 13688, purposely exempted MRAPs and other military vehicles from a list of equipment prohibited from police use.
To explain the exemption, LEEWG described MRAPs as equipment “that could be seen as militaristic in nature yet also may have significant utility for law enforcement operations.”
“This includes several types of armored vehicles, such as MRAP vehicles transferred via the [Pentagon’s] 1033 program and armored vehicles manufactured commercially,” the LEEWG report stated.
LEEWG even suggested that it was okay for university police departments to use MRAPs as long as they have “policies” in place, such as painting “Emergency Rescue” on the side, as if that’s going to prevent abuse from happening.
“The University of Texas System Police (UTSP) has a policy on Emergency Rescue Armored Personnel Vehicle (MRAP), which specifies that the ‘exclusive operational purpose’ of the MRAP is to enhance the physical protection of its occupants,” the LEEWG report said. “Accordingly, the policy requires that any MRAP vehicle display the words ‘Emergency Rescue,’ so that its purpose is clear to the community.”
The editor-in-chief of a major law enforcement web site, Doug Wyllie of PoliceOne.com, thought it was strange that MRAPs were exempted.
“Recall that the MRAP was purpose-built for the theater of war in Iraq and Afghanistan when our soldiers were being killed and maimed because the Humvees and M35/deuce-and-a-halfs were being shredded like wet cardboard,” he wrote. “The design of the MRAP is specific to answer the threat of an IED constructed from unexploded military ordinance.”
Last year the Spokane Co., Wash., Sheriff’s Dept. came under fire after a deputy claimed their MRAP was needed to deal with the threat posed by “constitutionalists.”
“I mean, we’ve got a lot of constitutionalists and a lot of people that stockpile weapons, lots of ammunition,” the deputy said. “They have weapons here locally.”
Considering how much the Obama administration hates the Second Amendment, is it really that surprising that they would encourage police to use MRAPs?

Posted by John at 7:47 AM Links to this post

OBAMA'S HYPOCRITICAL LYING ABOUT "ASKING LOTTERY WINNERS" WHO DERIVED THEIR WEALTH BY CHANCE, INHERITANCE, THEFT, AND/OR THROUGH OTHERS' EFFORTS 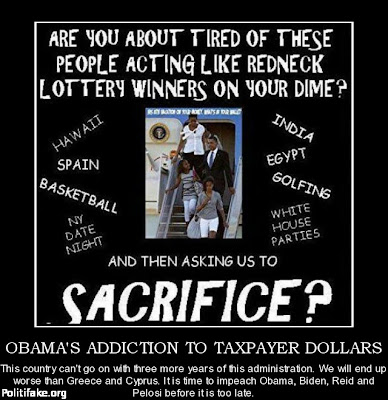 FEELING CONVICTED ABOUT YOUR WEALTH YET?
TIME TO REPENT & LET GOVERNMENT TAKE MORE FOR THE POOR 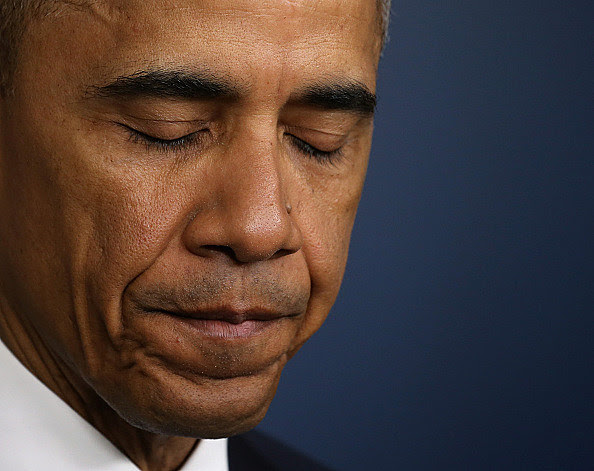 LET OBAMA DECIDE WHO THE WINNERS ARE?
NOT ON YOUR LIFE! 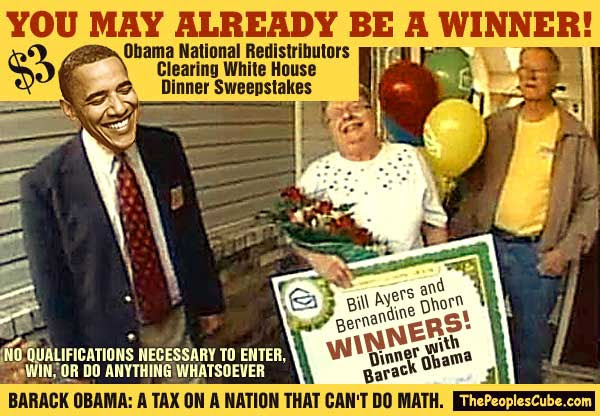 By Thomas Sowell
In a recent panel discussion on poverty at Georgetown University, President Barack Obama gave another demonstration of his mastery of rhetoric — and disregard of reality.
One of the ways of fighting poverty, he proposed, was to “ask from society’s lottery winners” that they make a “modest investment” in government programs to help the poor.
Since free speech is guaranteed to everyone by the First Amendment to the Constitution, there is nothing to prevent anybody from asking anything from anybody else. But the federal government does not just “ask” for money. It takes the money it wants in taxes, usually before the people who have earned it see their paychecks.
Despite pious rhetoric on the left about “asking” the more fortunate for more money, the government does not “ask” anything. It seizes what it wants by force. If you don’t pay up, it can take not only your paycheck, it can seize your bank account, put a lien on your home and/or put you in federal prison.
So please don’t insult our intelligence by talking piously about “asking.”
And please don’t call the government’s pouring trillions of tax dollars down a bottomless pit “investment.” Remember the soaring words from Barack Obama, in his early days in the White House, about “investing in the industries of the future”? After Solyndra and other companies in which he “invested” the taxpayers’ money went bankrupt, we haven’t heard those soaring words so much.
Then there are those who produced the wealth that politicians want to grab. In Obama’s rhetoric, these producers are called “society’s lottery winners.”
Was Bill Gates a lottery winner? Or did he produce and sell a computer operating system that allows billions of people around the world to use computers, without knowing anything about the inner workings of this complex technology?
Was Henry Ford a lottery winner? Or did he revolutionize the production of automobiles, bringing the price down to the point where cars were no longer luxuries of the rich but vehicles that millions of ordinary people could afford, greatly expanding the scope of their lives?
Most people who want to redistribute wealth don’t want to talk about how that wealth was produced in the first place.
They just want “the rich” to pay their undefined “fair share” of taxes. This “fair share” must remain undefined because all it really means is “more.”
Once you have defined it — whether at 30 percent, 60 percent or 90 percent — you wouldn’t be able to come back for more.
Obama goes further than other income redistributionists. “You didn’t build that!” he declared to those who did. Why? Because those who created additions to the world’s wealth used government-built roads or other government-provided services to market their products.
And who paid for those roads and other government-provided services if not the taxpayers? Since all other taxpayers, as well as non-taxpayers, also use government facilities, why are those who created private wealth not to use them also, since they are taxpayers as well?
The fact that most of the rhetorical ploys used by Barack Obama and other redistributionists will not stand up under scrutiny means very little politically. After all, how many people who come out of our schools and colleges today are capable of critical scrutiny?
When all else fails, redistributionists can say, as Obama did at Georgetown University, that “coldhearted, free-market capitalist types” are people who “pretty much have more than you’ll ever be able to use and your family will ever be able to use,” so they should let the government take that extra money to help the poor.
Slippery use of the word “use” seems to confine it to personal consumption. The real question is whether the investment of wealth is likely to be done better by those who created that wealth in the first place or by politicians. The track record of politicians hardly suggests that turning ever more of a nation’s wealth over to them is likely to turn out well.
It certainly has not turned out well in the American economy under Barack Obama.
Posted by John at 7:21 AM Links to this post