SEE: http://www.ijreview.com/2014/08/171905-gov-bobby-jindal-takes-fight-obamas-doorstep-files-lawsuit-common-core/;
EXCERPT:
Louisiana Governor Bobby Jindal has filed a lawsuit against the Obama Administration which he says is his attempt to stop the U.S. Department of Education from imposing a “national curriculum” on America’s schoolchildren.
Jindal says the federal government is using coercive techniques to make states comply with Common Core standards. He says the “Race To The Top” grant program is being manipulated to put states who don’t comply with the standards at risk to lose billions of federal grant money. The Christian Science Monitor reports :

“Louisiana now finds itself trapped in a federal scheme to nationalize curriculum,” the lawsuit says. “What started as good state intentions has materialized into the federalization of education policy through federal economic incentives and duress.”

Published on Aug 27, 2014
Gov. Bobby Jindal, R-La., a vocal critic of the federal government's role in education, sued the Obama administration Wednesday over its implementation of the Common Core in Louisiana.
"Common Core is the latest effort by big government disciples to strip away state rights and put Washington, D.C. in control of everything," Jindal said in a statement.
During a speech at the Conservative Political Action Conference in March, Jindal slammed the administration, calling its education policies "cynical, immoral and hypocritical.”
VIDEO:
https://www.youtube.com/watch?v=Ey8GuCl1o2w

SEE: http://www.thenewamerican.com/usnews/constitution/item/19005-louisiana-gov-jindal-sues-education-dept-over-common-core;
EXCERPT:
Louisiana Governor Bobby Jindal filed suit in federal court on August 27 arguing that President Obama’s Department of Education has violated the 10th Amendment to the U.S. Constitution and federal law by coercing states to adopt Common Core education standards.
The suit states: “The Tenth Amendment to the Constitution of the United States reserves to the States all ‘powers not delegated to the United States by the Constitution.’ … The Constitution makes no provision for federal power over education policy.”
Posted by John at 5:36 PM Links to this post

PASSIVELY PRAYING FOR OBAMA'S SALVATION IS NOT PROACTIVE & A COP OUT, DEFEATIST & FATALIST~PERMITS THE DESTRUCTION OF OUR GOD GIVEN INHERITANCE UNDER HIS AUTOCRATIC RULE IS ALLOWED TO PROCEED

WHATEVER HAPPENED TO "BIBLICAL STEWARDSHIP"???

"A WORLD WITHOUT BORDERS"
THE POPE WOULD BE PROUD OF THIS CONSPIRACY;
YOUR LOCAL PASTOR WANTS YOU TO PRAY
FOR THEIR SALVATION
(P.S.: AND DO NOTHING ELSE THAT WOULD SEEM POLITICAL) 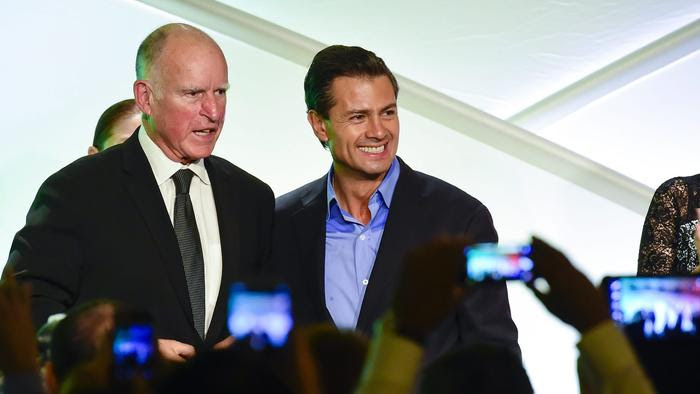 "PLEASED AS PUNCH" WITH THEMSELVES
WHILE THE CHURCHES SAY NOTHING
THAT WOULD JEOPARDIZE THEIR
FREE SPEECH STIFLING
501C3 TAX EXEMPT STATUS
(P.S.: SINCE WHEN DOES A GOVERNOR
MEET WITH A FOREIGN PRESIDENT
TO WORK OUT INTERNATIONAL AGREEMENTS?) 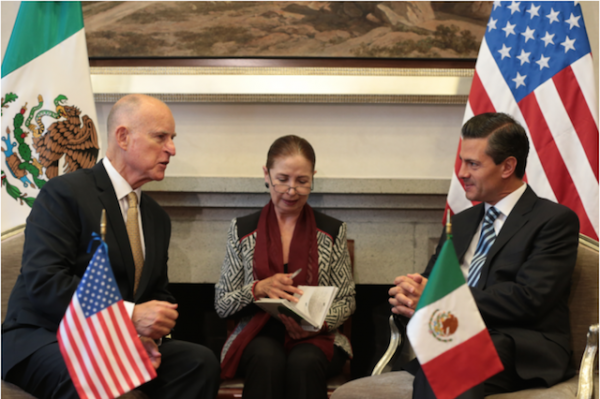 OF CALIFORNIA AND ULTIMATELY THE U.S.

'You're All Welcome in California!'

SEE: http://www.infowars.com/gov-jerry-brown-announces-collapse-of-california-and-ultimately-the-u-s/; republished below in full unedited for informational, educational, and research purposes:

A day prior to the meeting in the California capitol, Brown announced the collapse of the United States and the elimination of its national borders when he declared California to be wide-open to illegal immigration.
“You’re all welcome in California today,” Brown said in Los Angeles on Monday.
Nieto characterized the influx of illegal immigrants as justice for “those who contribute so much to the development of the American society.”
In reality, the influx spells the destruction of American society. Brown’s welcoming of a flood of new illegal immigrants and Nieto’s insistence crossing the border represents social justice will ultimately deal a fatal blow to not only the state, but the nation as a whole.
The growth of illegal and legal immigrants – between 1970 and 2008 the share of California’s population comprised of immigrants tripled from 9 percent to 27 percent – has turned California into a failed state.
It will soon do the same for the country as a whole.

In February, Democrats signaled yet another assail on the economic viability of the state when they proposed legislation that allows illegal immigrants to qualify for healthcare coverage under Medicare.
California is on record as the largest welfare state in the country. The state has one-eighth of the nation’s population and one-third of all welfare recipients.
In 2011 Judicial Watch cited U.S. Census Bureau data to show that families headed up by illegal immigrants are more likely to use welfare programs.
“Even before the recession, immigrant households with children used welfare programs at consistently higher rates than natives,” the organization explained. “Basically, the majority of households across the country benefitting from publicly-funded welfare programs are headed by immigrants, both legal and illegal.”
In Los Angeles County alone during 2013, $650 million was spent on welfare benefits for illegal immigrants, according to Supervisor Michael D. Antonovich of the Department of Public Social Services.
In addition to unbridled welfare benefits, illegal immigrants are provided with in-state tuition breaks. Nearly a decade ago, this scheme, according to the Federation for American Immigration Reform, would cost besieged taxpayers around $289 million a year.

Democrats understand the capital harvested from wide open borders and liberal welfare and healthcare policies – both translate into a political monopoly. Overwhelming numbers of Hispanics vote Democrat. “Hispanics of all ages in the U.S. today are more than twice as likely to identify with or lean to the Democratic Party rather than the Republican Party,” Gallup reported in 2013.
“The immigration proposal pending in Congress would transform the nation’s political landscape for a generation or more — pumping as many as 11 million new Hispanic voters into the electorate a decade from now in ways that, if current trends hold, would produce an electoral bonanza for Democrats and cripple Republican prospects in many states they now win easily,” Politico reported last April.
This political monopoly will, however, come at a tremendous cost. According to one study, the cost to U.S. taxpayers of legalizing the current flood of illegal immigrants would be approximately 6.3 trillion dollars over the next 50 years.

In addition to destroying the economic base of the nation and ultimately impoverishing Americans, unbridled illegal and unrestrained legal immigration will accomplish a primary goal held by the global elite – the destruction of American culture and its heritage grounded in the principles of liberty, private property and individual sovereignty.
“Besides the successful culture of independence, Obama hates the white nature of America,” writes L. Todd Wood. “He is attempting to manage the ethnicity of America and quicken the demise of the white majority. He is attempting to crowd out the American culture of self-reliance and the rule of law with the culture of gang violence of Central America dependent on the federal government. This is a racist strategy that only Hitler could be proud of.”
It is also a strategy the global elite are proud of. If the culture of liberty and the drive for economic prosperity can be successfully destroyed and Americans reduced to third world serfs, the plan for one world government and domination can be realized.
________________________________________

AFTER EUROPEAN TRIP NEXT WEEK

GUTIÉRREZ ON COMING OBAMA EXECUTIVE AMNESTY: 'GET PREPARED'
PROPAGANDA ALERT: WITHOUT NATIONAL ID CARD, YOU MAY BE BANNED FROM BOARDING AIRPLANES IN 2016
In California, talking immigration:
As Obama’s staff begins a mainstream media propaganda campaign ahead of amnesty by Executive Order, the Mexican president scolds American states who don’t extend benefits to illegal aliens. And American citizens from states that haven’t enacted the federal government’s Real ID program will soon be denied access to federal buildings and even denied air travel.

Is there anyone in elected office standing up for the American rule of law and sovereignty — namely the security of our southern border? This story just enraged me beyond belief.
CNS News reports (http://cnsnews.com/news/article/mexican-president-praises-california-immigration-policies) that, “Mexican President Enrique Pena Nieto praised Gov. Jerry Brown and state lawmakers Tuesday for approving a series of immigrant-friendly laws, saying California is taking a lead role in the absence of national immigration reform. He specifically mentioned a law that allows immigrants in the country illegally to obtain driver’s licenses, a law that has yet to take effect because a final decision has not been made about the appearance of the licenses. California also allows immigrants here illegally to apply for state-funded college scholarships and aid at public universities. And earlier this month, Brown and the Democratic legislative leaders announced a plan to spend $3 million to provide legal help for the estimated 3,900 unaccompanied immigrant children from Central America who are in the state.”
“Mexican President Enrique Pena Nieto addressed the California Assembly chamber by invite of Gov. Jerry Brown during a joint convention of the state Legislature at the Capitol in Sacramento, Calif., Tuesday, Aug. 26, 2014. Pena Nieto’s visit followed a trip to Mexico by Brown earlier in the summer, when the governor discussed climate change and trade.”
Ok, trying to calm down….but here we have another progressive socialist elected official who fails to mention anything to Pena Nieto about an American Marine being held in a Mexican jail, Sergeant Andrew Tahmooressi.
Who gives a damn about climate change in Mexico? The fact that we have had Obama, John Kerry, and Jerry Brown all have personal contact with this fella and none of them discussed — excuse me — demanded the release of SGT Tahmooressi is unconscionable. As a matter of fact, to me it represents the most heinous dereliction of duty by these charlatans. And to give Nieto a doggone platform to praise California for its disrespect of the rule of law borders on treasonous actions by Governor Brown… well, I am at a loss for words.
Why would anyone with half a brain want to live in California? We reported here on the insidious policy of cutting off water to farmers to protect a fish while diverting water for San Francisco and the Bay Area. California is bleeding businesses seeking to escape its onerous tax policies — sound familiar? — and California is even considering an “exit tax.” Look at how taxpayer funds are being used: to provide more services for illegal immigrants — who cares about Americans. And all this while the state has at least three bankrupt cities.
And Brown wants to talk to Nieto about climate change?
CNS reports, “Pena Nieto said such actions signaled that California was recognizing human dignity no matter a person’s immigration status. “The progress you have promoted not only benefits Californians because you have sent a very clear message to the U.S. and the entire world,” he said during an address in Spanish to a joint session of the Legislature.”
Welcome to the Obamaworld of American disrespect — here we have this Mexican leader lecturing our country about human dignity while his country is illegally holding — and has beaten — an American Marine. Folks, you cannot make this stuff up, and any of your progressive socialists who stand by Brown, and worse, Nieto, have my complete disdain.
CNS reports that “about 150 protesters waved American flags and shouted slogans across the street, calling for the release of a U.S. Marine who has been detained since he crossed the border in April with weapons and ammunition in his vehicle. Pena Nieto did not comment about the detention of Marine Sgt. Andrew Tahmooressi, but his staff was handed a letter signed by 19 Republican state lawmakers asking for the Marine’s release.”
Quite telling — the letter delivered didn’t have a single California Democrat state lawmaker’s signature — quite telling indeed about how Democrats feel not only about SGT Tahmooressi but our military as a whole. Y’all make it real easy to despise you!
_____________________________________________________________________

Obama as “Emancipator” of Illegal Immigrants:

SEE: http://www.thenewamerican.com/usnews/immigration/item/19016-legal-theory-emerges-for-obama-rewrite-of-immigration-law;
EXCERPT:
The argument will be that Congress has not only refused to fix "broken immigration laws," it has also failed to appropriate enough money to fully enforce existing laws against an estimated 11.5 million illegal immigrants, thereby leaving the executive branch with wide latitude in deciding on how and against whom to enforce those laws, the AP reported.