New Gun Bill Would End Private Sale Of Guns
Published on May 21, 2015
Rep. Carolyn Maloney (D-N.Y.) introduced a bill that would effectively create a firearms registry by forcing private sellers at gun shows to report sales to the Attorney General and by requiring gun show organizers to register with the Justice Dept.
http://www.infowars.com/house-democra...

Posted by John at 2:54 PM Links to this post

MARTIAL LAW PREPARATIONS EXPOSED
Published on May 15, 2015
On this Thursday, May 14th edition of the Infowars Nightly News Darrin McBreen covers some truly shocking footage of United States Marines preparing to detain and restrain people in camps, then just who is coming across our border and Osama Bin Laden, the bigfoot of terrorists, what really happened and finally Darrin welcomes a very special guest for a final word on Obama's plan to turn over control of the Internet to the federal government.

The Ohio National Guard is alerting soldiers to report to duty in preparation for potential riots following the trial of Cleveland, Ohio, police officer Michael Brelo, according to an insider.
And an Ohio native shot a video of a train transporting military vehicles heading toward Cleveland.

Cleveland Primed to be next Ferguson; Video Works Even Though Image is Blocked:

Posted by John at 2:44 PM Links to this post

The Vatican Will Officially Recognize Palestine as a State
http://www.truthdig.com/eartothegroun...

VATICAN RECOGNIZES PALESTINIAN STATE
(Friday Church News Notes, May 22, 2015, www.wayoflife.org, fbns@wayoflife.org, 866-295-4143) - In a new treaty finalized on May 13, the Vatican has officially recognized “the state of Palestine.” Vatican spokesman Federico Lombardi said, “Yes, it’s a recognition that the state exists” (“Vatican recognizes state of Palestine,” The Times of Israel, May 13, 2014). In a papal audience on May 16, Pope Francis called Palestinian President Mahmoud Abbas “an angel of peace.” Three years ago, the Vatican had “welcomed the decision by the UN General Assembly to recognize a Palestinian state.” The Roman Catholic Church has long been opposed to Israel. Jews were slaughtered during the Catholic crusades and placed in ghettos in Catholic-controlled cities. The heresy of Replacement Theology, which replaces Israel with the Church, was fathered by Rome and borrowed from her by Protestants. In 1922, Cardinal Gasparri, Vatican Secretary of State, voiced concern that the British Mandate on Palestine might “give Israel a privileged position and might compromise the rights of the Catholic Church regarding the protection of the Holy Places” (“The Holy See and the Postwar Palestine Issue,” International Affairs, Spring 1984). In 1950, the Jewish Telegraphic Agency reported that the Vatican was “intensifying its campaign for the internationalization of Jerusalem” (JTA, Nov. 21, 1950). That campaign did not cease until the 1980s when the Vatican began to support the PLO and its goal of making East Jerusalem its capital. In 1982, Yasser Arafat was received at the Vatican “with all the honor and dignity accorded a head of state.” With the 2015 treaty, the Vatican’s support shifts from the PLO to the Palestinian State. The Vatican is comfortable making treaties with Muslim terrorist organizations that hate Israel, vow her destruction, and persecute professing Christians because she is one of the devil’s chief instruments in human affairs. One day, Mystery Babylon will yoke together with the very Antichrist himself, according to Revelation 17, and Rome doubtless is at the heart of this end-time phenomenon. “And in that day will I make Jerusalem a burdensome stone for all people: all that burden themselves with it shall be cut in pieces, though all the people of the earth be gathered together against it” (Zec. 12:3).

Posted by John at 1:59 PM Links to this post

NSA SPYING: 3 JUDGE PANEL FINDS
METADATA PROGRAM ILLEGAL
Published on May 15, 2015
On May 7, In the lawsuit ACLU Vs. James Clapper, The Director Of National Intelligence, a three-judge panel for the Second Circuit held that "the telephone metadata program exceeds the scope of what Congress has authorized and therefore violates Section 215 of the Patriot Act. The ruling sends the case back to the District Court for further proceedings.

Section 215 of the Conspicuously Subversive Patriot Act expires in June. Section 215 of the Patriot Act is commonly referred to as the Library Records Provision. 215 Allows the Foreign Intelligence Surveillance Act as applied by the Director Of The FBI or an official designated by the director access to “tangible things” deemed under investigation. This investigation must be conducted in accordance under the guidelines laid out in Executive Order 12333 and must not be carried out on Citizens whose activities are protected by the First Amendment. All orders must be granted by a FISA court judge. These orders carry gag orders, as to not expose the investigation.

This broken promise by our Federal Government was exposed by numerous whistleblowers and undermined by the Intelligence community on a massive scale. Now, The lights have been turned on, and the roaches are scurrying to keep control of the kitchen.

Meanwhile, The Mouthpieces Of The American Counter Terror Movement ratcheted up by the Military Industrial Complex project the psyop needed for the unconstitutional legislation.

Expect to see more blatant extortion thrown at the feet of the American People, threats like these will increase as the scrutiny of unconstitutional surveillance grows. 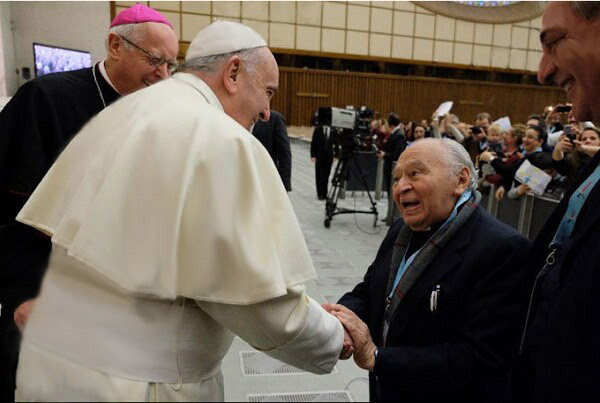 (Friday Church News Notes, May 15, 2015, www.wayoflife.org,fbns@wayoflife.org, 866-295-4143) - Gustavo Gutierrez, founder of Liberation Theology, was welcomed this week at the Vatican by Pope Francis. This is the second visit of Gutierrez to Rome during Francis’ papacy, and it marks the mainstreaming of the Catholic version of the social gospel. Liberation Theology seeks to analyze and solve the underlying cause of poverty rather than preach the gospel to the poor. It is a Marxist approach to the solving of societal ills. It is shortsighted, focusing on this present life rather than eternity. It blames poverty on capitalism. It focuses more on America as the cause of global social injustice than on Communism and petty dictatorships, even though America has lifted more people out of poverty than any communist government. “The literature of liberation theology consisted of the usual Marxist cant sprinkled with holy water, with unoriginal references to class struggle, oppression, imperialism, dependence, and especially how Latin America poverty was all the fault of capitalism emanating from the United States and western Europe” (Steven Hayward, “How Is Liberation Theology Still a Thing?” Forbes, May 10, 2015). The social gospel has become one of the major uniting factors of a one-world “church.” Even “evangelical” missionaries today tend to focus more on healing “social injustices” than preaching the gospel and building biblical churches, but there is no liberation theology or social gospel evident in the book of Acts.
______________________________________________________

BY SELWYN DUKE
SEE: http://www.thenewamerican.com/usnews/item/20876-obama-plays-class-warfare-card-calls-wealthy-society-s-lottery-winners; republished below in full unedited for informational, educational, and research purposes:

OBAMA: CHURCHES SHOULD FOCUS MORE ON POVERTY INSTEAD OF ABORTION AND GAY MARRIAGE

SEE: http://the-trumpet-online.com/obama-churches-focus-poverty-instead-abortion-gay-marriage/; republished below in full unedited for informational, educational, and research purposes:

President Obama suggested that people of faith should focus more on helping the poor, instead of focusing on divisive issues such as gay marriage and abortion.
During a panel discussion on poverty at Georgetown University, Obama specifically referred to his own Christian faith, pointing out that he recognized the importance speaking out about the issue as president.
“I think it would be powerful for our faith-based organizations to speak out on this in a more forceful fashion,” he said, admitting that his wish might sound “self-interested” because he had disagreements with Christian and Catholic organizations about gay marriage and abortion.
“There is great caring and great concern, but when it comes to what are you really going to the mat for, what’s the defining issue … this is often times viewed as a ‘nice to have’ relative to an issue like abortion,” Obama said.
He argued that churches should spend more time pursuing “powerful” ideas such as helping those in poverty in order to attract more followers.
“Nobody has shown that better than Pope Francis, who I think has been transformative just through the sincerity and insistence that this is vital to who we are, this is vital to following what Jesus Christ our Savior talked about.”
Obama added that he hoped that the American people received that message when Pope Francis visits the United States in September.
“I can’t wait to host him because I think it will help to spark an even broader conversation of the sort we are having today,” Obama concluded.
____________________________________________________________

Posted by John at 8:54 AM Links to this post