Recently we documented the evidence for
the Grahams' apostasy at:
http://ratherexposethem.blogspot.com/2013/03/billy-franklin-graham-popular-but.html.
This old video proves Billy Graham's universalism in an interview with Robert Schuller. It clearly exemplifies Graham's public apostasy which spans decades. Nevertheless, Ingram sees no problem holding hands in joint ministry endeavors with Billy and Franklin Graham.

Now we will show that the "winsome" Chip Ingram of the "Silicon Valley", California, has maintained associations with compromised Christians, such as the Grahams, (e.g. at the Cove, http://www.thecove.org/), despite their Catholic connections, universalism, "wider mercy salvation", treating Mormonism as mainstream Christianity, awards to "word of faith" heretics, youth rock concerts, and ecumenism. Add to that Ingram's drinking deeply of the cesspool of the world of pagan psychology focusing on NDE, or "near death experiences" as proof (among 6 extra-biblical, unbiblical proofs) of the existence of an afterlife besides the Bible. Add again, his unbiblical, mythical, faulty and heretical demonology which populates this world and the next. Add again the association with Rick Warren, Bill Hybels, John Ortberg and other emerging heretics.
Perhaps Ingram, in his rush to be "all things to all people" got sidetracked and his ego inflated by the "performance metrics" (rising income, to name one) of his ministries' successes in the last few years, which has mistakenly convinced him that he must be doing something right with his sycophant undiscerning followers/donors. The business metrics may look encouraging, but what about the metrics of "real evidences of salvations/sanctifications/spiritual growth"? Ingram claims that pastors and church leaders can't seem to define these, allegedly providing such definition, but he never offers a biblical definition, other than marketing his use of worldly business models and systems to fill a "need" that he's convinced you of by nothing more than slick salesmanship.
We previously commented on the integration of secular, worldly business practices into churches at:
http://ratherexposethem.blogspot.com/2013/05/global-leadership-summit-2013.html, in which we said:

"It needs to be said that churches should not be run like businesses. When churches are run like corporations, pastors, elders and deacons lose whatever humility they once had and become manipulative dictatorial leaders and/or task masters, and discard their roles as shepherds, ministers, caring advisers, and equal members of the body of Christ, under the authority of God. Frequently, and in their sinful arrogance and independent spirit, the result is a complete failure to teach from the Bible, disciple believers, and warn and/or correct the congregation in a loving way about apostates, heretics, false teachers, false prophets, and the twisting of Scripture. Instead, they themselves become the focus of worship, the primary and final arbiters of truth, doctrine, and practice on their own authority. Members are ridiculed for wanting to hear Bible based expository preaching on the pretense that it just makes people fat and lazy, unwilling to work for the common good of the church. Adopting a business-like structure in church creates a hierarchy of authority, a "chain of command", leads to abuse, contributes to gnosticism, fosters elitism, belittles the congregation as a working class, values performance over grace, diverts from the God-given guidance of Scripture and focuses on implementing the vision cast by leaders, requires the congregation to subject themselves to unbiblical self-appointed change agents, drives the congregation away from the true gospel of grace towards a social gospel of works, creates a socialist, collectivist, community organizational structure that denies or suppresses individualism, individual thought, and individual effort. Compliance and compliant church members fit into this unbiblical business community, and consequently, individualistic personalities are routinely discarded and booted out if they "don't get with the program".
Let's begin and lay out the evidence, which, by the way, is very much hidden deep in a mountain of glowing, positive accolades from many sources and carefully crafted public persona imagery, couched in an aura of professionalism. This is all man-centeredness to the maximum, with a baptism in self-centeredness for his followers.
What we are dealing with here is much more sinister than simply a common integrationist methodology of mixing the Word of God with psychology producing psychoheresy. No, Ingram is careful to frequently give a disclaimer that what he offers is not just psychology alone. No, he claims his solutions are biblical and often quotes from the Bible. Nevertheless, the habits, addictions, symptoms, conditions and dysfunctional behaviorisms that he addresses are described as such, in psychological terms, never as sins and/or sinful, where the patient/counselee is the victim of past hurts and wounds. The latter approach of being personally responsible for sins would alienate much of his audience who would have to take the blame themselves for their state of mind and soul.
What Ingram offers is just another age-old form of gnosticism, with man's wisdom pre-eminent, for a price. It's what you don't get in this package tied so neatly with a fancy ribbon, namely the Holy Spirit's role and work in the believer!
Chip Ingram is the president of Walk Thru the Bible, having replaced its founder Bruce Wilkinson, the latter being the author of the heretical/mystical book, "The Prayer of Jabez". Ingram is the author of "The Invisible War", a book about demons, reviewed by Gary Gilley here: http://www.svchapel.org/resources/book-reviews/4-christian-living/178-the-invisible-war-by-chip-ingram.
Ingram was the senior pastor of Santa Cruz Bible Church, http://santacruzbible.org/, a large non-denominational church located in Santa Cruz, California, where he and Dan Kimball served on staff together for over twelve years (see page 265 of Dan Kimball's book, "The Emerging Church"). Kimball is at Vintage Faith Church now:
http://www.vintagechurch.org/about/leadership/dank, also in Santa Cruz, and has a blog http://dankimball.com/.
See also the following Apprising posts on Kimball, who associated with Ingram for twelve years in ministry:
http://apprising.org/2010/11/20/dan-kimball-on-the-record/.
http://apprising.org/2010/11/12/apprising-ministries-on-dan-kimball/.
http://apprising.org/2010/11/19/emerging-church-leader-dan-kimball-on-discernment-ministries/.
http://apprising.org/2011/12/07/dan-kimball-of-the-emerging-church-to-speak-for-rick-warren/.
http://apprising.org/2010/11/20/dan-kimball-on-the-record/.
http://apprising.org/2011/01/01/dan-kimball-of-the-emerging-church-and-lectio-divina/.
http://apprising.org/2008/08/25/is-emergent-church-pastor-dan-kimball-really-a-conservative-evangelical/.
http://apprising.org/2010/02/19/curious-associations-ed-stetzer-dan-kimball-and-tim-keller-missionshift/.
http://apprising.org/2008/07/15/dan-kimball-an-effete-christianity-is-nothing-to-be-gay-about/.
http://apprising.org/2007/04/14/dan-kimball-and-the-emergent-church-seeking-hard-to-make-homosexual-sin-not-sin/.
http://apprising.org/2007/08/09/emergent-church-does-dan-kimball-preach-a-perverted-gospel/.
http://apprising.org/2008/01/11/dan-kimball-reformed/.
http://apprising.org/2007/08/06/dan-kimball-they-like-jesus-but-not-the-church/.
Lighthouse Trails has articles about Kimball's promotion of contemplative mystical practices:
http://www.lighthousetrailsresearch.com/dankimball.htm.
http://www.lighthousetrailsresearch.com/stevemuseemerging.pdf. (Review of Kimball's book by Steve Muse).
http://www.hadleyrobinson.com/Doc/Leaders/DanKimball/DanKimball.htm.
Ingram is one of six contributors to Kimball's book, including Howard Hendricks (Center for Christian Leadership), Brian McLaren (founding pastor of Cedar Ridge Community Church, and emergent heretic), Sally Morgenthaler (president of Sacramentis.com), Mark Oestreicher (president and publisher of Youth Specialties, www.youthspecialties.com), and Rick Warren (senior pastor and Purpose Driven Pope of Saddleback Church www.saddleback.com).
Ingram comments on page 223 of Kimball's book cited above: "Dan's thoughts on discipleship are not limited in their application to the emerging church. The (ancient) disciplines are needed everywhere and can form a rich arena for followers of Jesus from all generations." This is a direct comment on Kimball's chapter 19, "Spiritual Formation: Becoming a Vintage Christian", sub-paragraph titled "Restoring the ancient disciplines (Catholic contemplative mystical practices) to create vintage Christians".
Ingram is currently senior pastor at Venture Christian Church http://www.venturechristian.org/about/pastors/, with links of course to his other websites, among which is "Living on the Edge" http://livingontheedge.org/, which introduces the follower to a law based methodology mixed with psychology, as in http://livingontheedge.org/series/gods-boundaries-for-abundant-living/daily-radio. Ingram's "core values" are the "R12 and BIO" programs:
http://livingontheedge.org/about-us/core-values, indoctrinations into legalism, works and a type of "purpose driven" service similar to Rick Warren's "Purpose Driven Life", where the gullible are led to believe that bible study, learning and wisdom should take a back seat to "kingdom building". "BIO" is a step further into a regimen of "spiritual disciplines" (also known as "spiritual formation"); for example this excerpt:

"BIO is a simple framework of spiritual disciplines that, when practiced regularly, builds healthy, sustainable spiritual growth for life. A BIO believer is committed to living out their faith daily before God, in community and on mission."
Contrast this with what the Bible has to say about justification and sanctification. There is nothing that can be added to, or should be added to, the completed work of Jesus Christ:
Romans 3:20-" Therefore by the deeds of the law no flesh will be justified in His sight, for by the law is the knowledge of sin."
Romans 3:24-"being justified freely by His grace through the redemption that is in Christ Jesus"
Romans 3:28-"Therefore we conclude that a man is justified by faith apart from the deeds of the law."
Romans 4:2-"For if Abraham was justified by works, he has something to boast about, but not before God."
1 Corinthians 6:11-"But you were washed, but you were sanctified, but you were justified in the name of the Lord Jesus and by the Spirit of our God"

Dr. Kenneth Ring, NDE "near death experience" psychologist and one of Ingram's sources for proofs of the Afterlife:

Kenneth Ring, psychologist on the left and Michael Sabom, cardiologist on the right, with two other original founders of "International Association of Near Death Studies, http://iands.org: 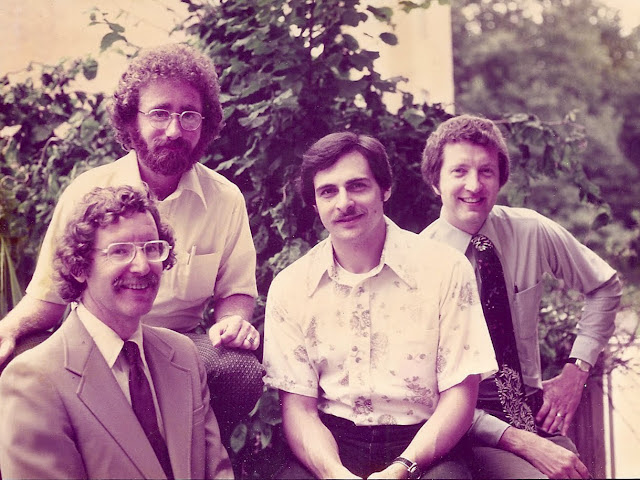