HUNGARY'S ORBAN TO EUROPEAN UNION: "YOU CONDEMN US BECAUSE WE ARE NOT A NATION OF MIGRANTS"

"Hungary will not be a country of migrants" 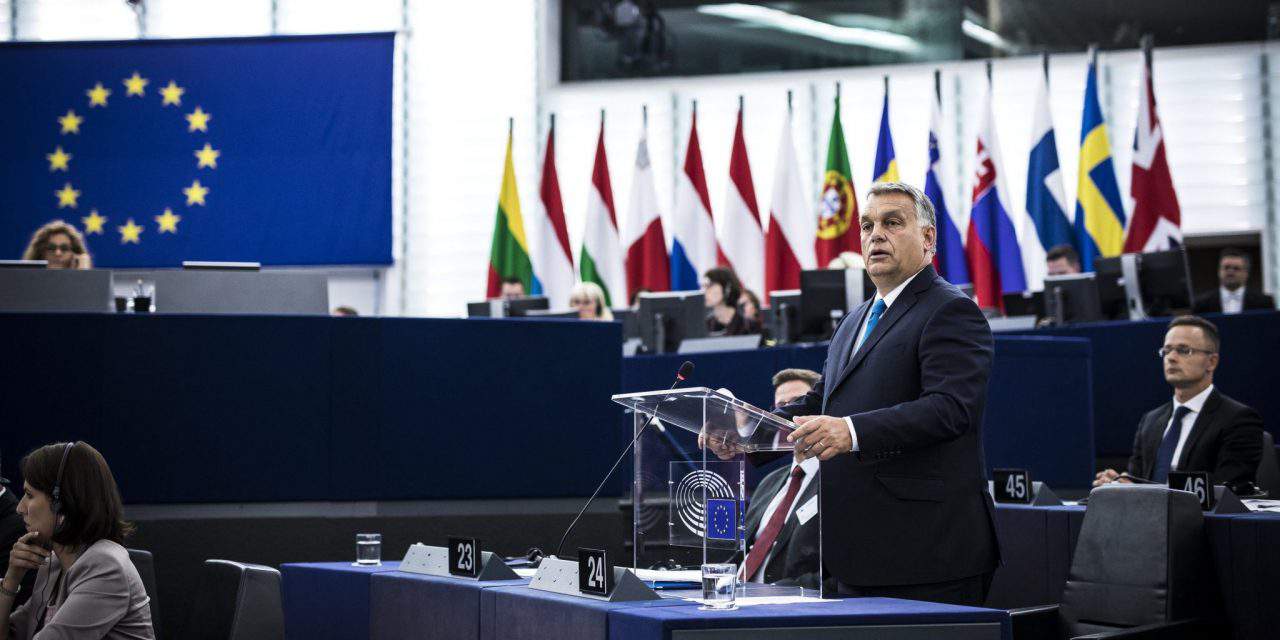 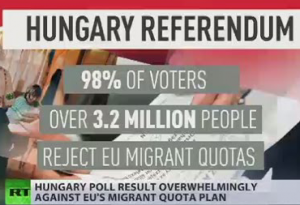 HUNGARY'S ORBAN TO EUROPEAN UNION: "YOU CONDEMN US BECAUSE WE ARE NOT A NATION OF MIGRANTS"
BY CHRISTINE DOUGLASS-WILLIAMS
SEE: https://www.jihadwatch.org/2018/09/hungarys-orban-to-eu-you-condemn-us-because-we-are-not-a-nation-of-migrants; republished below in full unedited for informational, educational and research purposes:
The EU is in the process of deliberations on whether to strip Hungary of “key” EU rights because of that country’s policies on immigration. Hungarian leader Viktor Orban delivered  a “fiery speech to European lawmakers in Strasbourg,” stating that he will not give in to EU “blackmail.”
Orban accused the “pro-migrant majority” of having “already made up their minds” to invoke the European Union Treaty’s Article 7 against Hungary, for its treatment of migrants and minorities
Orban has long argued that he does not see the multitude of Muslim migrants who entered Europe as refugees, but as “economic migrants,” since they deliberately “journey to richer western European countries….while passing through less wealthy countries.” He also stated:
We believe that a large number of Muslims inevitably leads to parallel societies, because Christian and Muslim society will never unite.
The daily headlines are filled with news of no-go zones (many likened to war zones), sharia patrols and crimes, assaults and jihad attacks directly related to the Muslim migrant influx. Orban’s warning about parallel Muslim societies has already come true in the UK, where over 85 Sharia courts are in operation. Orban has remained steady on his views about Muslim migration, unlike Angela Merkel, who has flip-flopped to suit her political agenda at various times. Recently news emerged about another surprising U-turn by EU President Jean-Claude Juncker, who has backed a 10,000-strong border force to crack down on illegal immigration. 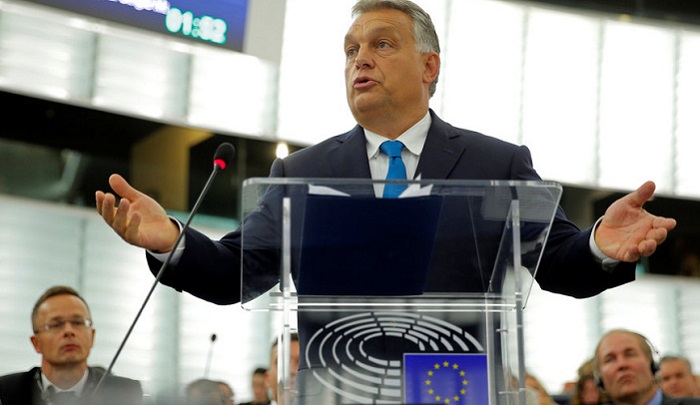 “‘You condemn us because we are not a nation of migrants,’ Orban tells EU before sanctions vote,” RT, September 11, 2018:

Hungarian Prime Minister Viktor Orban delivered a fiery speech to European lawmakers in Strasbourg, before they began deliberations on suspending the country’s key EU rights due to his government’s policies.
Orban accused the “pro-migrant majority” of having “already made up their minds” to invoke the European Union Treaty’s Article 7 against Hungary, for its treatment of migrants and minorities, and the ruling party purported abuse of the law and suppression of media freedoms.
“Hungary will not accede to this blackmailing, Hungary will protect its borders, stop illegal migration and – if needed – we will stand up to you,” said Orban, who was re-elected with an overwhelming majority in April.
“Hungary is going to be condemned because the Hungarian people have decided that this country is not going to be a country of migrants.”
Calling the proceedings an “insult” to his nation, Orban called Hungary the “defender of Europe” and spoke of its “different view on Christianity in Europe, the role of nations and national culture.”
“These differences cannot be a reason to brand any country and be excluded from joint decisions. We would never go as far as to silence those that do not agree with us,” said the Hungarian prime minister, as the majority of the chamber sat in silence, while his mostly Euroskeptic supporters cheered.
Article 7 is applied if an EU member state presents a “systemic threat” to the bloc’s values, which Hungary was adjudged to have done in a report by Green MEP Judith Sargentini earlier this year, and could result in Budapest losing its voting representation in various European bodies, becoming a pariah state in the union.
It requires for two-thirds of MEPs to vote in favor of accepting the report on Wednesday, after European Commission chief Jean-Claude Juncker delivers his annual State of the Union speech.
This is considered likely, but all the other EU nations would then need to agree unanimously to punish Budapest. Such consensus has never been achieved, meaning that Article 7 has never been implemented, and is not likely this time either.
Hungary has vowed to veto the application of similar sanctions to Poland, under its own investigation, and at least Warsaw will likely return the favor…..

BY JAMIE WHITE
SEE: https://www.infowars.com/facebook-suspends-walkaway-founder-for-mentioning-alex-jones/; republished below in full unedited for informational, educational and research purposes:
Facebook has slapped a 30-day suspension on #WalkAway founder Brandon Straka for simply mentioning Alex Jones.
Straka took to Twitter Wednesday to explain he’d been temporarily banned from Facebook ahead of the #WalkAway March on Washington next month, where thousands of disillusioned former Democrats are slated to rally together to show their disgust with the Democrat Party before the midterms.
“FACEBOOK JUST BANNED ME AS I AM PLANNING THE #WalkAway March on Washington!!! I have been banned from posting leading up to the March. This is devastated for our ability to reach people!!! I was banned for mentioning my interview with Alex Jones. Can anybody help???” he tweeted Wednesday.

FACEBOOK JUST BANNED ME AS I AM PLANNING THE #WalkAway March on Washington!!! I have been banned from posting leading up to the March. This is devastated for our ability to reach people!!! I was banned for mentioning my interview with Alex Jones. Can anybody help???


Straka included screenshots of Facebook’s vague explanation of the suspension, which stated, “If you post something that goes against our standards again, your account will be blocked for another 30 days.”
In a statement to Infowars, Straka claimed he was banned for posting, “Hey, Patriots! I’m going live on http://InfoWars.com in 15 minutes.”
Straka’s WalkAway YouTube channel has already amassed nearly 56,000 subscribers since he launched it earlier this summer, which is why the left is determined to shut down the grassroots movement.
Indeed, leftist media like CNN and Huffington Post demonized the WalkAway movement last month, claiming with no proof that it was a “Russian bot” campaign meant to “wound Democrats.”
Twitter:
______________________________________________________________

For Posting on How to Prevent Another 9/11

SEE: https://www.jihadwatch.org/2018/09/facebook-bans-me-on-9-11-for-posting-on-how-to-prevent-another-9-11; republished below in full unedited for informational, educational and research purposes:
[Editor’s note: To best understand why Facebook would ban Frontpage Editor and Glazov Gang Host Jamie Glazov on 9/11 for his article on how to best prevent more 9/11s, pre-order Jamie’s new book, Jihadist Psychopath: How He Is Charming, Seducing, and Devouring Us: HERE. The book illustrates how the Jihadist Psychopath has successfully built his totalitarian plantation — on which many in the West are now enslaved and dutifully following his orders. Jamie outlines the frameworks of this tyrannical plantation and how those who are trapped on it, and yearn for freedom, can best escape.]
Facebook’s Unholy Alliance masters are, without doubt, accelerating their totalitarian suffocation of free thought and expression. it is no surprise, therefore, that I was suspended from Facebook for 30 days yesterday, on September 11, after posting my article, 9 Steps to Successfully Counter Jihad. I believed that the article was more relevant and urgent than ever due to the skyrocketing Jihadist stabbings in Europe — and to the 17th anniversary of 9/11 that was approaching the next day.
But it appears that daring to give suggestions on how our civilization can stop Jihadist attacks and another 9/11 is against Facebook’s ‘community standards’. I posted a screenshot of the reprimand that Facebook sent me and then tweeted about it. (See Below).

The article itself outlined nine ways in which Jihad can best be countered. The steps include:
1. Label the Enemy and Make a Threat Assessment, 3. Stop “Partnering” With Muslim Brotherhood Front Groups, and 5. Launch Our Own Counter-propaganda Campaign.”
My advice also involves the promotion of supporting moderate Muslims — a move that is, clearly, horrifying to Facebook’s masters and therefore also violates their “community standards.”
No doubt, my consistent campaigning on behalf of Muslim women and girls in my efforts to protect them from FGM, Honor Killings and other Sharia barbarities, has gained me the anger and hatred of Facebook’s guardians — who are clearly on the side of the Sharia enforcers and oppressors of Muslim women and girls.
I am no stranger to censorship on social media — especially of the insane variety. In April earlier this year, I was suspended from Facebook for posting screenshots of a Muslim’s threat to me on the platform.
Then, in May, my Twitter account was temporarily suspended and I was forced to delete tweets I posted which directly quoted Islamic religious texts. My account was suspended for violating Twitter’s rules relating to “hateful conduct.”
It is “hateful conduct”, apparently, to reference what Islamic texts themselves say. Indeed, I had simply referred to Sahih Bukhari’s texts discussing Mohammed’s marriage to Aisha when she was six years old (7.62.88) and to Qur’anic Suras that mandate the Hijab for women (24:31; 33:59) and sanction sexual slavery (4:3; 33:50).
I have also attempted to write to Facebook to ask what it is specifically that violates Facebook’s “community standards” when a person gives advice on how to best defend American lives from Jihad. But when I try to send my inquiry, a Facebook announcement appears telling me that my “request” cannot be processed. It appears, therefore, that when you are languishing in the Facebook Gulag, not only are you imprisoned without understanding why, but there is also no way and no one to ask about your fate.
Islamic blasphemy laws are here — and coming to a neighborhood near you.
I humbly request everyone to get involved. Please go to Facebook and click on the blue question (“?”) mark on the top-right corner of your Homepage. Then select “Report a Problem” at the very bottom of the box and go to the “General Feedback” section and write in to request that my ban be lifted. You can also do that on Facebook HERE and HERE. Also protest on Twitter: @facebook and @fbnewsroom — and directly to Mark Zuckerberg: @finkd. And please spread the word and report this outrage to all the media you can.
And make sure to FOLLOW me on Facebook as well as on Twitter to strengthen my social media strength in the face of this censorship: @JamieGlazov.
Thank you so much!
____________________________________________________________
SEE ALSO:
https://www.frontpagemag.com/fpm/271314/facebook-bans-outline-stop-jihadi-attacks-wndcom
Posted by John at 9:12 AM Links to this post