BOAT MIGRANTS IN ITALY DOWN 80%, UP 350% IN SOCIALIST SPAIN
BY CHRISTINE DOUGLASS-WILLIAMS
SEE: https://www.jihadwatch.org/2018/08/boat-migrants-in-italy-down-80-up-350-in-socialist-spain; republished below in full unedited for informational, educational and research purposes:
The number of migrant sea arrivals in populist Italy, so far in 2018, is down 80 percent compared to last year, whilst surging by over 350 percent in the same period in socialist Spain.
In Ceuta, this was the scene described in the Daily Mail as migrants stormed in: They scrambled over ‘all of a sudden, with much violence,’ and some attacked police with quicklime they had in tubes and bottles. As a result, ‘more than a dozen police’ were injured with the substance, four of whom had to go to the hospital for burns to their faces and arms. Some of the migrants scaling the fences threw feces at police officers trying to hold them back
How likely are these migrants likely to “integrate” into Spain?
The Daily Star reported in February that Ceuta is now a slum that “is breeding ground for ISIS terrorists.” Spain’s Foreign Minister, however, has denied that his country is experiencing mass migration. He said: “We need new blood.”
Meanwhile, in nearby Italy, Italian interior minister Matteo Salvini vowed: “I promised to defend the borders and I am doing it with all my energy and all the means at my disposal.” 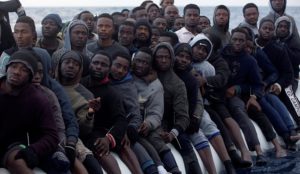 The number of migrant sea arrivals in populist Italy, so far in 2018, is down 80 percent compared to last year, whilst surging by over 350 percent in the same period in socialist Spain.
Over 57,500 illegal migrants and asylum seekers have arrived in Europe by sea so far this year, compared to 112,375 over the same period last year, the UN Migration Agency said in a paper Tuesday.
And as the number of clandestine crossings fell, deaths in the Mediterranean Sea more than halved, falling from 2,240 to 1,111.
The significant fall is likely to be partly thanks to Italy’s new, populist government, which is fighting to end illegal crossings and to protect their borders. There were just 18,392 migrants arriving in Italy so far this year, 80.6 percent less than the same period last year.
However, Spain, which has a new socialist government, has become the new main arrival-by-sea country in the Mediterranean. More than 22,800 migrants have arrived there since the beginning of the year, with 1,866 since the 25th of July alone…..

US SLAPS SANCTIONS ON TWO TURKISH LEADERS OVER PASTOR BRUNSON'S DETENTION~ERDOGAN REMAINS DEFIANT
BY ROBERT SPENCER
SEE: https://www.jihadwatch.org/2018/08/us-slaps-sanctions-on-two-turkish-leaders-over-pastor-brunsons-detention-erdogan-defiant;
Posted by John at 11:07 AM Links to this post

UK VIDEO: TOMMY ROBINSON ABUSED IN PRISON~"WHAT THEY TRIED TO DO WAS MENTALLY DESTROY ME"~PUT ON STARVATION DIET~MUSLIM PRISONERS SPIT & THREW FECES INTO HIS CELL

UK VIDEO: TOMMY ROBINSON ABUSED IN PRISON~"WHAT THEY TRIED TO DO WAS MENTALLY DESTROY ME"
BY ROBERT SPENCER
SEE: https://www.jihadwatch.org/2018/08/uk-video-tommy-robinson-abused-in-prison-what-they-tried-to-do-was-mentally-destroy-me;
Posted by John at 10:52 AM Links to this post