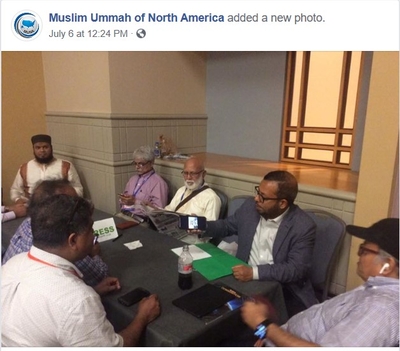 NY IMAM ACTIVE IN INTERFAITH WORK DISSEMINATES EXTREMIST PROPAGANDA ON THE SIDE
BY Abha Shankar
SEE: https://www.investigativeproject.org/8031/ny-imam-active-in-interfaith-work-disseminates;
Posted by John at 2:12 PM Links to this post

Friday Church News Notes
Republished below in full unedited for informational, educational and research purposes:
CHINA’S THOUGHT TRANSFORMATION CAMPS (Friday Church News Notes, August 9, 2019, www.wayoflife.org, fbns@wayoflife.org, 866-295-4143) - The following is excerpted from “BBC Report Shows Disturbing Nature,” The Stream, July 1, 2019: “Adorned with bright smiles and clothed in colorful garb, Uighur Muslims held in political reeducation camps flash across the screen as they sing and dance triumphantly to the words that President Xi Jinping wrote just for them. These sights, captured by the BBC, are what the Chinese government wants journalists and the outside world to see. No amount of colorful displays of political allegiance, however, can hide the reality: Not one of these people is in a political reeducation facility of their own accord. One interchange in the video is especially telling. The BBC reporter asks one of the men whether it was his choice to be in a political reeducation facility. ‘Yes,’ he replies. ‘A policeman at my village told me to get enrolled in the school and transform my thoughts.’ The reporter also speaks to Chinese officials. Nearly every one alludes to the notion that the roughly 800,000 to 1 million people interned in Xinjiang are affected by religious extremism and in need of reeducation so that their thinking aligns with the Chinese Communist Party. The conflation of religion with extremism took shape in new regulations instituted in February of last year. These regulations continue the government’s practice of ‘Sinicizing’--or secularizing--religion, so that it conforms to the core tenets of the Communist Party. In addition to ‘thought transformation,’ people in these facilities must undergo Mandarin lessons, self-criticism sessions, forced labor, and even torture. Occasionally, there are deaths. ... The BBC reporter notes up front that the facilities they were permitted to visit were cleaned up for journalists’ prying eyes. Satellite images showed that prior to the BBC’s visit, watchtowers and barbed wire were removed from the premises and barren outdoor spaces were transformed into sports facilities. Documentaries like this one are incredibly important to building a human rights case against the Chinese government. They provide additional evidence, especially of what the Chinese government wants the outside world to see. Such evidence augments the troves of satellite imagery collected over the last several years and eye-witness testimony of former prisoners, who can testify that these facilities are far from benign. The existence of these facilities and the hundreds of thousands, if not millions, of people arbitrarily detained within their walls is now irrefutable.”LIFESITENEWS BANNED FROM APPLE NEWS (Friday Church News Notes, August 9, 2019, www.wayoflife.org fbns@wayoflife.org, 866-295-4143) - The following is excerpted from “Apple News Bans LifeSite,” Lifesitenews.com, July 31, 2019: “A little over one week ago, Apple approved LifeSiteNews’ application to publish our news on their Apple News platform. Today, without warning, Apple News abruptly reversed course, telling LifeSite that they had deleted our channel and all of our content from their platform. Apple claimed that LifeSite’s channel ‘didn’t comply with our Apple News guidelines.’ Specifically, they stated that LifeSite’s ‘[c]hannel content shows intolerance towards a specific group.’ ... ‘We don’t yet know the reason for Apple’s decision to delete our channel,’ said LifeSiteNews Editor-in-Chief John-Henry Westen. ‘However, at a time when there is growing evidence that tech juggernauts are engaging in concerted censorship against even mainstream conservative viewpoints, Apple’s decision--made unilaterally, and without opportunity to appeal--is frightening. It goes without saying that LifeSite would never promote intolerance or hatred against any group. However, in our current divisive political climate, even mild expressions of common conservative viewpoints are often written off as de facto hatred and intolerance. We certainly hope that this is not what Apple is doing. However, we urge our readers to contact Apple and to respectfully demand that they reinstate LifeSite’s channel.’”
Posted by John at 1:24 PM Links to this post NEARLY 800 ACCUSE BOY SCOUTS
OF FAILING TO PROTECT THEM
FROM SEX ABUSE
AS NEW LAWSUIT IS FILED
SEE: https://christiannews.net/2019/08/09/nearly-800-accuse-boy-scouts-of-failing-to-protect-them-from-sex-abuse-as-new-lawsuit-is-filed/;
Posted by John at 12:52 PM Links to this post

BALTIMORE: AN INSIDE LOOK AT WHAT RESIDENTS CALL “MURDERLAND” BALTIMORE: AN INSIDE LOOK AT WHAT RESIDENTS CALL “MURDERLAND”

Democrats criticize President Trump as racist for exposing the truth

BY KELEN MCBREEN
SEE: https://www.infowars.com/baltimore-an-inside-look-at-what-residents-call-murderland/;
Posted by John at 12:47 PM Links to this post

BY BEN WARREN
SEE: https://www.infowars.com/instagram-trusted-partner-caught-harvesting-millions-of-user-data/;
Posted by John at 12:42 PM Links to this post