Media Matters Sabotages Pro-Trump Media
Published on Feb 13, 2017
In a briefing book that David Brock, the father of “Fake News,” never intended to make public, the strategy Media Matters designed to keep conservative and libertarian websites, including Infowars.com, from getting press credentials in Washington, D.C. is exposed.

The briefing book entitled “Media Matters, The Top Watchdog Against Fake News and Propaganda: Transforming the Media Landscape”, gave Brock a platform to brag about his ability to keep from getting press credentials any news media organization “accountable for even the slightest normalization of Trump.”

SEE OUR PREVIOUS POST:
http://ratherexposethem.blogspot.com/2017/02/leaked-docs-david-brock-of-fake-news.html
MEDIA CAUGHT CENSORING TRUMP ALLY
ROGER STONE
Documented, organized institutional censorship threatens us all
BY JEROME R. CORSI
SEE: http://www.infowars.com/media-caught-censoring-trump-ally-roger-stone/;
WASHINGTON, D.C. – Do you wonder why Roger Stone, the author of several bestselling books, including the current Making of the President 2016: How Donald Trump Orchestrated a Revolution, has been blocked from TV appearances, even at Fox News?
The reason could well be that David Brock, the father of “Fake News,” targeted Roger Stone to block his media appearances in a censorship campaign organized and executed by his mother-ship company Media Matters and its paid troll minions.
In a briefing book that Brock, the father of “Fake News,” never intended to make public, Brock explains how he used Media Matters to implement in conjunction with co-conspiracy with Google and Facebook a strategy designed to keep conservative and libertarian websites, including Infowars.com, from getting press credentials in Washington, D.C.
In a special section of the briefing book highlighted with a blue background, white type and a yellow type bold headline, Brock explains how he “pushed Roger Stone’s bigotry” off cable news.
“Media Matters succeeded in pressuring CNN, MSNBC, and even Fox News to stop booking Roger Stone, a regular guest and longtime Trump ally,” Brock wrote. “Stone has a decades-long history of employing political dirty tricks and regularly spouting violent, racist, and sexist rhetoric, and used his various platforms during the 2016 campaign to advance fringe conspiracy theories and promote fake news.”
Brock’s attack on Roger Stone continued.

“In late 2015 and early 2016, we aggressively educated network producers (who had been providing Stone an uncritical platform) about Stone’s background,” Brock added. “In response to our pressure, CNN and MSNBC confirmed that Stone will no longer appear on their airwaves because of his bigotry, and Stone himself reported that he had been blacklisted by Fox News.”
The briefing book entitled “Media Matters, The Top Watchdog Against Fake News and Propaganda: Transforming the Media Landscape” (published by Brock confidentially for potential donors but obtained and published by the Free Beacon), gave Brock a platform to brag about his ability to keep from getting press credentials any news media organization “accountable for even the slightest normalization of Trump.”
“When Breitbart applied for Permanent Senate Gallery Press Credentials, Media Matters was quick to act by advising the credentialing committee of the myriad ways that Breitbart violated their requirements,” Brock boasts. “Additionally, Media Matters did something that the committee was unable to do: A deep dive study of Breitbart content, reviewing thousands of their stories to demonstrate that they do not meet the credentialing requirement for original reporting.”
Throughout the document, Brock repeatedly explains the role he expects co-conspirators Google and Facebook to play when he targets conservative and/or libertarian media analysts and news organization he opposes ideologically, imploring Google and Facebook to silence “toxic alt-right” social support for reporting generated by a media group Brock has targeted for extinction, like Breitbart as noted above.
Brock’s hatred of Breitbart’s former chief executive is apparent when Brock writes in the confidential briefing book that Breitbart “has received millions in funding from extremist billionaires close to the Trump administration” providing “a nexus point for the so-called alt-right (the newest branding for American white nationalism, anti-Semitism, and misogyny)” to develop, print and/or broadcast stories Brock finds ideologically repugnant.
“With a powerful ally in thee White House (former chief executive Steve Bannon will be Trump’s chief strategist), Breitbart plans to export its brand of anti-establishment racism on a grand scale,” Brock continues.
In another special section of the briefing book blocked off with a blue background and white type, Brock crows about stopping Donald Trump during the campaign from phoning in interviews to news organizations.
“Media Matters was the first to call out national cable broadcast networks for allowing Trump to phone in their shows instead of forcing him to appear via satellite or in studio,” Brock bragged. “Because of this unprecedented privilege, Trump could appear on more shows (he conducted 69 phone interviews in the first 69 days of 2016 alone), and he could avoid being confronted by images and interviewers showing his lies for what they are.”
Brock insists the intervention of Media Matters was responsible for Trump losing this privilege with mainstream media entities he named.
“As a result of our campaign urging major networks to correct course, CBS News and NBC news publicly stated they’d discontinue Trump’s phone privileges,” he explained. “Eventually others followed suit and Trump’s ability to control the news cycle from the comfort of his home was greatly reduced.”
After bragging about stifling Trump’s ability to give telephone interviews to television news groups like CBS and NBC news, Brock marked the section “Private & Confidential.”
Brock makes clear in the briefing book that Media Matters techniques include bullying news organizations into black-balling conservative and libertarian talk-show hosts Brock opposes ideologically.
In introducing Angelo Carusone, the president of Media Matters, Brock boasts that in 2009, Carusone as a law student founded the “Stop Beck” movement that “organized participants via social media to successfully convince sponsors to cease advertising on [Glenn] Beck’s show.”
Brock ends his briefing book with a boldly stated threat.
“Toxic alt-right social media-fueled harassment campaigns that silence dissent and poison our national discourse will be punished and halted,” he proclaimed. “Hundreds of activists will join our campaigns to push back on alt-right harassment.”
“Key alt-right figures will lose credibility and influence in response to our research and pressure.”

Posted by John at 5:51 PM Links to this post

While on FAKE NEWS @CNN, Bernie Sanders was cut off for using the term fake news to describe the network. They said technical difficulties!
— Donald J. Trump (@realDonaldTrump) February 12, 2017

Original story continues below…
***
Former Democrat presidential candidate Bernie Sanders was cut off Friday night during an interview with CNN’s Erin Burnett immediately after he jokingly called the network “fake news.”
The awkward moment happened Friday when Burnett played a clip of President Donald Trump denying knowledge of National Security Advisor Michael Flynn’s alleged talks with a Russian ambassador.
“Well I don’t know. Maybe he [Trump] was watching CNN fake news,” Bernie jests attempting to mock Trump, before asking, “What do you think?”
“It was a joke!” the senator explains to a somewhat bewildered Burnett, but it was too late – the senator was cut off and he stopped receiving audio to his earpiece.


“Erin? Are we on?” Bernie asks.
“It looks like we’ve lost… connection with Senator Sanders,” Burnett attempts to recover.
The interview continued on the other side of a commercial break, but the flub was deleted from CNN’s “entire interview” upload.
In the past few weeks, the network has strongly objected to the term “fake news.”
Just the other day CNN anchor Chris Cuomo equated the term, invented by the left, to a racial denigration on par with the N-word.

But it seems President Donald Trump’s continual mocking of the “fake news” outlet has worn them down to the point they can’t take a joke.
To me, that makes it ten times funnier.
Watch: The Truth about Fake News
Posted by John at 12:01 PM Links to this post 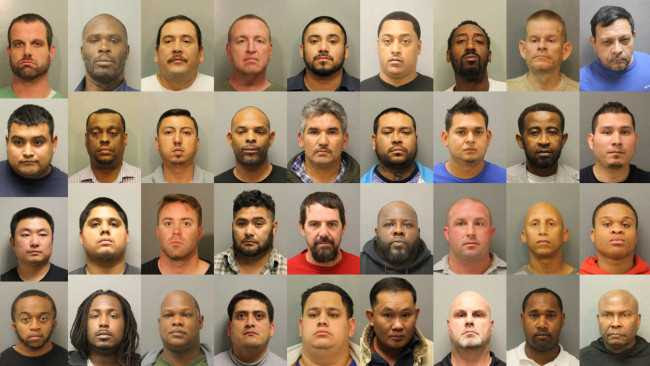 522 "JOHNS", 30 PIMPS ARRESTED
IN SUPER BOWL SEX TRAFFICKING STING
SEE: http://christiannews.net/2017/02/11/522-johns-30-pimps-arrested-in-super-bowl-sex-trafficking-sting/; AND http://nbc4i.com/2017/02/09/522-johns-30-pimps-arrested-in-super-bowl-sex-trafficking-sting/
COOK COUNTY, IL (WCMH) — A national sex trafficking sting ended in the arrests of 552 would-be sex buyers or sex traffickers.
The National Johns Suppression Initiative began three weeks ago, ending on Super Bowl Sunday. 23 law enforcement agencies in 14 states took part in the crackdown.
“Sex trafficking continues to destroy countless lives, and this broad national movement should send a strong message to prospective johns that their ‘hobby’ is much more than a ‘victimless’ crime,” said Cook County, Illinois Sheriff Thomas J. Dart in a news release. “It’s particularly meaningful that this sting culminated on the day of the Super Bowl, which unfortunately has emerged as a prominent haven for sex trafficking.”
In addition to the arrests, police rescued 73 adult victims from human trafficking and 3 juvenile victims.
In the Houston area alone, where this year’s Super Bowl took place, law enforcement arrested 183 “johns” and 9 sex traffickers. Among those arrested was a Houston city employee who pulled up in a city vehicle, two firefighters, a retired police officer and a man who had his 4-year-old child in the car when he tried to buy sex.

1 of 178
“I’m exceedingly proud to lead the nation in targeting sex buyers and traffickers during this annual initiative,” Harris County Sheriff Ed Gonzalez said during a news conference. “Houston was home to Super Bowl LI. As we welcomed the world to our city, we made it clear that there is no place for victimization and sexual exploitation.”
In Seattle, police arrested a john who recently escaped from jail. They also arrested a registered sex offender who tried to convince the undercover detective into working as a prostitute for him.
The participating agencies across the nation have arrested more than 6,500 sex buyers and traffickers since the operations began back in 2011.