"POPE FRANCIS" TELLS BOY THAT HIS ATHEIST FATHER WENT TO HEAVEN, COUNSELS HIM TO "PRAY" TO HIS DAD~OMITS SCRIPTURAL TRUTH

"POPE FRANCIS" TELLS BOY THAT HIS ATHEIST FATHER WENT TO HEAVEN, COUNSELS HIM
TO "PRAY" TO HIS DAD
BY HEATHER CLARK
SEE: https://christiannews.net/2018/04/17/pope-francis-tells-boy-atheist-father-went-to-heaven-counsels-him-to-pray-to-his-dad/; republished below in full unedited for informational, educational, and research purposes:
ROME — Jorge Bergoglio, also known as “Pope Francis,” claimed to a young boy on Sunday that his atheist father is in Heaven because he was a “good man” and God will not “abandon His children when they are good.” He also counseled the child to pray to his deceased dad.
Bergoglio was participating in a question and answer session at St. Paul of the Cross in Rome when a young boy named Emanuele approached the microphone. The boy, who began to cry, was asked by Bergoglio to come onto the platform and speak the question in his ear.
After consoling the child, Bergoglio told the audience what the boy had said.
“My father died a short time ago. He was an atheist, but he had his four children baptized. He was a good man. Is Dad in Heaven?'” Emanuele asked, as relayed by Bergoglio.
“It’s nice that a son says that about his father, that he was good,” Bergoglio remarked. “The one who says who goes to Heaven is God. But what is God’s heart with a dad like that? What? What do you think? A father’s heart. God has a dad’s heart.”
He suggested that God was pleased with Emanuele’s father for having his sons baptized despite not being a follower of Christ himself.
“And with a dad who was not a believer, but who baptized his children and gave them that bravura, do you think God would be able to leave him far from Himself?” Bergoglio asked, using a pushing away hand motion.
The audience replied no.
“Does God abandon His children?” he pressed further. “Does God abandon His children when they are good?”
Those in attendance again called out no.
“There, Emanuele, that is the answer,” Bergoglio said to the boy. “Surely God was proud of your father because it is easier as a believer to baptize your children than to baptize them when you are not a believer. Surely this pleased God very much.”
He closed by urging Emanuele to “talk to” and “pray to” his father.
Mike Gendron, a former Roman Catholic who now leads the Texas-based Proclaiming the Gospel Ministries, told Christian News Network that Bergoglio could have spoken truth while still being gentle, but instead he provided the boy—and anyone who hears his words—with unbiblical false counsel.
“The pope should never speak for God unless he speaks from God’s inspired, authoritative Word,” Gendron said. “It is good to give comfort to a young boy whose father died after living his life as an atheist. The pope could have told the boy about the thief who lived his life as a sinful unbeliever, but in his last hour he repented and trusted Jesus to bring him into paradise (Luke 23:40-43). He could have comforted the boy by saying, ‘Perhaps your dad trusted Jesus as his savior in his last moments on earth.'”
However, “[t]he boy had better theology than the pope,” he said. “He knew his dad was an unbeliever and deserved to go to Hell.”
Gendron explained that contrary to Bergoglio’s words, Scripture clearly states that not everyone is God’s child.
“The pope said God does not abandon His children, [but] God’s Word tells us everyone is either a child of God or a child of the devil,” he said, pointing to 1 John 3:10, which reads, “By this it is evident who are the children of God, and who are the children of the devil: whoever does not practice righteousness is not of God, nor is the one who does not love his brother.”
Jesus also said in John 8:44, “You are of your father the devil, and your will is to do your father’s desires.”
Gendron additionally expressed concern that Bergoglio urged the boy to pray to his deceased father.
“Perhaps the pope does not know that anyone who consults the dead is detestable to the Lord (Deut. 18:10-12),” he said.
“It is tragic for Catholics to be led down the wide road to destruction by following the heretical teachings of this pope,” Gendron stated. “It is my prayer that Catholics will test everyman’s teaching with the supreme authority of God’s Word (Acts 17:11). That is the only way anyone can be protected from the false teachers that are leading people to Hell. The nature of deception is that people do not know they are deceived unless they are confronted with the truth.”
As previously reported, Christianity teaches that none are inherently good, and that all men are born with a sinful nature, being drawn toward distorted desires, such as to lie, steal, commit adultery, covet, dishonor one’s parents, commit murder, and to rebel against the very God who gave them life. Jesus outlined that lust is adultery of the heart and hatred is murder in one’s heart.
Romans 3 explains, “As it is written, There is none righteous, no, not one. There is none that understandeth, there is none that seeketh after God. They are all gone out of the way, they are together become unprofitable; there is none that doeth good, no, not one. Their throat is an open sepulchre; with their tongues they have used deceit. The poison of asps is under their lips, whose mouth is full of cursing and bitterness, their feet are swift to shed blood, destruction and misery are in their ways, and the way of peace have they not known. There is no fear of God before their eyes.”
As men are utterly incapable of changing themselves, Jesus said in John 3:3 men must be regenerated by the Spirit of God, and must pass from spiritual death into spiritual life. Without Christ’s perfect righteousness, none shall enter Heaven—the Bible teaches—and since all have sinned, none can justify themselves by their own works.
“Except a man be born again, he cannot see the kingdom of God,” Jesus taught.

Posted by John at 1:24 PM Links to this post

CONGRESSMAN GOES OFF ON ZUCKERBERG: "HOW DARE YOU ALLOW OPIOIDS TO BE SOLD ON FACEBOOK!"

NO CENSORSHIP FOR ILLEGAL DRUG SALES?
CONGRESSMAN GOES OFF ON ZUCKERBERG: "HOW DARE YOU ALLOW OPIOIDS TO BE SOLD ON FACEBOOK!"

Posted by John at 1:14 PM Links to this post 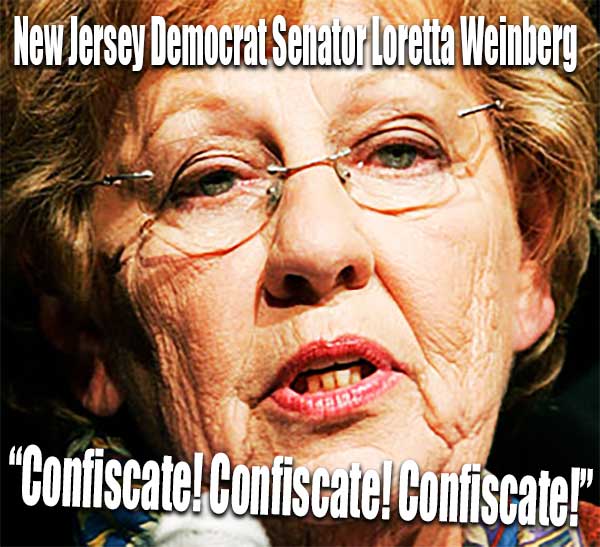 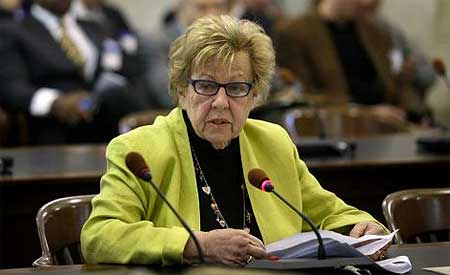 New Jersey – -(Ammoland.com)- Vociferously anti-gun NJ Legislator and rampant egomaniac Loretta Weinberg has exposed just how deeply her willful ignorance and hatred for guns and gun owners goes with a newly proposed bill.
Weinberg has introduced a Bill S2402 that prohibits any and all State-sponsored travel to 37 States that do not currently require firearms purchasers or owners to obtain a permission slip or ID card from the State.
Here’s the relevant language

“a State agency shall not permit a State officer or employee, special State officer or employee, or member of the Legislature to engage in any travel to be paid, in whole or in part, out of State funds, or to be otherwise sponsored by the State, to any state of the United States if that state has not enacted a permit to purchase firearms law. This prohibition shall also apply to any organization that receives aid from the State.”

You read right Loretta Weinberg”s latest bill would prevent state employees or organization funded by the state to travel to other states that respect the right to keep and bear arms.  Dose this mean that NJ Democrat Senator Corry Booker and Bob Menendez would be prevented from Going to Washington?
Weinberg is famously known for her animosity to the Constitution, Bill of Rights and utter contempt for her Oath of Office, once publicly claiming that anything the NJ Legislature decides to enact is defacto Constitutional until a Court says otherwise. And another hot-mic slip where she was caught calling for gun confiscation.
Weinberg believes she has the unilateral authority to arrogantly demand that the overwhelming majority of the Country submit to her will and ideology. It is shocking to see the lengths she is willing to go to take away your freedoms.
This proposal is one step removed from requiring that Citizens receive permission from the State before crossing the border. Something that Weinberg should be intimately familiar with, as it was the standing policy of East Germany for over 60 years.
For many years, New Jersey has been rightly ridiculed as “New Germany” in many quarters, as they seem hellbent on emulating the worst of that countries repressive and deadly communist ideology. Many others dismissed such comparisons as nothing more than over the top hyperbole by a small minority of disgruntled residents, despite overwhelming evidence to the contrary.
On the willful ignorance front, Weinberg is apparently utterly clueless of the fact that multiple Court rulings that have stood for decades prohibit the licensing of a right
Weinberg and her defenders will, of course, exclaim that since NJ’s (or States like MD, HI, and others ) licensing schemes have not yet been struck down, that, of course, means they are Constitutional. Nothing could be further from the truth. The simple fact that these schemes survive to this date means nothing other than the Supreme Court has yet to rule on them. Remember, Washington DC’s ban on handgun possession has enacted in 1976 and wasn't struck down as Un-Constitutional until 2008.

Weinberg needs to be reminded of her place in no uncertain terms. But don't look to the voters of NJ, particularly those in her district that are steadfast supporters of whatever her next freedom crushing idea will be.

That means until a Court puts her in her place, she needs to be exposed and pay the price for her actions. Two can play this game after all. There is nothing preventing Citizens in the 37 States she is targeting from demanding their Legislators send a very strongly worded letter to Ms. Weinberg explaining they will not submit to her outrageous demands and making it clear they will take appropriate reciprocal action against NJ if this bill becomes law.
Weinberg has made it abundantly clear she will never stop on her own, so she must be stopped. And if she cant be voted out of office, then her dictator-like mindset will and should cost the State she represents.
This has worked well in the past. Weinberg is the one responsible for NJ’s draconian “Smart Gun Mandate” which has famously blown up in her face. That model can be modified and used to similar effect with regards to this bill.
About Dan Roberts
Dan Roberts is a grassroots supporter of gun rights that has chosen AmmoLand Shooting Sports News as the perfect outlet for his frank, ‘Jersey Attitude' filled articles on Guns and Gun Owner Rights. As a resident of the oppressive state of New Jersey, he is well placed to be able to discuss the abuses of government against our inalienable rights to keep and bear arms as he writes from deep behind NJ's Anti-Gun iron curtain. Read more from Dan Roberts or email him at DRoberts@ammoland.com

Posted by John at 1:08 PM Links to this post