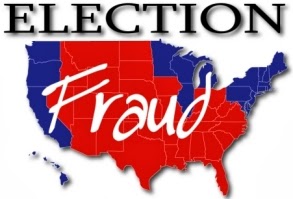 Massive Non-Citizen Voting Uncovered in Maryland:
SEE: http://the-trumpet-online.com/massive-non-citizen-voting-uncovered-maryland/; VIA: PJMEDIA.COM:
Republished below in full unedited for informational, educational, and research purposes:
"An election integrity watchdog group is suing the state of Maryland, alleging that it has discovered massive and ongoing fraudulent voting by non-U.S. citizens in one county. But because of the way that the non-citizens are able to cast votes in elections, the fraud is likely happening in every single county and subdivision across the state. The group believes that the illegal voting has been happening for years.
The group, Virginia Voters Alliance, says that it compared how voters in Frederick County filled out jury duty statements compared with their voting records. The group’s investigation found that thousands of people in Frederick County who stated that they are not U.S. citizens on jury duty forms went on to cast votes in elections. Either they failed to tell the truth when they were summoned for jury duty, or they cast illegal votes. Both are crimes. The same group previously found that about 40,000 people are registered to vote in both Virginia and Maryland.
It is a federal crime to cast votes if you are not legally eligible to vote. Non-citizens, whether in the country legally or not, are prohibited from voting in most local and all state and federal elections. Yet the VVA investigation found that hundreds of non-citizens have been voting in Frederick County, Maryland. One in seven Maryland residents are non-U.S. citizens.
“The lawsuit is the equivalent of the lookout spotting the iceberg ahead of the Titanic,” state Del. Pat McDonough told the Tatler. He added that the group’s investigation found a voter fraud “smoking gun.”
Maryland state law makes it easier for non-citizens, both those present legally and those in the country against the law, to vote. Maryland issues drivers licenses to legal and illegal aliens. Driver’s licenses in turn make it easier under the Motor Voter law to register to vote. Maryland also offers copious taxpayer-funded social programs to non-citizens in the state.
The group filed suit in Baltimore’s U.S. District Court on Friday. They are suing the Frederick County Board of Elections and the Maryland State Board of Elections.
Del. Pat McDonough (R-Baltimore and Harford Counties) detailed the alleged fraud in a Maryland press conference today. He is calling for a special state prosecutor because the fraud may be taking place statewide, with significant impact on Maryland elections. Maryland currently holds 10 electoral votes in presidential elections. McDonough is also proposing legislation including voter ID to close the loopholes that he says non-citizens are using to cast votes.
In a statement, Del. McDonough says:

There are frequent allegations in America and Maryland about the existence of voter fraud. In the case I am presenting today, there is documentation and a track record. The numbers and facts from the records in Frederick County are the tip of the iceberg. When these numbers are multiplied by including the other subdivisions in Maryland, the potential number is alarming and could change the outcome of a close statewide election.

Even more dangerous is the probability of many local elections that are decided by a few votes could be affected. All 188 members of the Maryland General Assembly are standing for re-election as well as many local office holders.
The important election that we have coming up demands that citizens’ votes are not diluted or cancelled by non-citizens who are not legally permitted to vote. The sanctity of the ballot box, because of the flawed system we are pointing out, has already been violated in previous elections.
The purpose of the lawsuit is to mandate those responsible for the administration of the election process will remove the non-citizens from the final voting count.
The purpose of the investigation by the special prosecutor is to penetrate more deeply statewide and determine why this fraud or any other related violation was allowed to occur.
The purpose of the legislation is to plug the massive loophole in current law which permitted these fraudulent practices to take place.
Maryland is a Democratic stronghold especially around its larger cities, but the governor’s race there is tightening as Republican Larry Hogan gains ground. Illegal votes could tip the balance if the legal vote is close enough on election day. “What if Hogan loses by 500 votes or 1000 votes?” McDonough asked.
Maryland Gov. Martin O’Malley is expected to run for the Democratic nomination for president in 2016. Del. McDonough noted that the fraud uncovered by VVA occurred on O’Malley’s watch."
___________________________________________________________________

Published on Feb 26, 2014
Alex welcomes Chris Driskill to the show a man who recently was asked to leaving a voting booth because of his pro 2nd amendment t-shirt.
Read More Here: http://www.infowars.com/man-wearing-p...

BAPTISTS ISSUE RESOLUTION CENSURING
HOUSTON'S LESBIAN MAYOR PARKER
"RESOLUTION ON THE HOUSTON PASTORS' SUBPOENAS":
SEE: http://the-trumpet-online.com/resolution-houston-pastors-subpoenas/; republished below in full unedited for informational, educational, and research purposes:
"30th Anniversary of the Unregistered Baptist Fellowship
Meeting at Victory Baptist Church, Paducah, KY, Oct. 20-22, 2014:
Whereas, the City of Houston, Texas has elected its first openly Sodomite (lesbian) Mayor, Annise Parker, and;
Whereas, the City Council of Houston passed a so-called Equal Rights ordinance that is destructive of the rights of others, as when it permits, encourages and helps so-called “transgender” people to claim discrimination if they are banned from restrooms, and;
Whereas, opponents sought through petition to introduce a ballot referendum on this perverse ordinance, and;
Whereas, City Attorneys responded by issuing a tyrannical, unprecedented demand that key pastors turn over their sermons, and other communications related to homosexuality and/or the immorality of the perverse, unjust ordinance, and;
Whereas, this demand of the pastors is an attack on the religious liberty and freedom of speech for which our Baptist forefathers suffered in order to teach and bring to our nation, before and during its birth, and;
Whereas, these liberties are not only God-given, Biblical and Natural Law rights, but are also codified by the First Amendment to the U.S. Constitution, as well as in the Texas Constitution;
Therefore, Be it Resolved that the City of Houston not only withdraw, but publically repudiate, this demand as unlawful, and issue an apology to the pastors of Houston;
Be it Further Resolved that the City of Houston repeal and repudiate its so-called Equal Rights ordinance, since the Bible and natural law teaches that homosexuality is a behavioral choice, and therefore a wicked sin, as much as adultery, stealing, murder, etc. (1 Corinthians 6:9-10; Romans 1:26-28).
Be it Further Resolved that the pastors of Houston examine their relationship with the state and make sure it conforms to the Biblical pattern, so that First Amendment rights are not complied by incorporation, 501(c) (3) tax exemption, and that the light of God’s countenance may be fully upon them.
Therefore, the Unregistered Baptist Fellowship, in the name of the God of the Bible (KJV), hereby rebukes Mayor Annise Parker, and the officials of Houston who have joined with her, in this unjust assault upon religious liberty and freedom of speech; and we stand with these pastors who are trying to check the wicked homosexual agenda in their city.
Pastor Greg A. Dixon, representing the pastors of the UBF, will be on location at the Houston, “I STAND SUNDAY meeting, Nov. 2.
Pastor Dixon was the pastor of the Indianapolis Baptist Temple when the IRS revoked the tax exempt status of the church in the spring of 1995 for the sermon content that emanated from the church including the subject of sodomy and other “federal policy” issues."
__________________________________________________________
Posted by John at 7:40 AM