‘Civil Disobedience on a Massive Scale’

in Response to SCOTUS Ruling Imposing

SEE: http://americansfortruth.com/2014/10/07/aftah-calls-for-civil-disobedience-on-a-massive-scale-in-response-to-scotus-ruling-imposing-homosexual-marriage-by-default-in-five-more-states/
Republished below in full unedited for informational, educational, and research purposes:


Contact: Peter LaBarbera, 312-324-3787;americansfortruth@gmail.com
October 7, 2014
AFTAH Calls for ‘Civil Disobedience on a Massive Scale’ in Response to SCOTUS Ruling Imposing Homosexual “Marriage” by Default in Five More States
Statement by AFTAH President Peter LaBarbera:
We are witnessing a “gradual Roe v. Wade” by which unelected judges impose homosexual ‘marriage’ on the nation. Hubris rules the day as millions of Americans’ votes defending actual marriage (one man, one woman) are negated by one court ruling after another. Each decision bastardizes America’s noble quest for racial justice by invoking “equality” for unions based on disordered sexual behavior that can never be “equal” to God-ordained sex within marriage. Now the nation’s highest court is content to let the ongoing disenfranchisement become law.
Yesterday’s action by the Supreme Court only solidifies the idea that the powerful elites who dominate politics, media and culture do not care what the people think, expressed through the ballot box or their elected state legislators. And if “We the People’s” votes do not count, then We live not in freedom but under tyranny. The notion that nine men and women in black robes know more about what constitutes marriage than 76 percent of Oklahoma’s voters is insulting and preposterous. Now is the time for civil disobedience on a massive scale: we hope that statesmen and citizens alike–in Oklahoma, Wisconsin, Indiana, Utah and Virginia—indeed, any state where the people’s will has been robbed by elitist judges—will reassert their state sovereignty against escalating judicial supremacy.
From a moral and spiritual perspective, no court or government action can—to quote from the ill-informed ruling by Appeals Court Judge Richard Posner–“confer respectability on a sexual relationship” between two people of the same sex. Homosexual activists yearn to be told that their defining sin is not a sin at all—and legalizing genderless “marriage” is their holy grail to achieve that end. “Love is love,” we are told, or rather scolded. But God is not mocked: the Scriptures are clear that homosexual practice is an offense against both God and the very bodies of those who practice it (as is all sexual immorality).
The truly loving thing for Christians to do is not to “bless” same-sex relationships but to guide men and women caught up in false homosexual identities to the One, Jesus, who will forgive them and guide them to a life pleasing to God. 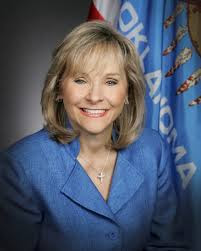 JUDICIAL TYRANNY: Oklahoma Governor Mary Fallin decried the Supreme Court action opening up the door to legal homosexual “marriages” in her state. In 2004, Oklahoma voters passed an amendment to preserve marriage as between a man and a woman by a three to one margin. Nevertheless, counterfeit “gay marriages” began yesterday in the conservative state.

SUPREME COURT UPHOLDS RULING AGAINST
STATE BAN OF “GAY MARRIAGE”
(Friday Church News Notes, October 10, 2014, www.wayoflife.org,fbns@wayoflife.org, 866-295-4143) - The following is excerpted from “Supreme Court Declines to Hear Gay Marriage Cases,” The Christian Post, Oct. 6, 2014: “The U.S. Supreme Court declined Monday to hear appeals from five states of appellate court rulings striking down state marriage laws. The decision to not hear the cases, for now, means that Virginia, Wisconsin and Utah will begin recognizing marriages of two people of the same gender. Since the appeals courts for those states cover other states, the decision could mean that an additional six states may be required to recognize same-sex marriages, even if the voters or elected bodies of those states chose to define civil marriage as only the union of one man and one woman. The Court was petitioned by both traditional marriage supporters and same-sex marriage supporters to hear the cases. The Court could be waiting for a split decision at the appellate level before hearing the cases. So far at the appellate level, the courts have only struck down state marriage laws. There are several cases pending at other appeals courts, however. If one of those courts upholds a state marriage law, the Court will be more likely to hear the cases. The Court has until January, if it is going to take up gay marriage this term. Ryan Anderson, William E. Simon Fellow at The Heritage Foundation, a conservative think tank, criticized the Court’s decision as leaving in place poor court decisions that trampled upon democratic processes, or government of the governed. ‘This is an unfortunate setback for sound constitutional self-government and a setback for a healthy marriage culture,’ he wrote. ... In a system of limited constitutional self-government, the people and their elected representatives should be making decisions about marriage policy...’ he wrote. Tony Perkins, president of the Family Research Council, a social conservative advocacy organization, also warned that the decision undermines democracy and the rule of law. ‘Even more alarming,’ he said, ‘lower court judges are undermining our form of government and the rights and freedoms of citizens to govern themselves. This judicially led effort to force same sex “marriage” on people will have negative consequences for our Republic, not only as it relates to natural marriage but also undermining the rule of and respect for law.’”
THE U.S. SUPREME COURT AND BIBLE PROPHECY


(Friday Church News Notes, October 10, 2014, www.wayoflife.org, fbns@wayoflife.org, 866-295-4143) - In ruling after ruling, the United States Supreme Court is fulfilling Bible prophecy. Most recently, it did so by letting federal court rulings stand, thus overthrowing the laws of states that forbade same sex “marriage,” effectively making this abomination the law of the nation. In 1973, in Roe v. Wade, the Supreme Court ruled that American women have the right to murder their unborn children that bear God’s image. The rule was based on a mythical “right to privacy.” In 1963, the Supreme Court ruled that Bible reading and prayer is not allowed in public schools. This effectively robbed students and teachers of their constitutional rights of free speech and the free exercise of religion. All of these were rulings against Almighty God and His holy Word. It is a fulfillment of Psalm 2, which describes the rulers of the earth taking counsel against the Lord and against His Anointed (Messiah in Hebrew andChrist in Greek). According to the 3,000-year-old prophecy, the rulers will say, “Let us break their bands asunder, and cast away their cords from us” (Psalm 2:3). That is a reference to a rejection of God’s law. Of course, the U.S. Supreme Court is not the only institution taking counsel against God. It is a global phenomenon in preparation for the rise of the antichrist and the Battle of Armageddon.

Posted by John at 9:16 AM Links to this post