NOW WHO'S STRAYING FAR FROM
GOD'S NATURAL LAW?
ROMANS 1:24-27-
"Wherefore God also gave them up to uncleanness through the lusts of their own hearts, to dishonour their own bodies between themselves: Who changed the truth of God into a lie, and worshipped and served the creature more than the Creator, who is blessed for ever. Amen. For this cause God gave them up unto vile affections: for even their women did change the natural use into that which is against nature: And likewise also the men, leaving the natural use of the woman, burned in their lust one toward another; men with men working that which is unseemly, and receiving in themselves that recompence of their error which was meet."

WILL PERVERSION BE THE NORM IN NEW YORK STATE, UNDER NIXON AS GOVERNOR?
“I think we need to abolish ICE. That seems really clear. They have strayed so far from the interests of the American people and the interests of humanity,” Nixon said.
HOW ABOUT ABOLISHING PERVERSION BY LAW? 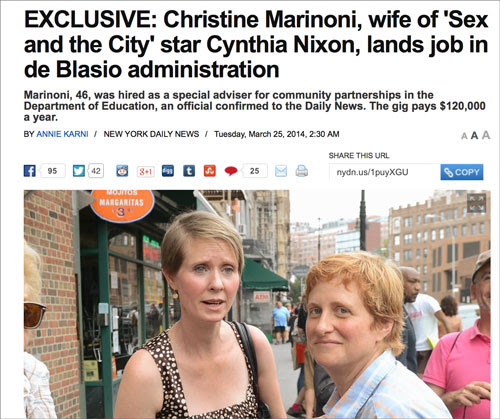 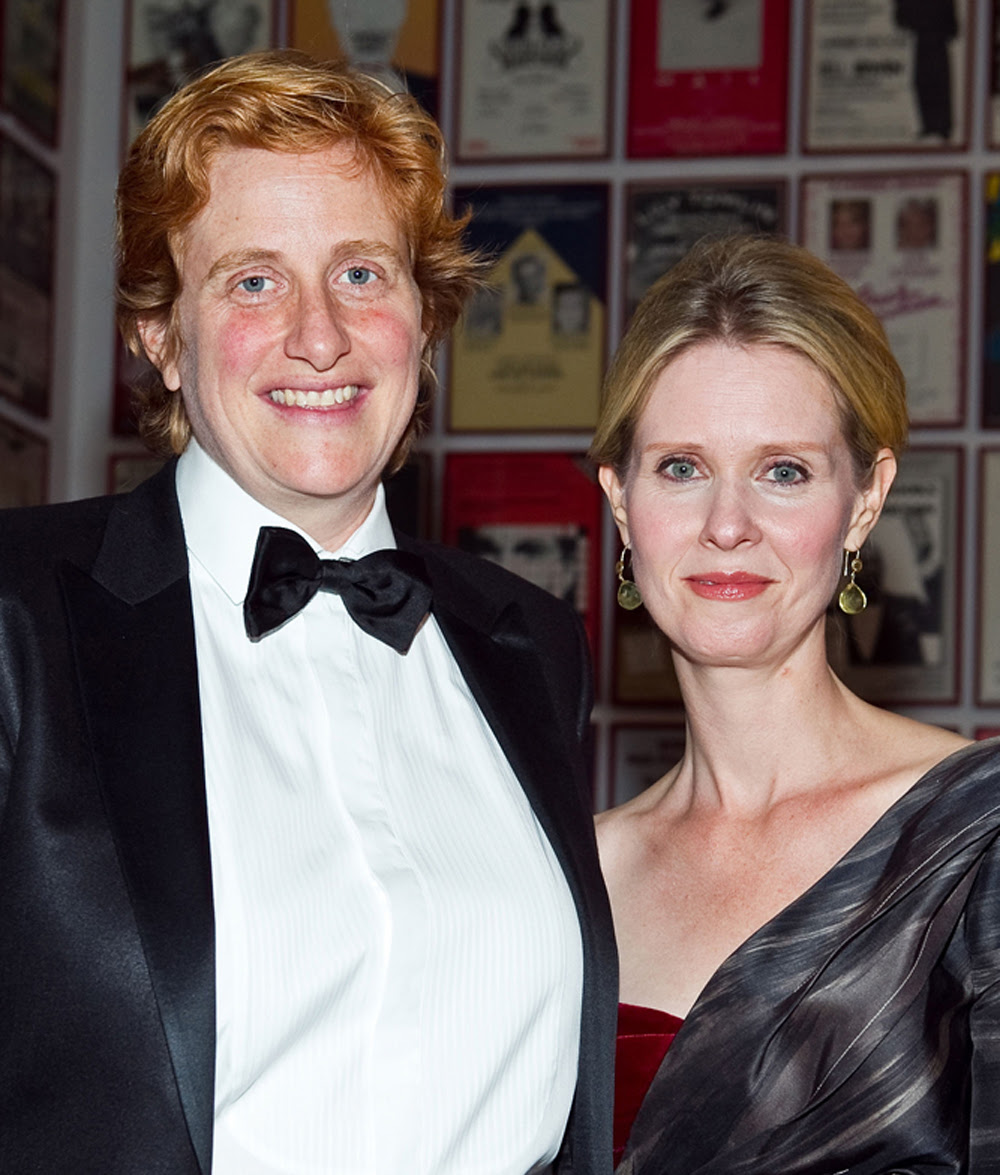 WITH SON, BY MARIONI, MAX ELLINGTON:
"Congratulations to Sex and The City star Cynthia Nixon, who announced yesterday that girlfriend Christina Marioni had given birth to a son, Max. Looking at their hair, you can see that Christine is pretty butch. And it’s a shame that some people assume that because Cynthia’s more feminine, she would take on the female role of being pregnant." "Cynthia is also the mother to 15-year-old Charles Ezekiel Mozes with her ex-husband Danny Mozes and Max Ellington Nixon-Marinoni, 7, with her wife Christine Marinoni."
QUOTE ABOVE FROM:
https://lesbianhair.wordpress.com/2011/02/10/cynthia-nixon-christine-marinoni/ 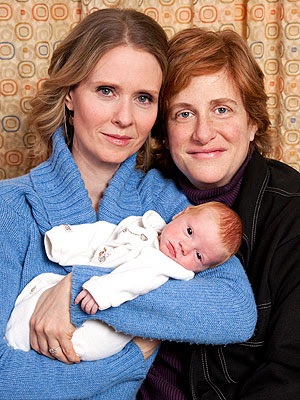 SEE: https://www.infowars.com/dem-ny-gov-candidate-ice-is-a-terrorist-organization/; republished below in full unedited for informational, educational and research purposes:

New York gubernatorial candidate and former “Sex And The City” actress Cynthia Nixon called for the abolition of U.S. Immigration and Customs Enforcement (ICE), saying it is a “terrorist organization.” 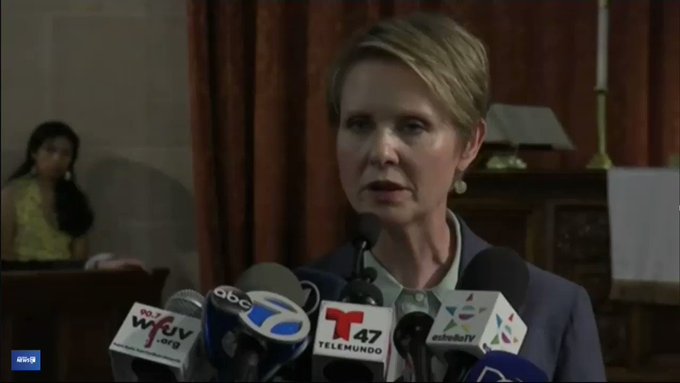 
Nixon was at a church in Manhattan’s Upper West Side Thursday, where an undocumented immigrant is avoiding deportation, when she told NY1 News, “ICE has strayed so far away from its mission. It is supposed to be here to keep Americans safe but what it has turned into is frankly a terrorist organization of its own that is terrorizing people who are coming to this country.”
On the same day Nixon labeled ICE terrorists, she called for the agency to be completely abolished while appearing on “The View.” 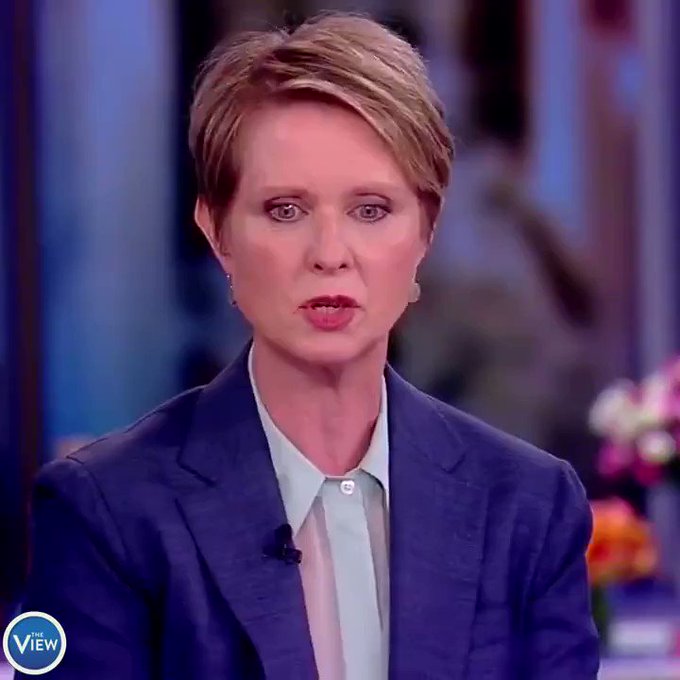 Cynthia Nixon to @theView: "I think we need to abolish ICE."


“I think we need to abolish ICE. That seems really clear. They have strayed so far from the interests of the American people and the interests of humanity,” she said.
Watch the full video below:

‘They’re using it to symbolize a policy, and that was not the case on this picture’

BY ADAN SALAZAR
SEE: https://www.infowars.com/border-patrol-agent-in-family-separation-photo-disputes-media-narrative/; republished below in full unedited for informational, educational and research purposes:

The image of a crying child at the border is being grossly misrepresented by the mainstream media, the Border Patrol agent who appears in the famous photo says.
On Friday, CBP agent Carlos Ruiz, whose legs appear in the photo as he’s searching the girl’s mother, cleared up the severely distorted events behind the viral image.
“We were patrolling the border, it was after 10 o’clock at night,” agent Ruiz explained in an interview with CBS.
“We asked her to set the kid down in front of her, not away from her… and so we can properly search the mother. So, the kid immediately started crying as she set her down,” Ruiz noted. “I personally went up to the mother and asked her, ‘are you doing OK, is the kid OK?’ and she said, ‘Yes, she’s tired and thirsty and it’s 11 o’clock at night.”
“They’re using it to symbolize a policy and that was not the case on this picture,” he added. “It took less than two minutes, as soon as the search was finished she immediately picked the girl up and the girl immediately stopped crying.”
The crying girl has been the poster child for the media’s contrived outrage over illegal immigrant family separations being blamed on Donald Trump. The child was even featured on a Time Magazine cover with President Trump looking down on her.

The Story Behind TIME's Trump 'Welcome To America' Cover

The photograph of a two-year-old Honduran girl is featured on the July 2 cover
time.com

Twitter Ads info and privacy
Later, after the actual facts behind the photo emerged, Time added a correction to the bottom of their article, noting the girl had never actually been separated from her mom.
View image on Twitter

Mark Dice ✔@MarkDice
Time issued a correction at the very, very, very bottom of their fake news article about the little girl getting taken away by border patrol agents.

Twitter Ads info and privacy
On Thursday the child’s father, Denis Javier Varela Hernandez, revealed the truth behind his family’s plight, telling The Daily Mail his wife left their home in Honduras with $6,000 against his wishes. She reached the United States about a month later with the help of human smugglers.
“I know now that they are not in danger. They are safer now than when they were making that journey to the border,” Hernandez told the Daily Mail.
“I don’t have any resentment for my wife, but I do think it was irresponsible of her to take the baby with her in her arms because we don’t know what could happen.”
The Daily Caller reports the mother had been previously deported for attempting to illegally enter the US in 2013.
Facebook: https://www.facebook.com/adan.salazar.735 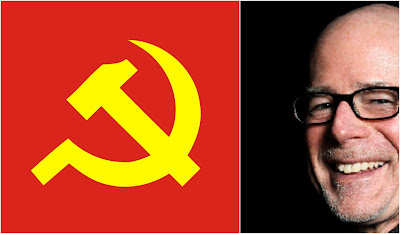 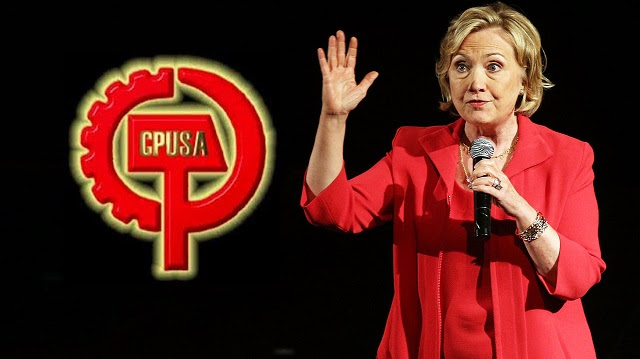