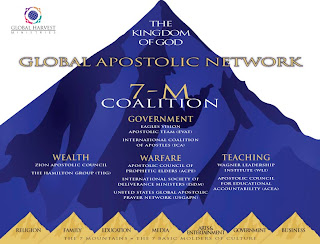 http://www.deceptioninthechurch.com/thirdwaveteachings.html
http://1.bp.blogspot.com/-uZVx9B3SsDM/Tm6Zs739gSI/AAAAAAAAACQ/IlicbiW_vVo/s1600/7m.jpg
Above is a picture/diagram/schematic of the 7 Mountains Mandate subscribed to by the New Apostolic Reformation which is a loosely organized movement of dominionist, charismatic, pentecostal, and word of faith leaders, churches, and political figures. It basically makes the assumption that the churches and Christians in general should involve themselves into seven areas of life with the aim of taking control over them. Since a lot has already been written on this movement by others, the purpose here is to introduce this movement to those unfamiliar with it and to point to the appropriate sites where existing research lies.

First, this video of Lance Wallnau, apologist for the 7 Mountain Mandate, promotes the Dominionist view:

Second, this video from the 7 Mountain Apologists Wallnau, Hillman, and Enlow who are tailoring their "terminology" to the audience, and are heistant to say they are creating a "new theology":

Have you ever taken a "spiritual gifts survey" after your pastor or elders recommended it in a sermon about the multitude of gifts we have as members of the body of Christ, only to be told later that you are not mature in the faith yet, have to be discipled, and/or "watched" for an indeterminate length of time before you can use these gifts, or that the gifts "reside" in the eldership alone? Do these attributes look familiar to you about your church and elders?:
1)"A giant tongue that speaks with absolute authority, and a giant ear that listens with unquestioning obedience."
2)"But some ministers cannot endure the process of maturing in the sheep."
3) "Dictatorial measures make lesser men craven and dependent, stunting their true growth." (See above 3 quotes below in Reisinger article).
First, as an introduction, Jon Zens of Searching Together http://www.searchingtogether.org, presents the following video, in which he proposes that there should be no distinction between clergy and laity or any sort of contrived hierarchical structure in the church, the "body of Christ". Perhaps what we are seeing or personally experiencing in abusive "divinely appointed" or "duly authorized" eldership is due to the inordinate and excessive powers assigned to and assumed by the leadership to the detriment of the laity. "A horrible and shocking thing has happened in the land: The prophets prophesy lies, and priests rule by their own authority, and my people love to have it this way." Jeremiah 5:30,31"           Whatever happened to the "priesthood of believers" (1Peter2:5 "Ye also, as lively stones, are built up a spiritual house, an holy priesthood, to offer up spiritual sacrifices, acceptable to God by Jesus Christ", and 1Peter2:9 "But ye are a chosen generation, a royal priesthood, an holy nation, a peculiar people; that ye should shew forth the praises of him who hath called you out of darkness into his marvellous light"). He does not specifically refer to Reformed Baptist churches or elders.


The following is a link at Wicked Shepherds: http://www.wickedshepherds.com/WhenShouldaChristianLeaveaChurch.html to a reprint of John Reisinger's article "When Sould a Christian Leave a Church", which specifically addresses Reformed Baptist abuse. Some quotes from this article are:
"law ministry" where the Elders were the "Lords and Masters"
"pastor had deliberately placed himself between the husband and wife"
"daring to question God's "duly authorized" minister"
"you are so sick spiritually that you can't think straight."
"Whose glory is in their shame,"
"Our preacher did not step on our fingers, he used a sledge hammer."
"The preaching of the law that sends believers home week after week with a despondent and despairing heart"
"The legalist binds your conscience to the law"
"sheep are led to true peace by whipping them with the law every week"
"no right to feel "secure in Christ" until his daily life can "pass inspection" by the "holy Law of God."
"afraid and terrified" even to speak what was in their hearts for fear of the elder's discipline?"
"personally being treated like a dog"
"beating the sheep into subjection"
"The Confession of Faith is clear. Who are you to dare contradict that venerable document."
"Arrogance and an overbearing spirit is never acceptable in elders."
"Yet a church may be as much injured by tyranny as by anarchy."
"Sheep cannot be whipped and driven into conformity with pastoral wishes."
"you are actually part of a cult and you have totally given up your true liberty in Christ."
"use the office of elder and deacon as a carrot stick to award the "really loyal devotees."
"domineering spirit in the elders."
"the office of elder is almost raised to the level of priest."
"The people under such a pastor "run to him for decisions" about their whole life."
"they have a view dangerously close to the autocracy of Rome."
"he must seek to put your neck under the yoke of law"
"They threw out the church's authority over your soul but hung on to the church's authority over your conscience."

"When a situation gets to the place that men are willing to literally turn children against their parents, and turn wives and husbands against each other, then it is time to speak loudly and clearly."
"When believers are taught to actually hate another believer simply because he dared to challenge the pastor, the cultic mentality must be exposed"
In this regard, Albert Martin, former head pastor of Trinity (Reformed) Baptist Church, Montville, NJ quotes from Luke 14:26 to justify their form of discipleship to Christ, stressing the hate aspect more than the discipling:
http://www.sg-audiotreasures.org/singular/am_nonnegotiableterms.mp3 Audio and video of this is among many of his sermons at http://www.sg-audiotreasures.org/am.htm.