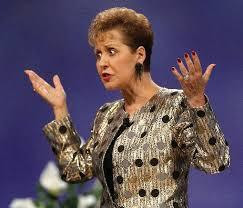 THE SELF-ENTITLEMENT
OF JOYCE MEYER'S THEOLOGY
BY RICHARD HAAS
SEE: http://pulpitandpen.org/2016/09/30/the-self-entitlement-of-joyce-meyers-theology/; republished below in full unedited for informational, educational, and research purposes:

Just earlier this month on September 13th, Joyce Meyer released her new book entitled “Seize The Day.” As it seems to be the case more and more every form of a distributor that can distribute anything seemingly “Christian” is jumping on the bandwagon of this nomenclature of sub-Christian literate.
Over the past couple of week’s Joyce Meyer has been releasing tweets on Twitter to draw attention to the publication of her book. She has been promoting her book with colorful, but often inaccurate statements.  One of those more theologically inept utterances was tweeted out on September 22nd. The shallowness of these 140 words pulls back the curtain and allows us to see one of the biggest lies in the Word of Faith theology and the movement itself — Self-Entitlement.
Teaching such as found above by Joyce Meyer in her tweet are sadly becoming more numerous by the day.  These statements by these false proclaimers of twisted truth, who worship a god, not of the Bible need to be exposed for what they are.  It is not only the tweets put out by false teachers like Joyce Meyer but her books that do extensive damage by deceiving countless numbers of people into thinking that they are following the God of the Bible, but in reality, they are following a God of their making.
As gathered from the above screenshot of Joyce Meyer’s “#SeizeTheDay” tweet we can see that it is problematic at best and heretical at worst. The meaning behind this tweet is duplicitous in its representation of God. The meaning behind this statement is simple. Joyce Meyer’s message takes and elevates man above God. It is this premise of self-entitlement puts God in the position of owning man something for man following God. In the simplest terms, it comes down to a mentality of “God owes us.”
This self-indulgent attitude towards our position before God is contrary to Scripture. We are told in Scripture (Matthew 5:12) our reward is eternal, not earthly. We are not told to “have what belongs to me as a child of God!” It is that very principle that undermines who we are in Christ. This self-indulgent attitude is a very commonly taught misconception among Word of Faith teachers and followers, the elevation of man’s position above that of Christ and even God. The Bible clearly states the opposite of what is taught by people such as Joyce Meyer. We better understand where we stand before Christ and God when we look at these verses, 1 Corinthians 7:22; Ephesians 6:6; and 2 Timothy 2:24. It is made evident in these verses that we are “bond servants to Christ.” The biblical position of man in relationship to Christ is quite different than that of the position held by Word of Faith teachers.
While Word of Faith teachers like Joyce Meyer promotes a man-centered theology that concentrates on the fulfillment of Maslow’s Hierarchy of Needs.  Biblical theology proclaims our need for a Savior and the need for our self-actualization to be found in not choosing an attitude of self-entitlement, but in on of humbleness towards our Lord and Savior. Those who understand their position before Christ rightly know that we are “slaves” to Him who has saved us. We realize that we are owed nothing here on earth, that our greatest “entitlement” here on earth is to pick up our Cross and follow Him daily.
See also:

Posted by John at 4:05 PM Links to this post

Published on May 30, 2016
France has the largest Jewish population in Europe, estimated at 500,000 to 600,000 people, and a growing number of them have effectively become internal refugees. People like Alain Benhamou, who decided to move from his home of 40 years after his second break-in, are fleeing insecurity and seeking protection in numbers in an atmosphere they say is increasingly hostile, and often expressed in relation to conflict in the Middle East.

Why 10,000 French Jews Will Move to Israel This Year

Posted by John at 2:06 PM Links to this post

TRUMP SUPPORTERS VIOLENTLY ASSAULTED NATIONWIDE
Published on Sep 29, 2016
Trump Supporters are being violently attacked across the US by the so called "tolerant" left.
REPORT BY MARGARET HOWELL OF INFOWARS

CO-CONSPIRATORS
FBI's Comey: Hillary Crony
Fronts For DOJ's Loretta Lynch
Published on Sep 29, 2016
James Comey was called before Congress again today in the face of continuing cover-ups and suspicious granting of immunity. He told the committee to stop calling him “a weasel” as he continues to prevaricate about Hillary’s felonies. We look at his ties to Hillary, and his politicization of the FBI as another Clinton surrogate uses the hearing to push for an FBI investigation of Roger Stone’s activities as a journalist.
Trey Gowdy Finds Out Department Of Justice Has Been Covering Up Hillary Clinton's Lies
Trey Gowdy Wants To Ask FBI Director James Comey If Justice Is Still Blind
Gohmert RIPS Comey: You Gave Immunity To People Who Could Have Made Your Case!

MICHAEL SAVAGE CENSORED AS POPE CALLS JOURNALISTS "TERRORISTS"
Published on Sep 29, 2016
Michael Savage & Alex Jones spoke 2 weeks ago about the coming censorship and 2 days ago we saw it in action as Savage had his show shut down when he began talking about Hillary’s health. But he’s not alone. Donald Trump Jr.’s social media post was censored over “copyright” 10 days after it caused a stir. And the Pope has labelled as “terrorism’ any journalism he subjectively labels as “gossip” or “rumor” (think “conspiracy theories” or “deplorable”).
SAVAGE INTERVIEWED BY ALEX JONES

TOO BAD THAT EXPOSING THE CLINTONS' EVIL & CORRUPTION
IS A PAINFUL "DISTRACTION"
$850,000 SETTLEMENT WITH RAPE VICTIM BRINGS THEM TO TEARS, BUT NOT THE RAPE
PLAYING THE VICTIMS
IS TYPICAL DEMOCRAT FORM
CHELSEA IDENTIFIES CLINTON FAMILY WITH MINORITIES ALLEGEDLY ABUSED BY TRUMP 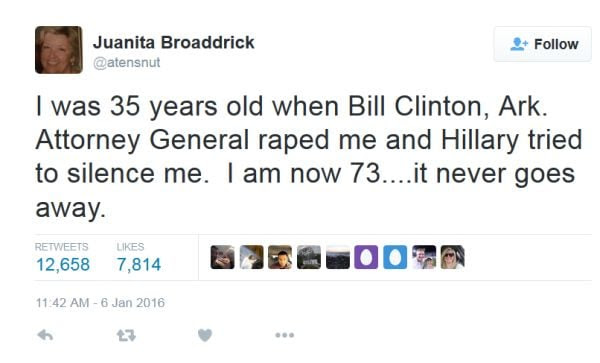 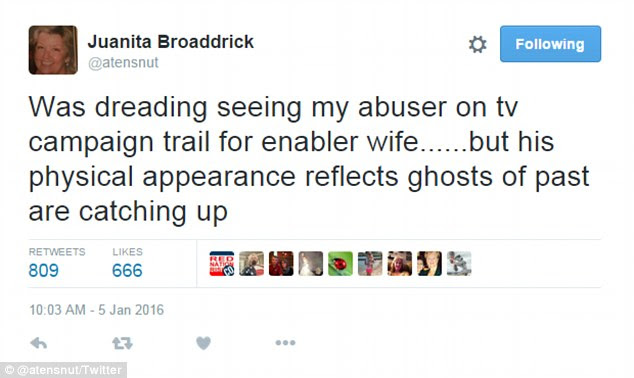 Juanita Broaddrick: "Your parents are not good people"

Alleged Bill Clinton rape victim Juanita Broaddrick reacted to Chelsea Clinton’s complaint about people attacking her family by reminding Chelsea that her father is a “sexual predator”.
After Donald Trump took the high road by refusing to bring up the plethora of sexual abuse accusations against Bill Clinton during Monday night’s debate with Hillary, Chelsea Clinton used an interview with Cosmopolitan as an opportunity to play the victim.
“Candidly, I don’t remember a time in my life when my parents and my family weren’t being attacked, and so it just sort of seems to be in that tradition, unfortunately. And what I find most troubling by far are … Trump’s continued, relentless attacks on whole swaths of our country and even our global community: women, Muslims, Americans with disabilities, a Gold Star family. I mean, that, to me, is far more troubling than whatever his most recent screed against my mom or my family [is],” she said.
Broaddrick responded to Chelsea’s lament that she couldn’t remember a time when her parents weren’t under attack with a terse rebuttal.
“There’s a very good reason for this – your parents are not good people,” tweeted Broaddrick.
“Your father was, and probably still is, a sexual predator. Your mother has always lied and covered up for him,” she added.
“I say again “I was 35 when Bill Clinton Raped me and Hillary tried to silence me. I am now 73. It never goes away”.
“The truth is what has brought the attacks on your family and you are smart enough to know that by now,” she concluded.
Broaddrick (pictured above) alleged that Bill Clinton sexually assaulted her during an April 1978 incident that took place in a room at the Camelot Hotel in Little Rock, Arkansas.
During the assault, Broaddrick claims Clinton bit down on her lip, causing her to bleed.
She also alleges that Hillary Clinton later approached her at a Clinton fundraiser and subtly threatened her to keep quiet about the attack.
Bill Clinton denies the allegations and refuses to comment on them. In his book, No One Left to Lie To, acclaimed author Christopher Hitchens documents how Broaddrick’s claim is credible and has many similarities with Paula Jones’ later allegation of sexual assault against Bill Clinton.
Clinton eventually agreed to pay Jones an out of court settlement of $850,000.
________________________________________________
Bill Clinton 'rape' accuser Juanita Broaddrick lashes out at Chelsea Clinton
Published on Sep 29, 2016
A former Arkansas nursing home administrator who has accused Bill Clinton of raping her nearly 40 years ago lashed out at Chelsea Clinton on Wednesday for minimizing her father Bill's past sex scandals.
'Your father was, and probably still is, a sexual predator. Your mother has always lied and covered up for him,' Juanita Broaddrick wrote on Twitter.

Bill Clinton Rape Victim Juanita Broaddrick Fears For Her Life
Published on Aug 25, 2016
During the half hour interview Josh Sigurdson conducted with Juanita Broaddrick who was brutally raped by Bill Clinton during his time as attorney general in Arkansas as well as threatened subsequently by Hillary Clinton, Juanita admitted that she does indeed fear for her life and her safety. So much so that she is selling her home so she can build on her son's property to stay close to others.
She says living alone frightens her, especially with her name in the media so much and the potential the Clintons have if Hillary Clinton becomes president.
In the 90s, Clinton enemies dropped like flies. The list is extensive and Larry Nichols backs up much of it. Recently, once again, countless Clinton enemies are ending up dead under extremely mysterious circumstances. Many freak accidents as well as point blank murders have happened in recent months. 7 people who either worked with the Clintons at the DNC, served lawsuits against them or were due to testify against them have ended up dead over the summer season this election year.
After a while it's unreasonable NOT to question such a large number of freak accidents.
We wish Juanita Broaddrick all the best. She's a very kind woman with a record of doing great things for those that need it the most. On top of that she's a proud grandmother and a vigilant voice.

You can find our FULL interview with Juanita Broaddrick on our channel!

Graphics by Josh Sigurdson
Visit us at www.WorldAlternativeMedia.com

Email ThisBlogThis!Share to TwitterShare to FacebookShare to Pinterest
Labels: Medical

OBAMA'S EDUCATION SECRETARY "CONCERNED" ABOUT HOMESCHOOLING
BY ALEX NEWMAN
SEE: http://www.thenewamerican.com/culture/education/item/24162-obama-s-education-secretary-concerned-about-homeschooling;
Posted by John at 9:40 AM Links to this post