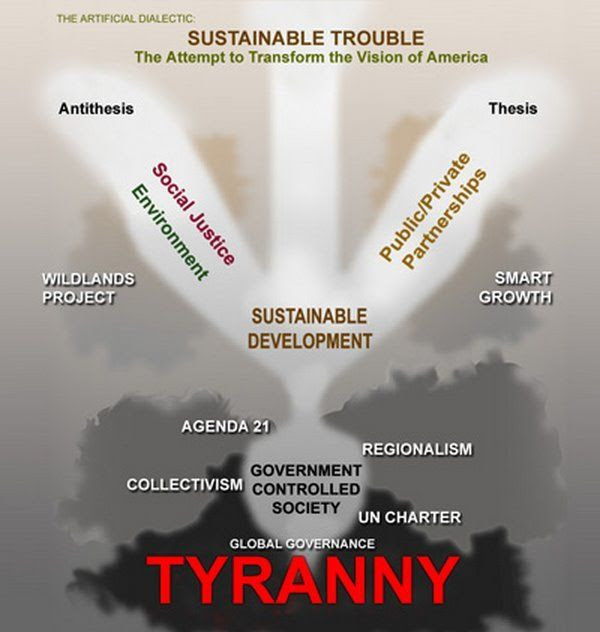 Agenda 21: Not a Conspiracy Theory. It's the destruction of our Republic:
Published on May 14, 2015
As I'm sure you remember, last year, the Cliven Bundy family ranch was invaded by federal agents from the Bureau of Land Management (BLM). That caused a dramatic standoff between the federal agents and concerned American citizens to rush to stand by the Bundy's side. As the television and video cameras rolled, the federal agents to back down Recently I was invited by the Bundy family to provide a short presentation to the Bundy followers about Agenda 21 so that Americans can know the root of that federal action. Here is the video that I provided.

Published on May 27, 2015
BINGHAMTON, NY-- Tom DeWeese http://americanpolicy.org/ is a foremost authority on property rights and has been analyzing and presenting information on UN Agenda 21 a.k.a. Sustainable Development in its various forms for over 20 years. Tom has developed videos and curriculum to inform the public about the dangers of UN Agenda 21 a.k.a. Sustainable Development and has successfully stood against it in many areas around the nation. May 15, 2015

Published on May 5, 2015
Tom DeWeese speaks to the International Property Rights Association in Ontario, Canada, addressing why private property rights are the only way to end poverty and create wealth around the world.

Rosa Koire Speech about Agenda 21
The speaker is Rosa Koire, the author of "Behind the Green Mask" which explains what Agenda 21 really is. Rosa Koire is a Democrat speaking before a group of Tea Party Members. UN Agenda 21 doesnt discriminate based on Political Affiliation, Race, Sexuality, Creedo or whatever. Agenda 21 is about the Extermination of Mankind and Ultimate Control for those that are left. Those in power know that they cannot follow through on their plans unless Liberty, Money and Property are taken away. This is in their own literature and UN Agenda 21 DEMANDS Zero Economic Growth.
Agenda 21 is about World Dominance and nothing else. The Wars, Attack of Christians, Attack of God & Religion, Chemtrails, Economic and Monetary Collapse, Government Corruption, Carbon Taxes, Gun Control, CORPORATE Owned Media, UFO Sham, Erosion of Rights, Lies About Global Warming, Lies About Overpopulation, Perversion of Societal Values, Dumbing Down, Drugs, Substandard K-12 Education, Monsanto, are all a result of the Mandates set forth by U.N. Agenda 21.
At the Rio 2012 Summit on UN Agenda 21, it was stated that "Governments should invest their transportation money on Public Transportation because roadways only largely benefit those that own vehicles". Really? I thought Roadways benefitted the Economy and Society as a Whole. Roadways get us to and from work, to grocery stores, to the bank, to restaurants, to shopping malls. Roadways transport our food and things we need. The UN intends to Impede our Right to Travel and Pursuit of Happiness.
As far as the Middle East Wars go, Reagan demonstrated that war is unnecessary. When Khadaffi was openly threatening us, Reagan bombed his house and we didn't hear much from him after that. The other middle east countries quickly fell in line and repaired their relations with us. With the technology we have today, and that includes Intelligence, Satellite, SDI, Drones and DEWS, we could take out the hostile leaders of these countries without having to go to war.
How did it come to this? It all started with the Fabian Society and the Act of 1871, where Congress created the DC Corporation & created a new Constitution, then the FEDERAL US GOVERNMENT became a Corporation. As the largest Corporate Conglomerate on the planet, the US GOVERNMENT owns majority shares in ALL of THE Fortune 500 Companies and their CAFR reports prove this (See the channel belonging to CorporationNation "Dear Matt Damon" videos). The Act of 1871 was not only Unconstitutional, but is INVALID. The FED GOVERNMENT we have today is the De Facto, or Shadow Government. But, we cannot do anything about that now but we can put a halt to the Ultimate Goal, which is this Evil Agenda and then begin to put this Great Country of ours back together and reverse the treasonous legislation. We must also OUST anyone who showed any inkling of support for UN Agenda 21. UN Agenda 21 has been in the works for decades, now, and is the primary reason for the corruption & depravity we see everywhere today at all levels.
Don't let yourselves be fooled - everything else is a smokescreen to keep your attention away from Agenda 21. Once Agenda 21 becomes fully implemented, all hope is lost. Get the information out to your neighbors, home owners, business owners. Chances are, they have never heard of UN Agenda 21. Since Agenda 21 is implemented Locally, once the people are mobilized, they can take the issue to their City Council and County and put a halt to all policies, monies and ties to UN Agenda 21 and ICLEI.
We cannot change the past but we can affect tomorrow by the actions we take Today.
IF WE CAN ABOLISH AGENDA 21 WE CAN BEGIN TO FIX OUR NATION AND RESTORE THE ORIGINAL CONSTITUTION AND HAVE THE GOVERNMENT "OF THE PEOPLE, FOR THE PEOPLE" .
www.democratsagainstunagenda21.com

SEE: http://www.thenewamerican.com/tech/environment/item/20957-un-and-media-plan-sustainable-development-propaganda-blitz;
EXCERPT:
The United Nations and its dizzying array of agencies, along with the UN Foundation, media “partners,” and other allies, are preparing a massive propaganda campaign to promote the next 15-year UN “sustainable development” master plan for humanity and the planet. From unleashing what is being described as the “world’s largest advertising campaign” to “training” and subsidizing so-called journalists to report favorably on the scheming, the UN and its friends are going all-out on “public relations” — much of it with your money.