OBAMA'S SECRET NO FLY LIST: SHADES OF NAZI GERMANY~AND WHO IS BEING ADDED TO IT? GUN OWNERS, PATRIOTS, CHRISTIANS? 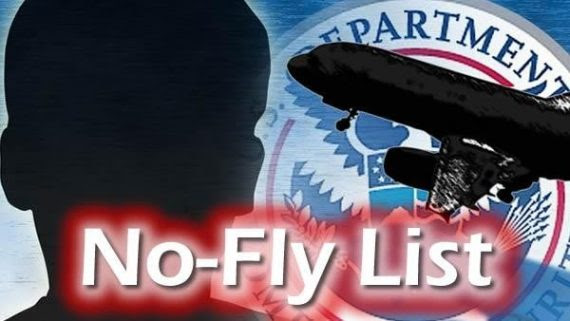 by CHUCK BALDWIN
SEE: http://chuckbaldwinlive.com/Articles/tabid/109/ID/3399/No-Fly-List-Shades-Of-Nazi-Germany.aspx; republished below in full unedited for informational, educational, and research purposes:

Democrat Congressman Mike Thompson (CA) and Republican Congressman Peter King (NY) are trying to push a bill through Congress that would deny gun purchases to people who are on the federal government’s “no-fly” list. President Obama took to the national airwaves a few days ago to further pressure Congress to pass this legislation. King introduced H.R. 1076 back in February of this year. Now, after the shootings in California, Thompson has filed a discharge petition in an attempt to force a vote on the bill. Senate Minority Leader Nancy Pelosi is trying to muster support for the bill in the upper house of Congress.

The “no-fly” list was created by President G.W. Bush and when he left office contained 47,000 names. Today, the list has climbed to over 700,000 names. There are no specified reasons why someone’s name is added to “the list.” In fact, the criterion for determining who is added to the list is totally secret. Not even Congress knows what it is. The technology website TechDirt.com estimates that at least 40% of the list is comprised of individuals who have absolutely no connections to terror groups or activities. In other words, they are American citizens just like you and me.

Oh! That reminds me: while I was running for President of the United States on the Constitution Party ticket in 2008, I WAS told at the San Antonio, Texas, airport that my name was on “the list.”

I traveled the better part of 100,000 miles across the continental United States during that campaign. I had a campaign rally on a Saturday mid-morning in San Antonio. I landed at the airport around midnight Friday night. The rally was conducted as scheduled, and I was back at the San Antonio airport to fly to my next stop around noon. I was on the ground for approximately twelve hours. I never had a problem flying before this event.

However, when I tried to fly out, I was denied a boarding pass (third party candidates don’t fly on private jets) and shuffled off to an isolated booth where I was told I was on “the list.” Two men dressed in full battle uniform, complete with body armor, Kevlar helmets, and M16 rifles walked up behind me. To make a long story short, after over an hour of interrogation and phone calls to “upper management,” I was told I would be allowed to fly “this time.”

Yes, that experience in San Antonio was the only time it happened to me; and I’ve logged over 300,000 skymiles since then. But, I was politely told in San Antonio that “once you’re on the list, you NEVER get off.” And I have been routinely subjected to all kinds of “special” scrutiny at I-couldn’t-count-how-many airports since then. So now, Obama, King, Thompson, and Pelosi want to tell me (and hundreds of thousands of people like me) that I cannot purchase a firearm?

And I’ve had it better than some. The trials and tribulations of tens of thousands of innocent air travelers whose names have made it to “the list” are legendary.

For example, the late Senator Ted Kennedy’s name was on the “no-fly” list, and he was denied a boarding pass numerous times. Can you imagine: a U.S. senator?

I could see not letting Ted Kennedy have a driver’s license--but a plane ticket? Get real!

And lest you think that denying a fundamental liberty to people on a government watch list is a good idea, remember, YOUR NAME MIGHT BE ON THE LIST. Or if it’s not now, it could be added at any time and for any reason. Some of the people whose names are on “the list” are people who, coincidentally, have taken contrary political positions from those in power.

No. People in OUR government would never stoop to adding those with differing political opinions to a government watch list, would they? Like Hades they wouldn’t! They would, and they do.

The Fifth Amendment to the U.S. Constitution declares, “No person . . . [shall] be deprived of life, liberty, or property, without due process of law.” Depriving an America citizen of his or her liberty to purchase a firearm (thus denying the fundamental right of self-defense) by the simple act of a government bureaucracy adding one’s name to a list (with no criminal conduct being committed) smacks of totalitarian regimes such as Hitler’s Germany, Stalin’s Russia, and Mao’s China. Such a thing is repugnant to the very heart and soul of America’s historic ideals and principles.

Writing for The Washington Post, Philip Bump writes, “[T]he no-fly list is a secret list that uses secret criteria to determine who finds a home on it. So if you link banning guns to the no-fly list, the scenario presented is completely feasible: The government could theoretically add anyone it wants to the no-fly list, even broad categories of people, and thereby prevent them from owning a gun.”

Bump continues saying, “Particularly when applied to the ability to own a firearm, many would argue that the no-fly list is a violation of the 5th Amendment, which guarantees the right to due process before people are deprived of life, liberty or property. During the ACLU's lawsuit, the government admitted that people are added to the list speculatively, before they've actually done anything wrong.”

“The list is itself almost necessarily a slippery slope. ‘There's very little incentive for any particular government official to narrow the list,’ Sparapani said. ‘It's much easier to put more and more names on it.’ The overlap of politics and terror fears makes officials err on the side of caution. ‘If the list really does need to be in the hundreds of thousands’ -- as it appears to be -- ‘we've got much bigger problems than if people should be able to get on airplanes,’ he said.

“And then, of course, there's the other question.

“‘Who are these people who are so dangerous that we can't let them on planes, but we haven't gone out and arrested them?’ Sparapani asked. ‘At what point do we actually take action against them if they're under what we think of as passive surveillance? ... If they're too dangerous to be put on a plane but not too dangerous for us to arrest them, what exactly is this list about?’

“Asked another way: Who is too dangerous to be on a plane but not dangerous enough to walk around in public -- and should that person be denied the right to own a firearm because they land somewhere in that gray space? President Obama's goal was not really to keep the guns out of the hands of possible terrorists, in part because the overlap of the no-fly list and possible terrorists looks more like a Venn diagram than a circle. It was, instead, part of his effort to limit the availability of guns in general, using the no-fly list as a tool.”

Of course, Democrats Hillary Clinton, Bernie Sanders, and Martin O’Malley support denying people on the “no-fly” list access to firearms. (Remember, this list includes hundreds of thousands of innocent people.)  So far, the only Republican presidential candidate who has intimated that he would support this draconian legislation is Donald Trump. Not even big-government toadies Jeb Bush and Marco Rubio are supporting it.

As much as I liked Trump initially (and I still like the fact that he is not an establishment insider), his rhetoric is becoming increasingly authoritarian in nature. I am now questioning his constitutional aptitude and fidelity.

If the government can ban a citizen’s right to keep and bear arms (or any other constitutionally-protected liberty) by simply putting them on a list, WE ARE ALL IN SERIOUS TROUBLE. Trump touts a pro-Second Amendment position, but if he would support this kind of governmental overreach, his commitment to the Second Amendment (and to the Constitution in general) is non-existent.

Regardless, the push is now on to pass Peter King’s backdoor gun-control legislation: H.R. 1076. I urge readers to contact their senators and congressman IN MASS and let them know that the American people will NOT tolerate this extreme violation of constitutional liberties. This might be Barack Obama and his gaggle of gun-grabbers’ last opportunity during his administration to enact more gun control. And, again, they are capitalizing on a mass shooting in a gun-free zone as impetus for their tyranny. It never dawns on them that these shootings always take place in a gun-free zone. Instead, they want to turn the entire U.S. into a gun-free zone.

And, unfortunately, FOX News, a host of “conservative” radio talk show hosts, many so-called “conservative” Internet bloggers, thousands of Christian pastors throughout the country--and now Donald Trump--are incessantly instilling the fear of Muslim terrorism into the hearts of the American people. This only enables big-government toadies in enacting more and more government usurpation of our liberties. “Keeping us safe” is ALWAYS the mantra used by government to enslave its people.

We need to ever remember the sage counsel of Benjamin Franklin, who said, “Those who would give up essential liberty to purchase a little temporary safety deserve neither liberty nor safety.”

And what was it that the famous German pastor and theologian Martin Niemoller said about the Nazis:

“First they came for the Socialists, and I did not speak out--because I was not a Socialist.

“Then they came for the Jews, and I did not speak out--because I was not a Jew.

“Then they came for me--and there was no one left to speak for me.”

By the way, Niemoller spent seven years in Nazi concentration camps; so, I guess he knew what he was talking about.

Dont Comply Responds To Obama Gun Ban Speech
Published on Dec 6, 2015
The Don't Comply Crew responds with a resounding decry of "Come And Take It!" to Obama's speech outlining his plan to ban gun sales to all no-fly list members.

FROM NO-FLY LIST TO NO-BUY LIST: OBAMA'S PLAN TO TARGET YOUR GUNS
Published on Dec 10, 2015
Sub for more: http://nnn.is/the_new_media | Zerohedge writes: The faux “liberal” who holds the White House was at it once again Sunday night. As he’s accommodated to doing, he presented a radically undemocratic and unconstitutional practice as a common sense appeal to the American public to accept gun control. What I am referring to specifically is the following passage from last night’s speech:

To begin with, Congress should act to make sure no one on a no-fly list is able to buy a gun. What could possibly be the argument for allowing a terrorist suspect to buy a semi-automatic weapon? This is a matter of national security.

FACEBOOK CENSORSHIP: SHUTTING DOWN THOUSANDS OF TRUTHERS
ONLY POLITICALLY CORRECT WILL BE ALLOWED; OTHERS BANNED
Published on Nov 29, 2015
Here's the Link that goes with the post: http://b4in.info/en0A

ISLAMISTS: COLLABORATORS IN FASCISM WITH ISIS & LBGT FACTIONS~ABUSE OF WOMEN NOT CONFINED TO MUSLIM COUNTRIES; IT HAS SPREAD


Published on Dec 3, 2015
Freethought activist Maryam Namazie was speaking to students at Goldsmiths University and College about ‘Apostasy, blasphemy and free expression in the age of ISIS’ when some primitive Muslims interrupted and constantly heckled her. One even went and switched off the projector with her presentation in a desperate attempt to censor her.
Sources:
http://freethoughtblogs.com/maryamnam...
https://harrymatz.wordpress.com/2015/...
http://www.londonstudent.coop/death-t...
http://www.secularism.org.uk/news/201...

categorically condemn the vile harassment of our ISOC members
https://www.facebook.com/goldsmiths.b... 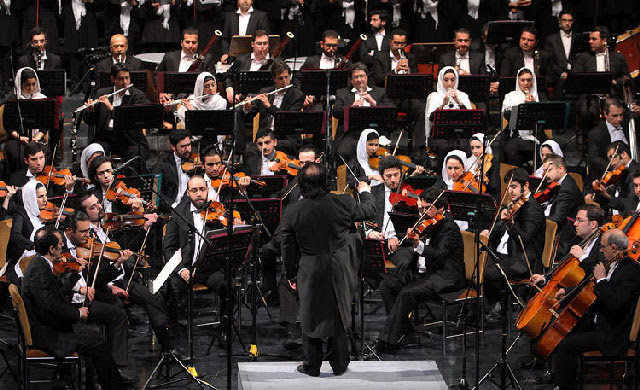 Tehran Symphony Orchestra Leaves Stage Rather Than Bow to Demand