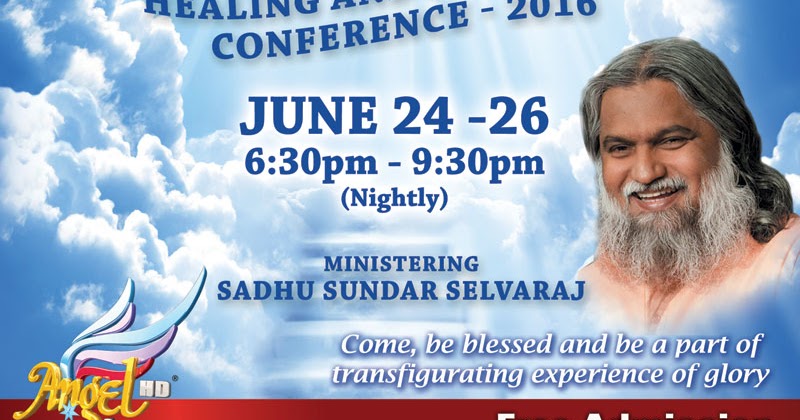 INDIAN HINDU GURU THE LATEST RAGE
AMONG CHARISMATIC "CHRISTIANS"~
CONSIDERED A "CHRISTIAN" PROPHET
AND/OR APOSTLE TO DOMINIONISTS
http://jesusministries.org/
SEE: http://pulpitandpen.org/2017/10/26/indian-guru-latest-rage-among-charismatic-christians/;
Selvaraj has made numerous end times or doomsday prophecies, especially those relating to natural disasters or pestilence, that have reportedly come to pass.
Like all charismatic prophecies, his have only come in the vaguest of terms, and if fulfilled he is heralded as a prophet, and if unfulfilled he is credited with turning the people to repentance and turning back God’s wrath.
Selvaraj is also a necromancer, and claims that Old Testament prophets are actually prophesying through him. He has done this, in particular, with the prophet, Joel. In fact, Selvaraj has claimed that God’s Old Testament Saints will come back down to Earth to help with natural disaster recovery efforts (link, timestamp 10:14).
Here’s a video of Selvaraj talking about his own Heaven tourism in which he appeared at a heavenly council with none other than…Donald Trump.
So, you can see exactly what this guy’s deal is. He supposedly hears directly from God. He’s seen God. He’s seen Heaven; he’s been there. He speaks to the Old Testament prophets and they speak with him and through him. And, he looks like an Indian guru, so Westerners think he must be especially attuned to the supernatural.
Selvaraj will be promoted on Jim Bakker’s survival food infomercial on December 4.

2 CORINTHIANS 6:14: "Be ye not unequally yoked together with unbelievers: for what fellowship hath righteousness with unrighteousness? And what communion hath light with darkness?"
THE GREAT DECEPTION:
UNITY IN APOSTASY
Kairos 2017 and the Mother of Harlots,
THE CATHOLIC CHURCH
Organized by Vatican special envoy Matteo Calisi ("United in Christ"), in collusion with Mike Bickle's IHOP.KC and by John Arnott's "Catch the Fire". This ecumenical event is a major milestone on the road back to Rome - The apostasy that is uniting many aberrant streams of Christianity in the one-world religion predicted in the book of Revelation is happening before our eyes. Wake up - the church is on fire!
See Also: https://emergentwatch.com/2017/10/19/...
CHARISMATICS & CATHOLICS UNITE
OCTOBER 24-26, 2017
SEE: http://pulpitandpen.org/2017/10/23/charismatics-and-catholics-to-unite-october-24-26/;
Since Vatican II in 1959, the Harlot of Rome has been trying to get Christians to come back under her skirt. The bawdy fornicatress of the Roman Catholic church, having tried to eliminate authentic Christianity with oppression and bloodshed, turned to a devilish, palms-up approach of coaxing back into her fold those who she once called (and still does) anathema. The only success the antichrist courtesan has typically had, has been those liberal, inerrancy-denying denominations in one way or another affiliated with the World Council of Churches. Until very recently, American evangelicals have not been drawn by the sinister siren’s lascivious call. The exception to this has been America’s charismatics, who divorced from Sola Scriptura and entranced by claims of extra-scriptural revelation, find the mother madam’s iniquitous brothel a place of seductive comfort rather than sacrilege.
Beginning with the Catholic Charismatic Renewal in 1967, Rome’s religion has increasingly reached out to the more superstitious and mystical with claims of her own charismatic power. Obviously, this came with applause from those engulfed in the heretical riptide of the First Wave and Second Wave of the charismatic movement in America. Charismatic evangelicals in the West were eager to adopt Roman Catholics in an ecumenical embrace on the grounds of their shared charismatic sentiments. Since that time, the merger of Charismaticism and Roman Catholicism has become all but complete. Nothing demonstrates this better than the latest attempt to merge American Charismaticism and Roman Catholicism than the Kairos 2017 event that will be held in Kansas City from October 24-26.
The “International Meeting of the Kairos” was invented by the Roman Catholic church as a part of it’s “Great Jubilee” in the year 2000. The goal of the ecumenical organization was to – very explicitly – merge together both Rome and charismatics.

The meeting of Kairos cannot be considered a simple ecumenical event among many, but it should be considered a new ecumenical Pentecost.  Bari has been called an ecumenical city par excellence by the testimony of Bishop Nicholas of Myra.  Because of the presence of the Basilica dedicated to Nicholas, Bari is considered a Holy City of the Churches of Eastern Europe. It has for centuries been a destination of pilgrimage by the faithful, especially from the Orthodox and Eastern Catholic Churches and, more recently, by the Christian Communities of the Reformation and the Anglican family, all seeking to restore Christian unity…The spiritual ecumenism indicated by the Second Vatican Council is accomplished through the experience of a strong presence of the Holy Spirit, which is manifested in ever new and extraordinary ways in the starting of the prophetic mission.  Participation in the meeting of Kairos representing various Churches and Christian Communities is one of the concrete gestures of the unity in the diversity, which testifies to the ecumenical journey undertaken with the universal Church for the realization of the desires of the heart Jesus “that all may be one so that the world may believe.”

This year’s Kairos conference, there will be a whole gaggle of false teachers who will be doing the blasphemy truffle shuffle in a virtual conga line of charismatic chicanery.  The speakers-list is like a roll-call for infamous heretics.

Speakers will include Kenneth Copeland, Mike Bickel (of Kansas City IHOP), Lou Engle (NAR Apostle), Gordon Robertson (son of Pat Robertson), Billy Wilson (of Oral Roberts University), and a whole hive of Roman Catholic officials and Eastern Orthodox idolaters.
As you can see below, from the Kairos website, the organization has a deliberately ecumenical design.

To watch the inanity live, you can click this link.
In the meantime, the rest of us Protestants will be over here….protesting and stuff.
______________________________________________________
Kenneth Copeland personally invites you to Kairos 2017; Avoids "Reformation", Calls it a "Protestors" split
from Catholic Church
CONDEMNS & REPUDIATES SEPARATION FROM ROMANISM; PROMOTES ECUMENISM; DISTORTS RECENT CATHOLIC STATEMENTS ABOUT
"WORKS" (FOLLOWING) SALVATION
PRAISES VISIT TO VATICAN
Lou Engle Invites You to Kairos 2017
The Great Deception Behind the Kairos 2017 Ecumenical Event in Kansas City
The Kairos 2017 Ecumenical Event in Kansas City is portrayed as a pivotal event in history where Catholic, Protestant, and Orthodox Leaders set aside their differences to reconcile 500 years of Forgiveness. It is in fact nothing other than the ongoing attempts to form an antichrist universal religion that denies Jesus Christ as Lord and Saviour and the only way by which we can be saved. It is in fact designed to counter the Protestant Reformation started by Martin Luther, and forms part of the ongoing onslaught on true Christianity by the Babylonian Roman Catholic Mystery Religion known as the Roman Catholic Church. Here are some important resources that act as reference material for this video: Pope Francis Calls for Dialogue Between the Worlds Religions http://propheticalert.net/pope-franci... The Stained Glass Curtain Deception: Why Evangelicals who partner with the Roman Catholic Church are in Rebellion against God http://www.propheticalert.net/wp-cont... Is The Roman Catholic Church Christian? https://youtu.be/a3Gop2nFS58 The Tsunami of Mystical Deception in the Church https://www.youtube.com/watch?v=wCueu... Beware of those who want to preach another gospel https://youtu.be/bYeNDU9e5gI

RUSSELL MOORE, SOUTHERN BAPTIST ERLC, ISSUES STATEMENT OPPOSING WHITE LIVES MATTER,
BUT NO REBUKE FOR BLACK LIVES MATTER
SEE: http://pulpitandpen.org/2017/10/27/russell-moore-erlc-issue-statement-opposing-white-lives-matter-but-no-rebuke-for-black-lives-matter/;
Russell Moore and the ERLC have never issued any statement against the racist, Marxist, pro-homosexual group, Black Lives Matter.  In fact, as the leftist group torched dumpsters, vandalized property and terrorized cities, Moore and the bleeding-heart left of the evangelical industrial complex oozed sympathy for the group.  As the group ramped up its protests, Russell Moore said, “If it seems that your church ignored the shootings of Alton Sterling and Philando Castile, then it may well be that the struggles of black lives are invisible to your people.”
Black Lives Matter told America to speak up for supposed systemic injustice and Russell Moore asked, “How loud?”
Black Lives Matter is an international organization advocating against violence done toward blacks by non-blacks (they’ve been virtually silent on black-on-black violence, which constitues 93% of homicides in the black community).  The movement grew out of a #blacklivesmatter hashtag during the controversy surrounding George Zimmerman’s legal self-defense shooting while being assaulted by Trayvon Martin.  The organization then organized riotous behavior surrounding the deaths of Michael Brown at the hands of a police officer, whom he was brutally attacking, and Eric Garner in New York, who died of a heart attack while resisting arrest.  Their protests usually result in violence, destruction of property or vandalism, illegal shutting down of streets and interstate traffic, and generalized mayhem.
The lead founder of Black Lives Matter is Alicia Garza, who reveres a Marxist revolutionary, black panther, cop-killer and conspirator with the Weather Underground and the Black Liberation Army.  A secondary founder, Pattrise Cullors, advocates for a nationwide vast reduction in police department budgets, believing that law enforcement is the chief problem in race relations. A third founder, Opal Tometi, is a “black feminist writer” who equates police actions with Jim Crow lynchings (source link).
Black Lives Matter is essentially a Marxist-driven band of racists who incite violence and property destruction in order to demonize police and defend violent criminals.  To date, Russell Moore has not criticized the Black Lives Matter movement.  However, today he signed a statement denouncing a “White Lives Matter” rally in Tennessee.  The statement read…


This weekend, white nationalists will descend on Tennessee, in both Shelbyville and Murfreesboro, for a “White Lives Matter” rally.  As Christian leaders in Tennessee, we declare ourselves in resolute opposition to this expression of racism and white supremacy.

The fact is this: It is impossible to denounce White Lives Matter without simultaneously denouncing Black Lives Matter, which Russell Moore has all but endorsed by his years of silence.  Both groups have exactly the same problem, and that is looking at culture and ethics through the lens of race, by which they prioritize themselves above others.
It is all the rage for limp-wristed evangelical debutants like Russell Moore to signal their virtue by denouncing the supposed racism of the alt-right, but they remain echoingly silent in opposition to the just-as-clear racism of the Marxist left.  There is not a speck of bravery in the statement by Russell Moore and the ERLC.  There is not a hint of intellectual consistency or ethical honesty in the statement by Russell Moore and the ERLC.  This is political correctness on parade, under the guise of pandering and convenient virtue.
It’s a sham.