POPE IN PHILADELPHIA~A WAVE OF DEPRAVITY SURGES TO AND FROM PAPAL IDOLATRY~CATHOLICISM: STORING UP WRATH FOR THE DAY OF WRATH

2 Timothy 3:1-7-"This know also, that in the last days perilous times shall come. For men shall be lovers of their own selves, covetous, boasters, proud, blasphemers, disobedient to parents, unthankful, unholy, without natural affection, truce breakers, false accusers, incontinent, fierce, despisers of those that are good, traitors, heady, high minded, lovers of pleasures more than lovers of God; having a form of godliness, but denying the power thereof: from such turn away. For of this sort are they which creep into houses, and lead captive silly women laden with sins, led away with divers lusts, ever learning, and never able to come to the knowledge of the truth." 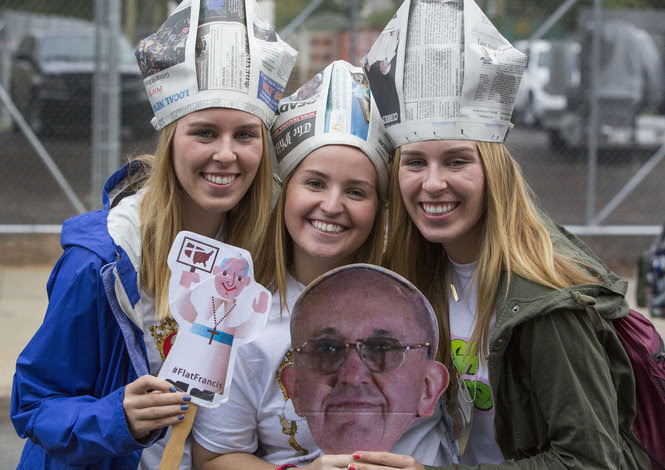 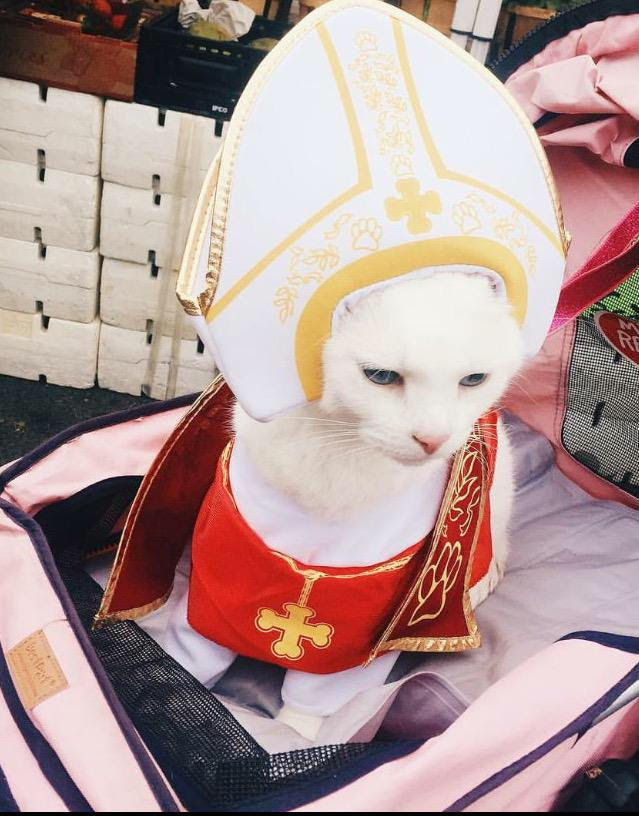 WAVE OF DEPRAVITY FOR POPE FRANCIS;
ROMAN CATHOLICISM: STORING UP WRATH FOR THE DAY OF WRATH
TONY MIANO & A TEAM OF STREET EVANGELISTS ENCOUNTER HARD HEARTS IN PHILADELPHIA FOR THE POPE FEST
Published on Oct 2, 2015
Part Mardis Gras; part religious observance; part zombie walk. The last day of Pope Francis' (Jorge's) visit to Philadelphia saw a crescendo of idolatry and blasphemy. After the million-person out door trampling under foot the blood of Christ (The Mass), the people washed over the intersection of Broad Street and Walnut Street like a wave of depravity.

Jeff Rose, founder of JeremiahCry Ministries and organizer of the "No Hope in the Pope" outreach, preached this powerful open-air message, during which he called the masses to repent of their sin. He warned them if they did not heed and obey the gospel they would continue to store up wrath for the day of wrath.

POPE-ADELPHIA
FOR SOUTH PHILADELPHIA CATHOLICS,
POPE, FOOTBALL, BOOZE, & CARNAL CARNIVAL
ARE ALL COMPATIBLE!
AND THEY, AND MANY APOSTATE PROTESTANT 'EVANGELICALS', BELIEVE THEY ARE CHRISTIANS?
POPE FRANCIS IS "GOOD FOR THE ECONOMY", AND
"WE ALL DRINK" & DRESS IN CLERICAL ATTIRE FOR FUN TOO!

Posted by John at 2:31 PM Links to this post

GOOGLE'S RAY KURZWEIL: BY 2030, WE WILL BE LIKE GOD BY NANOBOTS IN OUR BRAINS KTSIMAGE VIA GETTY IMAGESAn artistic rendering of a neural network with an artificial connection in a nanotechnology concept.

Ray Kurzweil: In The 2030s, Nanobots In Our Brains Will Make Us 'Godlike'

SEE: http://www.huffingtonpost.com/entry/ray-kurzweil-nanobots-brain-godlike_560555a0e4b0af3706dbe1e2?ncid=txtlnkusaolp00000592; republished below in full unedited for informational, educational, and research purposes; videos and pictures from original article omitted:

RELIGION & POLITICS DO MIX AFTER ALL, UNDER THE "LAW OF ATTRACTION"

THE ART OF THE DEAL; OR, IF YOU BUILD IT THEY WILL COME!

RELIGION & POLITICS WILL BENEFIT FROM AN INFUSION OF CASH; PLUS A TOP OF THE LINE JET PLANE FOR EACH, PLEASE!
SHOWMEN MEET TO DISCUSS COMMONALITIES

PAULA WHITE: I GOT TO HOLD THE ARM OF THE ANOINTED ONE!

THE NEXT "PASTOR IN CHIEF" AFTER OBAMA

WE WANT A HIGH RISE TOWER BOARD ROOM TOO, GOD!
CHANGE THAT TO THE TOWER, THE JET, & THE BOARD ROOM, BECAUSE YOU WANT US TO BE BLESSED RIGHT NOW!

YOU SHOULD KNOW WHO THIS IS BY NOW!
BUT SHE CAN'T TAKE HER WEALTH WITH HER WHEN SHE DIES

IS THIS JAN CROUCH OF TBN??? HER CLAIM HAS LONG EXPIRED

THE TWO PROPHETS SHAKE ON IT: DAVID JEREMIAH & TRUMP 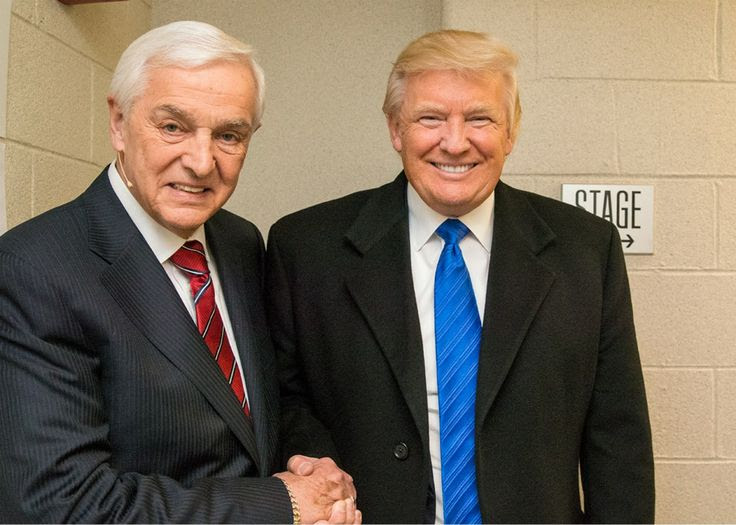 BY HEATHER CLARK
SEE: http://christiannews.net/2015/09/30/video-shows-prosperity-preachers-kenneth-copeland-paula-white-laying-hands-on-donald-trump-for-presidency/; republished below in full unedited for informational, educational, and research purposes:

NEW YORK — What do Kenneth Copeland, Paula White, Jan Crouch, Dr. David Jeremiah and Robert Jeffress all have in common? A video has surfaced online showing the men and women, along with others, laying hands on Republican presidential candidate Donald Trump this week and praying for his potential presidency.
According to reports, an estimated three dozen spiritual leaders from across America met with Trump for over two hours at his Trump Towers on Monday, providing advice. Those in attendance included a number of nationally-recognized televangelists and prosperity preachers, including the aforementioned Copeland, Crouch and White, as well as TBN regulars Jentezen Franklin, Steve Munsey and Clarence McClendon.
The meeting concluded as many of those gathered laid hands on Trump and prayed for God’s wisdom and favor on the candidate—the last few moments of which was captured on camera. He was flanked by White on one side and Jeffress on the other.
“Father, we just secure him right now by the blood of Jesus. We thank you that no weapon formed against him will be able to prosper and any tongue that rises against him will be condemned according to the word of God,” White, who leads New Destiny Christian Center in Florida, prayed as she touched his arm. “Even as we lay hands on him right now, let Your hand be laid upon him. Let him have a greater encounter with You, a greater encounter with the spirit of God.”
“All the days of his life, let him live well,” she continued. “I secure him. I secure his children. I secure his calling and his mantle.”
Kenneth Copeland, who leads Kenneth Copeland Ministries in Texas and has come under criticism for his health and wealth teaching, asked for wisdom for the candidate.
“[W]e ask you today to give this man your wisdom, boldly. Make sure and certain that he hears You. Manifest Yourself to him,” he prayed. “And we thank You and praise You for a bold man, a strong man and an obedient man.”
Following Copeland, Kirt Schneider of Jews for Jesus laid his hand on Trump’s forehead and prayed the Abrahamic blessing over the Republican presidential candidate.
“Donald Trump, the Lord bless you and keep you. The Lord make his face shine on you and be gracious to you. The Lord lift you up with His countenance and give you His peace,” he declared.
David Jeremiah, pastor of Shadow Mountain Community Church in El Cajon, California also participated in the prayers, asking that the next president “will help us economically and spiritually, and in every way.”
“So today we pray for Donald Trump,” he said, as the others in the room joined in agreement. “We pray for his family. We pray for his associates. We pray that what he has heard today from those who have spoken into his life, he will consider.”
“Lord, whatever it is that You are going to do to bring around him the right people as he moves forward in this campaign, we ask you to give him direction and give him hope,” Jeremiah continued. “And Lord, thank you for allowing us to be here for this special moment. Perhaps we’ll look back on this day and remember that we stood together and we prayed for the next president of the United States.”
But not everyone is happy to hear about the meeting. Russell Moore, the president of the Ethics and Religious Liberty Commission of the Southern Baptist Convention, said that he was concerned that out of all of Christianity, billionaire Trump seems to be attracted to prosperity preachers.
“The people that Trump has so far identified as his evangelical outreach are mostly prosperity gospel types, which are considered by mainstream evangelicals to be heretics,” he told Politico.
“Trump seems to be positioning himself as a secular version of the health-and-wealth televangelists,” Moore continued. “What Donald Trump is doing in terms of promises for the future is very similar to what’s going on among these prosperity gospel hawkers.”
PAULA WHITE LOOKING FOR A RICH HUSBAND AGAIN?
TRUMP & WHITE BOTH MARRIED THREE TIMES (TO OTHERS)
HOLD BIBLE, LAY HANDS ON, & PRAY THAT ALL THOSE $BILLIONS COME BACK TO AMERICA; AND, OH YES, CALL IN THE PRESS TO RECORD FOR THE CAMPAIGN & POSTERITY!
AND IF THE ILLEGAL IMMIGRANTS REFUSE TO LEAVE,
WE CAN ALWAYS TAP THEM FOR TITHES & OFFERINGS

PAULA WHITE HAD TRUMP FOR A GUEST IN 2006:
SEE:
http://www.apostasyalert.org/REFLECTIONS/Paula_White_Blush.htm
EXCERPT:
Introducing her guests, she said, "If you want to change the way you live, change your thinking. I want them to bring their wisdom to you today, give people tools to really transform their lives." And then the camera panned over to two men, co-authors of the book,"Why We Want You to be Rich": Robert Kiyosaki and Donald Trump.
Yes – the Donald. Donald Trump -- to give you the wisdom of the world to transform your life! I mean, who wouldn’t want a life like his? On his fourth marriage – all to beautiful (at least by outer appearance) women who mothered his children. The Donald – living in the lap of luxury, flying around in his own private jet, hosting his own reality program, The Apprentice, and here on this "Christian" program to share his worldly wisdom with all of us: how to become rich – how to become a billionaire.
"The only limitations are the ones we put on ourselves," Paula bubbled. "If we change our way of thinking, change our way of life – the bible all about empowerment."
She was speaking Trump’s language. He told of athletes who make bad financial deals for a lack of knowledge and end up bankrupt, while making their managers rich. Trump lamented, "If they knew what you preach, Paula, they would never be in the condition they’re in today."

SEE: http://www.thedailybeast.com/articles/2015/08/30/televangelists-and-trump-a-match-made-in-heaven.html
EXCERPTS: Trump palling around the televangelist world of get-rich-quick promises, multiple marriages, and questionable coiffures is, well, perfect. His decision to host these leaders at Trump Tower in Manhattan suggests he may see faith the way he sees other endeavors: as a way to lure big audiences with glitzy promises that are less than reality-based. Much like his outreach to the more mainstream evangelical community, he’s been connected with the televangelist set for quite a while.
Trump and White have been friends for years, which makes sense because they have a lot in common. In addition to having their own popular TV shows, they’re on their third marriage—Trump’s to former model Melania Trump, and White’s to the keyboardist for Journey.
Trump has been a guest on her programming numerous times, and they seem to be big fans of each other. He’s called her “a beautiful person, both inside and out,” and recommended that viewers read her book You’re All That: Understanding God’s Design For Your Life so they would “be ready for great success.” White has compared him to “a diamond that reveals a new facet each time it is turned in the light,” according to The Tampa Tribune.
______________________________________________

1 Timothy 2:5-"For there is one God, and one mediator between God and men, the man Christ Jesus" 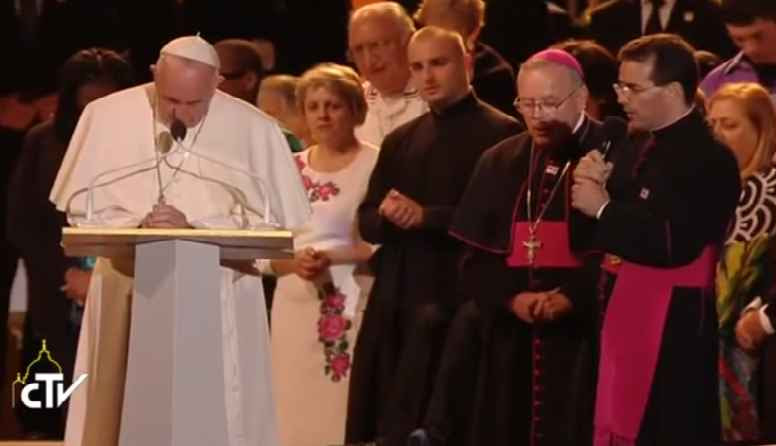 POPE FRANCIS LEADS PHILADELPHIA IN PRAYER TO UNBIBLICAL "INTERCESSORS"
BY HEATHER CLARK
SEE: http://christiannews.net/2015/09/28/pope-francis-leads-philadelphia-in-prayer-to-mary-and-joseph-to-protect-families/;
Posted by John at 11:30 AM Links to this post