CATHOLICISM VIOLENTLY ASSAULTS SCRIPTURE ALONE BECAUSE THE BIBLE EXPOSES ROME'S DISTORTED TRADITIONS
A free written transcript of this message is available at https://media-cloud.sermonaudio.com/t.... Free written transcripts of this message are available in 20 languages at https://www.sermonaudio.com/sermoninf.... Sola Scriptura is the teaching that the Bible is the final authority in all things it addresses, but this does not mean we ignore councils, various traditions, or church history. It means that in everything the Bible addresses, Scripture is the final authority. So when we are asked how the early church practiced Sola Scriptura before the Bible was completed, we say that they judged spiritual truths the same way Protestants do today--by Scripture. In the case of those before the completion of the New Testament, they used the Old Testament Scriptures. This practice is exactly what we find in the book of Acts. Larry Wessels, director of Christian Answers of Austin, Texas/ Christian Debater (YouTube channel CANSWERSTV at https://www.youtube.com/user/CAnswersTV; see our other 186 videos on Romanism at http://www.youtube.com/playlist?list=... websites: http://www.BIBLEQUERY.ORG, http://www.HISTORYCART.COM & https://www.muslimhope.com/ ) presents part 3 of the "Former Catholics for Christ Conference in Springfield, Illinois - May 17-19, 2019" by former Catholic Cecil Andrews, director of Take Heed Ministries (http://www.takeheed.info/ , 29 Edengrove Park, Ballynahinch, BT24 8AZ, Northern Ireland, Telephone/Fax 028 9756 5511, email: takeheed@aol.com) on the subject of "Scripture Alone - Sola Scriptura." Acts 17:1-11, "Now when they had traveled through Amphipolis and Apollonia, they came to Thessalonica, where there was a synagogue of the Jews. 2 And according to Paul’s custom, he went to them, and for three Sabbaths reasoned with them from the Scriptures, 3 explaining and giving evidence that the Christ had to suffer and rise again from the dead, and saying, “This Jesus whom I am proclaiming to you is the Christ.” 4 And some of them were persuaded and joined Paul and Silas, along with a large number of the God-fearing Greeks and a number of the leading women. 5 But the Jews, becoming jealous and taking along some wicked men from the market place, formed a mob and set the city in an uproar; and attacking the house of Jason, they were seeking to bring them out to the people. 6 When they did not find them, they began dragging Jason and some brethren before the city authorities, shouting, “These men who have upset the world have come here also; 7 and Jason has welcomed them, and they all act contrary to the decrees of Caesar, saying that there is another king, Jesus.” 8 They stirred up the crowd and the city authorities who heard these things. 9 And when they had received a pledge from Jason and the others, they released them. 10 The brethren immediately sent Paul and Silas away by night to Berea, and when they arrived, they went into the synagogue of the Jews. 11 "Now these were more noble-minded than those in Thessalonica, for they received the word with great eagerness, examining the Scriptures daily to see whether these things were so." The context is that Paul and Silas had gone to a synagogue in Thessalonica, and he was reasoning "from the Scriptures" (v 2)--not from tradition--in order to establish who Christ was. Now, this is important since the New Testament had not yet been completed. Paul the apostle was using the Old Testament Scriptures to speak of Christ. In fact, he was so effective that "a large number of the God-fearing Greeks and a number of leading women" were persuaded (v. 4). So, this means that the Scriptures were used in the defense of the Christian faith to both Jews and Gentiles. There was no appeal to tradition of any sort. The text goes on to say that Paul and Silas went to Berea and entered the synagogue of the Jews (v. 10), and these Jews were called noble-minded because they examined the Scriptures to see if what Paul was saying was true. They did not check tradition. They checked Scripture. We clearly see that the concept of Sola Scriptura is affirmed in Scripture. The Jews used Scripture--not tradition--to validate what Paul the apostle was teaching--and in Acts 17:11 they are called noble-minded for doing so. This means that the idea of going to the word of God to judge spiritual truth was affirmed by the apostle Luke who wrote the book of Acts. Therefore, it makes sense to say that the early church did the same thing. They looked to the existing Scriptures to verify what was spiritually true since they would have followed the apostles' teachings. 1 Corinthians 4:6, "Now these things, brethren, I have figuratively applied to myself and Apollos for your sakes, so that in us you may learn not to exceed what is written, so that no one of you will become arrogant in behalf of one against the other." Protestants reject: veneration of Mary, penance, indulgence, purgatory, prayer to saints, et. al.
Posted by John at 2:41 PM Links to this post


Even though only a small percentage Hong Kong’s citizens profess to be Christian, numerous online videos have captured crowds singing “Sing Hallelujah to the Lord” on the streets in recent months among protests against a bill that some fear would extradite residents to Communist China. The protests — and singing — have continued as the calls have broadened into a wider demand for democracy in the region. 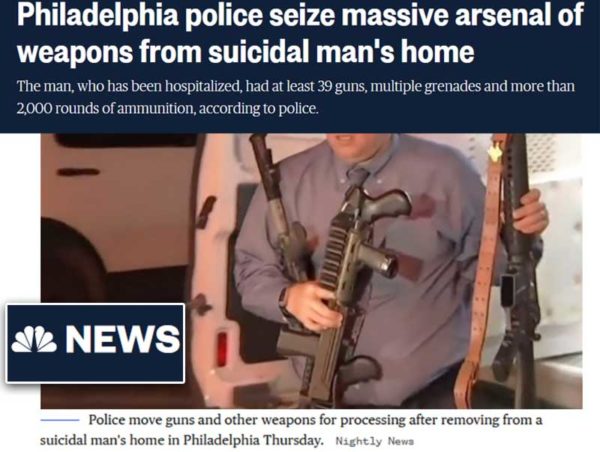 PA MAN HAS 39 FIREARMS SEIZED~
NBC CALLS IT A "MASSIVE ARSENAL"
BY JOHN CRUMP
SEE: https://www.ammoland.com/2019/09/pa-man-has-39-firearms-seized-nbc-call-it-a-massive-arsenal/;
Posted by John at 1:22 PM Links to this post