FULL REMARKS OF HEATHER HEYER'S MOTHER AT CHARLOTTESVILLE MEMORIAL SERVICE
"YOU KILLED MY CHILD TO SHUT HER UP; BUT GUESS WHAT, YOU JUST MAGNIFIED HER"
Published on Aug 17, 2017
https://democracynow.org - A memorial service was held today in Charlottesville to remember Heather Heyer, who died Saturday after she was run down by a neo-Nazi named James Alex Fields. Heyer had repeatedly championed civil rights issues on social media. Her Facebook cover read, "If you’re not outraged, you’re not paying attention." Speakers at today’s memorial included Heather’s mother, Susan Bro.

"GHETTO-IZATION"
MUSLIM NO GO ZONES TAKING OVER EUROPE
Published on Aug 15, 2017
Raheem Kassam, UK Editor for Breitbart News, joins Owen Shroyer live via Skype to talk about his new book "No Go Zones", a chronicle of the expansion of Sharia Law suburbs and cities across Europe.

INSIDE A "NO GO ZONE" IN MALMO, SWEDEN
Published on Feb 25, 2017
SUPPORT JOURNALISM. DONATE AT PATREON.COM/TIMCAST

First it is important to know that there aren't any official "no go zones." This is a term used colloquially by many people but not most and it certainly isn't official.

Police refer to many areas as "Problem areas" and Rosengard is one of them. Today we visited Rosengard in Malmo, Sweden with Nils Karlsson who is a local politician and stayed at the home of Johann, a local in Rosengard.

While we learned a lot we certainly weren't robbed or attacked while walking through the neighborhood, even in one of the most notorious locations, Ramels Vag.

Donald Trump shined a light on the city of Malmo, so we have decided to investigate. Subscribe to follow our journey.

HOMESCHOOLERS SAVE TAXPAYERS $22 BILLION PER YEAR

HOMESCHOOLERS SAVE TAXPAYERS
$22 BILLION PER YEAR
Published on Aug 16, 2017
Dr. Duke Pesta and Alex Newman discuss homeschoolers and the $22 billion they are saving American taxpayers every year.
Full Article: http://bit.ly/2fM6Zy3

From FreedomProject Media:
Taxpayers across America, struggling under the burden of crushing local property taxes in addition to state and federal taxes, should thank a homeschooling family today. According to recent estimates, homeschool families are saving taxpayers across America some $22 billion each year, if not more.
The estimated savings to the public treasury were compiled by researchers by examining the number of homeschooled children in a state, where such records exist, and the average cost per government-schooled student.
In Wisconsin, where FreedomProject Academy has its headquarters, homeschool families save taxpayers well over $200 million per year. In California, it's almost $2 billion, while in New York and Texas it's $1.7 billion and $1.2 billion, respectively, according to data published by Intellectual Takeout.
In short, the savings are huge. And they are getting larger each year, as government spending on so-called “education” balloons, and the number of homeschoolers leaving the system mushrooms.
To read the rest of the article, click here.

TRUMP SLICES MAINSTREAM MEDIA TO PIECES
IN EPIC PRESS CONFERENCE
Published on Aug 16, 2017
The President reminds the fake news media that he's still not here to play around, and he most definitely won't be bullied by their games.

Posted by John at 9:23 AM Links to this post DOES CHARLOTTESVILLE MEAN CIVIL WAR IS IMMINENT?
APOSTATE AMERICAN CHURCHES USING
A PERVERSION OF ROMANS 13
JUST LIKE NAZI GERMANY
Published on Aug 16, 2017
Should you feel sad for people who are actively working to destroy the Republic? Maybe we should all just come together and keep comprising until we have no country left? You decide:
OUTSTANDING VIDEO PRESENTATION
BY THE PATRIOT NURSE
Patriot Nurse Biography
SEE: https://www.thepatriotnurse.com/pages/about-us

Patriot Nurse currently teaches her own brand of curriculum, focusing on Disaster Medical Preparedness for the layperson and healthcare provider alike. Her courses enjoy wide popularity.
In addition to her medical work, Patriot Nurse has trained with firearms instructors Paul Gomez, Rob Pincus (I.C.E. Training), Kyle Armstrong, Craig Douglas (Southnarc) and Reid Henrichs. She is an NRA Life Member and a fierce defender of the Second Amendment, women's self-defense and family protection issues.  Patriot Nurse is both a classically trained musician and a student of foreign languages. She enjoys speaking Hebrew, Spanish and Vietnamese.
Of her work, Patriot Nurse says the following:
"I take a very balanced approach to prepping that is decidedly reason-based. Many people, after prepping for some time, begin to realize their preps are covered in the food and weapons arenas, but the ‘band-aids’ area looks lean. Select individuals realize that medical preparedness is decidedly less glitzy, but it is integral to a well-rounded plan for thriving during times of difficulty. My work fills that void for the average person, equipping him with the knowledge and the skills to thrive in times of difficulty and disaster alike."
_______________________________________________________

Islam, the Left, and Approaching Civil War
Published on Feb 9, 2017

The 9th Circuit has decided that Muslim foreign nationals from countries harboring terrorists are more important that your right to life, liberty, and the pursuit of happiness
Website: http://www.thepatriotnurse.com
Facebook: https://www.facebook.com/ThePatriotNu...
Twitter: https://twitter.com/ThePatriotNurse
The Violent Unraveling of the LEFT: Get Ready!

Patriot Nurse Speaks out on Vaccines:
Medical Rape or Personal Choice?
SEE: http://healthimpactnews.com/2015/patriot-nurse-speaks-out-on-vaccines-medical-rape-or-personal-choice/;
Health Impact News Comments
She calls herself the “Patriot Nurse,” and she is a “prepper.” Here is what she writes about herself on her website:


I take a very balanced approach to prepping that is decidedly reason-based.  Many people, after prepping for some time, begin to realize their preps are covered in the food and weapons arenas, but the ‘band-aids’ area looks lean.  Select individuals realize that medical preparedness is decidedly less glitzy, but it is integral to a well-rounded plan for thriving during times of difficulty.  My work fills that void for the average person, equipping him with the knowledge and the skills to thrive in times of difficulty and disaster alike.

In her presentation on vaccines in this video, she covers four points:

She addresses the theory of “herd immunity” which claims that those refusing vaccines are affecting the health of the “whole herd” in society. Without addressing the supposed science behind such a claim, which is covered elsewhere in depth, she addresses the terminology used in this theory:


What is really on the line here in addressing human beings as “cattle?” We may be part of a group of people, part of a culture, but I am not a piece of livestock. I am a sovereign human being that has the ability to make choices. Regardless of the approval of the “scientific community,” I have the ability, as a free human being in this country, to be able to say what I want in my body and what I want in my child’s body.

The Patriot Nurse explains how the term “herd” very subtlety suggests that we are livestock that are “owned.” The question then is:


Who owns us, if not ourselves? Does the medical community own us? Does the State own us?

The medical community and doctors are not “feudal lords,” and we are not “peasants,” she says. We are free people.
She then addresses the concept: “For the better good of society.” She states that this excuse has been used by every major dictator for at least the past 100 years. This mindset can have very disastrous effects for both the individual and the entire society.


2. Protecting Those Who are Vulnerable and Cannot be Vaccinated

Next the Patriot Nurse deals with the argument that we need to protect those in society who cannot be vaccinated, such as those too young to receive certain vaccines.
Her question to those who argue this is:


Are we willing to threaten choice, are we willing to sacrifice choice, for a select group of individuals’ safety? There is always a trade-off between freedom and safety. If you’re really wanting a society to be better safeguarded and protected, defaulting to freedom of choice overall is your best guarantee to do it. Freedom of choice for the individual is the best guarantee of overall societal freedom and prosperity. Individuals have liberties and rights. Collective societies do not.

3. The Science Behind Vaccines is Settled

Those who believe this ask: why should parents be allowed to deny their children “life-saving” measures? The answer and check to that, says the Patriot Nurse, is “at what cost?”


Are we willing to allow the State or the medical establishment to form a tyrannical over-lordship that dictates whether or not a parent is allowed to do this, or do that, for their child?

She points out that people feed their children abysmal diets all day long, things that can be considered “deadly” long term. Parents make choices every day that affect their child’s health, but most of these choices are not mandated. If it is not the parent who has the right to decide what is best for the child, the whose right is it? The doctor? The State? Does one person not have a right to decide what goes into their body because 10 other people say they know better?


4. We are Seeing a Resurgence in “Vaccine Preventable Diseases”

Next, the Patriot Nurse deals with the objection that vaccine deniers are allowing “vaccine preventable diseases” to return and threaten the entire society. She states: 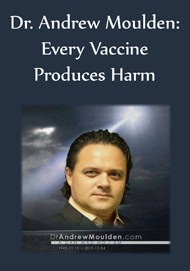 eBook – Available for immediate download.
Canadian physician Dr. Andrew Moulden provided clear scientific evidence to prove that every dose of vaccine given to a child or an adult produces harm. The truth that he uncovered was rejected by the conventional medical system and the pharmaceutical industry. Nevertheless, his warning and his message to America remains as a solid legacy of the man who stood up against big pharma and their program to vaccinate every person on the Earth.
Dr. Moulden died unexpectedly in November of 2013 at age 49.
Because of the strong opposition from big pharma concerning Dr. Moulden’s research, we became concerned that the name of this brilliant researcher and his life’s work had nearly been deleted from the internet. His reputation was being disparaged, and his message of warning and hope was being distorted and buried without a tombstone. This book summarizes his teaching and is a must-read for everyone who wants to learn the “other-side” of the vaccine debate that the mainstream media routinely censors.
_______________________________________________________

RUSH: We're Not That Far From A CIVIL WAR!

Posted by John at 8:36 AM Links to this post