AN APPEAL FOR ONE WORLD

"EMPOWERED TO IMPOSE SANCTIONS"
BUT WILL THE VATICAN'S WEALTH
GO TO THE POOR? UNLIKELY!

BY  Rebecca Terrell
SEE: http://www.thenewamerican.com/world-news/item/21092-pope-s-environmental-encyclical-calls-for-world-government; republished below in full unedited for informational, educational, and research purposes: 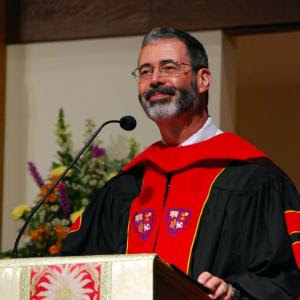 TONY CAMPOLO AND FORMER CHRISTIANITY TODAY EDITOR COME OUT IN SUPPORT OF HOMOSEXUAL CHRISTIANITY(Friday Church News Notes, June 26, 2015, www.wayoflife.orgfbns@wayoflife.org, 866-295-4143) - More “evangelicals” recently came out in support of the heresy of homosexual Christianity. Influential teacher and author Tony Campolo issued a news release saying, “I am finally ready to call for the full acceptance of Christian gay couples into the Church.” Though this has been framed by many as a major change of stance, Campolo has long been wishy-washy on the issue of homosexuality, and like the good emerging church leader he is, he is adept at the miracle of facing two ways. For many years he has stated that homosexuality is a birth condition and not a “volitional” matter. When I interviewed Campolo in 2008 at the New Baptist Covenant Celebration in Atlanta, he was wearing a rainbow scarf in support of homosexual rights. Campolo’s wife, Peggy, is a national leader of the Association of Welcoming and Affirming Baptists (AWAB), which urges Baptist congregations to receive homosexuals into full membership privileges. At the New Baptist Covenant Celebration, I interviewed an AWAB council member named Kathy Stayton who said that she rejects the first three chapters of Genesis as literal history, does not believe that marriage is a divinely-ordained institution or that homosexual acts, even outside of “committed relationships,” are sinful. The AWAB booth distributed an article by Peggy Campolo entitled “Some Answers to the Most Common Questions about God’s GLBT [gay, lesbian, bisexual, transgendered] Children” from the Summer 2000 edition of The InSpiriter. Agreeing with Campolo’s recent statement was David Neff, retired editor of Christianity Today, who said on Facebook, “God bless Tony Campolo. He is acting in good faith and is, I think, on the right track.” Neff told Christianity Today: “I think the ethically responsible thing for gay and lesbian Christians to do is to form lasting, covenanted partnerships. I also believe that the church should help them in those partnerships in the same way the church should fortify traditional marriages” (“Does Campolo Announcement Signal Move,”Christian Newswire, Jun. 12. 2015). (The current senior editor of Christianity Today, Mark Galli, quickly reaffirmed the magazine’s official stance against same-sex “marriage,” though in typical New Evangelical fashion, Galli also stated that they won’t condemn or distance themselves from those who differ.) Neff’s position is impossible to reconcile with two clear teachings of Scripture. First, any sexual relationship outside of holy matrimony is sinful and under God’s judgment (Heb. 13:4). Second, holy matrimony is restricted to a covenant between one man and one woman (Gen. 2:18-24). This was affirmed by the Lord Jesus in Matthew 19:4-6. “Marriage is honourable in all, and the bed undefiled: but whoremongers and adulterers God will judge” (Heb. 13:4). The issue of homosexuality is revealing the apostasy of a large number of “evangelicals.”
_______________________________________________________
SEE: http://christiannews.net/2015/06/13/former-christianity-today-editor-praises-tony-campolos-call-for-full-acceptance-of-homosexuals/;
Posted by John at 9:14 AM