SEE: http://www.gopusa.com/news/2015/01/16/outrage-cancels-dukes-plan-to-use-chapel-tower-for-muslim-call-to-prayer/;
EXCERPT:
""Duke remains committed to fostering an inclusive, tolerant and welcoming campus for all of its students," said Michael Schoenfeld, vice president for public affairs and government relations. "However, it was clear that what was conceived as an effort to unify was not having the intended effect."
Under the canceled plan, members of the school's Muslim Students Association would have recited the call lasting about three minutes from the bell tower. However, the plan drew the ire of evangelist Franklin Graham, the son of the Rev. Billy Graham, who urged Duke alumni to withhold support because of violence against Christians that he attributed to Muslims. He wrote on Facebook that the decision is playing out as "Christianity is being excluded from the public square."" 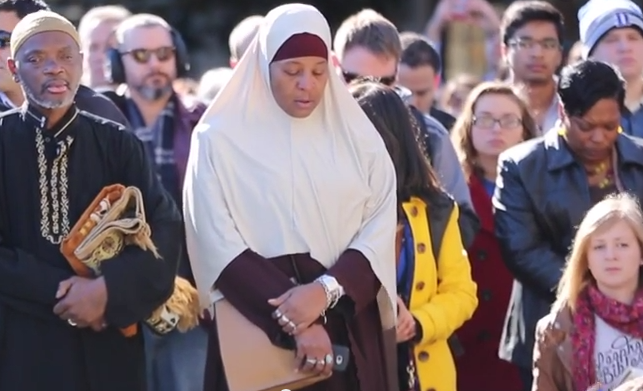 SEE: http://christiannews.net/2015/01/17/hundreds-rally-as-duke-muslims-broadcast-allah-is-great-chant-from-chapel-steps/;
EXCERPT:
DURHAM, N.C. – Hundreds of non-Muslims, including professing Christians, rallied outside of the Duke chapel on Friday as an estimated 100 Islamic students gathered for the call to prayer, which was broadcast from the university’s chapel steps.
Franklin Graham urged sponsors to withhold their funding until Duke ends the practice.
“As Christianity is being excluded from the public square and followers of Islam are raping, butchering, and beheading Christians, Jews, and anyone who doesn’t submit to their Sharia Islamic law, Duke is promoting this in the name of religious pluralism,” he wrote in a Facebook post on Wednesday. “I call on the donors and alumni to withhold their support from Duke until this policy is reversed.”
Duke University was also flooded with calls and emails from those nationwide that opposed the accommodation. On Thursday, the university announced that it had changed its plans.

MARCH FOR LIFE: ABORTION & THE CONSCIENCE OF AMERICA~NOT FOR CATHOLICS ONLY, DESPITE SILENCE FROM PROTESTANT PULPITS

"Abortion And The Conscience Of America"

Posted by John at 9:29 AM Links to this post