COURT DOCUMENTS SHOW MUELLER
INVOLVED IN 9/11 COVER UP
BY C. MITCHELL SHAW
SEE: https://www.thenewamerican.com/usnews/crime/item/28143-court-documents-show-mueller-involved-in-9-11-cover-up;
Mueller led the FBI from September 4, 2001 to September 4, 2013. One week after Mueller assumed his new job, 19 al-Qaeda terrorists hijacked four airliners, using three of them to destroy the Twin Towers of the World Trade Center in New York and severely damage the Pentagon in Washington, D.C. Nearly 3,000 people lost their lives that day and more than another 6,000 were injured, many of them later dying from their injuries.
Fifteen of the 9/11 terrorists were citizens of Saudi Arabia.
Over the years, evidence of Saudi involvement has continued to come to light. In September 2011 — 10 years after the attacks — Florida Bulldog, a non-profit watchdog news group based in Ft. Lauderdale, Florida, published an excellent piece of investigative journalism revealing the existence of the secret FBI investigation of a Saudi family living in Sarasota, Florida, with apparent ties to the 9/11 attackers.
Mueller — who was still at the helm of the FBI at the time the article was published — was involved in the “public release of deceptive official statements about” that secret investigation, according to a recent article from the Bulldog. As the recent article says:

The misleading statements, issued by FBI officials in Miami and Tampa, were made within days of a September 2011 Florida Bulldog story disclosing the existence of the investigation and reporting that Congress had been kept in the dark about it.
The statements sought to discredit the story, asserting that agents had found no connection between the Sarasota Saudi family and the 9/11 plot. In fact, the FBI’s own files contained at least three reports that said the opposite: that agents found “many connections” between the family and “individuals associated with the terrorist attacks on 9/11/2001.” The FBI released those reports later amid continuing Freedom of Information (FOI) litigation brought by Florida Bulldog.
The New American reached out to the Bulldog and spoke with Dan Christensen, the founder of the organization and writer of the article. Christensen is no newcomer to investigative journalism. After an award-winning career as an investigative reporter with the Miami Herald, he started the Bulldog in 2009 as a “nonprofit, independent and nonpartisan news organization that seeks to provide authoritative reporting in the public interest while upholding high standards of fairness and accuracy.”
When asked to what degree Mueller was responsible for the “deceptive statements” that “sought to discredit the story,” Christensen said, “We do not know for sure or completely that Mr. Mueller ordered the release of these deceptive statements.” Christensen added, “What we do know is that he was the FBI director at the time, we do know that this was called to his attention — that’s something we’ve just recently learned.” Not only was Mueller aware of the memo released by FBI agents, there is also a matter of “the timing,” Christensen said. “We do know that the timing of the memo of which he was apprised about that contained further inaccuracies was the same time — the same day — that at least one of these misleading statements was put out by the FBI in Tampa,” he told The New American.
As part of its efforts toward investigative journalism, the Bulldog engages in litigation — particularly filing Freedom of Information Act (FOIA) requests and court documents. The Bulldog website lists the documents referenced in its investigative reporting, and those documents are very revealing. For instance, the FBI — under the direction of Mueller — released a statement claiming, “At no time did the FBI develop evidence that connected the family members to any of the 9/11 hijackers as suggested in the article, and there was no connection found to the 9/11 plot.” However, the Bulldog website lists documents showing that this FBI statement is false.
As the Bulldog reported:

The same day the white paper was prepared for Director Mueller, Sept. 15, 2011, FBI Tampa Public Affairs Officer David Couvertier sent a similarly worded email to the Tampa Bay Times on behalf of Special Agent in Charge Steven E. Ibison: “At no time did the FBI develop evidence that connected the family members to any of the 9/11 hijackers as suggested in the article, and there was no connection found to the 9/11 plot.”
Florida Bulldog’s Miami attorney, Thomas Julin, filed court papers last week asserting a “red flag” has been raised in the case by disclosure of the FBI director’s involvement.
“That Mueller received a briefing about the Sarasota investigation suggests that the issues the Bulldog raised required the attention of the FBI’s highest authority,” Julin wrote.
The circumstances further suggest that Director Mueller approved the deception in which the FBI engaged.
Mueller did not respond to questions emailed to his office on Tuesday.
The two-page white paper, not attributed to any individual, is likewise interesting for what it did not tell Mueller. For example, it made no mention of the 2002 FBI reports stating that “many connections” were found between the al-Hijjis and the 9/11 hijackers. Nor did it discuss whether the FBI withheld the results of its Sarasota investigation from Congress, as former Florida Sen. Bob Graham, co-chair of Congress’ Joint Inquiry into 9/11, has said under oath.
So, Mueller — who is now the special counsel leading the probe into allegations of Trump/Russia collusion — was aware (as FBI Director) that the FBI made false statements denying that agents had found “many connections” between the Saudi family living in Sarasota and the 9/11 plot.
This information frankly does more than call Mueller's credibility into question; it leaves it in tatters. In more than eight months of digging, the Mueller probe has produced nothing — innuendo and insinuation notwithstanding — to show that President Trump or anyone in his campaign colluded with Russia to influence the 2016 election. And yet the former FBI director turned special counsel has continued (and is continuing) to lead what increasingly looks a witch-hunt, even as evidence of his own wrongdoing in the cover-up of Saudi connections to 9/11 come to light.
______________________________________________________

The criminal elite know they are being

House Intel Committee Votes To Release Secret FISA Memo To The Public
Reps Matt Gaetz, Andy Biggs, Lee Zeldin, Doug Lamborn, and Blake Farenthhold took to the house floor to declare their unwavering support for the release of the secret FISA memo that outlines civil rights abuses of the
Obama administration.
The House Will Vote To Release The Secret
FISA Memo And Infowars To Cover
State Of The Union Live
Trey Gowdy Talks About The Contents Of The Secret FISA Memo
Alex Jones presents a video clip from Chris Wallace's Sunday Fox News Program where Trey Gowdy openly talks about the contents of the secret FISA memo and advocates for its release.
Nunes Memo Causes Hysteria
Among Criminal Left
This entire quagmire is based on the assumption that Hillary wasn't supposed to lose. We are witnessing something far greater than a Nixonian world of corruption. Like a fat tick, the corrupt bureaucracies in this necessary evil known as government continue to feed on their host the American people. Release the memo. Jon Bowne reports.
Congressman Matt Gaetz joins Alex Jones live via Skype to discuss the secret FISA Memo and its undoubted effect coming to the Deep State criminals within the Clinton Crime Network.

McCabe Forced To Resign Because He Was Caught Running The Clinton Conspiracy Against Trump
Alex Jones breaks down why Andrew McCabe was forced to resign from his position as Director of the FBI after it became clear that he was running the Clinton post-presidential campaign against Trump.
CRITICAL MASS! McCabe’s Resignation Signals
A Massive Snowball Bringing Down
The Clinton Holdovers
Alex Jones lays out how Andrew McCabe's resignation from his position as Director of the FBI is a sign of a coming avalanche of corrupt people in our government being ousted from their holes.
BOMBSHELL! FBI Opens 3 Criminal Investigations Into The Clinton Crime Network
Alex Jones breaks down the three new investigations opened by the FBI looking into the crimes surrounding Former Secretary of State Hillary Clinton and the Clinton Foundation. 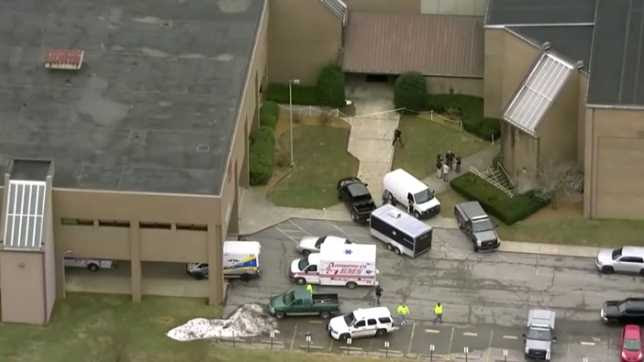 KENTUCKY GOVERNOR DECLARES DAY OF PRAYER IN AFTERMATH OF DEADLY SCHOOL SHOOTING
BY HEATHER CLARK
SEE: http://christiannews.net/2018/01/28/kentucky-governor-declares-day-of-prayer-in-aftermath-of-deadly-school-shooting/;
“We have seen evil and the face of evil as it has emerged, and the acts it has perpetrated on this community,” he said on Friday. “But I’ll tell you what’s stronger than evil: it’s good, and in the end, God wins. That’s a fact.”
Last Tuesday, 15-year-old sophomore Gabe Parker walked into Marshall County High School with a handgun and began firing, causing students to pour out of the building as they ran for their lives.
“You could see students dropping their bags and just start running, pushing past each other,” student Taylor Droke told WZTV. “Everyone in cars started turning around and driving away. Kids were jumping the fence around the school and running through the woods.”

By the time Parker was apprehended, 20 students were struck by gunfire, with one dying on the scene and another passing away at the hospital.
Gov. Bevin expressed deep sorrow over the tragedy, taking to both social media and a community event to address what he called the “cultural problem” of violence in America—more specifically, how forms of entertainment desensitize the viewer to bloodshed and murder.
“Look at our popular culture. Look at our movies. The violence [and] the disregard for the value of human life,” he said in an online video. “We have a culture of death of death in America. We can pretend we don’t. We can think that people can separate fact from fiction—from their lives from that which they see—but if they are immersed in it at every turn, in television, in movies, in music…”

Bevin urged parents to be attentive to what their children are watching, and encouraged youth to be careful about what they put in their eyes and ears. He also admonished film producers to realize the effect of the content of their movies on viewers.
“I know that we’re living in a day and age where [producers think] we need to shock people more than the last time or they won’t pay attention … The shock value maybe gets people to pay attention to something, puts eyes on something, and you can make a buck, but at what price?” Bevin asked. “It’s robbing us of the very fabric of our nation and it’s killing our young people.”
View the video in full below.
On Friday, Bevin signed a proclamation urging Kentucky residents to dedicate Sunday as a day of prayer for those affected by Tuesday’s shooting.
“I want to encourage this community to do what it’s doing, which is pray,” he stated at the Children’s Art Activities Center, according to the Courier Journal. “And I also want to encourage every single faith-based organization, church, house of worship, everyone this Sunday to pray for Marshall County.”
Among the churches that organized a special time of prayer or included prayer in their regular Sunday service was Greater Norris Chapel Baptist Church in Henderson, which held a dedicated prayer gathering this afternoon. Crossroads Church in Lexington also took time to discuss the matter this morning during its worship service. Impact Church, just 10 miles from the school, held a vigil this week as well.
Mark Stecher, pastor of Crossroads Church, told WKYT-TV that his church has been talking about being a good neighbor as no one can go it alone.
“It’s almost impossible to process the loss and pain without other people,” he stated. “If we are by ourselves, that isolation ends up freezing us and paralyzing us. So it’s the most healthy thing you can do to reach out and be great neighbors to each other.”