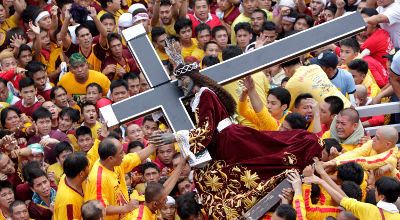 DEATHS AND INJURIES AMONG THOSE
TRYING TO TOUCH JESUS STATUE
SEE: http://www.wayoflife.org/friday_church_news/16_03.php
(Friday Church News Notes, January 16, 2015, www.wayoflife.org,fbns@wayoflife.org, 866-295-4143) - Two died and a thousand sought medical attention in the commotion surrounding the worship of a Roman Catholic statue of Jesus in the Philippines. Five million barefoot people performing penance flooded the streets as the statue was paraded through Manila preceding the visit of Pope Francis. The frenzied crowds want to touch the statue and rub cloths on it, in the pagan belief that they can experience the transfer of blessings and miracles from a dead idol. The popular 17th-century statue, which depicts a dark-complexioned, long-haired, haloed Jesus carrying a cross, was approved for veneration in 1650 by Pope Innocent X. In 1880, Pope Pius VII gave the statue a papal blessing and granted plenary indulgence for those who pray before it. It is brought out for public veneration three times a year: New Year’s Day, January 9, which is the statue’s Feast procession, and Good Friday. It is exactly the type of thing that Hindus do, hoping for blessing and good luck from their idols. Last year, a new routine was begun for the Black Nazarene. The Jesus statue stopped at the Basilica Minore de San Sebastián where a Mary statue (Our Lady of Mount Carmel) was brought out and held up by priests to “see” and “meet” the Black Nazarene. As the Jesus statue is transported from the basilica, the priests slowly turn the Mary statue so that it “watches” the Black Nazarene depart (Ricky Velasco, Doctor Love radio show, DZMM 630, Manila, Jan. 9, 2014). This is supposed to re-enact the mythical fourth Station of the Cross in Jerusalem, where Jesus allegedly met Mary on His way to the cross. Of course, no Catholic ritual would be complete without a reference to Mary. False Christianity is the devil’s masterpiece and has been a great stumbling block to many people. They see this type of thing and think, “Christianity is just another vain religion,” not knowing that this is not true Christianity. None of this is supported by Scripture, and the prophet Isaiah warned, “To the law and to the testimony: if they speak not according to this word, it is because there is no light in them” (Isa. 8:20).
_____________________________________________________

MANILA, Philippines – Two people are dead and hundreds more were injured as the result of massive throngs that followed and sought to press up against a centuries-old statue of Christ that was marched through the streets of Manila as part of an annual Roman Catholic celebration called the Feast of the Black Nazarene.
While the large number of those filling the streets could not be counted with surety, police in the Philippines estimate that at times more than half a million Filipinos participated in the procession, which takes place every Jan. 9th in the city. Roman Catholics carry white cloths and seek to touch the wooding carving of Jesus carrying the cross out of their belief that it possesses healing powers.
“The brand of religious devotion that we see in Filipino Catholicism is based on a very strong desire of the majority of our people for a more immediate and direct access to divine help or power,” Manuel Victor Sapitula, sociology professor at the University of the Philippines, told AFP. “That is why it is sought through physical touch, sound, bodily experience, or any combination of these.”
The statue, known as the Black Nazarene for the figure’s dark complexion, is believed to have been brought from Mexico to Manila in the 1600’s. It was carried aboard a ship, and although the vessel caught fire, it was not destroyed. For the past 200 years, millions have flooded the streets as the wooden carving is carried through Manila for its annual feast day.
Those who observe the occasion, which includes men, women and children alike, usually walk the streets barefoot as a gesture of reverence toward the statue. This year, cuts on the feet and legs were among the injuries reported as the large masses crowded to be near the graven image. Others reported difficulty breathing, dizziness and other ailments.
One 44-year-old man died after having a heart attack during the procession. He was transported to the hospital for the medical emergency, but was pronounced dead upon arrival. Another man was later found later in the day after the event was over and was believed to have been stampeded to death.
The Black Nazarene was carried over 6km to Quiapo Church, where it came to a rest. Various volunteers and government officials flanked the statue as it was carried along and sought to bring order to the massive masses that pressed to touch the carving or have one of the officials touch their cloth to the statue for them. According to the Business Insider, approximately 300 volunteers were given diapers as they could not leave their stations, and another 2,000 to those on traffic duty.
The Feast of the Black Nazarene occurred just days before enormous crowds are expected to gather for the arrival of Pope Francis on Jan. 15. Approximately 37,000 police and military personnel are being dispatched for the event.
As previously reported, the vast majority of Filipinos—approximately 80 percent—are Roman Catholic. An estimated 2.8 percent of the population profess to be evangelical Christians.
___________________________________________________
SEE OUR PREVIOUS POST FROM TWO YEARS AGO:
http://ratherexposethem.blogspot.com/2013/02/manilas-406-year-old-idol-black-nazarene.html