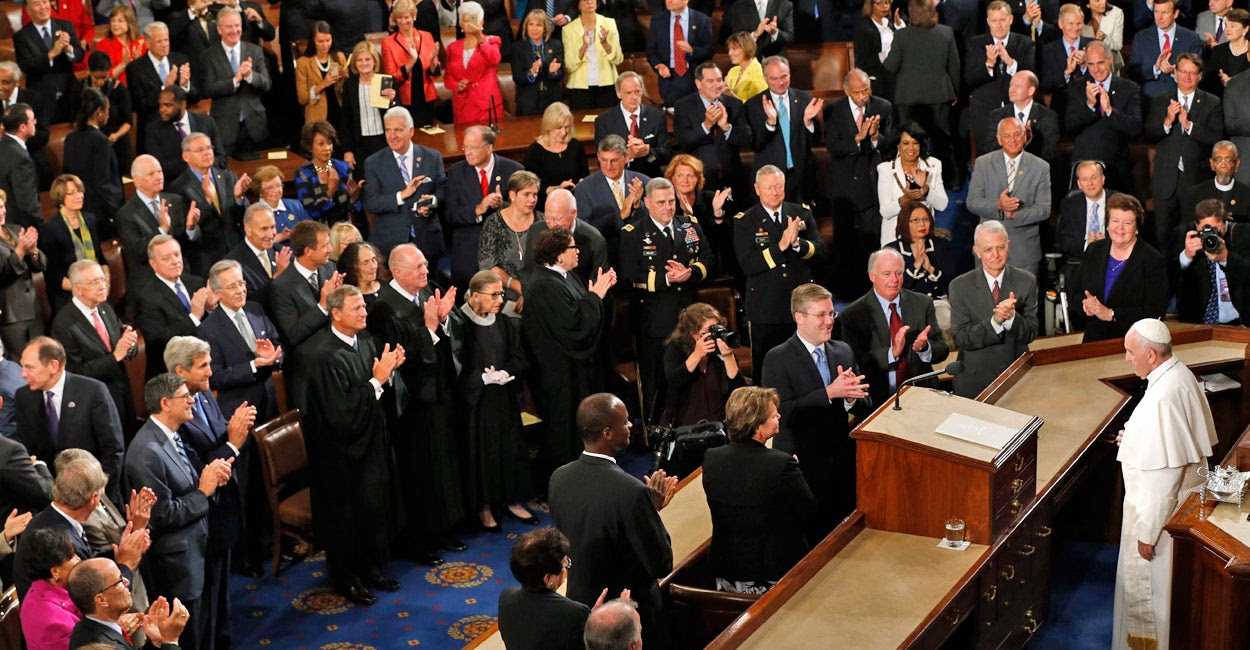 FULL TEXT OF POPE'S ADDRESS TO U.S. CONGRESS WITH OUR COMMENTARY BELOW
Please find below the full text of Pope Francis' Sept. 24 address to members of the United States Congress:

LTRP Note: On the morning of September 24th, Lighthouse Trails posted an article by Ray Yungen titled “Contemplative Spirituality – the Source of the Catholic Church’s Expansion”  “Coincidentally,” one hour later, Lighthouse Trails was contacted and told that the Catholic Church’s Jesuit Pope Francis  talked about Thomas Merton (using the term contemplative to describe him) when he addressed Congress. Shortly later, Lighthouse Trails received this letter to the editor below.
The fact that Pope Francis referred to Merton (and his “contemplative style”) when talking to Congress and our nation is probably one of the heaviest things we have encountered since beginning Lighthouse Trails 13 years ago. We have suspected but now believe that Pope Francis has the capability of orchestrating a one-world religion. As one Merton scholar explained: “The God [Merton] knew in prayer was the same experience that Buddhists describe in their enlightenment.”1 In other words, Merton found Buddhist enlightenment in contemplative prayer.2 Merton’s view that God was in every person is summed up in this statement:


During a conference on contemplative prayer, the question was put to Thomas Merton: “How can we best help people to attain union with God?” His answer was very clear: We must tell them that they are already united with God. “Contemplative prayer is nothing other than ‘coming into consciousness’ of what is already there.”3

This is panentheism Merton is describing above. We took the quote from one of Brennan Manning’s books. Remember the booklet we just released earlier this week about Beth Moore and her contemplative propensities where we quoted her saying that Brennan Manning’s contribution to “our generation of believers may be a gift without parallel.”4 But Manning resonates with Merton!  Please see what is happening here. It was no coincidence that we just released Ray Yungen’s booklet on Richard Foster and John Lanagan’s booklet on Beth Moore (both showing the interspiritual “fruit” of contemplative prayer), and then posting the article on the Catholic Church’s Expansion this morning. We did not know the pope was going to be exalting Thomas Merton today. Surely, God is trying to send out a warning. We just fear that few will hear it.
In Yungen’s booklet on Foster, he presents some new information about Merton that we never had before. It’s vital, especially now that the pope has used Merton as an example of who the American people are (please read an excerpt from Yungen’s booklet below the letter to the editor to better understand what we are trying to say).
Dear Lighthouse Trails:
I am writing to you today hoping to pass some information onto Ray Yungen.
Today, I was led by the Lord to watch Pope Francis’ speech to Congress, I was curious as to what “interesting” things he was going to have to say. As I was watching the speech I heard him mention “Thomas Merton” which caught me off guard. I remember Ray and Warren Smith talking about him and how much he has been influenced by the New Age Movement. In his speech, he mentioned how “Merton was above all a man of prayer, a thinker who challenged the certitudes of his time and opened new horizons for souls and for the Church. He was also a man of dialogue, a promoter of peace between people and religions.” He also said “Thomas Merton had the capacity for dialogue and openness to God” [contemplative]. He mentioned three other people in his speech, one of them being Dorothy Day [a radical feminist, social activist, and journalist], saying that these four people,4 including Thomas Merton, are “four representatives of the American people.”
After watching the speech, I felt I needed to pass this information onto Warren Smith, so I e-mailed him; I’m hoping he gets the e-mail. I really feel that this is just another connection of how the New Spirituality/Contemplative Prayer is invading the Body of Christ, and this nation!
After I e-mailed Warren, I was led to Lighthouse Trails Research website to try and see if there was any other contact information there. As I was there, I looked at the “blog” section page. To my absolute surprise, I saw an article written by Ray Yungen called “Contemplative Spirituality – the Source of the Catholic Church’s Expansion.” It was posted on the EXACT same day as the Pope speaking to Congress. And what is one of the things the Pope talks about in his speech to congress? Thomas Merton!
Here is the actual video of his speech at Congress:
http://youtu.be/4rKi6ctW46A
Here is the written transcript of the speech:
http://www.sunherald.com/2015/09/24/6431313/text-of-pope-francis-address-to.html
I hope that you will be able to pass this information onto Ray, and hopefully even Warren Smith as well! It’s just more information that can be used to connect the dots.
Endnotes:
Excerpt from Ray Yungen’s booklet, A Serious Look at Richard Foster’s “School” of Contemplative Prayer
Thomas Merton, a Catholic monk, is the most widely recognized of the modern-day contemplative writers. His influence is enormous in the contemplative field. Richard Foster quotes Merton over a dozen times in Celebration of Discipline and in other books as well, and many other evangelicals also quote Merton. The following entry from Merton’s published work, The Asian Journal of Thomas Merton (written during his last trip to Asia*) speaks volumes as to Merton’s spiritual sympathies:


We went looking first for Chatral Rimpoche [a Tibetan holy man] at his hermitage above Ghoom. . . . We were told he was at an ani gompa, a nunnery, down the road. . . . So off we went toward Bagdogra and with some difficulty found the tiny nunnery . . . and there was Chatral, the greatest rimpoche [a Buddhist teacher] I have met so far and a very impressive person.
. . . We started talking about dzogchen and Nyingmapa meditation and “direct realization” and soon saw that we agreed very well. . . . The unspoken or half-spoken message of the talk was our complete understanding of each other as people who were somehow on the edge of great realization . . . and that it was a grace for us to meet one another. I wish I could see more of Chatral. He burst out and called me a rangjung Sangay (which apparently means a “natural Buddha”) . . . He told me, seriously, that perhaps he and I would attain to complete Buddhahood in our next lives, perhaps even in this life, and the parting note was a kind of compact that we would both do our best to make it in this life. I was profoundly moved, because he is so obviously a great man, the true practitioner of dzogchen, the best of the Nyingmapa lamas, marked by complete simplicity and freedom. He was surprised at getting on so well with a Christian and at one point laughed and said, “There must be something wrong here!” If I were going to settle down with a Tibetan guru, I think Chatral would be the one I’d choose.5 (emphasis added)

An equally revealing aspect of Merton’s Asian trip is what he experienced at a Buddhist shrine in Ceylon:


. . . an inner clearness, clarity, as if exploding from the rocks themselves, became evident and obvious. . . . All problems are resolved and everything is clear, simply because what matters is clear. The rock, all matter, all life, is charged with dharmakaya [the unity of all things and all people]. . . I don’t know when in my life I have ever had such a sense of beauty and spiritual validity running together in one aesthetic illumination. Surely . . . my Asian pilgrimage has come clear and purified itself. I . . . have seen what I was obscurely looking for. I don’t know what else remains.6 (emphasis added)

Why would someone who was so heavily involved in “Christian” mysticism be so entwined in and enthusiastically embracing of Buddhist mysticism? I considered titling this booklet Something’s Wrong Here because even though Chatral meant it in a positive way, when he said those words to Merton, he himself was shocked that Merton, a professing Christian, was basically on the same page as him and that they were able to fellowship.
One of Merton’s biographers, William Shannon, made this very clear when he explained:


If one wants to understand Merton’s going to the East it is important to understand that it was his rootedness in his own faith tradition [Catholicism] that gave him the spiritual equipment [contemplative prayer] he needed to grasp the way of wisdom that is proper to the East.7


The Pope Pushes Communism Across America

The Lawless One Welcomes The Scarlet Beast of Rome to America (Sept 22, 2015)

Pope Francis And The Jesuit Order

The Pope’s Church is the Largest, Richest Corporation in the World!

SEE: http://the-trumpet-online.com/the-popes-church-is-the-largest-richest-corporation-in-the-world/; republished below in full unedited for informational, educational, and research purposes:

"F**k the Pope"
by Paul Joseph Watson
The Hypocrisy of the Pope Exposed
Published on Sep 24, 2015
The Pope is a political prostitute who is betraying Christianity and selling out the principles of freedom.

Pope Addresses Congress—The Real Meaning Behind His Speech! Next Move, The UN, Then The World!

Posted by John at 5:11 PM Links to this post