THE PROPOSED MOSQUE IN LIBERTY CORNER, BERNARDS TOWNSHIP, NEW JERSEY; ONLY ONE OF MANY THAT THE SOUTHERN BAPTISTS WANT TO HELP BUILD 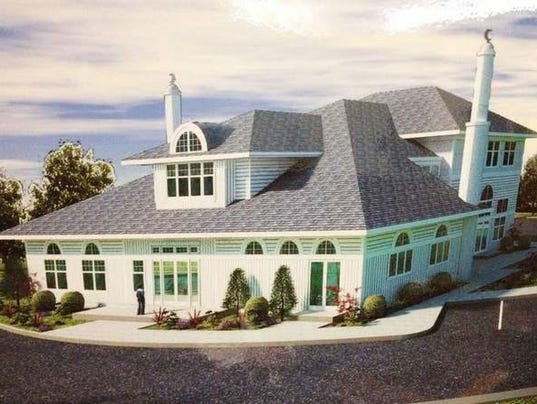 QUOTES FROM: http://theendtimes.news/2016/05/28/southern-baptist-convention-launches-mosque-building-program-to-promote-religious-liberty-and-a-general-sense-of-niceness/:
"NASHVILLE, TN – The Southern Baptist Convention has announced plans to launch an ambitious new program to build mosques all across the nation in order to help foster religious tolerance and “a general sense of niceness” towards all. The massive mosque proliferation plan will be launched through a denomination wide “Mosques Across America” building fund that will appeal to SBC members on the basis of love for “religious liberty” and “the God-given right of anyone to worship any god anyone wants, including Allah.”"
"“And here in America, all religions are to be treated equally. Everyone in America has a God-given right to worship false gods and build mosques or covens or even satanic temples,” added Moore with a smile while unrolling blueprints for a mosque that he personally plans to help build in Middle Tennessee. “Those are the rules in America, and we have to play by those rules as good American Baptists.”" 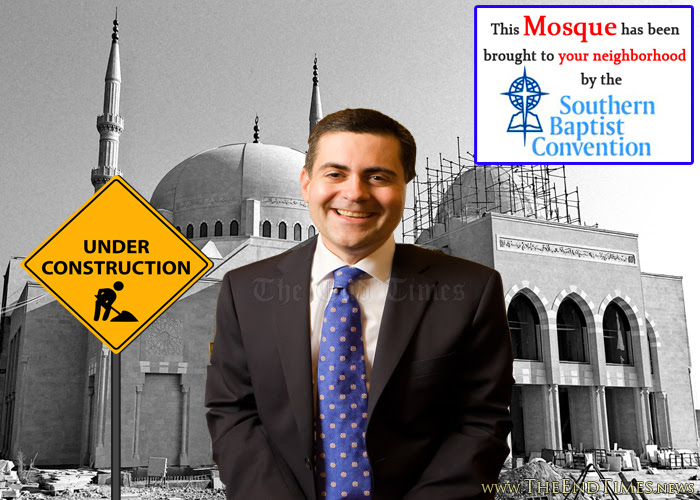 BY BUD AHLHEIM
SEE: http://pulpitandpen.org/2016/05/27/worshipping-religious-liberty-sbc-joins-mosque-building-effort/; republished below in full unedited for informational, educational, and research purposes:

Civil Rights Investigation Open Over Proposed Mosque in Bernards Township, N.J.
Published on Mar 21, 2016
The Islamic Society of Basking Ridge bought a four-acre plot in Bernards Township with plans to raze the house and build a mosque. But those plans were derailed after nearly 40 public hearings and four years of denied permits. 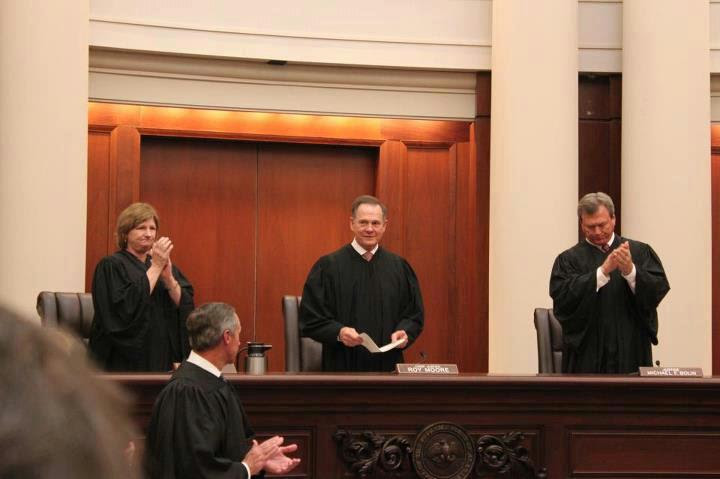 MONTGOMERY, Ala. — Attorneys for embattled Alabama Chief Justice Roy Moore have sued the state Judicial Inquiry Commission (JIC) to challenge the constitutionality of the charges leveled against the “Ten Commandments Judge” and to seek his immediate reinstatement to the bench.
“The charges against Chief Justice Roy Moore must be dismissed. The JIC has no jurisdiction over an administrative order of the chief justice. Only the Alabama Supreme Court has jurisdiction, and that court agreed with the order,” Mat Staver, founder and chairman of Liberty Counsel, said in a statement on Friday.
“We are asking the federal court to strike down the automatic removal provision in the Alabama State Constitution and we are asking that Chief Justice Moore be immediately reinstated,” he stated.
Staver also said that Liberty Counsel will also assert that the JIC violated the confidentiality rule that requires that details of an investigation be keep confidential until charges are issued.
“In this case, the JIC intentionally leaked the pending charges to the media, which is a serious violation of the JIC rules,” he said.
As previously reported, Moore was suspended from the bench earlier this month and now faces possible removal after the homosexual advocacy groups Southern Poverty Law Center, People for the American Way, the Human Rights Campaign, and a drag queen who goes by the name Ambrosia Starling, pressed the JIC to take action against Moore.
The situation began in 2013 when two lesbians in the state sued Gov. Robert Bentley, Attorney General Luther Strange and Mobile County Probate Judge Don Davis—among others—in an attempt to overturn Alabama’s marriage amendment after one of the women was denied from adopting the other woman’s child.
January 2015, U.S. District Judge Ginny Granade ruled in favor of the women, prompting Moore to send a memo to probate judges throughout the state, advising that they are not required to issue “marriage” licenses to same-sex couples as he believed that Grenade’s ruling only applied to the two women.
“[N]othing in the orders of Judge Grenadae requires Alabama probate judges to issue marriage licenses that are illegal in Alabama,” he wrote. “Pursuant to … the Federal Rules of Civil Procedure, Alabama probate judges are not subject to those orders because the probate judges are not parties or associated with any party in those cases.”
“[T]he injunction and the stay or the lifting thereof can only apply to the sole defendant, the Alabama attorney general,” Moore said. “I urge you to uphold and support the Alabama Constitution and the Constitution of the United States to the best of your ability. So help you God.”
Moore also wrote a letter to Gov. Robert Bentley, urging him to “uphold and support the Alabama Constitution with respect to marriage, both for the welfare of this state and for our posterity.”
“Be advised that I will stand with you to stop judicial tyranny and any unlawful opinions issued without constitutional authority,” he stated.
The Southern Poverty Law Center (SPLC) then filed a judicial ethics complaint against Moore over his letter to Gov. Bentley, and the homosexual activist group Human Rights Campaign (HRC) submitted 28,000 petition signatures to the JIC calling for Moore’s removal.
As confusion ensued over Moore’s letter to probate judges, one judge, John Enslen of Elmore County, asked the full Alabama Supreme Court for further guidance. In March 2015, six of the nine judges of the Alabama Supreme Court released a historic order halting the issuance of same-sex “marriage” licenses in the state. Moore recused himself from the matter and was not included in the order.
“As it has done for approximately two centuries, Alabama law allows for ‘marriage’ between only one man and one woman,” the 148-page order read. “Alabama probate judges have a ministerial duty not to issue any marriage license contrary to this law. Nothing in the United States Constitution alters or overrides this duty.”
In January, Moore sent another letter advising that the full court’s would remain in effect until it issued directives in light of the U.S. Supreme Court ruling in Obergefell v. Hodges.
“Until further decision by the Alabama Supreme Court, the existing orders of the Alabama Supreme Court that Alabama probate judges have a ministerial duty not to issue any marriage license contrary to the Alabama Sanctity of Marriage Amendment or the Alabama Marriage Protection Act remain in full force and effect,” he wrote on Jan. 6.
He also noted that his order does not weigh in on how June’s U.S. Supreme Court ruling has impact on the Alabama Supreme Court’s directive, and said that it was not his place to make that determination.
“I am not at liberty to provide any guidance to Alabama probate judges on the effect of Obergefell on the existing orders of the Alabama Supreme Court. That issue remains before the entire court, which continues to deliberate on the matter,” Moore wrote.
Earlier this month, the Alabama Judicial Inquiry Commission (JIC) announced that it had filed ethics charges against Moore as a result of the SPLC complaint, and suspended the chief justice while he faces a trial before the Alabama Court of the Judiciary.
It said that Moore was “bound by the United State Supreme Court’s interpretation and application” of the Constitution to same-sex “marriage,” but Moore notes that his letter had nothing to do with the Supreme Court order, and that the full court was to later issue directives about the matter after receiving legal briefing.
Liberty Counsel says that the JIC has no authority to render legal opinions when it disagrees with a judge’s view of the law, and that the automatic suspension requirement in the Alabama Constitution violates due process.
“The automatic removal provision places far too much power in the JIC, which can just file charges and have a judge removed,” Staver said.
_______________________________________________________

Rally for Judge Moore
Published on May 23, 2016
Complete video from the Stand With Judge Moore Rally, for God, Marriage, and the Constitution. Over 1000 Christians from across the State, and others from around the nation joined us to stand with Chief Justice Roy Moore, and demand that he be reinstated to his rightful position, and the illegitimate, politically motivated charges be dropped.


Ambrosia Starling Discusses A Run For Alabama Governor in 2018
Published on May 16, 2016
"When we treat each other decently in public, that's when we know everything's going to be all right. If you want Ambrosia Starling for Governor; if you think that's what it's going to take... baby I'm all there and all for it." So proclaimed an Alabama drag queen who has publicly jousted about marriage equality & transgender rights with suspended AL Chief Justice Roy Moore.

Posted by John at 2:25 PM Links to this post