heinrich himmler: "islam is very similar to our worldview"

"Our city will change radically....this is a good thing!"

A video clip shows German Green Party politician Stefanie von Berg giving a speech in which she celebrates the fact that mass migration will bring an end to German majority populations in cities within a few decades.
“Our society will change,” asserts Von Berg. “Our city will change radically. I hold that in 20, 30 years there will no longer be (German) majority in our city.”
“We will have plenty of people and live in a supercultural society. This is what we will have in the future. And I want to make it very clear, especially towards those right wingers, this is a good thing!” she added.
Presumably, Von Berg thinks that the wave of crime and rape that “refugees” are already bringing to German villages, towns and cities is a “good thing” too.
Quite why leftist politicians think multiculturalism has a positive impact on society remains a mystery, especially given the fact that German Chancellor Angela Merkel herself said back in 2010 that multiculturalism has “utterly failed” because immigrants do not integrate into German society.
Von Berg’s comments are similar in nature to those made by leftist German politician Gregor Gysi earlier this year.
Calling native Germans who opposed the migrant influx “Nazis,” Gysi argued that the country should take in potentially millions of “refugees” because of what Hitler did in the 1930’s.
In a video clip of his remarks, Gysi adopts a smug look before stating, “Oh, and by the way: Every year more native Germans die than there are born. That is very fortunate. It’s because the Nazis are not very good at having offspring.”
Many viewers reacted to the clip by accusing Gysi of celebrating the extinction of native Germans. 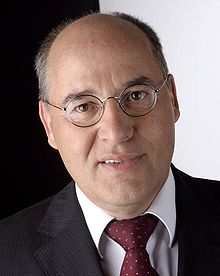 Background: Gregor Gysi is the current leader of "The Left" party, currently the 3rd biggest party in Germany. The party formed from parts of the Socialist Unity Part of Germany before the reunification.

Germany currently has the lowest birth rate of the world, ranking in at 0.9 to 1.1 for the native population. This means they are soon to be a minority and, if trends do not change, are destined for extinction.

In this video, released on his Facebook page regarding the protest "Live better without the Nazis" he tells Germans they are responsible for the refugee's well-being "because of their history between 1933-1945". He goes on to urge other European countries to accept more refugees and make immigration & asylum easier. Germany is expected to take in 500,000 "refugees" this year, although this number will likely rise.

Finally, he calls the native Germans "Nazis", ridicules them for having a birthrate below replacement level and is visibly happy about their extinction as he seems to have trouble suppressing his smile and joy.

He makes further remarks that Germany is dependent on immigration as the native population is dying too fast.

From an outside perspective, this self-hatred of voters in Germany may seem absurd, but as a German myself I will try to explain:

Firstly, he is Jewish, so he does not identify as a German (or the declining native population he mentions). This enables him to ridicule the death of another people that is not his own.

Secondly, after the end of World War 2, the allies forced the Germans to accept "a temporary constitution" called the "Grundgesetz". The Bundesverfassungsgericht (constitution office) ruled last month that all actions against the German people since 1945 are in clear violation of international law. Germany is still, officially, under Allied occupation and we are not allowed our own constitution or government. When Obama paid a visit in 2009 at one of our many American military bases, he told his soldiers that "Germany is still under occupation and will continue to be so".

Thirdly, two generations of severe brainwashing have made the Germans self loathing - they are either apathetic or happy about their own demise. There are conscious decisions to not have children. These reasons have many origins, some are found in other European countries and in America as well, but the main reasons are choosing career over children, guilt about "overpopulating" the world and producing "inherently evil, white, German" offspring, the rise of feminism and glorification of homosexuality, resignation ['I don't want to set a child into this mad future'], white flight to other countries or multicultural ideologies like deliberately having children with other races so "racism" can finally die.

Censorship of the internet and literature, arrests and prison time for "hate speech", suppression of all right wing parties and organization as well as no consequences for crimes and terrorism of Leftist extremism make true opposition impossible. It was a big step for me to start uploading more political videos that had deeper content than making fun of overweight Americans as I fear persecution, if not now, likely in the future.

The Germans have no feeling of pride in their heritage left - some native consider Germany the source of all evil. Self-hatred and support of "Anti-fascist" (= read: Anti-German) movements at universities is common, the newest generation genuinely hates itself and everything it stands for.

This self-loathing is the reason this man gets applauded for what he says while we are stunned in horror and confusion: He tells the German people exactly what they want to hear - they are evil, they are dying and deserve to be eradicated and replaced.

While German leftists are heralding the demographic suicide of their own population, Muslim imams are rubbing their hands together.
As we reported back in September, top Muslim Imam Sheikh Muhammad Ayed gave a speech in which he asserted that Muslims should use the migrant crisis to breed with European citizens and “conquer their countries,” by taking advantage of the fact that Europeans have “lost their fertility”.

Al-Aqsa Mosque Address: Europe Wants the Muslim Refugees as Labor; We Shall Conquer Their Countries
Published on Sep 17, 2015
In an address delivered at the Al-Aqsa Mosque, Sheikh Muhammad Ayed said that the European countries are not motivated by compassion toward the refugees, but by their need for labor. "We shall conquer their countries," he declared in the address, which was posted on the Internet on September 11, 2015.

Globalists Demographics is Nazism
Published on Nov 28, 2015
Alex Jones and Paul Joseph Watson break down a video that shows German Green Party politician Stefanie von Berg giving a speech in which she celebrates the fact that mass migration will bring an end to German majority populations in cities within a few decades. http://www.infowars.com/pro-migrant-p...

Posted by John at 4:20 PM Links to this post