OBAMA'S NIGHTMARE CONFIRMED: JADE HELM IS FOR THE AMERICAN PEOPLE~"MASTER THE HUMAN DOMAIN"~10 HOMESCHOOLERS SEIZED BY SHERIFF IN KENTUCKY, PUT IN OTHER HOMES

OBAMA'S NIGHTMARE FOR US
CONFIRMED:
JADE HELM IS FOR THE AMERICAN PEOPLE
Published on May 8, 2015
David Knight and Rob Dew break down the sinister purpose behind Operation Jade Helm detailing how it is part of a broader plan to have the military and police forces work together to control the people in times of economic crisis and natural disaster.

"MASTER THE HUMAN DOMAIN"
BY MAPPING EVERYTHING ABOUT YOU

Kentucky Sheriff Kidnaps 10 Children
From Homeschool Family
Published on May 9, 2015
***(270) 756-2361***
Police seized ten children from an “off grid” homeschool family in Kentucky on Wednesday after receiving an anonymous tip about the family’s traditional lifestyle.
http://www.infowars.com/police-seize-...
EXCERPT:

"The nightmare story began when sheriff’s officers set up a blockade around Joe and Nicole Nauglers' rural property before entering the premises. Eight of the kids were out with their father but Nicole and two of her oldest children were at home. Nicole attempted to drive away but was subsequently stopped and arrested for resisting (attempting to prevent officers from taking her two boys away).
The sheriff then demanded Joe Naugler turn over the other eight children by 10am the next day or face felony charges, an order with which he complied.
“They are an extremely happy family,” said family friend Pace Ellsworth, who asserts that the Nauglers were targeted because of their “back to basics life” and their decision to homeschool their children."
http://www.gofundme.com/tz4xng
http://www.breckinridgecountysheriff....
****(270) 756-2361****

THE NAUGLERS OF KENTUCKY
10 CHILDREN SEIZED,
PLACED IN HOMES OF STRANGERS

Published on May 9, 2015
If you want to know what Jade Helm 15 is about, and the meaning behind Mastering the Human Domain, just look at who is being targeted.

Authorities say they are using mass surveillance to target "anomalies", and that the SKYNET surveillance program is just to track suspected terrorists. They're not going to use your facebook posts against you.

Well, that is if you're an ISIS sympathizer like Elton Simpson. The wanna-be terrorist was long known to federal authorities and even posted about carrying out an attack hours before to social media. The FBI now admits they sent a bulletin to local police warning them in advance about the potential threat, but they failed to show up themselves to thwart the attack.

In fact, the only time the State acts is when they're taking down American citizens. Specifically, those citizens who refuse to blindly obey the state. Those are the real anomalies. Beware what you post to social media.

DHS BUS TRANSPORTING ILLEGALS TO DETENTION CENTER IN CALIFORNIA; DRIVER ADMITS THEY ARE FROM SOMALI AND AFRICA 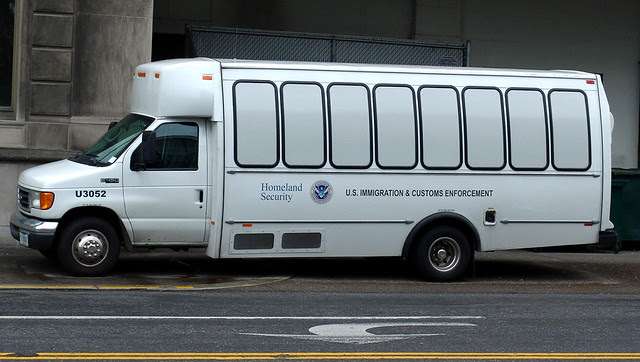 DHS BUS WITH WINDOWS COVERED STOPS FOR GAS IN VICTORVILLE, CALIFORNIA; DRIVER ADMITS THEY ARE TRANSPORTING ILLEGAL SOMALI AND AFRICAN IMMIGRANTS TO A DETENTION CENTER
"SEEKING ASYLUM" IS THE SECRET PASSWORD TO ENTER THE U.S. ILLEGALLY
Published on May 7, 2015
BREAKING NEWS! ***** Make Viral! WTH! Evangelist Anita and family runs into the following: - Illegal immigrants being transported late at night by DHS to "Detention Centers" in Victorville, CA on the corner of Route 395 and Bear Valley Rd, (161 miles away from Mexico Border!!!) - includes 'Somalis' and 'Africans' ... PROOF! LISTEN TO ENTIRE FOOTAGE DETENTION CENTERS IS MENTIONED! Pastor Ignacio and Evangelist Anita Fuentes asks questions, get's answers... wow!
Victorville is 161 miles away from Mexico Border! They are taking them to the high desert, thumb printing them and letting them go all over! My friends, many Somalians are Muslim and many African's especially in the northern region of Africa are radical Islam terrorists.
Posted by John at 1:59 PM