Paris Summit to Create World Police State
Published on Nov 16, 2015
Alex Jones talks with Infowars reporters David Knight and Jakari Jackson about the attacks in Paris and how a global summit is being held there and how now these attacks will be used to justify yet further globalization.

Coincidence? Paris Shooting, Before Paris Summit! The Real Agenda Exposed & You’re Not Gonna Like It

Many other Twitter users responded with hostility to WikiLeaks’ argument, but the organization refused to give ground

BY BLAKE NEFF OF THE DAILY CALLER
SEE: http://www.infowars.com/wikileaks-blames-america-for-paris-attacks/;
EXCERPTS:
International whistleblower organization WikiLeaks is casting blame on the United States, United Kingdom and France for the terror attacks Friday that have killed at least 140 people.

At least 39 dead in French terror attacks this evening. France has closed borders. US, UK, France fed ISIS. Not so funny now, is it?
— WikiLeaks (@wikileaks) November 13, 2015

Many other Twitter users responded with hostility to WikiLeaks’ argument, but the organization refused to give ground.
WikiLeaks, created by Julian Assange, has frequently taken a hostile attitude towards America’s anti-terrorism policy. It published Bradley Manning’s documents relating to the Iraq and Afghanistan wars, and played a major role in Edward Snowden’s flight to Russia with files taken from the NSA.
_____________________________________________

WikiLeaks Reveals who Funded Paris Attack
Published on Nov 16, 2015
Alex Jones discusses how WikiLeaks has been receiving hate for just telling the truth about the Paris attack and how Infowars has been telling you this for months.

SEE: http://the-trumpet-online.com/paris-terrorist-identified-as-syrian-refugee-migrant-who-crossed-open-borders/; republished below in full unedited for informational, educational, and research purposes:

(NaturalNews) It has now been confirmed that at least one of the Paris terrorists responsible for last night’s massacre had crossed into Europe as a “Syrian refugee.” He registered as a refugee on Leros island in Greece, according to Yannis Koutsomitis, who quotes Greece’s Ministry of Public Order and Citizen Protection (see Tweet, below).
“A Greek government official revealed the man, who died in the siege on the French capital, had passed through the southern European country last month,” reports Express.co.uk.
“Citizen Protection Minister Nikos Toskas, in charge of police forces in Greece, has released the following statement: ‘On the case of the Syrian passport found at the scene of the terrorist attack, we announce that the passport holder had passed from Leros on October 3 where he was identified based on EU rules.'”
Here’s the screen shot from the Express, just in case they pull the story (there will be tremendous pressure by leftists to rewrite this history and destroy any evidence that the Paris terrorists were migrant “refugees”)…
An “act of LOVE?”
When open borders advocates talk about why nations should have no borders — a patently absurd idea — they always invoke “LOVE” as the justification for eliminating borders. Even Republican presidential candidate Jeb Bush claims that illegals crossing the border into the United States is an “act of love.”
Many in the alternative media have openly and repeatedly warned that so-called “refugees” in Europe were predominantly military-aged men waiting to be activated as occupying soldiers to carry out attacks against western civilization, but clueless (or treasonous) national leaders like Angela Merkel insisted that migrants should be treated with open arms and “tolerance.”
In a recent radio interview, I openly warned about the “activation” of militants in Europe just two days before the attacks on Paris. From Red List News, Episode 8, broadcast TWO DAYS before the Paris attacks:
Mike Adams: And then there’s also the question, why is it only young men that are fleeing in Europe? All the photos of the migrants are young men… men that happened to be military-aged men. And we’re told that they’re fleeing Syria, for example, because of the war there… I think there’s a very real possibility, James, that in Europe especially, this is a planned, boots-on-the-ground occupation of Europe with an activation date at some point in the future where all these young men will be activated, they will pick up rifles or weapons or whatever they can find, and they will overrun the nations of Europe with their belief system.
James White: Well it’s uncanny, Mike, because when I was on the Commonsense Show doing the news report this previous week, I mentioned the very same thing about here in the United States as well. I think that we are basically being surrounded. I mean, there’s a lot of these immigrants that are coming across who as you stated, accurately, are military aged, they’re coming across in droves, and I submit to you that they are “sleeper cell” type of…
Mike Adams: That’s the term.
James White: Like you said, and I said almost verbatim what you just stated. There’s going to come a point in time, and I don’t know when that is, but they’re all going to be activated. And now, here in America, as long as we still have firearms, they’re not going to get very far, certainly in Texas…
Mike Adams: Remember that across Europe, the act of self defense has been criminalized. In the UK, for example, you’re not allowed to fight back against a home invasion… a robber, a rapist…. you get arrested if you fight back. And so most of Europe has been completely disarmed, meaning thatthis invasion can be highly successfuland they don’t even need firearms. These young men could pick up hatchets and machetes and actually overrun Europe. Literally there’s almost no defense in European cities against this kind of invasion.
Even as many of us in the independent media have been sounding the alarm over open borders, migrants-as-terrorists and “sleeper cells” being activated in Europe, political leaders in both Europe and the United States have remained oblivious to the warnings. That naive tolerance, it now seems, has resulted in a massacre in Paris… and Paris may be just the beginning of what ISIS has planned for both Europe and the United States.

ISIS threatened to send 500,000 migrants to Europe as part of a “psychological weapon”

Open borders policies are not merely idiotic; they were embraced across Europe even in the face of direct threats by ISIS to occupy Europe with enemy forces.
In February of this year, ISIS “threatened to release the huge wave of migrants to cause chaos in Europe,” reported the Daily Mail. That paper goes on to report:
ISIS has threatened to flood Europe with half a million migrants from Libya in a ‘psychological’ attack against the West, it was claimed today.
…the militants hope to cement their control of Libya then cross the Mediterranean disguised as refugees…
Yet even in the face of a direct, specific threat to occupy Europe with ISIS forces disguised as refugees, utterly clueless political leaders at every level of government — local and national — openly welcomed ISIS terrorists as “refugees” into their countries as the ultimate act of P.C. obedience.
No political leader, it seems, wants to be characterized as “mean” in an age of hyper sensitivity to political correctness. So they issued tweets and speeches congratulating themselves for practicing “love” and “compassion” while the terrorists marched right across their borders, disguised as refugees.
Now the question becomes a simple one: Will national leaders across Europe and the United States ever come to their senses and start controlling their borders? Or will they continue to allow terrorists and violent criminals to march right into their countries in a desperate effort to appear “compassionate” even as their own countrymen are being executed by the hundreds or thousands?
Mark my words: Paris is only the beginning. ISIS has far bigger plans than anything we’ve witnessed so far. Nations that don’t control their borders will suffer horrific losses. 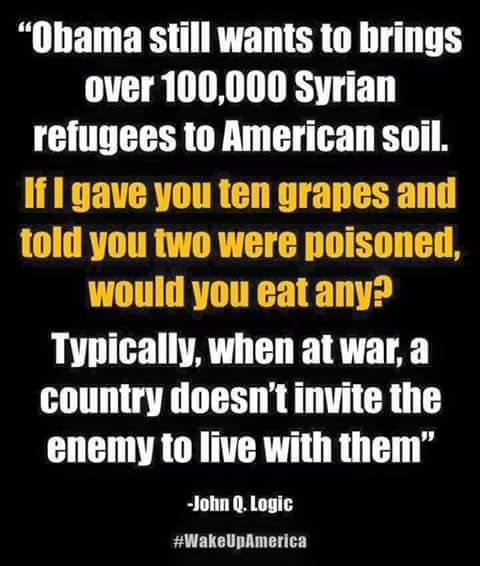 Syrian Refugees From The Muslim World Are Arriving In New Orleans

Published on Nov 15, 2015
it has now come to light that refugees are already coming into the New Orleans area.

Catholic Charities, which receive federal grants from U.S. Department of State/Bureau of Population, Refugees and Migration, have apparently taken in two Syrian refugee families already and are expecting many more.

There are approximately 180 cities in the country that are eligible to accept the 10,000 Syrian refugees. The full list of those cities, which includes Baton Rouge, Matairie and Lafayette is in the article below from The Hayride.


The 10,000 Syrian refugees are first flown to the United States, according to the French news wire Agence France-Presse, with the State Department paying the International Organization for Migration (IOM) for the airfare.

Then, once the refugees arrive in the country, they could be dispersed across the 180 cities listed above, where they are to aided within the first 30 to 90 days in settling and finding employment in the area.

After approximately 90 days, refugees are no longer eligible for the State Department-funded support that they were receiving through migrant and refugee services. However, they are able to join support programs through the Department of Health and Human Services.

Additionally, it is unclear how much the screening process for the 10,000 Syrian refugees will cost American taxpayers.

The State Department spent $1.1 billion resettling people from around the world in the country last year. That’s about $16,000 per person. http://thehayride.com/2015/11/breakin...
http://www.washingtontimes.com/news/2...