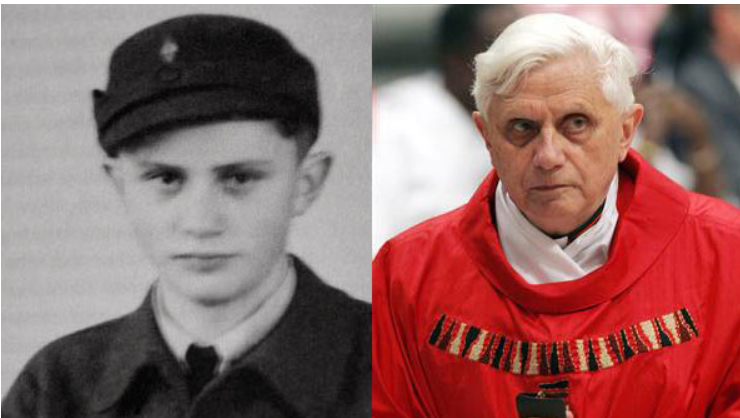 ABOVE: POPE BENEDICT XVI AS A HITLER YOUTH
DERANGED POPE FRANCIS LIKENS TRUMP TO HITLER, WARNS OF "WALLS & BARBED WIRE"
BY ROBERT SPENCER
SEE: https://www.jihadwatch.org/2017/01/pope-likens-trump-to-hitler-warns-of-walls-and-barbed-wire;
Mr. Bergoglio, tear down that Vatican wall!
The Pope said these things as Trump was being inaugurated. His point was unmistakable. He said: “The Germans at that time also wanted to protect themselves with ‘walls and barbed wire so that others cannot take away their identity.'”
This is an extraordinarily strained analogy. Hitler after 1940 kept the Jews from emigrating and put them in concentration camps so he could kill them. Trump wants to stop immigration from jihad terror hotbeds in order to keep Islamic jihadists from killing us. For the Pope to liken the two shows that he is more of a shallow Leftist ideologue than any kind of spiritual or moral authority.
“Leave them; they are blind guides. And if a blind man leads a blind man, both will fall into a pit.” (Matthew 15:14)


…In an hour-long interview with Spanish newspaper El Pais conducted as Donald Trump was being sworn in as US president, the pontiff also condemned the idea of using walls and barbed wire to keep out foreigners.
“Of course crises provoke fears and worries,” he said but added that for him “the example of populism in the European sense of the word is Germany in 1933.
“Germany… was looking for a leader, someone who would give her back her identity and there was a little man named Adolf Hitler who said ‘I can do it’.”
“Hitler did not steal power,” the pope said. “He was elected by his people and then he destroyed his people.”
The Germans at that time also wanted to protect themselves with “walls and barbed wire so that others cannot take away their identity,” he said.
“The case of Germany is classic,” he said, adding that Hitler gave them a “deformed identity and we know what it produced.”
Pope Francis however underscored that it was too early to pass judgement on Trump.
“Let’s see. Let’s see what he does and then we will evaluate,” he said.

TREASON AGAIN: OBAMA SENT $221 MILLION TO THE "PALESTINIANS" IN HIS FINAL HOURS IN OFFICE~PLUS $11.25 MILLION FOR FOREIGN AFFAIRS, CLIMATE CHANGE, & THE U.N.


WASHINGTON (AP) — Officials say the Obama administration in its waning hours defied Republican opposition and quietly released $221 million to the Palestinian Authority that GOP members of Congress had been blocking.
A State Department official and several congressional aides said the outgoing administration formally notified Congress it would spend the money Friday morning. The official said former Secretary of State John Kerry had informed some lawmakers of the move shortly before he left the State Department for the last time Thursday. The aides said written notification dated Jan. 20 was sent to Congress just hours before Donald Trump took the oath of office.
In addition to the $221 million for the Palestinians, the Obama administration also told Congress on Friday it was going ahead with the release of another $6 million in foreign affairs spending, including $4 million for climate change programs and $1.25 million for U.N. organizations, the congressional aides said. The aides and the State Department official weren’t authorized to speak publicly on the matter and demanded anonymity….

PRESIDENT TRUMP UNVEILS PLANS TO UNDO MUCH OF OBAMA'S DAMAGE

PRESIDENT TRUMP UNVEILS PLANS TO UNDO
MUCH OF OBAMA'S DAMAGE
BY ALEX NEWMAN
SEE: http://www.thenewamerican.com/usnews/politics/item/25192-president-trump-unveils-plans-to-undo-much-of-obama-s-damage;
After quoting the Bible in a call for national unity, acknowledging God the Creator, blasting the establishment, and vowing to put “America First” in his inaugural address, President Donald Trump is reportedly ready to unleash a torrent of executive orders and actions. At the top of the agenda, administration officials say, is reversing some of the damage inflicted by former President Barack Obama with his infamous “pen and phone.” Among the first targets are Obama's illegal “climate” schemes and his radical power grab purporting to regulate virtually all waters across the United States. Also in the cross-hairs are pseudo-“free trade” regimes such as the Trans-Pacific Partnership (TPP), the North American Free Trade Agreement (NAFTA). ObamaCare is also on the chopping block. And the border will be brought back under control, the White House said. How much of Obama's largely unconstitutional “legacy” will be undone, and how quickly, remains to be seen.
Immediately following his inauguration, Trump got straight to work on his first official acts as president. Among other duties, he signed a law passed by Congress to grant retired General James Mattis a waiver to legally serve as Trump's secretary of defense, required by law because the Marine was still in military service less than seven years ago. He signed documents making his cabinet picks official, joking that he assumed Secretary of State nominee Rex Tillerson had been confirmed today. He signed a document proclaiming a new “National Day of Patriotism.” The document was not yet available on the White House website by press time.
He also signed an executive order for “minimizing the economic burden” of ObamaCare. "It is the policy of my Administration to seek the prompt repeal of the Patient Protection and Affordable Care Act [ObamaCare],” the order states.  "In the meantime, pending such repeal, it is imperative for the executive branch … take all actions consistent with law to minimize the unwarranted economic and regulatory burdens of the Act, and prepare to afford the States more flexibility and control to create a more free and open healthcare market.”
Trump, smiling as he signed away, was surrounded by family, congressional leaders from both parties, and others, as attendees joked about who should get which pen that Trump used in his first official acts.

Update: After this article was published, additional information was added about Trump’s actions on ObamaCare.

Related articles:
President Trump Cites Bible in Unity Call; Touts “America First”
Trump vs. the Establishment
Inauguration or Coup: Which Will It Be?
Trump: "Americanism, Not Globalism, Will Be Our Credo”
Blasting “False Economy,” Trump Takes on the Federal Reserve
Trump Highlights Huge Role of Obama and Hillary in Rise of ISIS
Top CFR Globalist Warns UN Will Get “Hammered” by Trump
Lawless "Billionaire Club" Behind Green Scam, Senate Study Finds
Climate Alarmists Have Been Wrong About Virtually Everything
The EU: Regionalization Trumps Sovereignty
Trans-Pacific Partnership (NAFTA on Steroids) Threatens Sovereignty
The “Free Trade” Agenda Threatens Our Rights