NY DHS Offers $500 To Rat Out Your Neighbors

Published on Jul 26, 2014
New York’s Division of Homeland Security is posting signs on businesses to encourage people to snitch on fellow citizens who buy such things as MRE’s (Meals Ready to Eat), ammunition, flash lights, match containers, gas masks and other items deemed to be ‘prepper’ in nature.
http://www.truthandaction.org/ny-dhs-...

TO RAT OUT FELLOW CITIZENS

SHOWOFF PASTORS PERFORMING STUNTS IN CHURCH~COULD GET THEM SERIOUSLY HURT PHYSICALLY & YOU SPIRITUALLY!

Is Your Pastor A Showoff?

Republished from "Beginning and End" at http://beginningandend.com/is-your-pastor-a-showoff/, below in full unedited for informational, educational, and research purposes. Some pictures and videos added by us: Is church really the place for a stunt show?

Study to shew thyself approved unto God, a workman that needeth not to be ashamed, rightly dividing the word of truth. – 2 Timothy 2:15.
So you think you go to a good church? What does your pastor do to show off how great he or she is? Does he shoot himself out of a cannon? Set himself on fire? Enter the church like James Bond? Well a number of church, who have fully embraced the modern-day heretical entertainment model for church have done just that. The sad truth is that these pastors have ignored the true way a pastor should be a show off, in order to appease the flesh and pack the stands on Sundays.
A Pastor Sets Himself on Fire?
As part of the “Daredevil” series, Pastor Troy Gramling of Potential Church sat in car that was set on fire via special explosives.
SEE VIDEOS:
https://www.youtube.com/watch?v=rxW8g5f1qFM
https://www.youtube.com/watch?v=xJugWuKJ12w
In John Chapter 12, the Bible reads:

Jesus Christ proclaimed that it was His death on the cross, which provided the atonement for all sin – that would draw people to Him. Not gimmicks or stunts. Romans 1:16 says the Gospel is literally “..the power of God to salvation.” In order to convert souls to believing in Jesus Christ and to draw people to God, a pastor does not need to rely on tricks and entertainment. He must rely on the supernatural power of God’s Word. A Pastor’s job is to point the congregation to Christ as He is the only way to forgiveness of sin. Instead, who are the people at Potential Church cheering for? Who is receiving all of the attention? The pastor.
“Bond, Pastor Bond”
Megachurch Pastor Rod Parsley entered his Sunday church service via zip line. Here is a clip. With this type of silliness taking place it is no surprise that Parsley is a teacher of the Word of Faith, “sow a seed” heresy. Here in the clip below, he is commanding his viewers to sow a seed of $54.17 to “release” an Isaiah 54:17 blessing. The central idea is that by giving money to Parsley, the viewer is “activating” The Lord to bless them.
SEE VIDEO:
https://www.youtube.com/watch?v=RJpkmbvHMXE

Pastor Ed Young and his wife Lisa put a bed on stage to preach about sex.

In one of the all-time most abominable gimmicks to attract church attenders, Pastor Ed Young of Fellowship Church in Dallas, Texas held a 24-hour “bed-in” with his wife as they laid in a bed on the roof of the church to promote better sexual relations in the church. All of this was a part of the marketing campaign for Young’s book Sexperiment.
Here is an ad for the book: 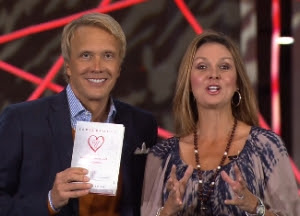 SEE VIDEOS:
https://www.youtube.com/watch?v=UYqWb2fGK64, and:
In Ezekiel 22, the prophet, speaking by inspiration of God, delivers a scathing rebuke to the priests of ancient Israel. Not only were they not teaching God’s Word accurately, they were promoting sexual sin:
In thee are men that carry tales to shed blood: and in thee they eat upon the mountains: in the midst of thee they commit lewdness. In thee have they discovered their fathers’ nakedness: in thee have they humbled her that was set apart for pollution.And one hath committed abomination with his neighbour’s wife; and another hath lewdly defiled his daughter in law; and another in thee hath humbled his sister, his father’s daughter. –Ezekiel 22:9-11.
Right afterwards, Ezekiel shifts his attention to the priesthood. And God’s judgment is for one specific reason:

Pastors of the modern church age like Ed Young have put no difference between profane and inappropriate sexual talk and Biblical preaching. For a pastor to bring a bed onto the pulpit for Sunday service and have his wife sit with him to discuss sex is utter depraved abomination and blasphemy against God. And why is this being done? All in the name of church attendance, book sales and money.
Pastor Giving Away Assault Rifles?

Pastor Heath Mooneyham of Ignite Church in Joplin, MO, decided to entice men to attend his Fathers’ Day 2014 service by giving away free AR-15 assault rifles. His offer, which he promoted through a video ad below, was serious, and two fathers ended up winning.

The give away was part of an outreach by Ignite Church to a specific demographic group: males age 18 to 35.
“That’s the biggest black hole in our society,” Mooneyham said.
To lure them in, Sunday morning services start later (10 a.m. and 11:30 a.m.) than many churches, the rock music is loud, the black-and-green color theme is almost reminiscent of a video game system, and the pastor has tattoos and a short mohawk.
“We’re not trying to put on a show for anybody,” Mooneyham said. (source).

[B&E: The "Pastor" uses suggestive language at a point in the video].
Beginning and End previously featured Ignite Church and Mooneyham after they performed the song “Sexy And I Know It” – an ode to fornication, as part of their Sunday worship service (for their own sex sermon series). Despite the pastor’s protests to the contrary, Ignite Church is immersing itself in secular culture and lusts of the flesh to lure people to church.
James 4:4: says: Ye adulterers and adulteresses, know ye not that the friendship of the world is enmity with God? whosoever therefore will be a friend of the world is the enemy of God.  What spirit is leading Mooneyham and Ignite Church – a spirit of the world or the Spirit of God? Sadly, it seems quite obvious they have fully befriended the sinful world.
A Pastor’s Duty – Preaching the Bible Pastors should show off their time in intense Bible study.

I charge thee therefore before God, and the Lord Jesus Christ, who shall judge the quick and the dead at his appearing and his kingdom; Preach the word; be instant in season, out of season; reprove, rebuke, exhort with all long suffering and doctrine. For the time will come when they will not endure sound doctrine; but after their own lusts shall they heap to themselves teachers, having itching ears; And they shall turn away their ears from the truth, and shall be turned unto fables. – 2 Timothy 4:1-4.

The Bible is clear that a pastor should be able to show off their knowledge of Scripture to their congregation. Each week, a pastor should demonstrate and be“approved unto God” that he has gone to the Bible to earnestly and passionately seek God’s wisdom and truth in order to preach his sermon. If God approves of the amount of Bible study time and research a pastor has put into a message the congregation will certainly be aware of it as well.  A Pastor is called to be a“workman”, who is capable of rightly interpreting and teaching the Bible. Not demonstrating this is something that should make a pastor feel “ashamed.”

The Apostle Paul, instructing his disciple Timothy on how to be a pastor, commanded him to “preach the word.” This command, given by inspiration of the Holy Spirit, make it clear that a pastor’s chief responsibility is to accurately teach the Bible. A Pastor should consistently teach sound, Biblical doctrine. And with the command, Scripture prophesies a warning that a time was coming when Christians would no longer want to hear “old time Bible preaching” but instead want flesh-pleasing spectacles and pastors who were willing to accommodate their earthly desires and give messages that are “feel good” and and not based on “truth” which is the Bible. And this is precisely what is taking place in churches all over the United States and the world.
So what kind of show off is your pastor? One who is devoted to preaching and teaching the Bible accurately, demonstrating his study and time spent seeking God, or one who is much more focused on entertaining the church, showing how much he is accomplishing in the world and making the Gospel secondary to the “show” that he (or she) is providing at Sunday Service? Lord willing, you will be desperately seeking the former and avoiding the latter.