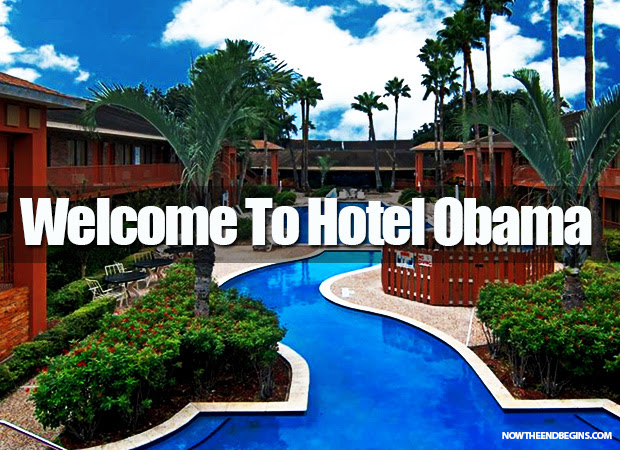 To The (Alternate) Hotel Camp FEMA

Published on Jul 18, 2014
SGT. Joe Biggs, Jon Bowne, Kit Daniels, and Adan Salazar have booked a reservation at Hotel Camp FEMA. As the investigation ensued, their reservations canceled, news of the plans of the Federal Government short changing The Hotel Camp FEMA to divert a monstrous backlash of whats left of Freedom Of The Press In America. A visit to the BCFS non-profit organization in Harlingen, Texas where Illegals would have been housed, was canceled even before our reservations were.

Realization setting in, we found ourselves in a web of homeland security vehicles and buildings of every size and shape. A gluttonous display of epic proportions is being built by the Federal Government in The Rio Grande Valley of Texas.

There is a massive Federal presence in this once serene Valley in Southern Texas. The Rio Grande Valley is a wonderful piece of Texas history. But it is being invaded not just by an avalanche (4 times higher since 2011) of illegal aliens. Tracking in votes for our out of control money hoarding ringleaders,for lack of a better term. Not to mention disease, gang violence, theft, assault, impending economic collapse. This isn't about race, it could be your own race that gives your family Tuberculosis. It could be mine.

Every race, creed, and religion is walking across our borders with "who knows what?" while we all get groped at the airport.
VIDEO:
SEE BING MAP OF BCFS FACILITY:
http://www.bing.com/maps/?v=2&cp=nbyvz36vvsvw&lvl=18&sty=b&q=3700%20e.%20hARRISON%20aVENUE%2C%20hARLINGEN%2C%20TX&form=LMLTCC

“They [the company brass] said not to let you in right now,” he told us.

"The BCFS, which also manages the shelter housing 2,000 illegal immigrant youth on Lackland Air Force Base, began as an orphanage in 1944, but has emerged as a global network of companies which work for various federal agencies such as FEMA during government-declared emergencies."

CAN CARING FOR ILLEGALS BE CHRISTIAN?~CATHOLICS & BAPTISTS TAKE OBAMA'S BRIBERY CHECKS TO PUT "CHRISTIANITY" INTO ACTION

Published on Jul 15, 2014
You will not believe how far back this orchestrated collapse of America goes:
- HHS Money To Church Entities Long Before Waves Of Illegal Immigrants
- Map of Redistribution of Illegal Immigrants
- NYC creates ID Card so 500k Illegal Immigrant Can Get Services
- Ad Offers more than $6,000 Per Month To House Illegal Immigrants
- Border Control Agent: "Diseases coming in we haven't seen in years"
Adult Illegal Immigrants posing as children to enroll in H.S.
- Honduras asks U.S. not to deport Honduran Kids
and much, much, more...
Evangelist Anita Fuentes Website: http://www.emoaf.org/

to house immigrant children in Milwaukee:

SEE: http://www.infowars.com/local-police-not-private-security-guard-headquarters-of-company-behind-illegal-alien-resort/;
EXCERPT:
The BCFS, which also manages the shelter housing 2,000 illegal immigrant youth on Lackland Air Force Base, began as an orphanage in 1944, but has emerged as a global network of companies which work for various federal agencies such as FEMA during government-declared emergencies.
Other so-called religious charities are also profiting from the current border collapse.
Last Friday, World Net Daily reported that Catholic Charities USA and other religious groups were working with the federal government behind the scenes to temporarily shelter and resettle the children in dozens of communities across the United States.
In 2012 alone, Catholic Charities USA received nearly $2 million in grants from the government, a hefty sum for a non-profit.
And the U.S. Conference of Catholic Bishops and eight other non-profits have received hundreds of millions of tax dollars to resettle immigrants across the U.S.