PASTOR BOB FU: CHINA'S COMMUNIST REGIME IS
"THE LARGEST THREAT TO THE UNITED STATES"
At the Western Conservative Summit, we sat down with Bob Fu, founder and president of ChinaAid. He was a student leader during the Tiananmen Square demonstrations in 1989, and he was a house church leader in Beijing, until he and his wife, Heidi, were imprisoned for two months in 1996 for “illegal evangelism.” They fled to the US as religious refugees in 1997.
We discuss increasing religious persecution in China against house Christians, underground Catholics, Uyghur Muslims, and Falun Gong practitioners. And we look at how the Chinese Communist Party is exporting its abuses abroad, especially in the United States, to suppress freedom of religion and belief.

DAYTON, OHIO SHOOTER, CONNOR BETTS,
MAY BE ANTIFA'S FIRST MASS KILLER
Find out the connection between the Dayton, Ohio shooter
and the violent far-left Antifa organization!!!
SEE: https://summit.news/2019/08/07/dayton-mass-shooter-attended-antifa-rally-armed-with-gun-similar-to-one-used-in-massacre/
Posted by John at 2:00 PM Links to this post

OPEN LETTER TO THE PRESIDENT IN REBUTTAL OF THE NEW YORK POST'S PLEA TO BAN "WEAPONS OF WAR"
SEE: https://www.ammoland.com/2019/08/open-letter-to-the-president-in-rebuttal-of-the-nyp-plea-to-ban-weapons-of-war/;
Posted by John at 1:39 PM Links to this post 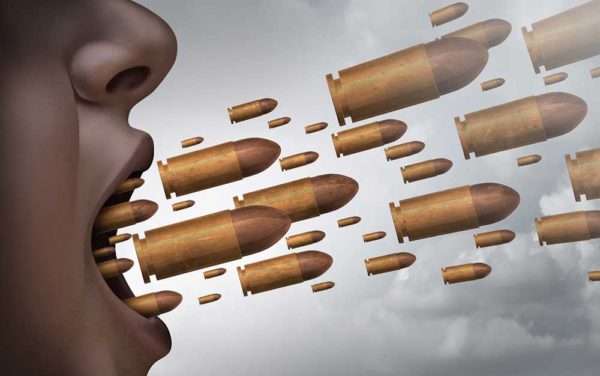 EXPLOITING MASSACRES TO RAISE POLL RATINGS
BY PAT BUCHANAN
SEE: https://www.ammoland.com/2019/08/exploiting-massacres-to-raise-poll-ratings/;
Posted by John at 1:34 PM Links to this post

‘The fact of the matter is they should be illegal, period,’ says Biden

BY JAMIE WHITE
SEE: https://www.infowars.com/bingo-joe-biden-admits-hell-ban-guns-if-elected-in-2020/;
Posted by John at 1:27 PM Links to this post

SOUTHERN BAPTIST PRESIDENT PROVES DENOMINATION HAS FULLY EMBRACED
SECULAR IDEOLOGY
SEE: http://the-trumpet-online.com/sbc-president-proves-denomination-has-fully-embraced-secular-ideology/; republished below in full unedited for informational, educational and research purposes:
BY Jeff Maples
In June, the Southern Baptist Convention officially adopted Critical Race Theory — an anti-Biblical worldview that treats every circumstance in society through the lens of racism — as a “useful tool” for analyzing racism in our churches and society. Though many conservatives tried to speak out against it, Resolution 9 was overwhelmingly supported by the messengers present at the convention.
Critical Race Theory (CRT) emerged as an offshoot of Critical Theory, a neo-Marxist philosophy that has its roots in the Frankfurt School and its methods are drawn from Karl Marx and Sigmund Freud. CRT teaches that institutional racism exists within every structure of society and that these structures are intrinsically designed in such a manner as to protect and preserve “white supremacy” in our culture. Further, CRT does not rely on factual statistics or objective evidence to support the theory, rather it relies on anecdotal evidence and personal experience.
JD Greear is the current president of the Southern Baptist Convention — and no former president has pushed the denomination toward the full embrace of progressive secularism as has Greear. Greear has long been a proponent of “white privilege” theology, basically a fork of classic black liberation theology taught by James Cone. Further, Greear has embraced intersectionality — a method of victimology that combines “oppressed” groups of people for the purpose of standing against the “oppressor” — and has called on Christians to stand up for LGBTQ rights while insisting that sodomy is morally equivalent to other sins such as boasting or greed. While boasting the Southern Baptist church plants are becoming “less white,” Greear says it’s okay to vote for pro-abortion Democrats.
In a recent article published on his website titled Three Ways to Lay Down Your Privilege, Greear pleads with Christians to “lay down their privilege” for the minority.
Everyone who possesses power, in this world or God’s kingdom, possesses privilege. Those in the world use their privilege for their own benefit. Those of us in God’s family, however, have the privilege of laying down our power for the benefit of others.
Basically, Greear implies that the “straight, white, male” Church is wallowing in its bondage of protecting their own power. “My prayer for the church is that we would rejoice in the privilege of laying down power rather than wallowing in the bondage of protecting it.” Of course, there is literally nobody doing this. There is not a single person who is outspoken against the social justice infiltration in the Church who is “wallowing in bondage” to protect their own racially supreme power. It’s an asinine statement. The entire article is ludicrous and simply affirms how far left the denomination has gone.
(Publisher’s comment: One of our problems is, we have not seen the  subject of “race” in a doctrinal context and have ignored it as pastors and theologians for fear of being tagged as racist.  The word race, racist or racism is not found in the KJV Bible.  And yet nothing worse can be said about a person today than to call them a “racist.”   It is really an assault on the word of God, who according to the Apostle Paul has declared that God has divided the people of the world into Nations. In his sermon at Mars Hill in Athens he said, And (God) hath made of one blood all nations of men for to dwell on all the face of the earth, and hath determined the times before appointed, and the bounds of their habitation;  But the world despises that message.  Just as at the Tower of Babel they want all the world to be on “nation (race). So, they have made up a sin, a crime, called racism and have called it a “hate crime.”  Worse even than any other including murder.  It is also an attempt to brand the Jew as evil for trying to keep their nation pure and separate, therefore they are branded as, “racist”.  But as happens so many times they have played on the ignorance of people because there is nothing wrong with the dictionary meaning of the word race.  Webster’s on line dictionary gives the following definition: “The lineage of a family, or continued series of descendants from a parent who is called the stock. A race is the series of descendants indefinitely. Thus all mankind are called the race of Adam; the Israelites are of the race of Abraham and Jacob…”
We say we are KJV only but are ashamed to use KJV only words.  We substitute “people groups” for the word “nation”, and “harlot” for “whore”, and “donkey” for “ass”.  But we aren’t embarrassed to wear all kinds of undress see all clothing even to church, and watch all kinds of movies and TV, even in our own living rooms, with far worse language than this.  Maybe we should reexamine what the Lord Jesus said when He warned at Mt 24:50 The lord of that servant shall come in a day when he looketh not for him, and in an hour that he is not aware of, Mt 24:51 And shall cut him asunder, and appoint him his portion with the hypocrites: there shall be weeping and gnashing of teeth.  I’ve been preaching for over seventy years and when I think of how soon I will be meeting my Lord, I shudder at the meaning of that word “hypocrite.”  I trust that you do too.)
Posted by John at 1:20 PM Links to this post

FORMER CNN HOST: TRUMP SUPPORTERS
MUST BE "ERADICATED"
BY R. CORT KIRKWOOD
SEE: https://www.thenewamerican.com/usnews/politics/item/33038-former-cnn-host-trump-supporters-must-be-eradicated?vsmaid=5505&vcid=3987;
republished below in full unedited for informational, educational and research purposes:
Reza Aslan, the former CNN star who ate human flesh and two days ago tweeted that a presidential advisor should be “eradicated,” escalated his rhetoric on Sunday and called for the eradication of Trump supporters.
Aslan, a Sufi Muslim, has expressed a desire to harm others on Twitter for some time, yet the social-media giant has not banned or suspended the leftist Iranian immigrant.
A university professor who purports to be an expert on religion, Aslan lost his gig on CNN two years ago after a particularly vile tweet about President Trump.
The Tweet
Responding to Saturday’s mass shooting in El Paso, Aslan tweeted the following call for the mass murder of Trump supporters:

Hours before that, he tweeted that top presidential adviser Kellyanne Conway must be “eradicated” after she posted this sentiment:

We need to come together, America.

Finger-pointing, name-calling & screaming with your keyboards is easy, yet...

Working as one to understand depraved evil & to eradicate hate is everyone’s duty. Unity.
Let’s do this.
— Kellyanne Conway (@KellyannePolls) August 4, 2019

Repairing to his keyboard to scream, Aslan, who famously consumed human brain tissue on his CNN program True Believer, answered with this implied threat:

The following morning, Aslan tweeted this:

The President is a violent hate leader who daily promotes terrorism against Americans who look like me and my children, so if you’re someone who thinks I should “watch my language” in responding to this racist pig you can go fuck yourself too.
— Reza Aslan (@rezaaslan) August 5, 2019

Lost His Job at CNN
But advocating violence is nothing new for Aslan. After the media published an entirely false narrative about the confrontation between high-school student Nicholas Sandmann and “Native American elder” Nathan Phillips, Aslan tweeted this:

Honest question. Have you ever seen a more punchable face than this kid’s? pic.twitter.com/jolQ7BZQPD
— Reza Aslan (@rezaaslan) January 20, 2019

Sandmann supporters might have replied, “yes, yours,” but in any event Aslan’s inability to control his Twitter fingers cost him his job 2017.
CNN fired Aslan after he tweeted this about President Trump, whom Aslan thought tweeted a false report about the terror attack in London on June 3:
This piece of s**t is not just an embarrassment to America and a stain on the presidency. He’s an embarrassment to humankind.
Aslan later claimed he “lost my cool” and “that’s not like me,” but his Twitter followers quickly proved that the remark is exactly like him. This is what he tweeted about Trump about a month before the terror attack:
Oh the joy when that lying, conniving, scumbag, narcissistic, sociopathic piece of s**t fake president finally gets what’s coming to him.
On October 21, 2016, he told conservative Dinesh D’Souza to “go f**k yourself, you adulterous piece of s**t felon.”
He also called Fox talker Sean Hannity a “piece of s**t.”
Those tweets are no longer available.
Biden Joins In
Sadly, former Vice President Joe Biden, who knows better, joined Aslan, albeit without the obscenities, in speaking with CNN talker Anderson Cooper.
“This is a president who has said things no other president has said since Andrew Jackson,” Biden falsely claimed, ignoring the record of fellow Democrats Lyndon Johson and Woodrow Wilson. Biden continued:
We went through this before in the ’20s with the Ku Klux Klan and 50,000 people walking down Pennsylvania Avenue in their hats and robes because they decided they didn’t want Catholics coming into the country. We went through it after the Civil War in terms of the Ku Klux Klan and white supremacy. This is about separating people and the good and bad in his mind. It is about making — it is about access to power. It is a trait used by charlatans all over the world, divide people, divide them and pit them against one another.
Replied Cooper, “If that is the case, I mean, it is a very dangerous game then that he is playing.”
“There is no question it’s a dangerous game,” Biden replied.
Biden did not, apparently, comment on how dangerous it is for university professors to suggest the eradication of the Americans who voted for Trump or wear MAGA hats.
_______________________________________________________________
SEE ALSO:
https://www.jihadwatch.org/2019/08/cnns-islamic-terror-fan-reza-aslan-says-all-trump-supporters-are-terror-supporters
https://www.jihadwatch.org/2019/08/reza-aslan-calls-for-genocide-says-trump-supporters-must-be-eradicated

Posted by John at 1:10 PM Links to this post

TRUMP IMPOSES FULL EMBARGO ON VENEZUELA
IN EFFORT TO REMOVE MADURO
BY BOB ADELMANN
SEE: https://www.thenewamerican.com/world-news/south-america/item/33048-trump-imposes-full-embargo-on-venezuela-in-effort-to-remove-maduro?vsmaid=5505&vcid=3987;
Posted by John at 12:46 PM Links to this post

WORLD GOVERNMENT SUMMIT-BEHIND THE DEEP STATE
In this episode, host Alex Newman brings attention to the annual global summit which takes place in Dubai. The event refers to itself as “a global platform dedicated to shaping the future of governments worldwide.” Though it identifies from a “neutral” standpoint and as a place for “collaborations” to take place, Newman looks behind the curtain to see why we should be leery.