MORE CHRIST CENTERED
FREEDOM LOVING BRAVERY
SPOKEN IN 9 MINUTES THAN
100,000 PASTORS & POLITICIANS
IN THE LAST 25 YEARS
REP. MATT SHEA:
"WE STAND IN DEFIANCE OF TYRANNY";
"WE WILL RECALL THIS SHERIFF"
OUTSIDE SPOKANE SHERIFF'S OFFICE WHILE HE'S AWAY ON VACATION 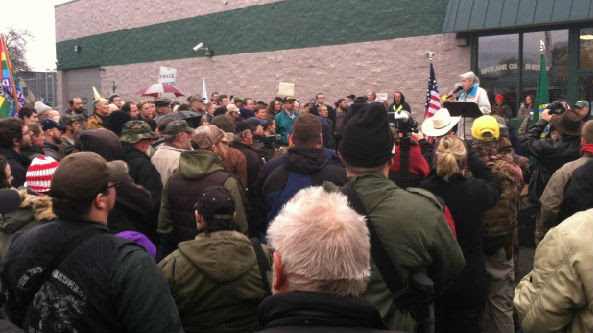 Washington state Rep. Matt Shea, R-Spokane Valley, speaks at a protest sparked by comments made by a deputy who said an armored vehicle is necessary for Constitutionalists with guns. He also called on Spokane County Sheriff Ozzie Knezovich to apologize, saying he should resign if he doesn't. According to organizers, over 400 people were at the event.
More on this story here: http://www.examiner.com/article/hundr...
Other stories by the Spokane Conservative Examiner can be seen here:http://www.examiner.com/conservative-...

AMERICANS STAND UP TO MILITARIZED TAKEOVER
IN SPOKANE WASHINGTON
JUNE 2, 2014:
SPOKANE'S "COMMANDER IN CHIEF" & "MORALS ENFORCER"
ISSUES "NO LIES, NO SEX ON DUTY" ORDER:
SEE: http://metrouk2.files.wordpress.com/2014/06/spokane-county-sex-problem.png;
KNEZOVICH: "WE HOLD OURSELVES TO AND ACKNOWLEDGE THAT WE ARE TO BE HELD TO HIGHER STANDARDS":